Update February 14, 2018 — According to the Treasure Valley ACT for America chapter, Redman plans to present his anti-Sharia bill at a public hearing on Thursday, February 15. ACT circulated an email to its supporters on February 13, stating, “Time has come!! Rep. Eric Redman will be presenting HB 419 — Idaho Laws for Idaho Courts — At a public hearing this Thursday morning at 8 a.m. This will take place in room EW40, the House state affairs meeting room"

On January 26, Rep. Eric Redman of the Idaho State House of Representatives introduced anti-sharia legislation for the third consecutive year. Since 2010, 201 “anti-sharia” bills have been introduced in 43 states.

Anti-Muslim hate groups play an integral role in the introduction of anti-sharia bills and overhyping the nonexistent threat of “sharia law” in the United States.

Anti-sharia legislation is unnecessary and useless since the U.S. Constitution unequivocally denies authority to any foreign law. The true purpose of these bills is to vilify Muslims by aiding in the increase of anti-Muslim rhetoric.

Yerushalmi recognizes this and told The New York Times in 2011:

If this thing passed in every state without any friction, it would have not served its purpose. The purpose was heuristic – to get people asking this question, ‘What is Shariah?’

In order to get this legislation off the ground, groups known for peddling anti-Muslim hate like the Center for Security Policy (CSP), ACT for America and American Public Policy Alliance (APPA) foster relationships with elected officials. APPA continues to publish ALAC model language on its website.

And now, documents obtained by Hatewatch via a public records request reveal how deeply entrenched Rep. Redman is with these groups, despite their lengthy track record of bigotry. The results yielded 47 pages of email correspondence between Redman and anti-Muslim groups spanning a 15-month period from May 2016 to August 2017.

The emails detail that Redman worked with and was in regular contact with these groups regarding anti-sharia legislation. One of the individuals the Idaho state lawmaker collaborated with was Chris Holton of the Center for Security Policy (CSP).

Holton, who is based in New Orleans, travels the country on behalf of CSP meeting with lawmakers and encouraging them to introduce anti-Muslim legislation such as anti-sharia bills.

The emails also reveal Redman worked closely with the local Treasure Valley chapter of ACT for America, the largest anti-Muslim hate group in the country. Additionally, he was in communication with Stephen Gele, an APPA board member.

Redman introduced his first anti-sharia bill (HB 568) on March 3, 2016, less than two months after CSP’s Holton, along with anti-Muslim speaker Shahram Hadian, held an event at the Idaho capitol about the “threat of Jihad” that demonized refugees resettling in Idaho. Sixteen lawmakers attended the event, according to The Spokesman Review.

When he introduced the bill into the state legislature, Redman specifically cited a report by CSP as his justification and passed out materials from APPA’s website. “This bill isn’t about Shariah law, but Shariah law is a major concern,” he told his fellow lawmakers.

Two months later, on May 23, 2016, Holton emailed Redman about getting ahead in the 2017 legislative session. He wrote, “I wanted to reach out to you to get an early start on preparing for the effort to pass American Laws for American Courts in Idaho … I am authorized to make a special trip to your area to meet with you over the summer…” Redman responded positively with dates of availability.

According to emails, Holton caught up with Redman at the American Legislative Exchange Council’s (ALEC) 2016 conference, which took place July 27 through 29. ALEC is a controversial and highly secretive group of state legislators and business lobbyists founded by far-right activist Paul Weyrich, who also helped create Pat Robertson’s anti-LGBT organization, the Christian Coalition.

On August 31, 2016, Holton followed up with Redman, writing, “As we discussed briefly at the ALEC conference, I will be attending the CSG [Council of State Governments] -West conference next week. My top priority during that time is to start the ball rolling to support your efforts for the 2017 legislative session. My secondary priority is to make new contacts among attendees.”

The CSG West conference is a convening of all three branches of state-level government across 13 U.S. states and three U.S. territories.

Redman responded encouragingly the same day, “I imagine you might be getting in late on the 5th; if earlier maybe I can treat you to a boat trip on Lake Pend Oreille at Sandpoint and we can discuss ALAC there.”

On November 23, 2016, Warren Grover, who co-leads ACT for America’s Treasure Valley chapter, wrote to Redman asking if he was going to “propose this legislation in the upcoming session.”

Redman responded to Grover in the affirmative, “Yes, I plan to bring the same bill forward; which I prefer to call Idaho and American Laws for Idaho Courts.” 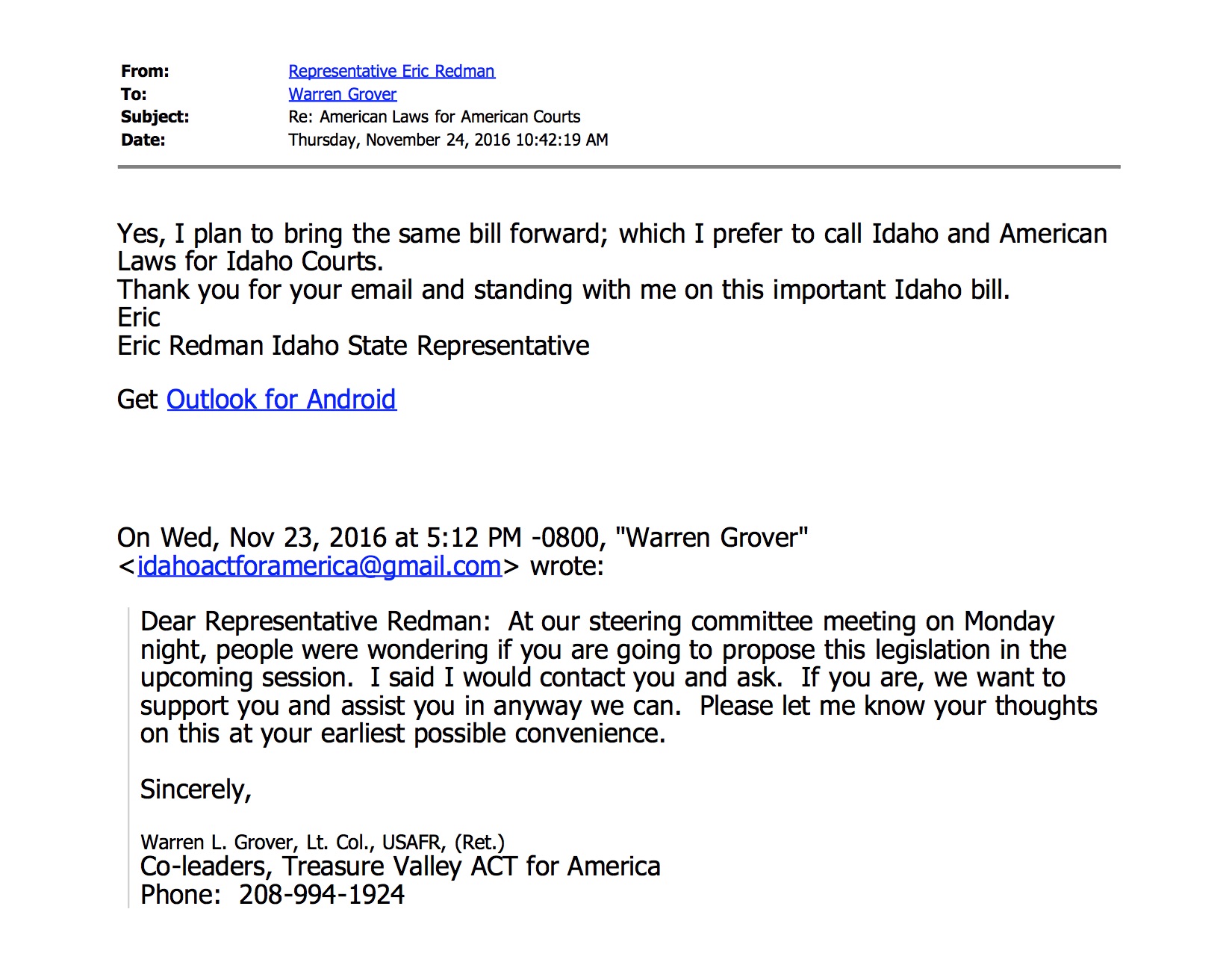 As Hatewatch has previously reported, to avoid being rejected on constitutional grounds, these bills typically include the phrase “foreign law,” and infrequently use the phrase “sharia law.” (This includes Redman’s 2018 version of the bill which makes no mention of sharia law but includes “pictures of a severed hand and a man about to be beheaded in between definitions of sharia law in his materials about the bill,” according to the Associated Press.)

Grover later wrote to Redman on November 24, 2016 with concerns that then-State Republican Senator and majority leader Bart Davis would stand in the way of the passage of this bill.

He asked, “Do you think his being on UN committees has any bearing on his being difficult on this issue?”

Redman responded, “Warren, I can believe that.”

Skepticism of the UN and belief that the body holds the ability to usurp the Constitution is a common right-wing conspiracy theory. 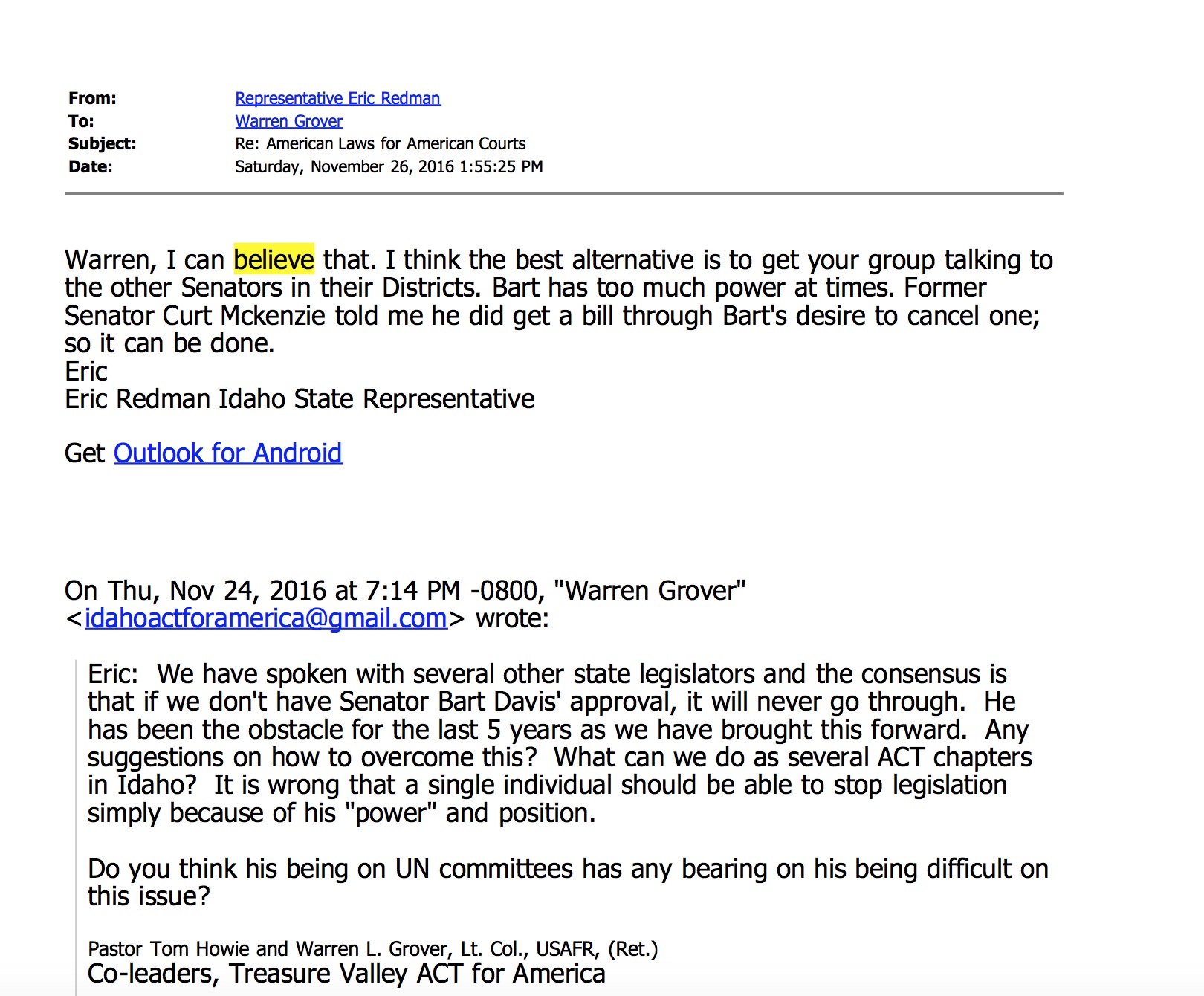 On November 26, 2016, Grover wrote to Redman about meeting an ACT for America chapter member, controversial writer Kelly Nielson, who he contends “lived under Sharia law as a non-Muslim before she managed to escape with her daughters and return to Idaho.” Redman replied he was interested in meeting her because “it sounds as if she would add more local credibility to the bill.” Nielson is a regular speaker at conservative events and on talk radio. However, she has expressed anti-Muslim sentiment, including pushing the conspiracy theory that Muslims “engage in Taqiyya and lie to non-Muslims to advance Islam.” She is also a supporter of anti-sharia legislation and laments that there are supposedly “some liberals who submit to sharia law in this country- their reason for doing so is ‘respecting their culture.’”

According to emails, Grover went on to facilitate meetings between Redman and Nielson.

Grover then thanked Redman on December 3, 2016 for hosting the meeting with Nielson. In the same email, he passed along resources from The Treasure Valley Refugee Watch Committee, an anti-refugee committee made up of local ACT members. Grover also directed Redman to check out the anti-immigrant group Federation for American Immigration Reform’s (FAIR) website as well Refugee Resettlement Watch, an online activist hub run by well-known anti-refugee blogger Ann Corcoran.

Indeed, it appears Sen. Davis did get in the way of the legislation by not getting on board with it. In an earlier email, Grover wrote he was concerned that “if we don’t have Senator Bart Davis’ approval it [ALAC] will never go through.” Thus, Grover set about drafting a letter criticizing Davis and accusing him of covering for sharia law.

On December 28, 2016, Grover sent Redman an email asking, “Do you think this (attached letter) would do any good to send to the newspapers around the state, particularly in the area of the district where Bart Davis is senator?”

The attached letter details Davis’s membership to the National Conference of Commissioners on Uniform State Laws (NCCUSL), which is part of the United Nations. The letter alleges that the UN “NGO” Davis is part of “means the US and all states are subject to international law under this treaty.”

It further laments Davis hasn’t helped pass any legislation “to stop the creeping spread of Islam and Sharia law that is becoming pervasive in our country.”

Finally, the letter says members of ACT for America and attorneys from the Center for Security Policy have met with Davis who has not been receptive. “Senator Davis has helped pass legislation bringing Idaho under international law; is he trying to do the same for Sharia?” the letter asks.

Redman responded the same day, “You know Warren, you have a well written letter. Now will it make him bow his head to this legislation even more; who knows. He has been an obstacle to several [pieces of] good legislation; but who knows maybe some of the other Idaho Senators will read your letter and decide to not be ‘Mary’s little lamb’. Your letter; your choice.”

That same day, Redman wrote Holton and Stephen Gele of APPA, asking “…are there any other states that have passed bill versions similar to this since 2015 and are there more known Shariah Law privileged cases over our Constitutional laws since the “Center for Security Policy” printed their December 2014 “Shariah in American Courts”…”

Holton responded February 6, 2017, citing the ALAC bills in Arkansas and Montana. Redman did not receive a response to his question on cases when sharia law superseded the U.S. Constitution and was similarly unable to answer this question in January 2018 when Democratic Rep. Elaine Smith asked for examples.

On February 4, 2017 Grover and Pastor Tom Howie, co-leaders of the Treasure Valley ACT chapter, wrote to Redman explaining they have been speaking with legislators and petitioning to pass this legislation.

The petition named HB 94 (the last iteration of the bill Redman introduced) as “American and Idaho Laws for Idaho Courts” and cited a study by Center for Security Policy. The next week, Redman wrote to Grover explaining he had received a “25 page brief with footnotes for our model bill,” from Stephen Gele.

Despite the two previous failures, Redman is hoping that 2018 will be third-time lucky for his anti-sharia bill. On January 26, he introduced HB 419.

And to this day he continues to coordinate with anti-Muslim hate groups. Tomorrow, February 13, he will be the guest speaker at ACT Treasure Valley’s next meeting.