Well before any motive or suspect was announced in Thursday’s mass shooting at a Maryland newspaper, racist "alt-right" figure Milo Yiannopoulos was already playing defense about comments he recently made saying he was looking forward to vigilantes “gunning journalists down on sight.”

The former Breitbart editor published a pair of Instagram posts on June 28 after the killings of at least five people and woundings of multiple others at the Capital Gazette newspaper in Anne Arundel County, Maryland. In those posts, he said that his earlier comments were simply “a troll” and predicted that he would be blamed for the killings. He also said that if any aspect of the shooting turned out to be tied to his remarks, the fault would be with the journalists who reported his quotes in the first place. He added: “I regret nothing I said.”

“I sent a troll about ‘vigilante death squads’ as a private response to a few hostile journalists who were asking me for comment, as a way of saying, ‘F--- off.’ They then published it!” Yiannopoulos wrote in a post on Instagram that included a photo of him shrugging his shoulders with a gun on his lap. “Amazed they were pretending to take it as a ‘threat,’ I reposted their stories here to mock them — and make it clear that I wasn’t serious.” 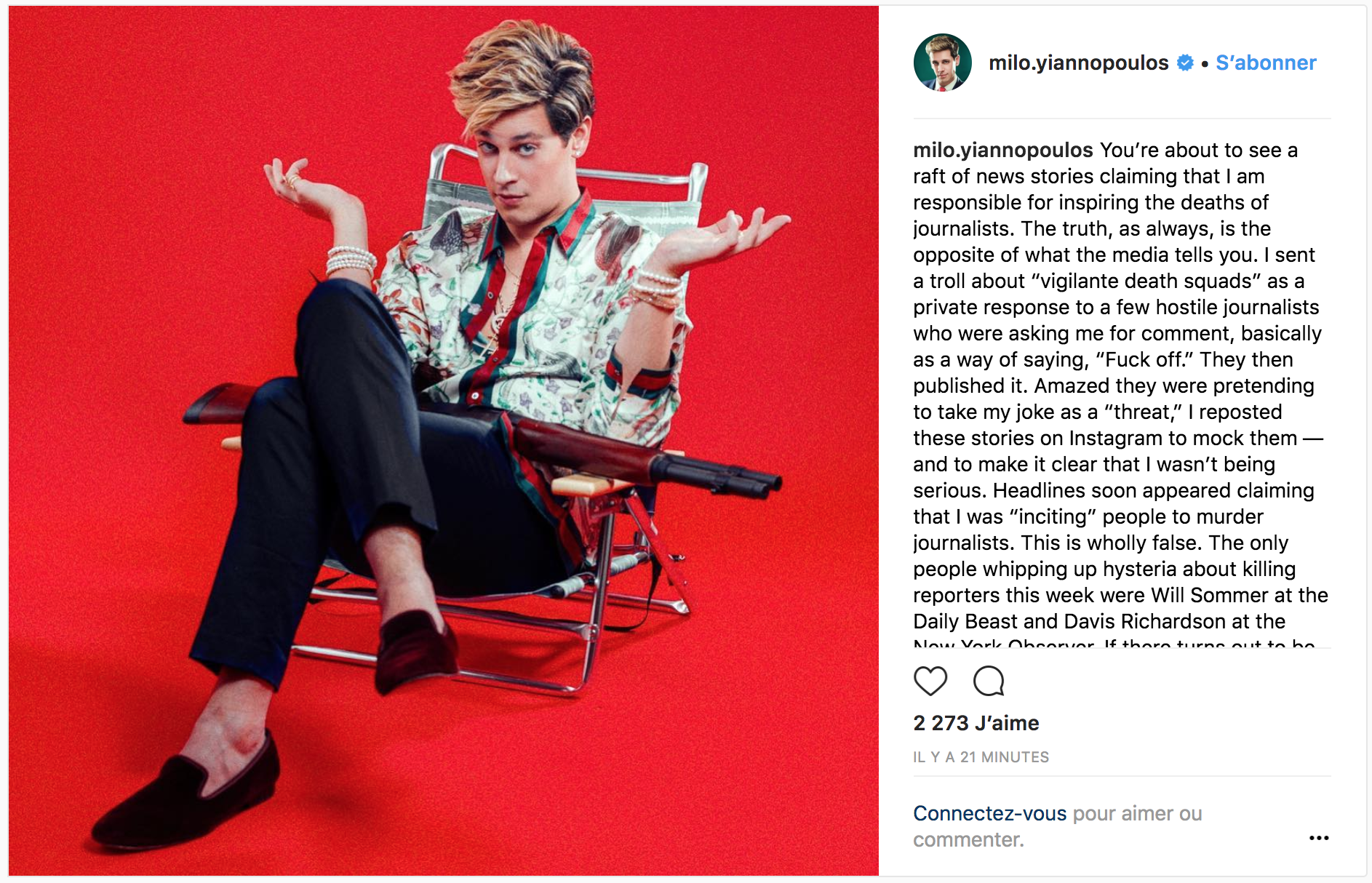 Yiannopoulos’s comments about “gunning journalists down” were first published earlier this week by The Daily Beast and the New York Observer.

The first quote was published by The Daily Beast on June 26 as part of an article that mentioned Yiannopoulos had joined the far-right U.K. Independence Party. Asked by the reporter about his membership, Yiannopoulos reportedly replied in an email: “can’t wait for the vigilante squads to start gunning journalists down on sight!”

The Observer reported later the same day that Yiannopoulos made a similar comment in a text message when asked about Manhattan restaurant where he’d dined: “I can’t wait for the vigilante squads to start gunning journalists down on sight.”

Law enforcement had released only bare details of the newspaper killings when Yiannopoulos took to Instagram about the matter. There was no indication of the shooter’s name or motive. Still, a number of Twitter users had already brought up his remarks in light of the shooting.

“The bodies are barely cold but journalists are already exploiting them to score political points against me. It’s disgusting,” Yiannopoulos wrote in his second Instagram post about the shooting, which featured a photo of him posing with a gun in his hand. “I regret nothing I said, though of course like any normal person I am saddened to hear of needless death.”

Yiannopoulos, who was banned from Twitter in 2016 after leading a harassment campaign of Ghostbusters actor Leslie Jones, said on Thursday following the shooting that he had been suspended from the financial transaction sites Venmo and PayPal. The notice he shared from Venmo said he was banned “because safety is Venmo’s number one priority.” The notice he shared from PayPal said it was “due to the nature of your activities.”

Last week, Yiannopoulos used PayPal to attempt to troll a Jewish journalist by sending her $14.88. The number 1488 is a popular hate symbol in white supremacist and neo-Nazi circles — 14 is used to represent the “14 Words” mantra about securing “a future for white children,” while 88 is a shorthand for “Heil Hitler,” the letter H being the eighth letter of the alphabet.