The far-right provocateur tells reporters he hopes angry conservatives start assassinating them, and the alt-right '14/88ers' love the idea.

Apparently, Milo Yiannopoulos didn’t get the memo about the need for civility in our discourse.

“I can’t wait for the vigilante squads to start gunning journalists down on sight,” the far-right provocateur texted a reporter for the New York Observer this week. When the reporter inquired further, Yiannopoulos explained that he had simply issued his “standard response to a request for a comment.”

But this wasn’t simply a toss-off remark. Yiannopoulos appears to be dead serious – that is, he sincerely believes that right-wing assassins should begin taking out targeted reporters. He’s been saying so on a number of forums, and it’s clear that he isn’t being simply “ironic” in the classic alt-right hall-of-mirrors fashion.

Yiannopoulos’ career has been in precipitous decline over the past year, following his sudden rise to media stardom as a leading figure in the alt-right, due largely to his influential role during the “Gamergate” controversy, then as an editor at Breitbart News. However, after an interview surfaced in February 2017 which he suggested sexual relations between adult men and young boys could be beneficial, he lost his sponsorship by the Mercer family, was dropped by his publisher, and resigned his position at Breitbart. Then in October, his close dalliances with white nationalists while at Breitbart (including an evening of karaoke with Richard Spencer) were exposed by Buzzfeed.

Since then, Yiannopoulos has tried to keep his career as an “alt-lite” pundit afloat through a number of ventures, even as his social media profile has risen and fallen. A speech in Arizona was shut down, ostensibly over death threats, causing his followers to plot revenge against his critics. He was also invited to speak to an audience of far-right anti-immigrant activists in Hungary in May 2018. He has spoken at a handful of campuses, including at Cal Poly in April, and also toured Australia in late 2017.

He’s also edged closer to making “ironic” signals in the direction of the racist alt-right, notably by donating $14.88 – an amount identical to the numbers used to signal the overt neo-Nazi faction of the alt-right – to a Jewish journalist who had pleaded for financial help in an online fundraiser.

His most recent venture has involved participating in a “soft coup” in his native England, a takeover of Nigel Farage’s floundering right-wing United Kingdom Independence Party (UKIP) by members of the “alt-lite” brigade. Along with Infowars reporter Paul Joseph Watson, YouTube personality “Count Dankula” (real name: Mark Meechan), and  Carl Benjamin, aka “Sargon of Akkad,” another YouTube personality, the faction wants to “Make Britain Great Again” by taking over the UKIP leadership and making the party a safe space for the like-minded.

When Guardian reporter Will Sommer asked Yiannopoulos about his decision to join UKIP, he responded by email that he “can’t wait for the vigilante squads to start gunning journalists down on sight!”

Since then, he has doubled down on his call for violence against journalists. On Instagram, he responded to a similar query from Mediaite reporter Amy Russo with a post that has since been removed. 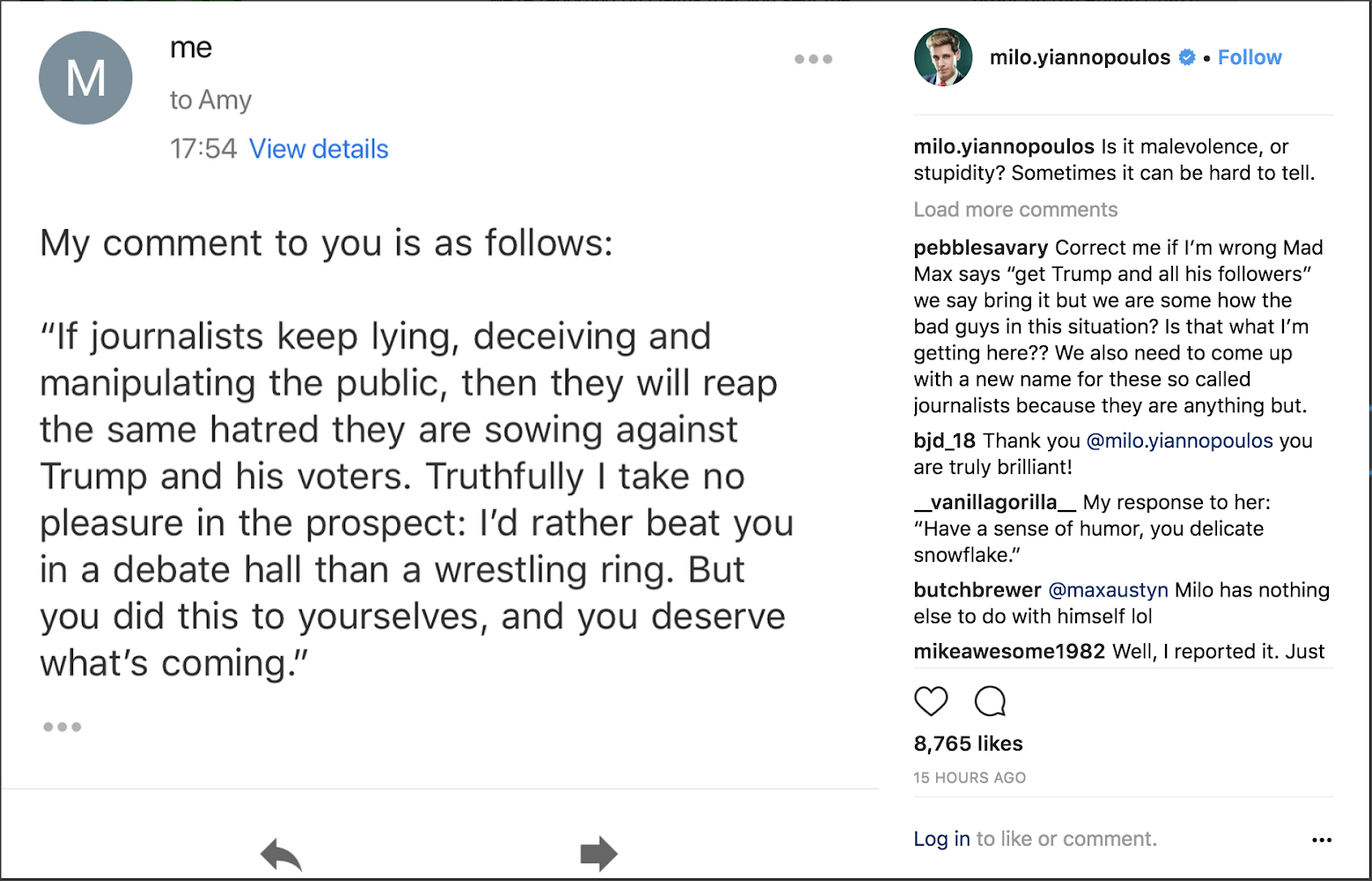 “If journalists keep lying, deceiving and manipulating the public, then they will reap the same hatred they are sowing against Trump and his voters,” he wrote. “Truthfully I take no pleasure in the prospect; I’d rather beat you in a debate hall than a wrestling ring. But you did this to yourselves, and you deserve what’s coming.”

In a comment, he added: “Is it malevolence, or stupidity? Sometimes it can be hard to tell.”

Andrew Anglin, the neo-Nazi editor of the Daily Stormer, was especially pleased. He wrote that “killing journalists is an awesome position to promote,” and that doing so might successfully rebrand Yiannopoulos: “Now that is a sentiment I can get behind.”

Anglin noted that the idea may have come from a June 2017 Los Angeles Times piece quoting “comedian” Sam Hyde, who had contributed money to the Daily Stormer and explained it in a phone interview: “Don't worry so much about money. Worry about if people start deciding to kill reporters. That's a quote. … For the reason why, you can say I want reporters to know I make more money than them, especially Matt Pearce [the reporter on the piece].”

“Sam was cleverer, as MILO’s statement could be construed as a threat,” Anglin wrote. “But who cares? Definitely not my problem. And it’s funny.”

“Anyway, whatever – anyone calling for journalists to be killed is good,” he concluded.

Violence has accompanied Yiannopoulos at a number of steps in his career, notably during his 2016-2017 “Dangerous F-----” speaking tour. At the University of Washington in Seattle on the night of January 20, 2017 – the evening of Donald Trump’s inauguration as president – a man involved in protests outside a Milo speech was shot by a couple of angry alt-right activists; they are both still awaiting trial. A speech in Berkeley shortly afterward was canceled due to threats of violence from both sides, provoking threats from Trump on his Twitter account. Yiannopoulos later vowed to organize a “free speech week” protest in Berkeley, but it later devolved into a single brief appearance by the provocateur in the college town.