A storm involving more legal trouble could be brewing for Veterans on Patrol leader Michael Meyer, who’s been at the center of a Pizzagate-style conspiracy theory for several weeks.

The head of the Arizona vigilante group was arrested Sunday, July 8, near Tucson on suspicion of felony trespassing. But a spokesman for the Pima County Sheriff’s Department told the Southern Poverty Law Center on Wednesday that investigators are also looking into “multiple other incidents” involving Meyer and his crew.

“The detectives are still actively working other sources and other leads from the investigation,” Deputy Daniel Jelineo said. Some of that, he added, includes potential evidence from Meyer’s prolific posts on social media.

Meyer, who commonly goes by the name Lewis Arthur or sometimes the nickname “Louie Prepper,” has been involved in antigovernment activities for years. He went to Bunkerville, Nevada, in 2014 as part of a standoff between the Bundy ranching family and federal officials. He also made a brief appearance at the Malheur National Wildlife Refuge in Oregon in 2016 when members of that same family helped lead an armed occupation of federal facilities there. 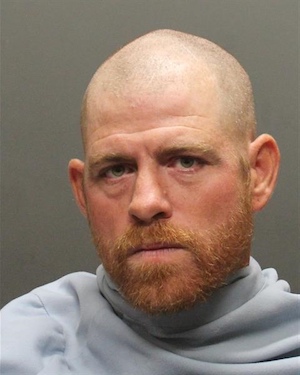 In recent years, Meyer, who is not a military veteran himself, also helped found Veterans on Patrol, a group whose main purpose claims to be housing and helping homeless vets without taking any federal assistance. The group has set up tents on private property next to railroad tracks in Tucson and Meyer says the group uses the location to house a mix of veteran and non-veteran homeless people.

While some of Meyer’s past activities have drawn their share of attention, none compares to his latest stunt, which has made him a minor celebrity for a legion of online conspiracy theorists — and landed him in jail this week.

Several weeks ago, Meyer took to Facebook claiming he and his group had uncovered evidence of a “child sex camp” on the grounds of an abandoned industrial site in Tucson. Meyer gave his amateur investigation the nickname “Operation Backyard Brawl.” Authorities who investigated the site, however, determined that what Veterans on Patrol had discovered was likely just an abandoned homeless camp. There was no evidence to indicate child sex trafficking had taken place there, police said.

Meyer was convinced otherwise. He posted numerous videos to Facebook in which he sometimes claimed he was on a mission from God and other times cursed into the camera with spittle flying from his mouth. He quickly earned himself an audience of tens of thousands of viewers, many of whom were true believers in some of the internet’s most outlandish conspiracy theories such as Pizzagate and QAnon. Both theories operate loosely on the idea that there are vast pedophile rings being run by some of the world’s biggest politicians and businessmen. The latter of those theories also includes the idea that something called “The Storm” will be unleashed to put a stop to it all.

Some of Meyer’s biggest fans online have shown they believe he and Veterans on Patrol are part of “The Storm.”

His fans cheered him on when he and his group locked the gates to the former industrial site and declared a “standoff” with local police in early June. And they stuck with him even after the police managed to coax him and his group away from the site.

His fans continued to celebrate as he took things in a different direction and started trekking through the desert near Tucson looking for any possible evidence of child sex trafficking. When he posted photos of trash and other debris, his followers saw the items as something far more nefarious than litter.

When Meyer’s group found a human skull during one of their excursions, Meyer claimed it was that of a child. When the county medical examiner determined it was that of an adult and the sheriff's office noted it was found in an area of the desert where the bodies of migrants were sometimes found, his fans saw that as more evidence of a government cover up.

Veterans on Patrol has reaped the rewards of conspiracy theory stardom, too. Meyer hasn’t been shy about posting photos and videos of piles of donated packages and gift cards his group has received from strangers online.

The adulation from the conspiracy community has been so strong at times that Meyer has even adopted its rhetoric.

On Tuesday, July 10, a post on the group’s Facebook page made it clear: “The Storm is not what is attacking us, the Storm is us pushing through the attacks.”

The group has also posted links to websites like The Daily Sheeple (yes, that’s really the name), which promotes conspiracy theories about the New World Order and warns people about the dangers of vaccines.

But while the Facebook and YouTube videos posted by Meyer have earned him fans and donors, they’ve also apparently become part of the investigation into Meyer’s alleged crime.

“Our detectives have been investigating the social media aspect of this for quite some time,” Jelineo, the Pima County sheriff’s deputy, told the SPLC.

Another official with the sheriff’s office told Tucson TV station KVOA this week that videos posted online by the group “proved to be very helpful” in developing probable cause to arrest Meyer on Sunday.

Jelineo said that detectives have been investigating Meyer’s activities since he and his group occupied the former industrial site in early June.

But Meyer’s arrest on Sunday doesn’t appear to involve the site where “Operation Backyard Brawl” began. Jelineo told the SPLC that Meyer’s suspected trespassing took place in the 21000 block of West Manville Road, near the town of Marana. That location is about 30 miles from where Meyer and his group claimed to have found the “child sex camp.”