The era of Donald Trump unleashed an onslaught of candidates for office who court hate and extremism.

Not all made it to the general election, but some races Tuesday featured candidates with open white supremacist, nativist and anti-LGBT ties. This is the first in a series exploring whether candidates with extremist ties won in elections across the U.S.

Here’s how those candidates fared with voters in races for seats in the U.S. Senate:

Kevin Cramer was elected to his first term in the U.S. Senate, beating incumbent Heidi Heitkamp. Cramer was endorsed by anti-LGBT group Public Advocate for the United States. Cramer filled out the group’s survey and received a 100 percent rating. The survey included questions like, “Should public schools be ‘prevented from brainwashing elementary school children with the Homosexual Agenda?’.” Cramer has also appeared on the radio program of anti-LGBT hate group the Family Research Council. The show, Washington Watch, is hosted by FRC president Tony Perkins. 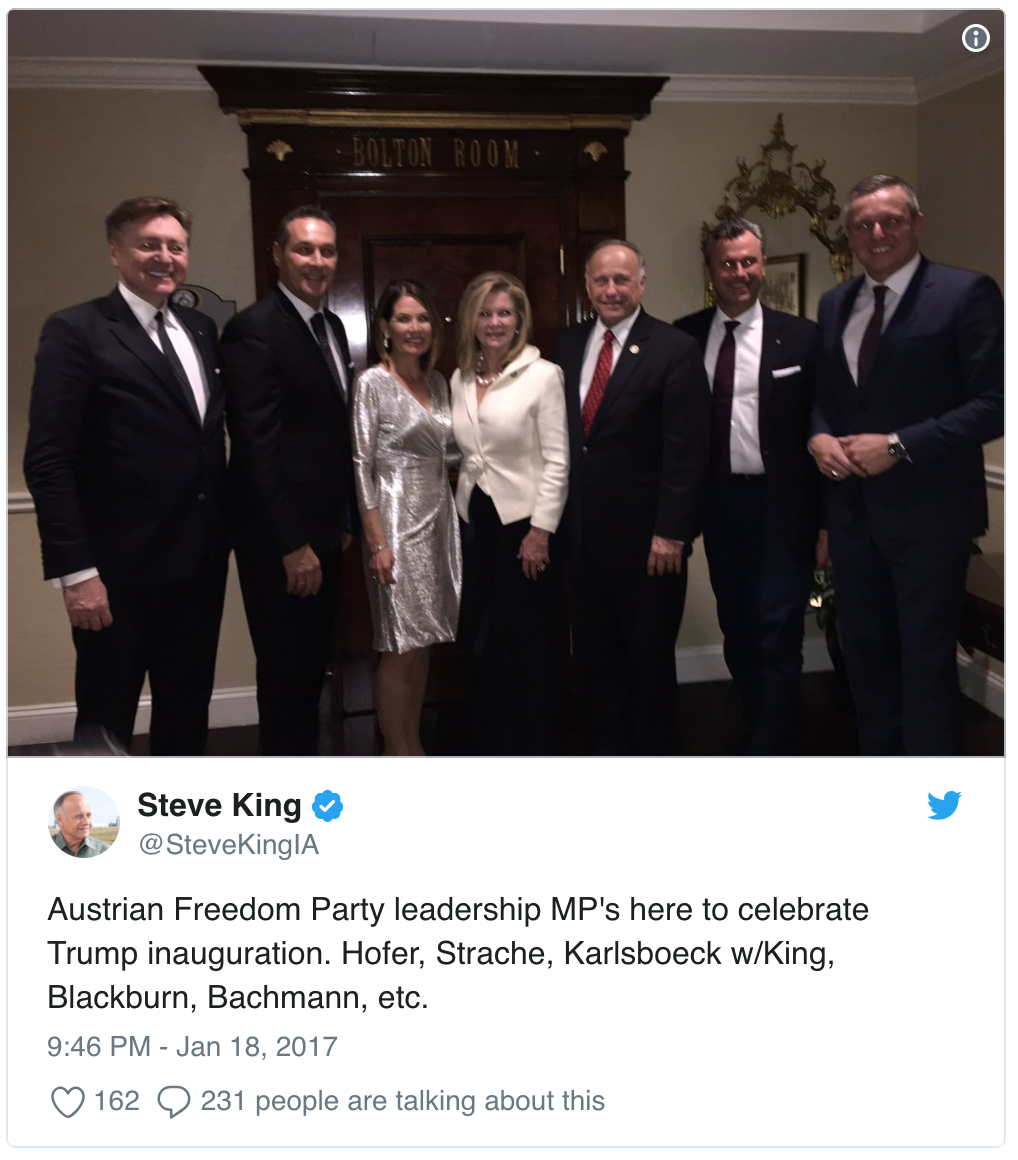 Screenshot of a photo posted on Steve King's Twitter account showing him celebrating President Trump's election with Marsha Blackburn and members of the Freedom Party of Austria, founded by a former SS officer.

Marsha Blackburn was elected to her first term in the U.S. Senate. She previously represented Tennessee’s 7th District in the U.S. House of Representatives. Blackburn was listed as a confirmed speaker at the Restoration Conference hosted by anti-Muslim hate group David Horowitz Freedom Center. An aide for Blackburn said she didn’t attend the conference. Blackburn has received an award from anti-Muslim hate group Act for America. In 2017, Blackburn celebrated Trump’s inauguration with Iowa Representative Steve King, who has well documented sympathies with racist ideas, and members of the Freedom Party of Austria, a political party founded by a former officer of the Nazi SS in the 1950s.

Ted Cruz was elected to his second term in the U.S. Senate. During his failed 2016 campaign for presidency, Cruz dog-whistled to the antigovernment extremist movement when he released an ad vowing to remove federal stewardship of all public lands in Nevada, the state where the Bundy family’s now infamous Bunkerville standoff took place. Cruz was widely supported by antigovernment extremists during his primary campaign, and in 2013 Cruz spoke at a Tea Party rally and was photographed speaking in front of an Oath Keepers flag. During his 2016 presidential bid, Cruz repeatedly courted anti-LGBT hate groups.

Josh Hawley was elected to his first term in the U.S. Senate. Since 2017, Hawley has served as Missouri’s Attorney General. While a professor at the University of Missouri, Hawley spoke at a leadership conference hosted by hate group Alliance Defending Freedom (ADF). Since 2013, Hawley and his wife have earned $8,700 from ADF.

Shiva Ayyadurai, who ran as an Independent, came in third in the Massachusetts Senate race behind winner and incumbent Elizabeth Warren and Republican Geoff Diehl. Ayyadurai spoke at the Boston Free Speech rally in 2017. The original list of speakers at that rally included Fraternal Order of Alt-Knights founder Kyle Chapman. This year, Ayyadurai was scheduled to speak at an event put on by the Proud Boys that was also supposed to feature Chapman. Ayyadurai also produced pins for his campaign featuring the word “Groyper,” a reference to an alt-right favorite meme derived from Pepe the Frog. In May, he went on a podcast that regularly features leaders in the racist "alt-right." On the same episode that featured Ayyadurai, neo-Nazi Patrick Little was also brought on for an interview.

Jim Newberger lost the race for Senate to incumbent Amy Klobuchar. Newberger has trafficked in anti-Muslim rhetoric, saying he wants to stop refugees from entering Minnesota because the state could be put under Sharia law. He also warned that “no go zones” could be instituted in the state. “No go zones” are a myth used to incite fear of American Muslims.

Danny Bedwell came in third in the race for Mississippi Senate behind the winner, Republican Roger Wicker, and second-place Democrat David Baria. On the campaign trail, Bedwell deployed antigovernment rhetoric that accused the federal government of unlawful tyranny. He described himself as a “constitutional scholar” and said he was running for office to stop the government from infringing on the U.S. Constitution. He was endorsed by the Constitutional Grassroots Movement, which advocates for the “planned, intentional, and strategic transfer to the States or to the People, the responsibility of all powers and rights that the federal government has usurped and stolen.”

Lost in the so-called “jungle primary” with 16.4% of the votes

Chris McDaniel lost in the so-called “jungle primary” and will not advance to the Nov. 27 runoff election for Senate in Mississippi. McDaniel, a former Mississippi state representative, has promoted a neo-Confederate hate group and has pushed the Lost Cause narrative. On the website of his former podcast, McDaniel lists neo-Confederate hate group League of the South as a favorite website. In August 2018, McDaniel spoke to the Citizens Militia of Mississippi, an antigovernment group, and defended Confederate general Robert E. Lee, saying liberals are judging him harshly.

Kamaku Bakari came in sixth in the race for Nevada Senate, behind the winner, Democrat Jackey Rosen, runner-up Republican Dean Heller, no-party candidate Barry Michaels, Libertarian Tim Hagan, and the 1.6% of ballots marked with no candidate. The homepage of Bakari’s website features a video showing him and antigovernment icon Cliven Bundy challenging former Attorney General Eric Holder to come to Nevada to talk about race. In the video, Bakari says Bundy is brave for being politically incorrect.

Jim Renacci lost the race for Senate to incumbent Sherrod Brown. Renacci has attended anti-immigrant hate group Federation for American Immigration Reform’s annual “Hold their Feet to the Fire” event, a yearly gathering of conservative talk radio hosts. Renacci has defended President Trump’s controversial and racist remarks about immigration, including his remarks about people coming from “shithole countries.” Renacci responded, “I've said all along the president many times says what people are thinking.”

Lou Barletta lost his bid for reelection to Democrat Bob Casey. Barletta has a long history of extreme views, rhetoric and policy. He once said he vowed to make Hazelton, Pennsylvania, “the toughest place on illegal immigrants in America.” In 2006, as mayor of that city, he passed the Illegal Immigration Relief Act, saying, “And I will get rid of the illegal people. It’s this simple: They must leave.” Even anti-immigrant hate group Federation for American Immigration Reform argued the act was too broad. In 2006 Barletta also did an interview with the American Free Press, a Holocaust-denying outlet founded by antisemite Willis Carto.

Tim Aalders came in third in the Utah Senate race behind the winner, Republican Mitt Romney, and runner-up Democrat Jenny Wilson. Aalders ran as a member of the Constitution Party — the most extreme far-right party in the U.S. The small third party has been around in one form or another since 1992. Its stated goal is “to limit the federal government to its delegated, enumerated, Constitutional functions.” In 2004 and 2008, the party ran antigovernment extremist Chuck Baldwin on its ticket, as a candidate for vice president and president, respectively.

Corey Stewart lost the election to incumbent Tim Kaine. Stewart previously served four terms on the Board of Supervisors in Prince William County, Virginia. Stewart took a hard line on Confederate monument preservation during his failed candidacy for governor in 2017. Members of the neo-Confederate hate group League of the South joined Stewart on the campaign trail. Stewart has ties to white nationalists, having made several appearances with Jason Kessler, the white nationalist who organized the deadly “Unite the Right” rally in Charlottesville. After the rally, during which an anti-racist demonstrator was killed, he chastised fellow Republicans for criticizing the white nationalists, saying violent people on the left were to blame for the violence.