The League of the South made a 25-second propaganda video over the weekend at the memorial of a civil rights icon in an apparent attempt to attract members to its neo-Confederate ideology.

Eight members of the hate group gathered Saturday in rural Tallahatchie County, Mississippi, at Graball Landing. Historians have said they believe the site is where Emmett Till’s body was recovered from the Tallahatchie River after his lynching in 1955.

League President Michael Hill, Mississippi chairman Shaun Winkler, Joel Price, William Collier and others gathered to film the video. The Jackson Free Press first broke the story Saturday after a representative from the Emmett Till Memorial Commission contacted the publication. 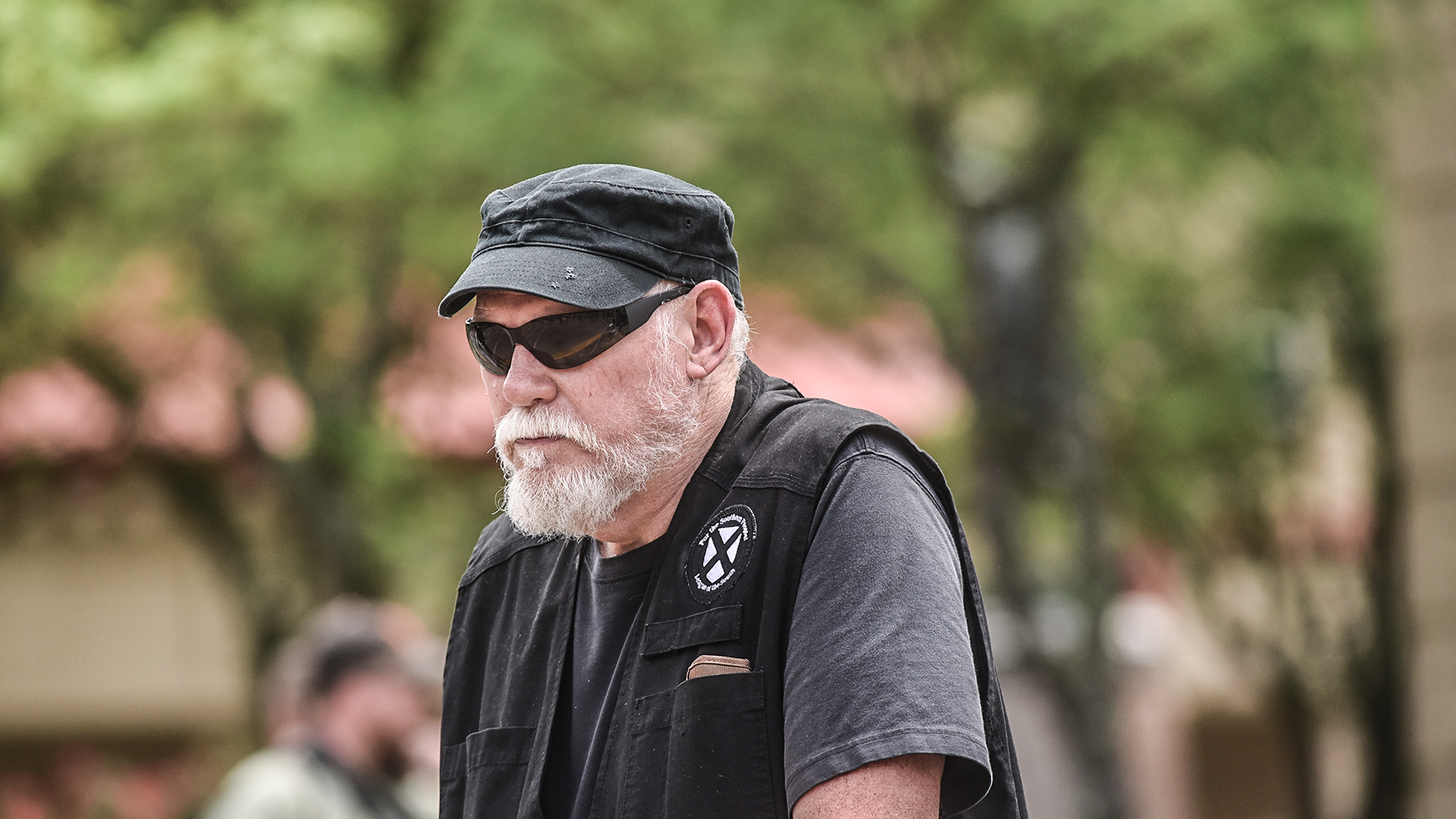 Michael Hill, the League of the South's president, has lamented the infighting within the neo-Confederate hate group. (AP Images/Brian Bohannon)

The league members, wearing their public uniforms of black polos, bomber jackets and khaki pants, emerged from two vehicles and tripped an alarm installed in October to discourage acts of vandalism that have plagued the memorial to Till, according to commission video that the Free Press posted. Video cameras at the site captured the league’s efforts.

“All right, who’s doing the video? … Let’s go!” Hill shouted at his cadre to begin filming as they milled between their vehicles and a sign commemorating the site. “Can you get – can you get the sound?”

The group stood in front of the sign, while Hill recited the discredited notion that African Americans have disproportionately “murdered, assaulted and raped” whites throughout American history. Within a minute of congregating around the sign, they scurried back to their vehicles.

Saturday’s incident apparently was intended to provide the league with a propaganda video that could draw recruits in the midst of declining numbers at events and internal squabbles that have left what was once the premier neo-Confederate hate group struggling to find a place in the movement.

The league, one of the most prominent groups during an intense spate of public activism by white nationalists from 2015 to 2018, was at the center of the so-called optics debate. The question was whether violent white nationalist rhetoric was a more viable recruitment strategy than using coded language and attempting to infiltrate the Republican Party.

Following an August 2018 rally in Johnson City, Tennessee, Hill and a group of league members filmed themselves burning a copy of the Talmud, “The Communist Manifesto” and an Israeli flag, further isolating themselves from those in the movement with more mainstream aspirations.

Subsequent rallies were sparsely attended, and in response, the league’s “PR chief,” Brad Griffin, announced in October 2018 that it would transition to “stealth activism,” with small groups showing up unannounced in a rural location for a photo opportunity before fleeing.

The first instances of this strategy in Livingston, Tennessee; Selma, Alabama; and Little Rock, Arkansas; were better attended than Saturday’s demonstration in Mississippi, with about 30 people posing for photos at each of those earlier sites.

On Sept. 9, roughly a week after the group held its first “national” conference since losing its traditional venue to infighting, Hill shared a post to Russian social media site VK.com lamenting divisions within the league.

One of the constant problems we face in The League is people making assumptions about other LS members without having all the facts. Remember, appearances can be deceiving. There may be more to the story than sometimes meets the eye. Unless you are sure of your facts, it is better to keep quite [sic] and not assume something to be true. We will not help ourselves if we spread false information or gossip, no matter how good our intentions.

Hill didn’t specify the nature of rumors swirling within the group’s ranks. The league appears to be wrestling with whether or not it should once again reverse course and attend pre-announced public rallies.

Jessica Reavis, a league officer from Virginia, and a handful of other members see the ongoing protests around a Pittsboro, North Carolina, statue dedicated to the Confederacy as an opportunity to recruit.

The league issued a public call for members to attend a planned rally in Pittsboro after Reavis was charged with carrying a concealed weapon and a concealed gun at an Oct. 5 protest in the town.

When the morning of Oct. 19 arrived, the league was nowhere to be seen. In a podcast with white nationalist Billy Roper, Reavis suggested that other Confederate heritage groups had dissuaded league members from attending because they feared being publicly associated with the league.

Nevertheless, Reavis’ overtures appear to have netted at least one success. A reported recruit said on social media that he “[m]et one of the national officers from Virginia and she was really cool and the organization seemed pretty straight forward so I joined up.”

In a post shared Sunday on the league’s website titled “League visits Emmett Till memorial …,” Hill indicated that the group will continue appearing at historically significant civil rights sites for the foreseeable future.

“Over the last year and a half, we have also done similar operations at the Edmund Pettus [B]ridge in Selma, Alabama, and Central High School in Little Rock, Arkansas,” Hill wrote. “Who knows where we’ll show up next on our continuing LS Civil Rights Tour?

Editor's note: This article has been updated to clarify that the League of the South filmed a video at a memorial marker to Emmett Till, not his gravesite.