Miller viewed the highly trafficked Breitbart as a way to promote his nativist, anti-immigration policies and to attack political enemies before millions of readers. And, while politicians and their staff commonly seek to influence news coverage, the dynamic on display in Miller’s emails to Breitbart suggests the conservative outlet was “not playing by the same rules that legitimate news organizations play by,” said Kyle Pope, editor-in-chief of the Columbia Journalism Review. 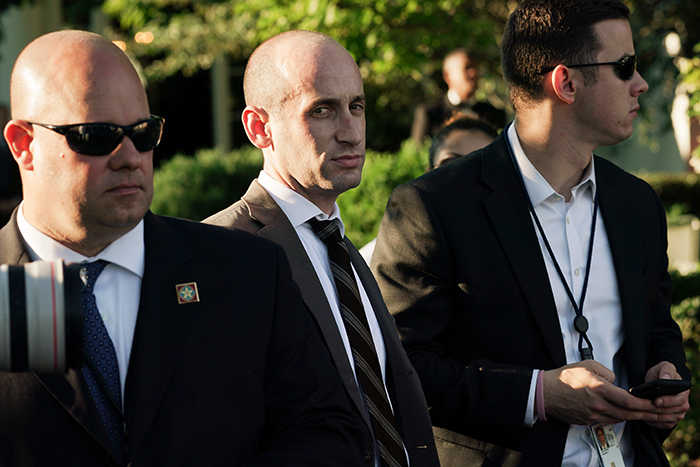 White House senior adviser Stephen Miller (center) is seen during a June congressional picnic on the South Lawn of the White House in Washington. (Photo by Alex Wong/Getty Images)

“This is not remotely how a professional news organization functions,” Pope told Hatewatch, regarding Miller’s often-direct editorial instructions. “What is scary here is Trump, and his team, and also Trump supporters – hold up this kind of cheerleading news organization as an example of how journalism should be done, and it’s clearly not.”

The emails examined by Hatewatch demonstrate a pattern of influence by Miller. On April 10, 2016, he sent an email with the subject line “aggregate?” to Breitbart with a tweet by conservative commentator Matt Drudge. In his tweet, Drudge questioned the integrity of Colorado’s Republican caucus system in which Ted Cruz won a majority of delegates and which Trump had criticized as being “rigged.” Breitbart soon turned Drudge’s tweet into the story Miller apparently envisioned, “Matt Drudge: ‘Hello Colorado Republicans, even Iraqis get a vote.’”

Breitbart editors introduced Miller to McHugh in early 2015 to help shape her journalistic output, she told Hatewatch. At the time, Miller was an aide to then-U.S. Sen. Jeff Sessions of Alabama. McHugh leaked to Hatewatch more than 900 of her previously private email conversations with the current White House senior adviser. In them, Miller appears to behave like an uncredited editor – periodically suggesting where stories should be placed on Breitbart’s homepage.

Miller suggested such a placement on the Hillary Clinton-focused story, “Donald Trump Slams ‘Heartless Hillary’ Clinton’s Soft-On-Crime Plans” in May 2016:

“Both as an aide to Sen. Sessions and an adviser to Trump, Stephen Miller frequently dictated the editorial direction of Breitbart News to me,” McHugh said. “No one at Breitbart ever raised a question about whether this was ethical.”

McHugh, who was fired from Breitbart in 2017, told Hatewatch she took her position there 10 months after graduating from college. At 23, McHugh said, she did not immediately comprehend the degree to which the website’s interactions with Miller might prove unusual by traditional journalistic standards.

McHugh told Hatewatch she did not remember being privy to an email discussion on Oct. 3, 2015, in which Breitbart agreed to publish a press release authored by Miller under the generic byline Breitbart News. Miller conversed with Breitbart Washington political editor Matthew Boyle in the email about how to apply a byline to the post. Then-Breitbart chief Steve Bannon, Sessions aide Garrett Murch, McHugh and three other Breitbart employees were copied on the email.

Miller, Oct. 3, 2015, 8:42 p.m. ET: “I think Breitbart News. Then it can be introduced as something shared exclusively with Breitbart by the Senate’s Subcomittee [sic] on Immigration and the National Interest, with the graphic and explanatory text underneath.”

Miller, Oct. 3, 2015, 8:47 p.m. ET: “Fantastic. I’ll be standing by to assist however I can. I think this is one of the best demonstrations we’ve come up with so far to demonstrate the true scope of immigration.”

Miller frequently suggested story ideas to Breitbart directly from Sessions’ office. In another example, Miller sent a July 6, 2015, email from his government address to McHugh and Boyle with the subject line, “illegal immigrant child sex offenders.” He attached a 19-page document labeled “Child Sex Offenders,” which he said was a list of undocumented people who were accused of child molestation and other abuses.

McHugh did not reply to Miller’s email about child sex offenders and told Hatewatch she did not remember whether or not she used the list.

Pope noted that Breitbart has lost readers since Trump took office, which the Columbia Journalism Review reported in August using data from the analytics company Comscore. Breitbart reached more than 12 million unique visitors per month at the time Trump declared his candidacy and had 18 million-plus unique visitors when he won the Republican nomination in July 2016, the Comscore data showed. By May 2019, Breitbart’s monthly unique visitors had dropped to under 5 million per month, Comscore found.

Breitbart readers in 2015 and 2016 took in something that was more akin to propaganda than journalism, said Tom Bivins, an ethics professor at the School of Journalism and Communication at the University of Oregon in Eugene. Miller was manipulating Breitbart, he said.

The White House did not respond to multiple requests for comment regarding Hatewatch’s investigation. Bannon also did not respond to two requests for comment on this report. Bannon assumed the role of executive chair at Breitbart News in 2012 following the death of conservative publisher and founder Andrew Breitbart. Bannon was in that job when these emails were sent that Hatewatch acquired. Larry Solov became president and CEO of the news website after Breitbart’s death.

Elizabeth Moore, a spokeswoman for Breitbart News, responded to Hatewatch’s request for comment about Miller’s relationship with editors at the website with the following statement:

The SPLC claims to have three- to four-year-old emails, many previously reported on, involving an individual whom we fired years ago for a multitude of reasons, and you now have an even better idea why we fired her. Having said that, it is not exactly a newsflash that political staffers pitch stories to journalists – sometimes those pitches are successful, sometimes not.

It is no surprise to us that the SPLC opposes news coverage of illegal-immigrant crime and believes such coverage is disproportionate, especially when compared to the rest of the media, which often refuse to cover such crimes.

Finding the right words on immigration

Miller focused strongly on the subjects of race and immigration in his emails to Breitbart News and shared white nationalist and other extremist content to inform McHugh’s reporting, Hatewatch reported Nov. 12.

The two also sometimes discussed what words to use in reporting to make their anti-immigration pitch with greater efficacy. In a July 6, 2015, email to McHugh and Boyle with the subject line “language,” Miller tested out a potential strategy for portraying those opposed to his views as being in support of unlimited immigration.

The email is noteworthy because the White House has accused opponents of supporting “open borders” – even though the term inaccurately describes their stated policies. McHugh appeared to agree with Miller later in an email marked “Unlimited vs mass immigration.”

McHugh, July 8, 2015, 4:33 p.m. ET: “I’m going to start saying ‘unlimited immigration’ instead of mass immigration for the most part. ‘Mass’ implies there might be an end in sight. But what the Left wants is zero restrictions, period.”

Miller expanded on how he felt rhetoric should be adjusted to make a better pitch to the public:

Miller, July 8, 2015, 5:05 p.m. ET: “Agreed. I also think the words immigration reform should be used exclusive [sic] to describe proposals to limit immigration. Rubio is an extremist who wants unlimited immigration, the American people are moderate and want to hit pause after the deluge.” 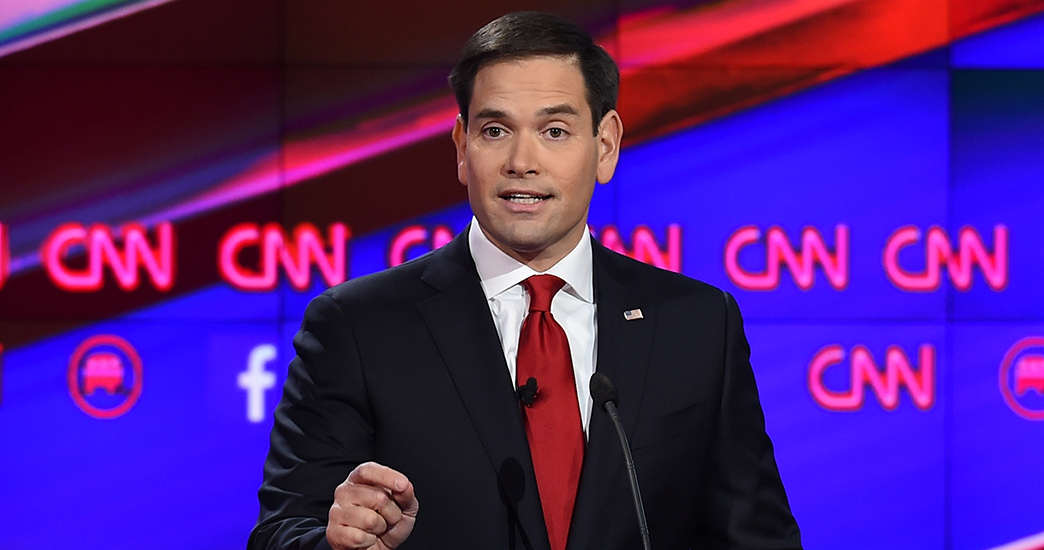 Sen. Marco Rubio (R-Fla.) gestures during a break in the Republican presidential debate in Las Vegas on Dec. 15, 2015. (Photo by Robyn Beck/AFP via Getty Images)

Miller called for negative coverage of other Trump opponents in emails to Breitbart, but he most commonly focused his attacks on Rubio, the U.S. senator from Florida.

In a March 30, 2015, email to McHugh and Boyle with the subject line “Rubio [campaign] to launch April 13th,” Miller wrote a single line of guidance for approaching the candidate’s forthcoming run: “Stress [the] symbolic importance of immigration.”

From then on, Miller repeatedly pushed for unfavorable reporting of Rubio’s campaign, lambasting him with derisive commentary. Here are 10 examples of Miller taking aim at Rubio in his emails to Breitbart:

When Rubio dropped out of the race March 15, 2016, McHugh openly rejoiced in an email with the subject line “Rubio out.”

Reporters covering politics are expected to be unbiased and to avoid engaging in political activity so as to avoid conflicts of interest, according to the Society of Professional Journalists. McHugh acknowledged to Hatewatch that she was ideologically driven and failed to meet these standards.

She told Hatewatch that Breitbart’s environment was inherently partisan and focused on shaping the outcome of the Republican primaries.

“Within Breitbart News’ internal Slack channels, we debated whether to support Trump or Cruz,” McHugh recalled to Hatewatch. “I supported Trump. Rubio was reviled, and reporters and editors brainstormed ways to craft a narrative that would harm his candidacy.” 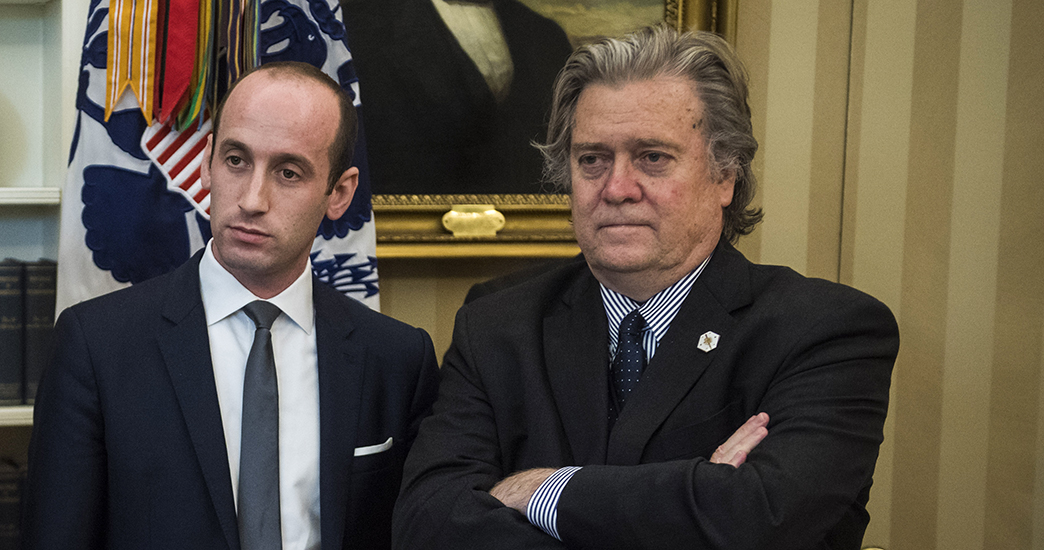 ‘Let’s go buck wild on this’

Miller, for his part, understood that as long as Breitbart pulled in readers, he could use it to affect politics. On Aug. 7, 2015, he emailed four Breitbart News editors – McHugh, Bannon, Hahn and Boyle – marking it with the subject line “Warning: rubio ressurrection [sic] begins.”

Miller’s email, following the first GOP debate, which Fox News hosted, credited Breitbart for derailing the so-called Gang of Eight legislation. Co-sponsored by Rubio, Gang of Eight was a bipartisan immigration bill that passed the Senate in 2013 before dying in the House of Representatives. Nativist and anti-immigration activists fiercely opposed the bill because of its emphasis on providing undocumented immigrants a pathway to U.S. citizenship.

Miller started the conversation by expressing his concerns that conservative pundits would protect Rubio during the nomination fight, and highlighted examples from Fox News, the National Review and the Washington Examiner to make his case. Bannon replied one minute later:

Bannon returned to the thread with an order:

McHugh, who has since renounced far-right politics, told Hatewatch that it’s clear to her now that Breitbart wasn’t meeting the standards of ethical journalism.

“Calling it ‘negligence’ is stretching the word to the extent of its most charitable definition,” McHugh told Hatewatch of the editorial process at Breitbart. “It should raise significant alarm that an organization consistently manipulated coverage out of public eye in order to influence a political party’s primary while insisting it was objective.”