White House senior adviser Stephen Miller and Robert Law, chief of the Office of Policy and Strategy for U.S. Citizenship and Immigration Services (USCIS), played roles in drafting Trump’s order, The New York Times noted on April 21. Both Miller and Law have close connections to anti-immigrant hate groups, helping underscore the influence racist think tanks have had in shaping U.S. policy during the Trump era. Trump signed the order into law on April 22, marking an unprecedented step for restricting immigration into the U.S. in the modern age.

Miller promoted material from the anti-immigrant hate group Center for Immigration Studies (CIS) to conservative website Breitbart News in 2015, prior to becoming Trump’s de facto immigration czar. He also shared a link from the white nationalist website VDARE to Breitbart around the same time, and pitched scores of racist stories to their editors, as Hatewatch previously reported. Law is a former lobbyist for the anti-immigrant hate group Federation for American Immigration Reform (FAIR), having served as their lobbying director and director of government relations from 2013 to 2017. He is a Trump-era appointee of USCIS and joined that agency in 2018. 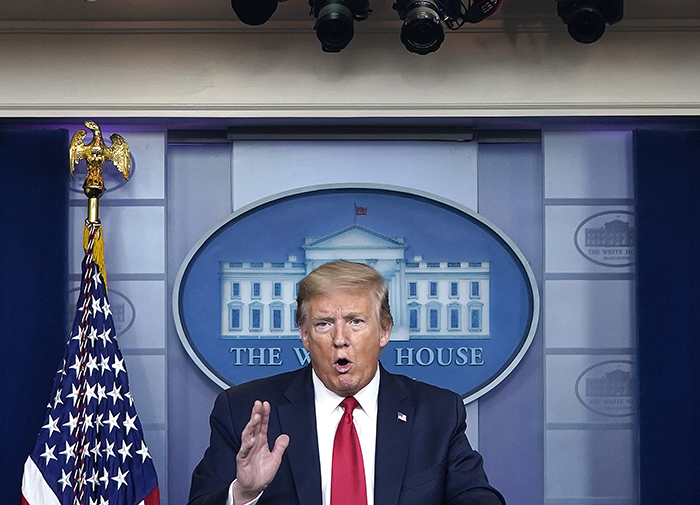 President Donald Trump speaks during the daily briefing of the coronavirus task force at the White House on April 22 in Washington. (Photo by Drew Angerer/Getty Images)

The late John Tanton, a notorious racist and eugenicist, founded FAIR and provided critical support in the creation of CIS. Both are non-profit groups that have gained significant access to influential policymakers during Trump’s first term. Each group has also promoted the writing of white nationalists and far-right activists who traffic in debunked pseudoscience purporting to connect race to intelligence in humans. As an example of their often-overlapping worldviews, both CIS and FAIR have argued during the COVID-19 pandemic that immigrants trapped in U.S. Immigration and Customs Enforcement (ICE) detention should be kept there, despite threats to their lives and safety caused by the virus.

Trump’s order, which is scheduled for 60 days but can be extended, is being executed under the auspices of protecting American workers during COVID-19 pandemic. Despite this claim, the order does not impact foreign-born guest workers entering the U.S., only those applying for green cards. The administration has also blocked asylum seekers during the pandemic. ProPublica reported on April 2 that this is the first time asylum seekers have been denied an opportunity to make their case in court in 40 years.

Trump first announced he would be signing the order on the night of April 20 through his Twitter account, and white nationalists and neo-Nazis on that website immediately celebrated the news. Extremists have long trumpeted the notion of a moratorium on immigration as a crucial step towards building a country for white non-Jews only.

“Trump should sign the immigration moratorium order at the Statue of Liberty,” white nationalist pundit Scott Greer posted to Twitter in the immediate aftermath of Trump’s announcement, mocking a favorite cultural target of the racist right.

Hatewatch reached out to the White House for comment about Miller and Law’s connection to hate groups but did not immediately receive a response.

Hatewatch obtained more than 900 emails Miller sent to Breitbart News editor Katie McHugh during 2015 and 2016, when he was working as an aide to Senator Jeff Sessions of Alabama, and later, working as an adviser on Trump’s presidential campaign. Miller demonstrated an interest in white nationalist and nativist literature in those emails, as well ramping up deportations of the undocumented, and stopping legal immigration into the U.S. outright.

Miller discussed the subject of stopping legal immigration on Aug. 4, 2015, in an email exchange with Garrett Murch, who also served as an aide to Sessions at that time.

Murch, Aug. 4, 2015, 6:22 p.m. ET: “[Talk show host] Mark Levin just said there should be no immigration for several years. Not just cut the number down from the current 1 million green cards per year. For assimilation purposes.

Miller, Aug. 4, 2015, 6:23 p.m. ET: “Like [Calvin] Coolidge did. Kellyanne Conway poll says that is exactly what most Americans want after 40 years of non-stop record arrivals.

Miller expressed admiration about President Coolidge in his emails to Breitbart News because he signed into law the 1924 Immigration Act. Based on eugenics, the act placed race-based restrictions on who could immigrate into the U.S. Adolf Hitler also praised the act for this reason in his book “Mein Kampf.”

Miller emailed to McHugh a link from VDARE, a white nationalist website that has long called for a complete halt to immigration into the U.S. Peter Brimelow, the group’s founder, wrote a post on April 21 titled “Trump Has Put an Immigration Moratorium ‘In Play.’ Not Enough – But Something,” referring to the order. He noted in his commentary that halting immigration in 2012 would have played a role in preserving a white majority in the U.S., a central goal of white nationalists.

“And whites – known until the 1965 Immigration Act as ‘Americans’ – would have been 68% of the population, instead of 63%,” Brimelow wrote, analyzing the imagined impact of what stopping immigration during the tenure of President Obama would have accomplished.

The 1965 Immigration Act, also known as Hart-Celler, put an end to the Coolidge-era racial quota laws that both Miller and Hitler praised. Miller derided Hart-Celler in his emails to Breitbart News and urged that publication to write articles criticizing it.

Prior to joining the Trump administration in 2017, Law served in multiple roles at FAIR, including as the lobbying director and the director of government relations. 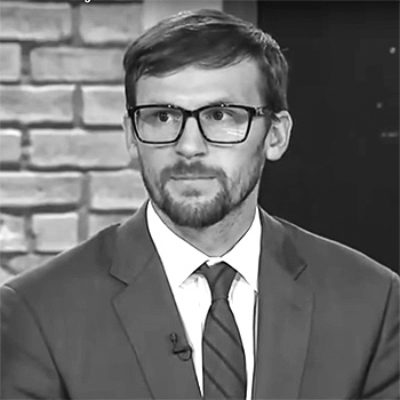 FAIR founder John Tanton consistently promoted racist views about immigrants. In a Jan. 26, 1996, letter to Roy Beck of NumbersUSA about California’s immigrant population, Tanton questioned whether “minorities” could ever “run an advanced society.” He believed in eugenics, a pseudoscientific practice embraced by Nazi Germany, which purports to instill superior genes in humans through the process of selective breeding. In a letter to the late Robert K. Graham, a California-based multimillionaire and eugenicist, on Sept. 18, 1996, Tanton expressed his belief that “less intelligent” individuals should “logically” have fewer children.

From 1985 to 1994, FAIR received approximately $1.2 million in assistance from the Pioneer Fund, a eugenicist organization founded in 1937 for the purpose of pursuing “race betterment” by promoting the genetic blueprint of “white persons who settled in the original thirteen states prior to the adoption of the constitution.”

Dan Stein, FAIR’s current president, articulated beliefs that mirror those expressed by Tanton. During an Oct. 2, 1997, Wall Street Journal interview with conservative journalist Tucker Carlson about “The Intellectual Roots of Nativism,” Stein asked, “Should we be subsidizing people with low IQs to have as many children as possible and not subsidizing those with high ones?”

While Law was employed with FAIR, working under Stein, he lambasted “sanctuary cities” in a 2017 FAIR legislative update, writing that they “allow criminal aliens to be released back into communities, often to recommit crimes.” He also harshly criticized the Obama administration’s Deferred Action for Childhood Arrivals (DACA) policy, an executive order implemented to protect from deportation undocumented immigrants who were brought to the U.S. as children.

“[DACA recipients’] parents made the choice to bring them here and defy our immigrations laws and just because you have children doesn’t mean that you have a human shield that exempts you from any form of enforcement,” Law said in a FAIR podcast in 2017, Media Matters reported.

Law co-authored a FAIR report, “Immigration Priorities for the 2017 Presidential Transition,” in November 2016 that outlined the type of anti-immigrant legislative agenda the group wanted to see the Trump administration enact.

“[The Trump administration] must lead the nation in formulating an immigration policy that sets and enforces limits on legal immigration; eliminates – to the greatest extent possible – illegal immigration; and protects American workers, taxpayers, and our most vulnerable citizens,” the co-authored report stated.

The report argued for limiting legal immigration into the U.S., including measures targeting the number of immigrants admitted via Temporary Protected Status (TPS), the refugee and asylum programs. TPS is an immigration status given to foreign nationals present in the U.S. who cannot return to their country of origin due to events such as armed conflict or an environmental disaster. In early 2018, the Trump administration took steps to block residents of majority non-white countries from receiving TPS, specifically from Haiti, El Salvador, Honduras and Nicaragua. Haiti is roughly 95% black, according to government statistics. Trump referred to these nations as “shithole countries” during a closed-door meeting with lawmakers, according to a report in The Washington Post.

In November 2019, Stein remarked on the Trump administration’s employment of former FAIR staffers, saying, “It certainly is delightful to see folks that we’ve worked with in the past advance and contribute to the various efforts of the administration, most of which we support.”

A chance to arrest the ‘loss of white America’

Historian Carly Goodman wrote in The Washington Post on April 22 that the Trump administration was capitalizing on the COVID-19 pandemic as an opportunity to enact an anti-immigrant agenda.

“Why suggest an immigration ban?” Goodman wrote in her analysis. “Because times of crisis create opportunities for anti-immigration advocates to cast blame on outsiders and transform policy in ways they have long sought, to arrest what they perceive as ‘demographic change’ and the loss of a white America. Trump’s emergency measures therefore could outlive his presidency.”

The Trump administration has enacted a flurry of policies targeting immigrants since the COVID-19 pandemic started to unfold, including: suspending all routine visa services at U.S. embassies and consulates on March 20, expelling all asylum seekers at the U.S. border with Mexico as of March 21, temporarily suspending refugee admissions as of March 19, banning undocumented college students from receiving emergency assistance as of April 21, and ordering a 60-day temporary ban of access to green cards for specific groups of people from abroad as of April 22.

Despite the ongoing public health crisis created by COVID-19, the Trump administration is also projected to issue 340,500 deportation orders in the year ending Sept. 30, 2020, an increase from 215,535 in 2019, according to the Transactional Records Access Clearinghouse, a Syracuse University research group that tracks the impact of government policies.

As with Trump’s initial announcement of an immigration order, these policies have been welcomed by far-right extremists.