After days of tense and sometimes violent protests in cities across the country, President Trump continued to use coded language, political division and threats to quell the activities.

On Monday, the Trump administration authorized the use of tear gas to clear protesters near a Washington, D.C., church that had been set on fire. Then he and officials from his administration used the boarded-up church as a backdrop for what many are calling a political stunt. Trump held up a bible, drawing the ire of religious leaders who said his actions toward those protesting the death of George Floyd at the hands of Minneapolis police officers was anything but Christ-like.

Trump’s policies and actions are both “religious hypocrisy and political insanity,” Rev. Dr. William Barber, president of Repairers of the Breach and co-chair of the Poor People’s Campaign, said in a news release. 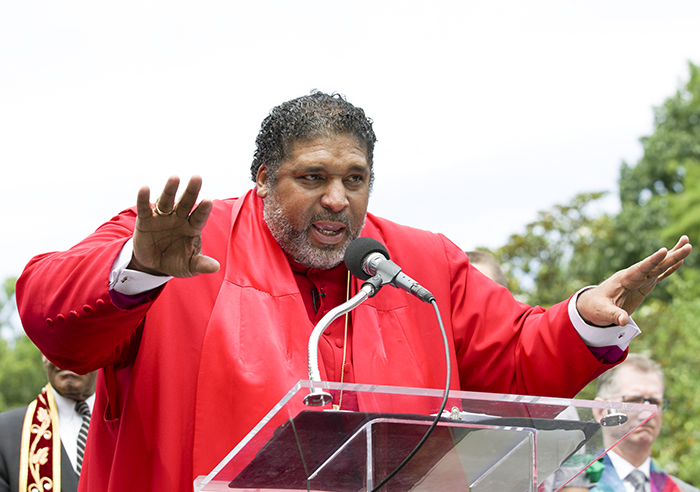 "Trump claims he’s using the Insurrection Act,” Rev. Barber tweeted Monday. “He (just) ordered the military to move protesters exercising their constitutional rights so he can go to church. But his policies violate the theology of the church to care for the sick, the poor, immigrants. Utter hypocrisy and insanity.”

Some public officials have stated that far-right groups are infiltrating otherwise peaceful protests, inciting violence and causing property damage in order to damage the public’s perception of the Black Lives Matter movement or to hasten civil strife, a strategy referred to in some circles as the “Boogaloo.”

Intelligence Project research analysts are on the lookout for premeditated strategies by members of organized hate groups to undertake such covert actions. 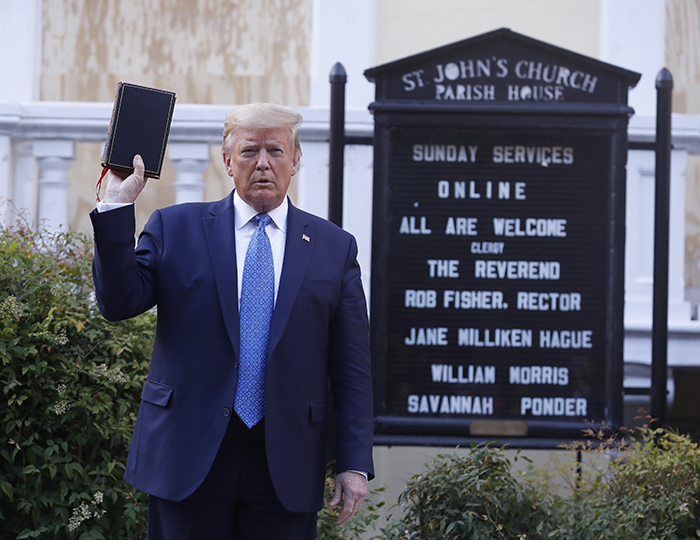 President Donald Trump poses with a bible Monday outside St. John's Episcopal Church after a news conference in the Rose Garden of the White House in Washington, D.C. (Photo by Shawn Thew/EPA/Bloomberg via Getty Images)

Extremists of all stripes are holding these protests up as a mirror to reflect their own respective views of America. White nationalists believe that the protests evidence the incompatibility of multiracial societies. Militia groups see a call to arms in defiance of a government hell-bent on bringing about the “New World Order.” Neo-Confederates believe they’d be better off in a white Southern ethnostate. Boogaloo groups believe that the apocalyptic event they wish to foment is imminent.

And some extremist group members and leaders are turning out to participate in protests.

Nick Fuentes, a self-styled “ Groyper leader,” was filmed at a protest in Tampa. The official Twitter account of the Oath Keepers, the largest antigovernment militia in the United States, shared photos of dozens of armed members in cities across the country over the weekend. Jessica Reavis of the League of the South photographed herself and other members of the neo-Confederate hate group in Danville, Virginia and Asheboro, North Carolina. The individual behind an accelerationist Telegram channel promulgating “Boogaloo” themes and railing against gun control, previously identified only by his handle “WarHippie,” was identified at a protest in Dallas, Texas. 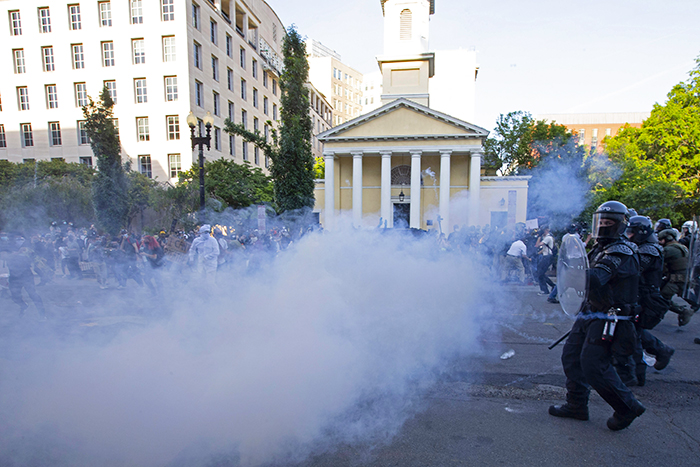 Police officers wearing riot gear push back peaceful demonstrators Monday by shooting tear gas next to St. John's Episcopal Church near the White House in Washington, D.C., during a protest over the death of George Floyd. (Photo by Jose Luis Magana/AFP via Getty Images)

The presence of these individuals at tense public events raises the possibility for violent interactions involving extremists, law enforcement, protesters and the general public.

President Trump’s announcement that he would “be designating ANTIFA as a Terrorist Organization” plays into far-right messaging that seeks to place blame for right-wing violence on their political opponents. It’s also harmful to the civil liberties of all Americans.

The announcement has electrified the far-right, particularly white nationalist groups that have experienced consequences for past violent actions, such as the Rise Above Movement and the League of the South.

Brad Griffin, “PR Chief” for the League, retweeted a post by conservative commentator Matt Walsh defending running over protesters in the road, a popular trope on the far-right. Walsh’s tweet stated:

If you’re blocking traffic, vandalizing vehicles, trying to stop and assault drivers, and in the process you get run over and die, this is your fault, the person who ran you over did nothing wrong, and you are the bad guy. Who is now dead. This shouldn’t have to be explained.

Attached to his retweet, Griffin included a photograph of James Alex Fields, taken the day that he drove his car through a crowd of counterprotesters, killing Heather Heyer.