The emails further corroborate Hatewatch analysis showing that the extreme far-right fringe of U.S. politics grew bolder due to Trump’s rise in the Republican party and then received unprecedented access to power after he took office. 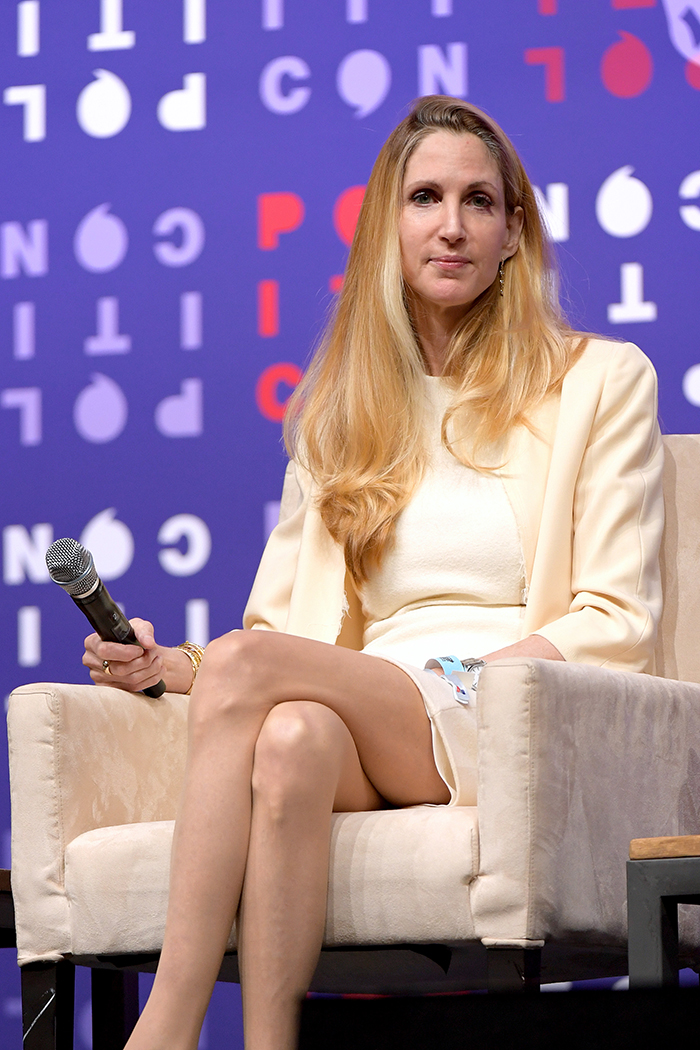 Ann Coulter speaks at the 2019 Politicon at Music City Center on Oct. 26, 2019, in Nashville, Tennessee. (Photo by Jason Kempin/Getty Images for Politicon)

Hatewatch previously reported that both White House senior adviser Stephen Miller and deputy communications director Julia Hahn knew VDARE founder Peter Brimelow before Trump appointed them to positions in his administration at the start of his term. Former Breitbart News editor Katie McHugh, who provided evidence of Miller and Hahn’s connections to the movement, also told Hatewatch about the efforts of VDARE activists to influence the staffing of the administration. As with previous investigations, she leaked email exchanges to back up her claims.

One email sent to McHugh on Nov. 10, 2016, shows prominent white nationalist propagandist and longtime VDARE author Kevin DeAnna soliciting resumes, which he claimed to be doing on behalf of VDARE-linked pundit Ann Coulter. Timestamps show DeAnna sent the email two days after the 2016 election. Under the subject line “Administration jobs,” he wrote:

Ann Coulter asked if you want to get a job in the Administration. She wants names. I mean, you have a better in than me with [Steve] Bannon and all, but it's something you should consider.

Send me a one page resume (boastful as if Ann was writing it, not you) if you can.

Great work with everything you did this cycle. 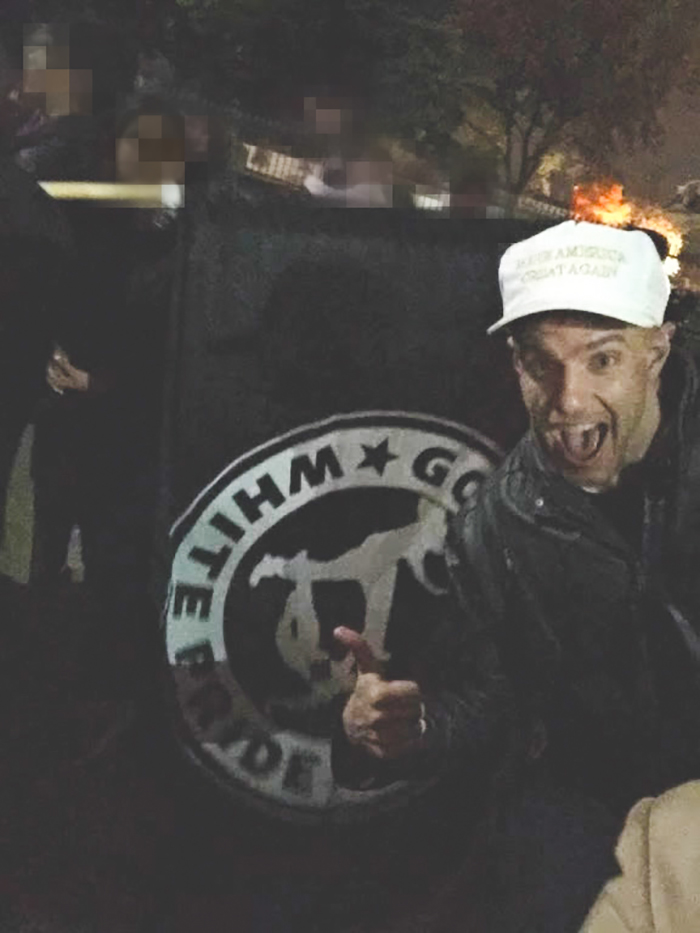 White nationalist Kevin DeAnna poses for a photo in front of antifascist protesters outside the White House on election night in 2016.

DeAnna is a far-right extremist and a white nationalist. He has published nearly 2,000 articles for more than half a dozen white nationalist sites under the pseudonyms “James Kirkpatrick” and “Gregory Hood” across the last twelve years, as Hatewatch previously reported. While writing as Gregory Hood in 2018 for the white supremacist website American Renaissance, DeAnna defended the formation of countries built only for white people, writing that “white nationalists are the true defenders of existing nation-states.”

Coulter, a fixture in the right-wing media circuit for a generation, emerged as one of Trump’s most high-profile backers early on in the 2016 election cycle. Coulter said her anti-immigrant book “Adios America” influenced Trump’s run for office in an October 2015 interview on a television show aired by a Sinclair Broadcast Group affiliate, claiming Trump read the book “cover to cover” prior to announcing his candidacy.

Coulter’s byline first started appearing on VDARE’s website in 2013. To date, her byline has appeared on VDARE’s website nearly 400 times across a span of seven years, making her arguably the most famous person on it, along with anti-immigrant politician Pat Buchanan. McHugh told Hatewatch she first met Coulter at a VDARE Christmas party in New York City in December 2014. Hatewatch reached out to DeAnna and Coulter for comment on the email exchange McHugh shared, but they did not respond.

McHugh replied to DeAnna’s email seeking resumes for the administration by recommending that he also apply. DeAnna wrote back: “Doing my best. Please put a good word in for [Steve] Bannon for me if you can. Doing resume as we speak and drinking Trump champagne.” Bannon, Trump’s chief strategist at that time, served as the executive chairman of Breitbart News while McHugh wrote for them.

After McHugh sent her resume to DeAnna, he shared a photograph of himself taken outside the White House, in front of a crowd of anti-Trump demonstrators. DeAnna, wearing a black jacket and a white “Make America Great Again” cap, gave a thumbs-up gesture and opened his mouth wide in front of a “GOOD NIGHT WHITE PRIDE” banner in the photo.

“Had you been there, it would have been the greatest night of my life. I kept thinking of waking you up when Brexit passed. Man I miss you,” DeAnna wrote. “But, it was pretty awesome anyway. Here's me trolling the antifa outside the White House.”

McHugh wrote anti-immigrant posts for Breitbart News at the time DeAnna solicited her resume, and she associated with a number of open white nationalists. These associations included DeAnna, whom she dated from 2013 to 2016 and again briefly in 2017, she said. McHugh has since renounced racism and leaked to Hatewatch an entire hard drive of private messages she shared with DeAnna and other far-right extremists during her time in the movement.

Although VDARE founder Peter Brimelow denies being a white nationalist, he has for decades trafficked in white nationalist rhetoric. In one example from June 2017, VDARE gave a platform to white nationalist activist Jason Kessler to promote the “white genocide” conspiracy theory on their website. Kessler helped organize the deadly “Unite the Right” rally in Charlottesville, Virginia, in August 2017, which VDARE publicly defended as recently as this year.

In September 2019, Media Matters highlighted the degree to which VDARE’s YouTube channel embraced rhetoric employed by far-right terrorists. Facebook and YouTube suspended VDARE’s accounts during the spring and summer of 2020, respectively. VDARE offered readers a “Cyber Monday” deal after Thanksgiving this year for the virulently racist novel “The Camp of the Saints” – a book beloved by white supremacists and other far-right extremists.

Hatewatch reached out to Brimelow for a comment on this story, but he did not respond. Hatewatch also emailed the White House for a comment. Deputy Press Secretary Judd Deere replied, “Who is Peter Brimelow?” After Hatewatch answered him, Deere wrote back that the premise of Hatewatch’s story was untrue.

“This is categorically false as evidenced by the fact that the SPLC cannot name a single person who was allegedly installed as a result of this supposed process,” Deere wrote.

McHugh forwarded additional material to corroborate her claim that VDARE sought resumes to staff the White House in the early days of the transition of power from President Obama to President Trump. She sent one email to Coulter separately to demonstrate her interest in working for the White House.

“Hi, Ann, I received a message from a mutual acquaintance saying you wanted to know if I’d like a job in the administration. The answer is wholeheartedly yes. Anything I can do to MAGA,” McHugh wrote to Coulter later that night on Nov. 10, 2016, referring to a slogan associated with Trump’s campaign. Coulter did not reply.

On Nov. 11, 2016, McHugh contacted her former mentor, John Elliott, about the same opportunity. Elliott recruited McHugh into a journalism program at the libertarian-leaning Institute for Humane Studies, she told Hatewatch. At the time McHugh sent the email about administration positions, Elliott had been struggling to find consistent full-time work after leaving his previous post at the conservative Intercollegiate Studies Institute in 2015, she said.

McHugh wrote in explicit terms that VDARE – not Coulter, or DeAnna, but the organization itself – sought resumes to help fill out Trump administration positions:

VDARE is looking for good people to help fill Trump administration ranks with the help of one of our friends in high places.

Feel free to use me as a reference and resume proofreader.

Send a one-page resume to James Kirkpatrick [email link] — who knows, maybe we can all get into the White House.

Eight years of government work plus health benefits would solve a lot of problems.

Emails show he wrote back to McHugh a few hours later on Nov. 11 seeking help drafting his resume. McHugh and Elliott both contributed at that time to a small, private email listserv known as “Morning Hate.” As Splinter reported in 2019, the group was largely steered by Elliott. The listserv included a handful of individuals working in the conservative media world. Elliott published hate on the listserv, referring to some of his former IHS interns as “homos” while praising Hitler as “our good friend.”

The White House never hired DeAnna, Elliott or McHugh, but the office has employed multiple people with ties to VDARE under Trump’s leadership.

Stephen Miller, who served as an adviser on Trump’s campaign prior to working for the White House, invited VDARE founder Peter Brimelow to speak at Duke University in 2007. McHugh also leaked to Hatewatch an email showing that Miller forwarded her a link to a post from VDARE’s website in 2015 on the subject of Temporary Protective Status for refugees, while she worked for Breitbart, and while he served as an aide to then-Sen. Jeff Sessions of Alabama.

Julia Hahn came into the White House as a special assistant to Trump and became his deputy communications director this March, around the time when critics accused the president of mismanaging the response to the COVID-19 pandemic. Brimelow wrote to Hahn and McHugh in 2014, referencing her apparent attendance of a writer’s workshop hosted by the white nationalist group The Social Contract Press, emails show. Hahn also emailed McHugh in 2016, recommending that she interview “Peter” for a story, referring to Brimelow by his first name.

Larry Kudlow, Trump’s economic adviser, invited Brimelow to his home for his birthday party in August 2018. When asked about Brimelow’s propensity to publish white nationalist propaganda by The Washington Post, Kudlow claimed not to know he held those views.

“If I had known this, we would never have invited him,” Kudlow said. “I’m disappointed and saddened to hear about it.”

The White House terminated speechwriter Darren Beattie from his position in the administration in August 2018, after CNN revealed he had addressed the white nationalist H.L. Mencken Club at its November 2016 conference alongside a cluster of VDARE contributors. Beattie had been one of three speakers on a panel discussing “The Right and Its Enemies,” alongside Brimelow and Ilana Mercer, a South African-born far-right writer whose columns had been published at VDARE in the past. The same conference featured a number of other VDARE affiliates and contributors, including columnists John Derbyshire and Jack Kerwick. The Trump administration brought Beattie back into the government in November despite his white nationalist ties, appointing him to the Commission for the Preservation of America’s Heritage Abroad.

When reached for comment, Beattie said, “I had no contact with VDARE as it relates to finding work in the administration, and VDARE had nothing to do with my being hired for any position in government or otherwise.”

The Center for Media and Democracy reported in December that DonorsTrust, a dark money group that “manages and disperses wealthy conservatives’ charitable funds anonymously,” gave VDARE a staggering $1.5 million in 2019. DonorsTrust bundles money from “Republican billionaire families such as the DeVoses, Kochs, and Mercers,” the watchdog noted.

VDARE may have spent some of their riches situating themselves closer to the seat of power in the U.S. In February, Brimelow’s hate group purchased a historic castle in the vacation town of Berkeley Springs, West Virginia. The white nationalists spent $1.4 million on the castle and did so without the help of a loan. According to residents of Berkeley Springs, some of whom have protested VDARE’s presence there, the castle offers residents a one-and-a-half-hour commute to Washington, D.C., bringing them much closer to the capital than they were at their previous home in Connecticut.