Parler, a conservative alternative to Twitter that has become a haven for far-right extremism of all stripes, proved to be a haven for recruitment and promotion for the Jan. 6 pro-Trump riot at the U.S. Capitol building.

The site, which bills itself as “unbiased social media,” served as a platform for the insurrectionists’ violent threats, including against police and lawmakers.

“Find the traitors and get the rope. THIS IS OUR HOUSE!!" wrote Jeremy Bertino, a self-described Proud Boy, who goes by the handle “Immortal Noble Beard” on the site. 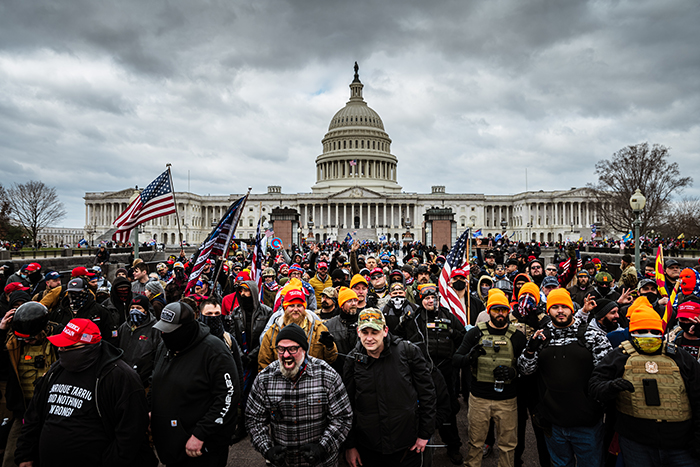 Pro-Trump protesters gather in front of the U.S. Capitol Building on Jan. 6 in Washington, DC. A pro-Trump mob stormed the Capitol, breaking windows and clashing with police officers.(Photo by Jon Cherry/Getty Images)

“Let’s take this fucking Country BACK!! Load your guns and take to the streets!” wrote Kevin Greeson, who came from Athens, Alabama, to the protest. Greeson later died of a medical emergency during the violent unrest in Washington, D.C., according to AL.com.

Despite its role in promoting what Washington, D.C., mayor Muriel Bowser dubbed a series of “acts of domestic terrorism,” Parler remained freely available on the Apple and Google app stores until Friday evening. Neither Google nor Apple returned Hatewatch’s requests for comment. However, shortly before publication, BuzzFeed reported that Apple had given Parler a 24-hour ultimatum to implement a moderation plan for its platform or face expulsion from the App Store. Not long after this news became public, Google announced they were pulling Parler from Google Play, citing its lack of "robust moderation."

Finally, on Saturday, Apple announced it had determined Parler had not taken adequate steps to clamp down on illegal and violent activity on its platform, and as a result would be removed from the App Store indefinitely.

The platform also served as a place for antigovernment and hate groups to organize and strategize, both in the run-up to the Jan. 6 insurrection and in the midst of the Capitol attack.

Individual extremists also used Parler to coordinate travel on the ground in order to avoid the police. Per The New York Times, others discussed carrying weapons into Congress – which is a felony – and exchanged tips on what tools to use to rip open doors.

Parler was founded in 2018 as a conservative alternative to Twitter. But its funding structure remained a bit of a mystery until Rebekah Mercer – a prominent conservative donor whose father, Robert Mercer, founded the now-defunct data analysis company Cambridge Analytica – was revealed to be one of the site’s founders and main backers in late 2020. Dan Bongino, a right-wing media personality, also acquired a major ownership stake in the company in summer 2020. The Mercers have also been revealed to be financial backers of Breitbart News.

Parler became a household name in late 2020 after Biden’s electoral win in November spurred a wave of pro-Trump conservatives claiming they were migrating to the site. But the site’s popularity among far-right extremists of all stripes began almost as soon as the site was launched. The Proud Boys, banned from Facebook since 2018, began moving to Parler after their removal from Facebook, and their members are still among some of the sites’ most prominent extremist voices.

Meanwhile, Parler came into favor with antigovernment groups after Facebook began to crack down on QAnon and militia pages in the later summer and fall of 2020. As in-person activity increased in the days and weeks before and after the presidential election, Parler emerged as a place where people could freely share and promote far-right rallies. Hatewatch was also able to identify Parler users associated with white supremacist accelerationism – an increasingly popular strategy on the extreme right that contends modern society is irredeemable and offers up an apocalyptic race war as its sole savior.

The site’s lax approach to content moderation is one of the main appeals of Parler for far-right extremists. Curiously, its terms of service belie this reputation, granting the site broad moderation powers, and asserting that Parler can “remove any content and terminate access” to the service, “at any time and for any reason or for no reason.”

How insurrectionists used Parler to plan their siege of the U.S. Capitol

As The New York Times and other outlets have noted, far-right extremists used Parler throughout the siege of the Capitol building on Jan. 6 to coordinate their actions directly, including offering suggestions on ways to avoid the police. Organizers of the event were also not shy, even in the run-up to the event, about expressing their view that violence may become a real possibility. Hatewatch also viewed numerous posts about the Jan. 6 attack using hashtags referring to white supremacist texts associated with major domestic terror attacks.

“If D.C. escalates … so do we,” wrote Ali Alexander on Parler about a week prior to the event. Alexander is the self-described “National Organizer” for Stop the Steal.

In the days before the insurrection, Alex Jones and Owen Shroyer of the conspiracy network Infowars used Parler to rally their followers. Infowars’ official account, which boasts 327,000 followers, went as far as to put out a message ahead of the event saying, “Today is the day - @alexjones leads largest patriot movement in history through Washington D.C.!”

Trump ally and longtime Infowars associate Roger Stone also circulated details of the protest to his 414,000 followers. On the morning of Jan. 6, Stone reiterated his baseless conspiracy of “#StopTheSteal” while sharing a flyer to “Defend America with Roger Stone Today on Capitol Hill.”

Even after the insurrectionists’ raid left five people dead, paramilitary antigovernment groups and hate groups praised the day as a success on Parler. On Jan. 7, the Last Sons of Liberty, a boogaloo group that adheres to the idea that the government must be overthrown, put out an official statement on Parler praising members for allegedly having played an instrumental role in helping breach the Capitol building.

The statement, which was signed by the group’s leader Mike Dunn, embraced the disarray, saying, “Any moment to be used to throw a middle finger to Tyranny, should be capitalized on.”

Proud Boys chairman Enrique Tarrio, who had been arrested and banned from the nation’s capital on Jan. 5 for charges of destruction of property stemming from a prior violent event in D.C., took to Parler to try and ease insurrectionists’ concerns. He offered advice and support, saying, “Unless you destroyed property or assaulted an officer...(Which is serious but they’ve dropped those charges for anarcho-Communists)..they can only charge you with trespassing. Do not let them scare you with anything else. This is the time to say FUCK THE SYSTEM.”

Even though Apple and Google include restrictions in their terms and conditions for apps that either facilitate violence or terroristic acts, Parler was not removed from either platform until Jan. 8 – two days after the insurrection at the Capitol. Gab, a platform with a similar user base and reputation for violent, hateful content, was booted by both Apple and Google in 2017 for hate-speech violations. Apple has also restricted certain channels on the encrypted messaging app Telegram for violations of their terms and conditions. And while the insurrection at the Capitol may be the most extreme example of the app being used to organize acts of violence and domestic terrorism, it is far from the first.

Extremists, including many banned from mainstream social media platforms, have a history of using Parler to help mobilize large scale pro-Trump events. The Nov. 14 “Million MAGA March” in D.C. – which brought together white supremacist groups, antigovernment extremists and QAnon conspiracy theorists – was promoted heavily on Parler. Likewise, Alex Jones’ “Stop the Steal” caravan, which traveled from Austin, Texas, to Washington, D.C., by way of the South, was promoted prolifically on Parler. At one point during the trip, Jones called on his supporters to “surround the governor’s mansion” while on a stop in Georgia.

The Proud Boys in particular have used Parler to organize and promote their rallies in Washington, D.C., Portland, Oregon, and elsewhere. A rally in December, which included numerous instances of violence, resulted in a series of four attacks on churches in downtown D.C. that are being investigated as hate crimes. A recent complaint filed on behalf of the Metropolitan African Methodist Episcopal Church, one of the churches targeted by the group, cites Parler as a place where Tarrio, the group’s leader, “frequently coordinates and communicates with other co-conspirators.”