Following the release of the Biden administration’s immigration plans and priorities, former senior Trump officials such as Stephen Miller and Mark Morgan, who both maintain ties to anti-immigrant hate groups, reentered the public sphere determined to preserve the nativist status quo they left behind. Additionally, the Republican Party has greeted these individuals and their nativist worldviews with open arms.

Many wondered where anti-immigrant Trump administration officials would end up and what they would do. The answers to those questions quickly emerged. 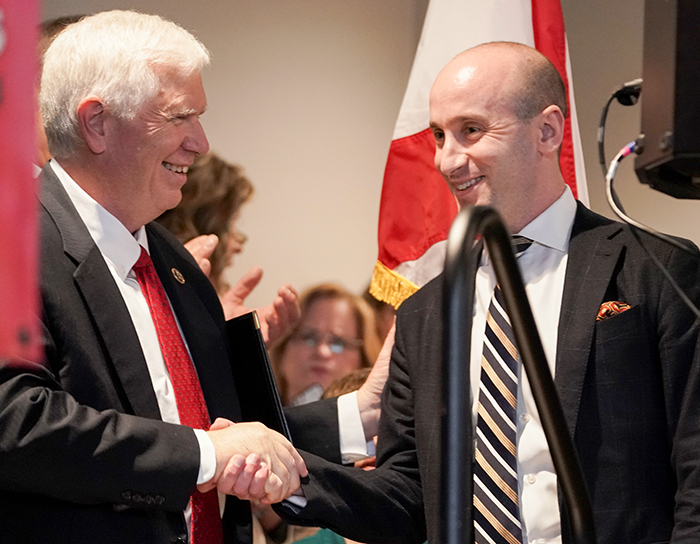 In January, Hatewatch reported on how Rep. Brooks was one of the first elected officials to falsely claim that anti-fascist provocateurs were potentially responsible for the storming of the U.S. Capitol on Jan. 6. This was despite the fact that only a few hours earlier, Rep. Brooks spoke at the “Save America” rally, telling attendees, “Today is the day American patriots start taking down names and kicking ass.”

Last month, the Republican Study Committee (RSC) hosted Miller and Morgan for a presentation on how to mobilize congressional opposition to President Joe Biden's immigration proposal. The RSC consists of 152 Republican members of Congress, making it the largest conservative caucus on Capitol Hill.

Miller’s inclusion in Rep. Brooks’ Senate campaign launch and the meeting between the RSC and Miller and Morgan signals the enduring influence of the Trump administration’s nativist immigration agenda on the Republican party. During the Trump era, Miller, Morgan and other nativists in the administration succeeded in dismantling the preexisting immigration system and enforced a de facto moratorium on all immigration to the United States by the time Trump left office.

During a White House press briefing on March 1, current Department of Homeland Security (DHS) Secretary Alejandro Mayorkas best summarized the impact of the Trump administration’s actions, saying, “It takes time to rebuild the system from scratch.”

Miller and Morgan played pivotal roles in crafting and implementing, respectively, many of the Trump administration’s inhumane and punitive immigration policies, including but not limited to the zero-tolerance policy, also known as family separation, the Muslim ban and ending the Deferred Action for Childhood Arrivals (DACA) program.

Throughout his time in the Trump administration, Miller reportedly “purged” government agencies, particularly DHS, of civil servants who were not loyal to his extremist agenda. Unlike many of his colleagues, Morgan strengthened his standing within the former administration because of his loyalty to President Trump and Miller’s anti-immigrant agenda.

According to leaked emails reviewed in a Hatewatch investigation, Miller shared white nationalist and anti-immigrant content with Breitbart News editors in an apparent effort to build an appetite for the types of immigration policies he would help shape as an adviser to Trump. Hatewatch analysis demonstrated the degree to which the same literature, conspiracy theories and policies supported by white nationalist and nativist hate groups influenced Miller’s views on immigration. 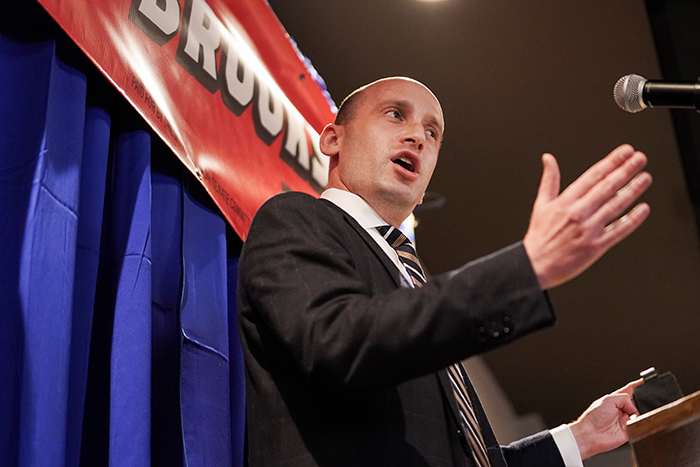 In 2015, Miller shared a link from the white nationalist website VDARE to provide background on story for Breitbart News. Former Breitbart News editor Katie McHugh, who leaked the emails to Hatewatch, also said that Miller referenced the white supremacist website American Renaissance in a phone conversation they had in that same year.

Miller’s nativist ethos is exemplified in his efforts to cancel the DACA program. In the cache of emails reviewed by Hatewatch, Miller argued that DACA recipients would reshape U.S. demographics by replacing native-born citizens. Nativists and white nationalists share a fundamental belief in the need to preserve the United States’ historical white majority.

To Miller, President Biden’s immigration proposal signals a complete reversal of the anti-immigrant approach taken by the Trump administration.

Prior to his presentation to RSC members, Miller expressed his enmity for the Biden administration’s immigration plans during an appearance on Fox News. He said, “It is the most radical immigration bill ever written, drafted or submitted in the history of this country,” despite the fact that the Trump administration implemented more than 400 immigration-related policy challenges, according to the Migration Policy Institute.

In a Fox News appearance on March 1, Morgan similarly excoriated the Biden administration’s immigration agenda, leveling baseless accusations about its motives. Morgan claimed, “That’s the goal of this [Biden] administration: Not to protect our borders, not to enforce our laws, but absolutely to exploit them, abuse them and let people illegally in the United States.”

In February, the Federation for American Immigration Reform (FAIR), an anti-immigrant hate group founded by white nationalist and eugenicist John Tanton in 1979, announced that Morgan would serve as a senior fellow and additional spokesperson for the organization. From its founding, FAIR has spent decades advocating, at state and federal levels, for severely restrictive immigration policies.

FAIR has called for, among other policy recommendations, repealing DACA, a complete halt to all forms of immigration to the U.S., and an end to birthright citizenship. The four years of President Trump’s tenure provided FAIR unprecedented access to and influence on federal immigration policy. Hatewatch has previously reported on how former FAIR staffers served in the Trump administration, specifically within DHS.

In speaking about his new role, Morgan stated, “I am delighted to be part of the effort to seek out solutions to mitigate the tremendous burden and negative impact of uncontrolled immigration on our country’s national security and economic prosperity.”

Morgan used the airtime to support the Trump administration’s anti-immigrant policies, even going as far as defending the human rights abuses inflicted on caged migrant children. During an interview with Fox News’s host Tucker Carlson on April 4, 2019, Morgan suggested that U.S. Border Patrol “should be applauded for what she [Rep. Alexandria Ocasio-Cortez] is talking about, cages.”

Shortly thereafter, former President Trump named Morgan as the acting director of U.S. Immigration and Customs Enforcement (ICE), a role he held from early to mid-2019. He then served as the acting commissioner of U.S. Customs and Border Protection (CBP) until the start of the Biden administration in January.