White House senior policy adviser Stephen Miller went against many Republicans when siding with white nationalists and other extremists on the issue of Deferred Action for Childhood Arrivals, more commonly known as DACA, emails show.

In emails to Breitbart News leaked to Hatewatch, Miller said DACA recipients would contribute to altering the country’s demographics by replacing Americans born in the United States. White nationalists often promote the idea of the “great replacement” in their propaganda. Manifestos linked to terror suspects have cited this idea to justify acts of violence.

Anti-immigrant groups created by the late John Tanton also have advanced the theory of demographic replacement, including the Center for Immigration Studies and the Federation for American Immigration Reform.

Miller discussed the subject of DACA as it relates to demographic replacement in a March 10, 2015, email while criticizing former Florida Gov. Jeb Bush, then widely expected to be a top GOP candidate for president in 2016. Miller condemned his fellow Republicans on the subject of immigration and also birthright citizenship, which the 14th Amendment grants to those born or naturalized in the United States. Far-right extremists want to eliminate birthright citizenship outright.

“Demanding DREAMers be given citizenship because they ‘know no other home.’ That principle is an endorsement of perpetual birthright citizenship for the foreign-born,” Miller wrote in the email, using a term to describe DACA recipients. “Not only will the U.S.-born children of future illegal immigrants and guest workers be made automatic U.S. citizens, but their foreign-born children will too because, as [former Republican House Majority Leader Eric] Cantor said, ‘Our country was founded on the principle.’”

Miller added in the same thread: “Jeb [Bush] has mastered the art of using immigration rhetoric to sound ‘moderate’ while pushing the most extremist policies.” In a follow-up email, Miller referred to Bush’s desire to use “immigration to replace existing demographics.”

“[President Barack Obama’s] DACA amnesty remains in effect, which provides illegal youth (one of the single strongest pull factors for entering and remaining illegally) with both work permits and generous free cash tax credits,” Miller wrote to Katie McHugh, then a Breitbart editor, with the subject line “The Immigration Surge,” warning of the growing “foreign-born share” of America’s workforce.

McHugh leaked more than 900 emails to Hatewatch that Miller sent to her from March 2015 to June 2016 to help expose what she described as the “evil” underpinnings of President Donald Trump’s immigration policies. These include rescinding DACA and separating children as young as 4 months old from their parents at the border. McHugh said she was fired from Breitbart for publishing anti-Muslim tweets. While working for Breitbart, she was enmeshed in America’s far-right, anti-immigrant movement, but she has since renounced those views.

Miller was an aide to then-U.S. Sen. Jeff Sessions when most of the emails were sent. Miller has not responded to multiple requests for comment, and the White House called the Southern Poverty Law Center a “long-debunked far- left smear organization” after the series on his emails began to run. Breitbart News dismissed Hatewatch’s reports on the emails by saying that “it is not exactly a newsflash that political staffers pitch stories to journalists.”

Hatewatch previously reported that Miller showed an apparent interest in writers such as Jared Taylor and Jason Richwine, who have argued that Latinos are predisposed to lower IQs than whites, and that he treated nonwhite immigration with contempt throughout his correspondences with McHugh and Breitbart.

In a November 2015 email that Hatewatch has not previously published, Miller forwarded an interview with Phyllis Schlafly from far-right conspiracy website WorldNetDaily that argued undocumented immigrants should be shipped out on trains to “scare out the people who want to undo our country.”

Miller quoted from Murdoch’s Twitter account as stating, “Mexican immigrants, as with all immigrants, have much lower crime rate than native born.”

“Actually, no,” Miller responded in an email to McHugh. He included an article by Richwine arguing it was time to “lift the taboo” on talking about his belief that Latino immigrants are less likely than whites to be upwardly mobile. 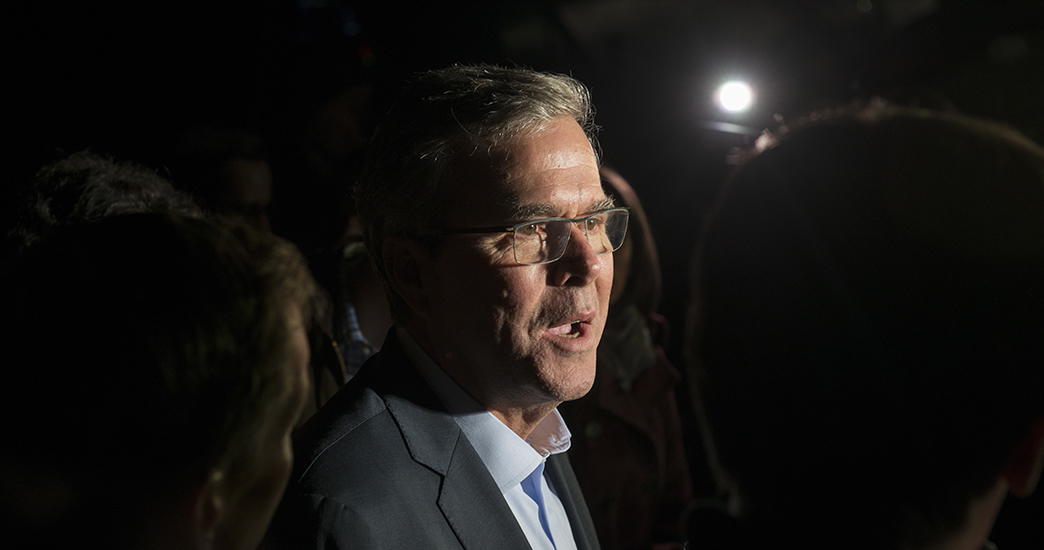 Undoing DACA and the 'Manichean worldview'

Obama, who broke records in deporting undocumented immigrants, created DACA in a 2012 executive branch memorandum as a way to protect from deportation undocumented immigrants who were brought to the United States as children. Many mainstream conservatives oppose the program – not out of fears of a “great replacement” – but because they believe Obama’s move to be unconstitutional.

Despite that opposition, DACA is widely perceived as having strong bipartisan support. It gives recipients an ability to work in the United States legally and obtain driver’s licenses.

Every two years, recipients of DACA must submit renewal applications and meet a series of requirements related to education. They must avoid criminal offenses to stay in the United States. When polled in 2017, nearly two-thirds of Republicans wanted an agreement reached on DACA that would go even further than Obama’s program – offering recipients a pathway to citizenship.

Trump announced a plan to terminate DACA on Sept. 5, 2017, noting that “young Americans have dreams too.” White nationalists and other far-right supporters of the president loudly praised his move. The white nationalist website VDARE published the headline “There is no such thing as a ‘deserving DREAMer’” on the day Trump acted. (Miller had linked to VDARE in an October 2015 email to McHugh.)

The neo-Nazi website Daily Stormer published Trump’s remarks on the subject in full – along with an illustration of him as a warrior, decorated with skulls and draped with the U.S. and Confederate flags.

Economists, including some conservatives, have praised DACA for stimulating entrepreneurship and reportedly adding billions of dollars in revenue to the economy. But Christopher Parker, a political science professor at the University of Washington who has written extensively on civil rights issues, told Hatewatch that the Republican Party will no longer compromise on bills that are “really, really conservative by any stretch of the imagination” because its base is focused on a perceived loss of social status related to race.

“They want to maintain their social prestige in America,” Parker told Hatewatch, referring to Miller and his allies. “This is not about economics anymore. They know about the economic data, but they just don’t [care].”

Parker describes this attitude as a “Manichean worldview,” or extreme two-sidedness without nuance – a world of black and white. According to Parker, the same animus that drives Republicans away from cutting a deal with Democrats on DACA also keeps them from speaking out about Miller’s interest in racist authors and issues related to white nationalism.

“They see America as inexorably slipping away from them, and Stephen Miller epitomizes this,” Parker said. “They see what’s happening with DACA as them losing their country [to nonwhite people]. And because they have embraced his Manichean worldview, they won’t compromise on anything.”

Nearly 150 Democratic politicians have called for Miller’s ouster since Hatewatch first reported on his emails on Nov. 12, according to a tally by HuffPost’s Christopher Mathias, who has been covering the response to Hatewatch’s series . But Republicans have mostly remained silent, choosing to avoid the topic of white nationalism altogether. U.S. Rep. Jeff Van Drew of New Jersey, as a Democrat, condemned white supremacy in the context of Hatewatch’s report in a Nov. 25 tweet . Van Drew switched parties and became a Republican during the debate over Trump's impeachment. 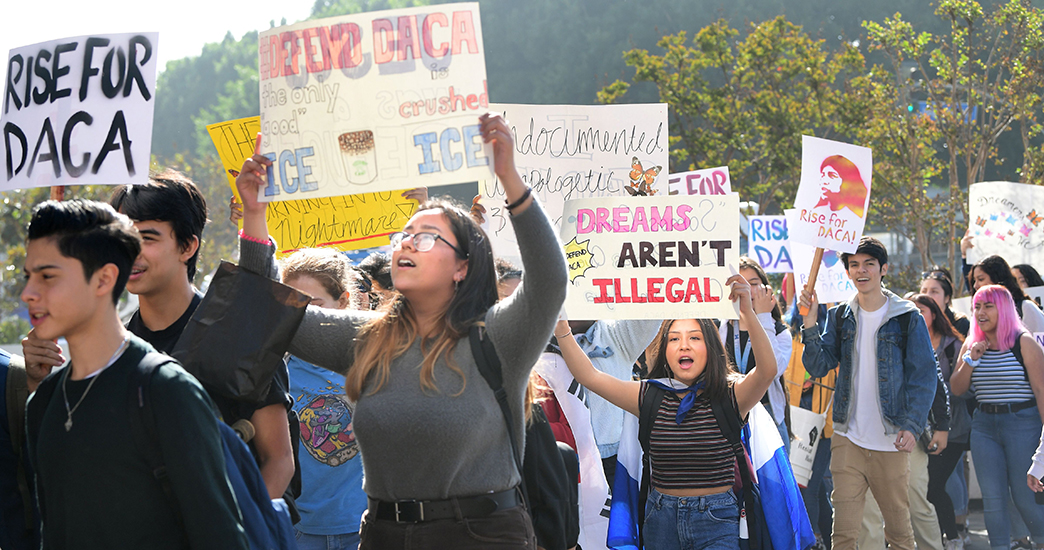 What’s at stake for DACA recipients

It’s unclear what will happen to DACA recipients if the Supreme Court allows the Trump administration to end the program. But one thing is certain: They will be at risk for immediate deportation.

DACA recipient Marisol Estrada, 25, is a Georgia-based employee at an immigration law firm. Estrada’s family moved to Savannah from Mexico when she was 5, she told Hatewatch.

“It’s a disservice to the country to have me deported because I benefit this country,” she said, responding to the views of Miller and others. “This is the only country I know as home, and I would never do anything to harm it.”

Estrada graduated from high school with an international baccalaureate diploma, giving her a head start of 25 college credits. She later attended Georgia Southern University and plans to go to law school. By almost any measure, she is a symbol of DACA’s success.

Estrada told Hatewatch that she attended one Young Republicans meeting before finding that some members were too extreme in their attitudes about people of color.

“With Miller’s extreme views, I think it’s dangerous,” Estrada said, referring to the mass shooting in August at a Walmart in El Paso, Texas. “It allows for white nationalist-identified people to act on their hateful thoughts. We see examples of that in El Paso. I see that [regarding incidents of racism] in my everyday life.”

Editor's note: A previous version of this story included NumbersUSA as being among the groups founded by the late John Tanton. The group was in fact founded by Roy Beck, a friend and former colleague of Tanton's. Tanton provided financial support to the group early in its history. NumbersUSA denies advancing the concept of demographic replacement. Nevertheless, the group's history as a hardline anti-immigration group is well documented. We regret the lack of clarity.