The Austin, Texas-based Zimmermann registered the domain late on Thursday night, March 14, 2019, according to hacked Epik data that activists leaked to the public in September. Tarrant entered the Al Noor Mosque and killed his first victim just a few hours earlier in New Zealand, based on the difference in time zone. 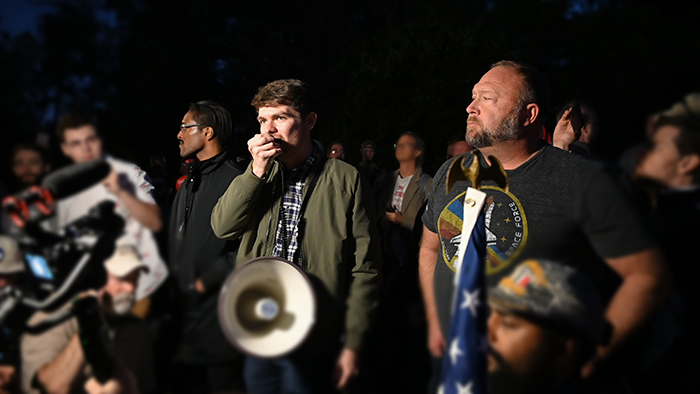 Nick Fuentes (center), Alex Jones (right) and Ali Alexander appear at a "Stop the Steal" rally at the Governor's Mansion in Atlanta, Georgia, on Nov. 19th, 2020, as the state finishes the recount in the Presidential election. (Photo by Zach Roberts/NurPhoto via Getty Images)

Jones’ conspiracy-driven, junk news website hired Zimmermann in 2015, based upon Hatewatch’s review of an archived Infowars podcast and Zimmermann’s social media profiles. Then-candidate Donald Trump appeared on Infowars as a guest at around the same time, thanks to the efforts of long-term Trump ally and Infowars guest Roger Stone. Although mainstream social media platforms banned Infowars in 2018, the site still plays an influential role with Trump’s base. High-profile Trump supporters such as Reps. Marjorie Taylor Greene and Matt Gaetz have contributed to Jones’ programming in the past. Critics have also noted the influence Jones appears to have on more widely seen right-wing programming, including Tucker Carlson’s FOX News shows.

“You want to hit thought leaders. You never know where these messages in a bottle are going to go. I’m not bragging when I say this, but when I talk to 95% of people who are activists and taking action, Infowars either totally woke them up or had a hand in that,” Jones said in a Sept. 23 broadcast of his show’s influence.

Zimmermann departed his director-level position at Infowars in March, according to his Linkedin account, but he appears to still work with Jones. Zimmermann signed an affidavit on Sept. 13, as part of the Sandy Hook defamation lawsuit against Jones and Infowars’ parent company Free Speech Systems LLC, claiming that he had continued to work as a consultant for the company. Hatewatch reached out to Zimmermann and Jones for a comment on this story but did not receive a response.

A small network of technical personnel backs Zimmermann in his work, and together, they bridge three platforms of critical importance to the fringe and pro-Trump far right: Infowars; Epik, a web-hosting company popular among the extreme right; and Nick Fuentes’ “America First” show, a nightly livestream featuring commentary from the 23-year-old attendee of the 2017 “Unite the Right” rally. Zimmermann himself appears to straddle these three groups. His account on the messaging service Keybase suggests that he serves as part of Nick Fuentes’ America First development team. He also joined Epik, the company from which he bought the domain, as the director of enterprise systems sometime in March 2021, according to his LinkedIn account and a bio he used on Twitter.

Jones made an oblique reference to a partnership between Infowars and Epik on an April broadcast of his show.

“We wouldn’t be around if it weren’t for Epik ...” Jones said. “They have all the services you need, and they are expanding. And, I can tell you they have also headhunted some of our crew over there. They’re such big fans.”

Likewise, Epik CEO Rob Monster referenced Zimmermann’s past work with Infowars multiple times in a Sept. 16 conference call. Zimmermann, Monster noted, was one of the “capable guys” that he had hired over the past year. He also referred to Infowars as “a gateway drug for truth” during the same call.

Hatewatch found 12 different people working together in a technical capacity across America First, Infowars, Epik and a livestreaming platform called Vieo.com, recently purchased by Epik. Over a span of 25 months starting in 2019, these individuals cumulatively registered approximately 212 different domains with Epik and organized eight different limited liability companies (LLCs). Zimmermann registered most of the domains and LLCs and appears to have the longest-standing ties to this tech network supporting these far right media companies.

The white nationalist Fuentes, like Jones, brought crowds of people to “Stop the Steal” rallies in the runup to the violence on Jan. 6 through his livestreams. Fuentes listed someone named “Zimmermann” and several colleagues including “ZoomerDev” and “Simon Sasquatch” on a Jan. 20 edition of his livestream, suggesting those three collaborators, and others, kept his work online through an independent website after YouTube and the gaming-themed platform DLive suspended his accounts.

“Zoomerdev? This guy is like a genius. I mean this guy has really been on the ball.” Fuentes said on his show of Zimmermann’s pseudonymous colleague. “Man. He’s the reason the show is up this week. And you know, we have other people helping but I gotta give special credit to him because he came up with the solution that put the show back up online on Friday and this week. And he's been on top of it and he's been smart and the guy’s like a young kid. ... Hats off to him. Hats off to Simon, Simon Sasquatch.”

Fuentes continued, singling out the person he called Zimmermann.

“And uh, Zimmermann's been helping us, he's been real hands-on. And we’ve just had a lot of help,” Fuentes added.

The man behind the “Simon Sasquatch” pseudonym Fuentes referenced appears to be someone with long-standing ties to the white supremacist movement. Before the “Simon Sasquatch” Fuentes referenced took on his current technical role at America First, a person going by the same pseudonym created promotional materials for the Charlottesville, Virginia, “Unite the Right” rally that descended into violence in August 2017, according to leaked chats published by the media collective Unicorn Riot. A person using the “Simon Sasquatch” handle also may have marched at a Traditionalist Worker Party-organized “White Lives Matter” rally in Shelbyville, Tennessee, in October 2017. One day after that event, a “Simon Sasquatch” and four people affiliated with the white nationalist group Identity Evropa participated in a racist protest outside the Burnette Chapel Church of Christ in Antioch, Tennessee, while traumatized victims of a September 2017 mass shooting prayed inside. 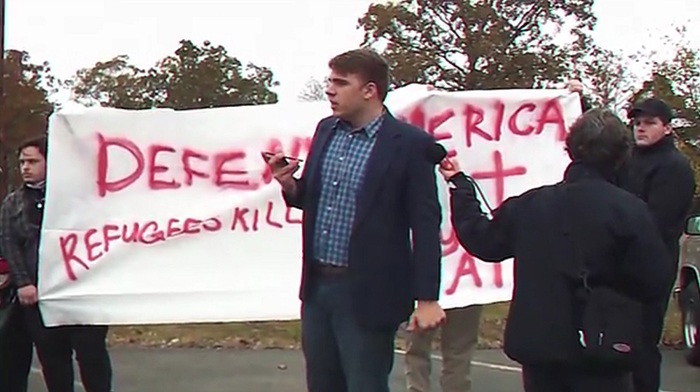 Simon Dickerman appears at a demonstration outside the Burnette Chapel Church of Christ in Antioch, Tennessee, in October 2017 among a group of far-right extremists.

Hatewatch reviewed public records and found a 24-year-old man based in Winter Springs, Florida, named Simon Dickerman. The person using the “Simon Sasquatch” pseudonym describes himself as living in Florida in the leaked chats published by Unicorn Riot. The Dickerman in Winter Springs created a Linkedin account, which shows someone who resembles the person pictured on the “Simon Sasquatch” Instagram account. Hatewatch emailed two addresses believed to be associated with Simon Dickerman from Winter Springs and messaged the LinkedIn account. No one replied.

In addition to domains that support Infowars’ work, such as “defendjones.com,” Zimmermann and his team bought up domains that appeared to reference far-right terrorism. A 28-year-old man named Timothy Thrift, who is listed on the Veio.com website as being the head of DevOps for the Zimmermann-run livestreaming platform, registered at least one other domain that references the Christchurch terror attack, called “sainttarrant.com.” Thrift also registered another two domains referencing “Right Wing Death Squads” on March 29, 2019, two weeks after Tarrant’s attack. Factions of the far right have used the phrase “Right Wing Death Squads” to laud authoritarian far-right dictatorships’ tendency to carry out extrajudicial killings.

Some members of the white power movement refer to those who commit acts of white supremacist terror as “saints.” These white supremacists, who embrace a tactic known as accelerationism, which seeks to destabilize countries such as the U.S., have co-opted Orthodox and Eastern Catholic iconography in some of their propaganda. Through internet memes, these activists depict mass murderers in religious vestments and adorn them with halos. Members of the white power movement have long drawn on religious imagery and terminology, describing their deceased terrorists as “martyrs.” Hatewatch could not determine Thrift’s motives in evoking these memes through the domain names or whether he did so intentionally. Hatewatch reached out to an email address he listed with Epik according to the data leak to ask him about the domains, but no one responded.

Hatewatch verified Thrift’s involvement with Vieo.com through a combination of public records and the company’s own website. These records list Thrift as a managing member of Atomial, along with Zimmermann. Hatewatch identified the connection between Atomial and Vieo.com via the livestreaming platform’s website, which identifies Atomial as the copyright holder.

Zimmermann registered websites with names such as “shooterchan.com” and “shooterchan.org” two days after website service providers broke ties with 8chan, the forum where far-right terrorists posted their manifestos during the Trump presidency. Some far-right activists who promote accelerationism congregated on 8chan at that time and advocated for white supremacists to carry out mass shootings, although it is unclear whether Zimmermann sought to reference that phenomenon. Neither of the two domains Zimmermann registered are currently working. Hatewatch searched internet archives and could not find any previous websites tied to those domains. The very existence of sites like 8chan has provoked debate, with defenders suggesting they have a right to exist as protected by the First Amendment – despite entertaining communities of people who praise murder and terrorism.

Monster, who allegedly started an Epik staff meeting by instructing attendees to watch footage from the Christchurch terror attack in an effort to convince them that someone staged it, has denied being a white nationalist to Hatewatch and other publications. Hatewatch’s review of Epik’s leaked data reveals not only the extent to which those who involve themselves in hate movements embrace his company, but it also shows Monster’s willingness to work directly with extremists.

Far-right propagandists associated with groups as extreme as the terroristic neo-Nazi group Atomwaffen Division began flocking to Monster’s services in 2018 as they were removed from more mainstream providers. In addition to Jones, some of Epik’s larger clients include Twitter knockoffs Parler and Gab, whose users have engaged in infamous acts of political violence. BitChute, a YouTube clone that has hosted footage featuring acts of white supremacist terror, also works with Epik.

Monster appeared on a podcast hosted by neo-Nazi Joseph Jordan in January 2019 and complimented the white supremacist David Duke.

“You look at a guy like David Duke for example, and he has some far-right views and so forth,” Monster told Jordan on that show. “But he’s actually a pretty clever guy, he’s articulate. He knows history. And I don’t know the body of his work, but I have a feeling that many people grew up with this mindset that you shouldn’t listen to anything David Duke says.”

Monster later told Hatewatch that he disagrees with Duke’s racist worldview and that he had not been aware of Jordan’s associations with neo-Nazism at the time he agreed to speak to him. Hatewatch emailed Monster for a comment on this report, but he did not respond.