Hatewatch has identified seven members of white nationalist hate group Patriot Front who were involved in a fatal car crash near Wellington, Utah, on Feb. 28, 2021.

One of the men, Kevin J. Bersuch, died at the scene of the crash on U.S. Highway 6 in the state’s northeast. Six others, including Patriot Front leader and founder Thomas Rousseau, were hospitalized. Sources have told Hatewatch that Rousseau’s injuries were serious, requiring emergency surgery.

According to a timeline established through leaked documents and sources familiar with the circumstances of the accident, the crash came at the end of a flurry of flyer distribution, vandalism and rallies targeting Utah in February 2021. Later, Patriot Front had to contend with online accusations that the accident was a result of Rousseau pushing members too hard in his efforts to propagandize and recruit in the state, a claim that Rousseau emphatically denied in leaked internal Patriot Front communications. 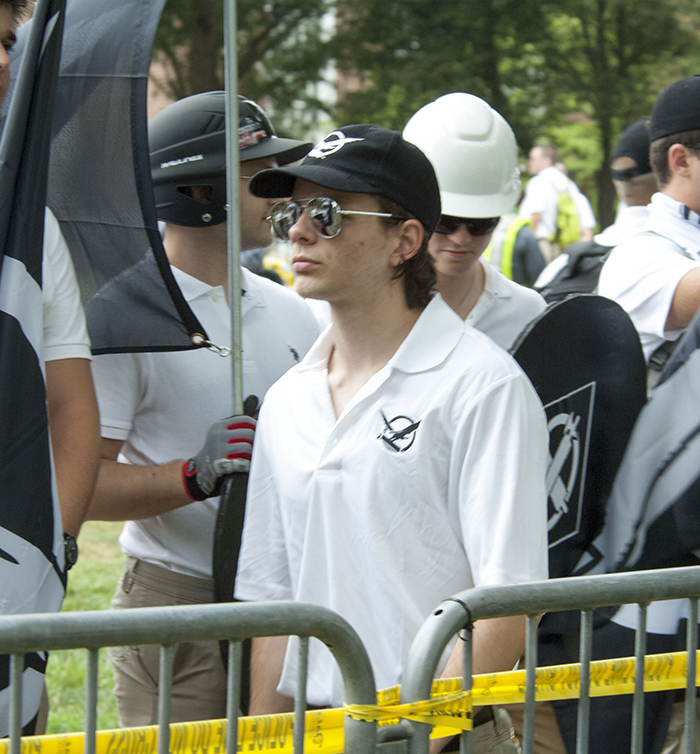 Thomas Rousseau, founder and leader of Patriot Front, is seen at the Unite the Right Rally in Charlottesville, Virginia in 2017. (Photo contributed)

Patriot Front have never publicly acknowledged that the crash happened. In May 2021, on their Telegram channel, they even backdated footage of a Salt Lake City action to March 2021, a date which is difficult to reconcile with the serious injuries sustained by Rousseau on Feb. 28. According to private communications provided to Hatewatch by a source close to Rousseau, the hate group's leader required artificial respiration, surgery and an implant to stabilize his injured spine. A second source who is close to Rousseau confirmed the extent of his injuries in a telephone conversation.

Hatewatch obtained a Utah Department of Public Safety (DPS) crash report on the incident with a public records request. The December 2021 request was initially denied “due to ongoing investigation or criminal prosecution,” but the records were released in early March.

The report says that at 6:08 a.m. on Feb. 28, 2021, a Toyota Sienna minivan being driven by Ryan M. Stoneburner, 24, of Belton, Texas, was apparently traveling “at a high rate of speed” on U.S. Highway 6 near Wellington, when it “left the roadway to the right, went airborne twice, went through a fence and impacted the vertical embankment of a wash.”

The vehicle then “flipped upside down, coming to a final rest,” the report adds.

Thomas Rousseau was in the front passenger seat of the van, according to the report.

According to the report, Bersuch, 21, of Hamburg, New Jersey, was pronounced dead at the scene of the crash after being fully ejected from the van.

The five remaining passengers and Stoneburner, the van’s driver, were transferred to hospitals in Salt Lake City and Price, Utah, and Grand Junction, Colorado, the report says.

A Carbon County Justice Court official confirmed in a telephone conversation that Stoneburner had been charged with and convicted of reckless driving following the crash.

The journalism collective Unicorn Riot published leaked chats from Patriot Front earlier this year, which have been the basis for widespread reporting, including on Hatewatch.

In the chats, a Patriot Front member writing under the alias William TX privately messaged Rousseau to inform him: “i pled no contest and have 180 days suspended pending completion or payment of 69 community service hours. I am also on probation until the hours are completed or paid off.”

The crash report does not assign any fault to Rousseau for the accident, and no charges against him were filed.

Hatewatch attempted to contact Stoneburner – who has no publicly listed email addresses or telephone numbers – via a close relative who reportedly resides at the same residence as Stoneburner, according to records obtained from data services.

Stoneburner did not respond to the request before publication time.

Along with Rousseau, Stoneburner and Bersuch, the car’s passengers included Antonio Barr, 24, of Killeen, Texas; Steven D. Tucker, 29, of Garland, Texas; Braden K. Kormos, 29, of Kemp, Texas; and Graham J. Whitson, 30, of Grapeview, Texas, according to the crash report.

Hatewatch has discovered that two of the men have faced or are facing charges in alleged incidents unrelated to the crash.

Steven Tucker has been charged with aggravated assault with a deadly weapon in Texas after allegedly threatening his roommate with a knife in Mesquite, Texas, on Aug. 14, 2021.

He is out on bail amid an ongoing prosecution over that incident.

Hatewatch contacted Steven Tucker by telephone about the crash and his felony assault charge. Tucker denied all knowledge of the crash, and of Patriot Front, as well as of the assault charge.

When he was informed that his name and the telephone number through which Hatewatch had contacted him had come from the Utah DPS crash report and Dallas County Court records, he said, “This is the first I’m hearing of it.”

When Hatewatch thanked him for his time in concluding the call, Tucker said, “You’re not welcome.”

Antonio Barr, meanwhile, was arrested in Round Rock, Texas on May 16, 2020, and charged with a misdemeanor graffiti offense. Court proceedings in that case extended into April 2021, according to the Williamson County District Court’s online docket.

A request to Williamson County for the full record of the case had not received a response by publication time, but a spokesperson for the Round Rock Police Department told Hatewatch in an email that Barr’s “graffiti included the words ‘'PATRIOTFRONT.US,’” the URL for the hate group’s website.

Hatewatch contacted Barr by telephone for comment on the crash and the graffiti offense charge. He took the call but refused to speak before abruptly hanging up.

Hatewatch also reached Braden Kormos by phone, and he declined to comment on the incident.

Graham Whitson is both a member of Patriot Front and a camera operator for the closely aligned propaganda operation Media2Rise, which was founded by Robert Rundo, also a leader of white nationalist hate group Rise Above Movement (RAM), who now lives in Serbia. On Feb. 10, Judge Cormac Carney reopened the trial of Rundo and three other members of RAM after prosecutors successfully appealed his 2019 dismissal of federal riot charges against the men. The charges arose from RAM's alleged planning for violence at counterprotests in Southern California and beyond. Rundo is due to appear in court in Santa Ana, California, on Dec. 22.

Hatewatch requested comment from Whitson via the general email address of Media2Rise, but there was no immediate response.

Patriot Front is known for posting propaganda flyers and committing acts of hateful and destructive vandalism around the country. Founded after the deadly “Unite the Right” rally in Charlottesville, Virginia, the white nationalist hate group uses flash rallies and banner drops to circulate its racist message. The group has also publicized activities including stenciling and the defacement of murals dedicated to Black, LGBTQ, and immigrant civil rights.

Hatewatch reviewed these leaked documents and found that nearly one in five applicants to Patriot Front claimed to hold current or former military status.

In the weeks leading up the crash, Patriot Front’s Telegram channel publicized eight flyering and stenciling incidents in Utah. Following consistent activity in January and February 2021, there was then a month-long gap in Telegram posts on Utah flyering between Feb. 23 and March 24. In April, the channel advertised 19 such actions.

In May, Patriot Front posted footage on Odysee, a video-sharing platform popular with white supremacists, of a rally in Salt Lake City, Utah. In the post, Patriot Front claimed the rally shown in the video had occurred in March—which would have been just weeks after the deadly crash—and under Rousseau’s direct leadership in March. 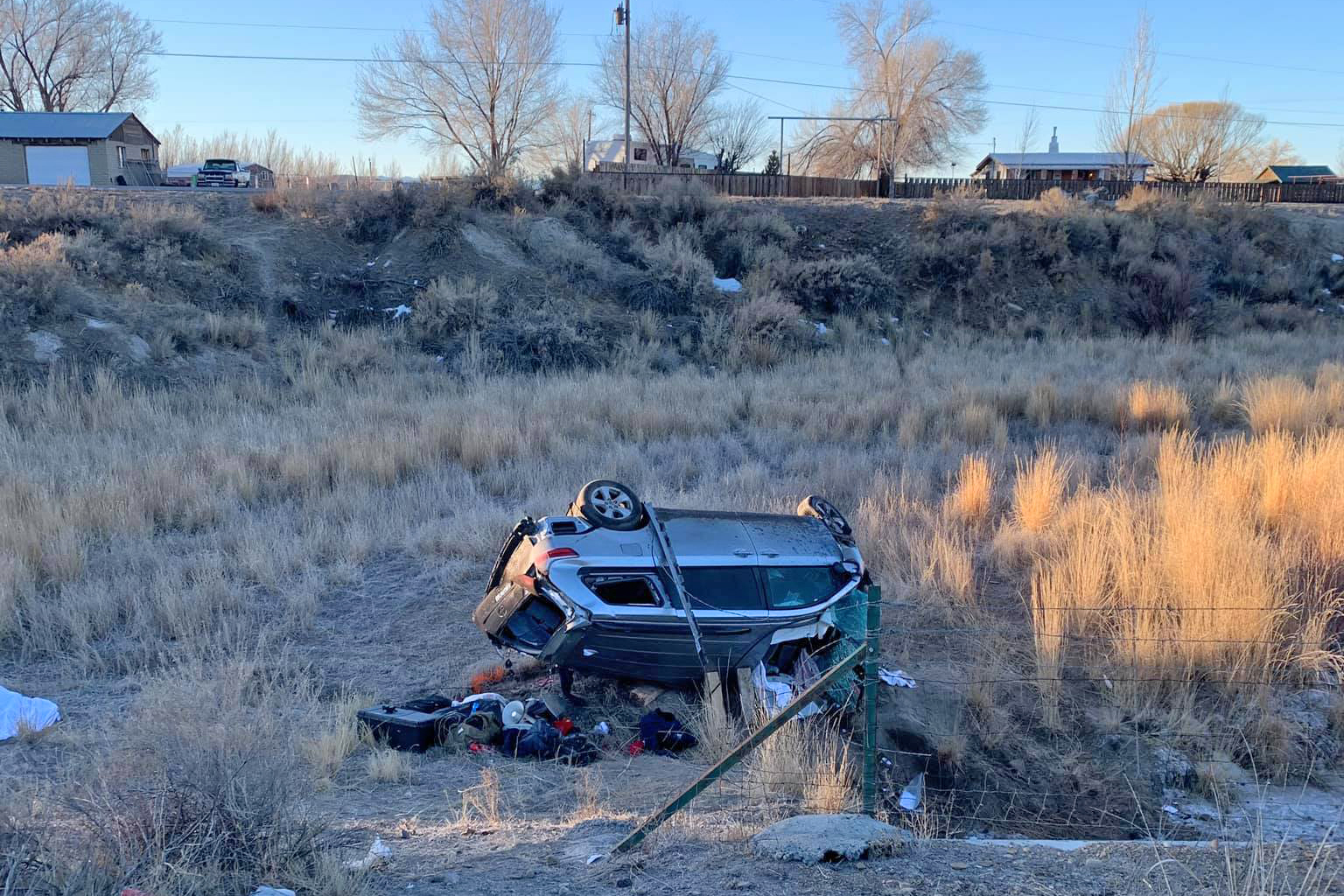 The crash site in Wellington, Utah. (Photo by the Wellington Police Department via Facebook)

However, additional information about the extent of Rousseau’s injuries casts doubt on the timeline promoted by the group in its propaganda channel.

The leaked Patriot Front chats show that one commenter on site where the rally video was shared blamed Rousseau for the fatal crash.

On Dec. 8, 2021, members posted a screenshot to the group’s internal chat showing comments on the video sharing site from someone posting under the name Vincent Washington, who presented himself as having inside knowledge of the group and the incident.

The poster blamed Rousseau for the death of Bersuch, whom they referred to by his movement name, Ulysses, writing, “Thomas forced the driver to keep going despite falling asleep at the wheel and they drove off the road killing Ulysses.”

The poster suggested that Rousseau had downplayed the extent of his injuries within Patriot Front, writing that “Thomas was in a coma for a few days. … Thomas was in a wheelchair shitting in a bag. … Patrick NY had to change Thomas’s shit bag.”

In the chats, Rousseau characterized the poster as “an ex-member who is siding with anything but us because he’s upset he got removed years ago,” and denied most of the claims made in the thread, including the accusation that he shared responsibility with Stoneburner for the accident.

He wrote that “I didn’t force the driver to do anything. I was asleep myself, and had no conversations with the driver in any time around the incident. … Any fault is forgiven absolutely because the driver himself was the one who brought help to the scene.”

There was no indication in the available data that Stoneburner was a participant in this chat.

Photo illustration by SPLC. From left, Ryan Stoneburner, Kevin Bersuch and Thomas Rousseau. Stoneburner was behind the wheel during the fatal Utah crash, and Patriot Front leader Rousseau was critically injured. Bersuch, 21, died at the scene.