An unidentified person donated over 2 million U.S. dollars in Bitcoin to an address advertised on the conspiracy website Infowars in April, Hatewatch found, potentially buoying the finances of embattled extremist Alex Jones. 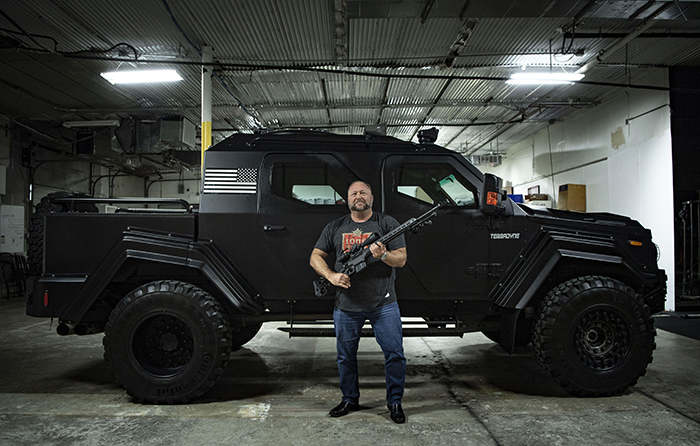 The person donated 52 Bitcoin to Jones over two transations, which traded at around $40,000 apiece when they occurred. During an investigation of Jones’ known wallets, Hatewatch found that he demonstrated an increased appetite for cryptocurrency starting in April 2021, around the same time that industry boomed and his standing in the Sandy Hook defamation lawsuit took a significant blow.

Sandy Hook families filed a motion on April 6 claiming that Jones moved his funds to shell companies in order to avoid paying money he owes in compensation for the historic defamation case. The court found the Infowars chief liable for damages after he repeatedly claimed that the 2012 shooting rampage, which killed six adults and 20 primary school children, never happened. Far-right extremists have exploited loose regulation around cryptocurrency to obscure the nature of their funding, as Hatewatch previously reported, but it remains unclear whether Jones has done anything similar.

Jones launched a new “crypto” page to solicit donations on his conspiracy website Infowars.com on April 7, 2021, two days after the U.S. Supreme Court denied him a critical appeal in the Sandy Hook case. Jones had for years expressed skepticism about cryptocurrency prior to shifting more of his attention to the emerging investment space. In addition to that million-dollar donation, supporters of Jones’ far-right activism have flooded him with more than $330,000 worth of Bitcoin and Ethereum since he involved himself in cryptocurrency, Hatewatch found. Jones’ current holdings put him in a class with some of the largest accumulators of cryptocurrency among far-right extremists.

Cryptocurrency represents just a fraction of Jones’ estimated fortune. Hatewatch reported on April 6 of this year that Jones drove significant traffic to his Infowars store while pushing the “Stop the Steal” campaign that ultimately evolved into an attack on the U.S. Capitol. Hatewatch reported in March 2021 that Jones had boasted to a videographer about making $60 million in 2018, while also mocking Trump and his own fans. Records first obtained by HuffPost demonstrated the plausibility of the quip, showing Jones’ e-commerce website made $165 million from 2015 to 2018. Infowars and two other companies owned by Jones, Infowars Health and Prison Planet TV, filed for bankruptcy on April 18. Hatewatch reached out to Jones for this and other stories about his finances. He has never responded.

What we know about Jones’ million-dollar Bitcoin donations

Jones first received 26 Bitcoin from the anonymous donor at 4:35 a.m. coordinated universal time (UTC), according to the blockchain timestamp, which would be just before midnight in Texas, where the Infowars host lives. Jones listed three different Bitcoin addresses on his website Infowars starting in April 2021. The address the anonymous donor sent the Bitcoin to is the third one, opened on March 30, 2022. Jones then added a fourth wallet to his website on April 28. Donors had sent that address 0.3771955 Bitcoin across 42 transactions, worth a total of about $37,000 at the time of transfer, before the anonymous megadonor filled it with 26 Bitcoin. 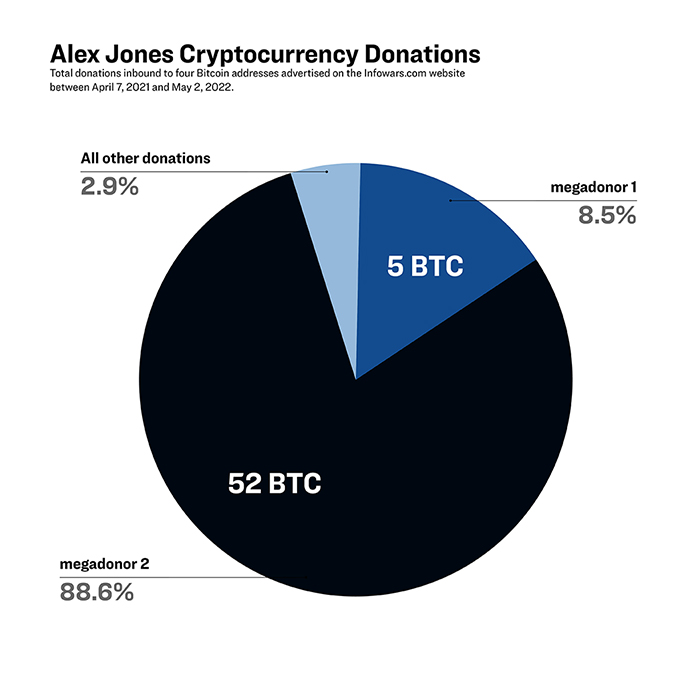 Total donations inbound to four Bitcoin addresses advertised on the Infowars.com web site between April 7, 2021, and May 2, 2022

Jones appears to have transferred the initial $1 million donation elsewhere on April 27, 2022, at 7:30 p.m. UTC, which would have been early afternoon in Texas. Including the additional money Jones had in the account at that time, he transferred out $1,387,673.19 worth of Bitcoin that day.

One day after Hatewatch published a story about the original donation worth over $1 million, the same person donated an additional 26 Bitcoin to Jones, bringing the total amount to above $2 million. They sent the money on April 30 at 8:59 p.m. UTC, according to the blockchain timestamp. Jones appears to have withdrawn the second donation of 26 Bitcoin on May 3.

The massive donation of 52 Bitcoin represents about 88.6% of what Jones has received in that cryptocurrency, according to Hatewatch’s calculations. Whoever transferred the 52 Bitcoin to Jones split it off from a larger cache of just under 258 tokens of the digital asset that they hold in total from the same account. Hatewatch’s analysis of the blockchain indicates that, before being funneled to Jones, most of that cache of 258 Bitcoin had not been touched since 2016.

One of two Jones Bitcoin megadonors

Prior to this recent infusion of money, another megadonor gave Jones a total of five Bitcoin across six separate transactions in 2021, worth a total of $266,000 at the time they transferred it. This amount represents roughly 15% of Jones’ current known Bitcoin holdings. Hatewatch has not yet identified the person behind the donations, but they appear to have controlled at least 3,000 Bitcoin at the time they made the donation and actively traded in Bitcoin as early as 2011.

Jones’ other mystery megadonor pumped roughly $266,000 worth of Bitcoin into his wallet at a time when the extremist sought support for his Sandy Hook lawsuit defense. Starting in April 2021, the megadonor split their donations to Jones from a cache of 1,000 Bitcoin, Hatewatch found. That megadonor sent six donations to Jones among a flurry of transfers to the cryptocurrency exchange Gemini and other similar businesses. The megadonor sent Jones between 0.25 and one Bitcoin during each transaction. (Those transfers were worth between $13,000 and $63,000 when they occurred.)

Jones also holds Ethereum tokens and listed several addresses for that cryptocurrency on his Infowars website. One donor transferred a total of 1.2 Ethereum to Jones in two transactions in November 2021 and January 2022, worth about $7,800. The Ethereum donor sent similar amounts to other far-right groups including Idaho Freedom Foundation, Slightly Offensive and Defend Europa, Hatewatch found. The same donor also sent cryptocurrency to prominent American white nationalist groups such as VDARE and American Renaissance on the same day they donated to Jones.

Jones also traffics in Infowars-branded Non-Fungible Tokens (NFTs), which are traded in a similar manner to cryptocurrency. He promised to issue more of them during an April 27 broadcast.

“We’ve got our own NFTs that aren't a scam, and they’re totally bad-ass and total victory. Coming out next week,” he said.

From ‘bad news’ to big money

Jones started to change his tone about cryptocurrency significantly in 2021. Less than three years earlier, he disparaged Bitcoin as “bad news.”

“Let me be conservative,” Jones said on a Dec. 28, 2018, livestream. “I could have made, the last six, seven years, 300 million dollars literally going with all the Bitcoin people and everything else. I know what people got paid. I had him offering me a million a month. Real companies, just two years ago. And I never endorsed it because I thought at the end of the day it was gonna be like the tulip, you know, fiasco in the Netherlands a couple hundred years ago. I’m not saying crypto isn’t real. I’m not saying digital currencies aren’t okay. I said it was bad news.”

Jones made other negative comments about Bitcoin in recent years. Jones appeared as a guest on the “Joe Rogan Experience” podcast in February 2019 and used the appearance to claim that he turned down $5 million worth of Bitcoin from George Soros in exchange for pumping it. Jones frequently invokes Soros’ name in his diatribes, setting him up as an antisemitic caricature of a “new world order” liberal who he opposes. He later hedged his refusal of the supposed offer by adding: “I believe in Bitcoin, I believe it’s the future.” Jones also referred to Facebook’s flirtations with cryptocurrency as “the mark of the beast” in June 2019.

Max Keiser, a host on Russia Today (RT), television commentator and longtime Bitcoin supporter, appeared as a guest on Jones’ Infowars show in May 2020 to speak about cryptocurrency. Far-right extremists, including the neo-Nazis at Daily Stormer, have cited Keiser’s views on cryptocurrency in the past, as Hatewatch previously reported.

Jones complained to Keiser during that 2020 appearance that he was “so behind the curve [on Bitcoin].” Keiser responded that he could “make” him get into Bitcoin. Jones responded, “You're raping me.” Keiser replied, “Well, it’s love, Alex.”

Jones also claimed in February 2021 to have lost a laptop that Keiser gave him with 10,000 Bitcoin on it.

“I swear to God this is real,” Jones said to his audience. “I didn’t know Keiser was, like, hooked up with Putin and the Easter Bunny.”

Keiser’s push for Jones to embrace Bitcoin may have worked. The two started to work together on Swan Bitcoin, an investment company in which the RT personality serves as a principal adviser, soon after that conversation. In March 2021, Jones promoted to his audience a pay-for-referrals plan with Swan Bitcoin, meaning that his viewers could use a special link to sign up for the service and receive 10 dollars’ worth of Bitcoin as a sign-up incentive. Swan Bitcoin features an endorsement from Jones on its site calling it “the best way to accumulate Bitcoin.”

On March 25, 2021, Jones invited Keiser on a show he branded “The Bitcoin Civil War.” During that episode, both men promoted Swan Bitcoin affiliate links. Jones also lamented investing late in the cryptocurrency space.

“I am literally in league with you now,” he told Keiser.

Editor’s note: This story has been updated to include details of a second $1 million Bitcoin donation made after publication.