In leaked audio first reported by the U.K. outlet Byline Times, a voice that seems to belong to YouTube performer Paul Joseph Watson utters a string of racist and anti-gay epithets before stating that he wishes someone would “press the button to wipe Jews off the face of the Earth.”

The Byline Times reports that they verified the voice on the recording as Watson's via identifications from three of his associates, and though Hatewatch has not done any independent reporting on its authenticity, staff reviewed the audio and confirmed the voice sounds like Watson. The recording helps illustrate the darker side of a right-wing YouTube subculture that boasts a massive viewership worldwide. Researchers have also consistently linked that subculture to the radicalization of far-right extremists. YouTube has taken steps to remove some high-profile extremists from their site in recent years, but allowed most others to stay, including Watson.

The voice says in the leaked clip, “I care about white people and not sand [n-word] Paki Jew f****t c****s, yeah?” It continues, “I really think that you should press the button to wipe Jews off the face of the Earth.” According to the Byline Times investigation, Watson made the comments recently at a party in the U.K.

Watson’s YouTube channel boasts nearly 2 million subscribers as of the publication of this analysis. He has racked up 1.2 million followers on Twitter, where the site awarded him with a verified account. Of the major social media websites, only Facebook suspended his account, doing so as part of a push that included his former collaborator Alex Jones and fellow bigot Laura Loomer in 2019. Hatewatch reached out to Watson and his legal team for a comment, but they did not respond. Hatewatch also reached out to YouTube and Twitter about Watson, and neither responded.

The quiet part out loud

Watson reached the heights of celebrity in pro-Trump circles while serving as a complementary personality to Jones on the conspiracy website Infowars. He left Infowars in 2019 to form the junk news blog Summit News. The move to separate himself from Jones may have helped Watson hold onto his YouTube account while his peers at Infowars lost theirs.

Known for posting heavily edited clips to YouTube where he mugs to the camera while ranting, Watson has for years promoted hard-right causes online. He repeatedly derides “modernity” in his videos, a word that serves as a stand-in for liberalism, mainstream culture and anyone arguing for LGBTQ rights. He has paid acute attention to U.S. politics as a commentator despite living in the U.K. Watson has also steadfastly promoted former President Donald Trump, going back to the time before the hard-right, anti-immigrant politician secured the GOP nomination in 2016. 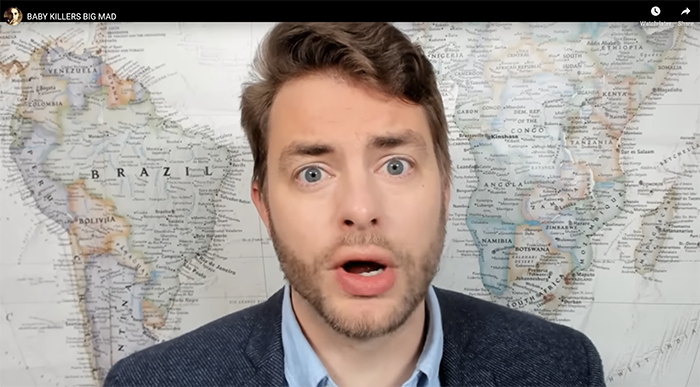 Watson has typically been careful while appearing on YouTube, which is what makes the leaked audio of his rant noteworthy. Watson applies a consistently negative focus on immigrants on YouTube and Twitter, particularly Southeast Asian and Middle Eastern Muslims. But he does not typically delve into the sort of vulgarisms and slurs that the tape showcases him using in private. He also has used the overtly antisemitic “echoes” meme, wherein a person puts triple parentheses around a name or word to single it out as being Jewish. But Watson often avoids blaming Jewish people directly for what he bemoans about liberalism, which puts him in contrast to neo-Nazi commentary on the Daily Stormer.

The audio helps illustrate that Watson’s hard-right ideology is undergirded by overtly racist and antisemitic sentiment and serves as a reminder that YouTube continues to profit from hatred.

Implications for the self-described 'New Right'

Watson is among the first pro-Trump figures to adopt the banner of “New Right,” which is the latest phrase racist, hard-right political actors in the West have coined in an attempt to rebrand themselves. He has also associated himself with other social media performers from the Trump era, such as hard right operatives Jack Posobiec and Mike Cernovich, who continue to maintain a presence on social media despite promoting hate, extremism and rampant disinformation. The U.K. civil rights group Hope not Hate published photos in 2019, around the time of the time of the annual Conservative Political Action Conference (CPAC), showing Watson dining with Posobiec, lawyer Will Chamberlain and pro-Trump kickboxer Andrew Tate, a man whose home police recently raided in a human trafficking investigation. 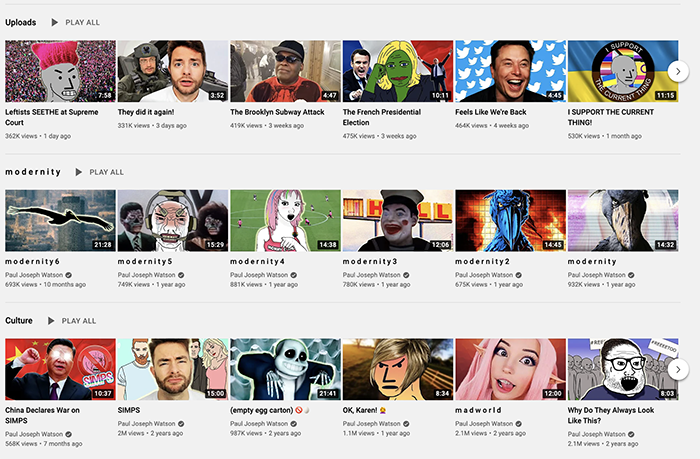 Watson has also helped produce immigration-focused content in 2017 for fellow YouTuber Tim Pool, whose own show on the streaming site has taken an angrier, darker and more bigoted tone in recent years. Hatewatch reported on May 5 about how YouTube allowed Pool’s viewers to pay to make comments appearing to call for violence through the site’s Super Chat function. Pool and Watson currently produce some of the most-viewed hard-right content YouTube airs. Watson also collaborated frequently with Canadian white nationalist Stefan Molyneux before Molyneux lost access to YouTube and Twitter in 2020.

Watson and his associates have claimed to represent something different from the “alt-right” movement, which peaked at the deadly, explicitly white supremacist “Unite the Right” rally in Charlottesville, Virginia, on Aug. 12, 2017.

“How many times do myself, [Jack Posobiec, and Mike Cernovich] have to be attacked by the alt-right before the media stops calling us alt-right?” he published to Twitter three days after the “Unite the Right” rally in 2017. “How many times do I have to remind them that I distanced myself from the ‘alt-right’ 9 months ago, just weeks after the election?”

Watson attached to that post a statement in which he implies that he is part of the “New Right.” He suggests that this category of personality represents something definitively different from the white supremacist alt-right movement. Nearly five years and one leaked audio clip later, it is becoming much harder for the casual observer to spot any differences at all.