Members of the of the Libertarian Party (LP) are concerned about the Mises Caucus (MC) winning control of the party at the May 26 national convention, ushering in an era of collaboration between the U.S.’s largest third party and the hard-right movement inside the Republican Party.

High-profile MC members espouse hateful rhetoric and collaborate with white nationalists and individuals linked to former President Donald Trump. Should they win control of the LP, they will take over a party that averages over 1% of the vote in national elections, peaking at 3.3% in 2016. Commentators argue libertarian candidates cost Trump at least three crucial swing states in the 2020 election – Arizona, Georgia and Wisconsin – all of which President Joe Biden won by less than 1%.

Collaboration between the LP and hard-right wing of the Republican party would stop this from happening again, LP members told Hatewatch.

The MC has already won control or decision-making influence over several state parties. These include such swing states as Arizona, New Hampshire, Pennsylvania, Minnesota and Colorado. Florida and California are also close to the MC.

Now that the MC has risen to power within the LP, some critics say they fear bigotry and bullying will flood LP ranks.

LP donations have missed targets and members are fleeing the party, according to David Valente, a former alternate member of the Libertarian National Committee (LNC) and LP member since 2012.

“The purpose of what is going on with the MC … is to sabotage the LP to sideline it over the next few years for Donald Trump,” Valente told Hatewatch.

Valente resigned from the LNC on Oct. 2, 2021, citing health concerns. Rising bigotry and harassment inside the LP, stemming from the MC, also contributed to his resignation, he said.

Angela McArdle, chair of the Libertarian Party of Los Angeles County, Mises Caucus member and candidate for the 2022 LP national chair, told Hatewatch bigotry is not part of the MC strategy. “We’re grateful for the opportunity to help people let go of collectivism as they search for the truth and find their way to liberty. We will always fight for the freedom of all people."

The MC has adopted a hard-right approach to attract supporters, mimicking the “paleo strategy” from the early 1990s created by Murray Rothbard and Lew Rockwell. Rothbard and Rockwell used the strategy to appeal to far-right conservatives and authored a newsletter that trafficked in anti-immigrant talking points, race science and anti-LGBTQ ideas.

The MC and its members have argued for limited immigration enforced by property owners on the border and police action against Black Lives Matter and antifa protesters. They’ve also made anti-trans remarks. Mises-controlled Montana removed the right to abortion from its platform.

Ashley Shade, the former chair of the Massachusetts LP, resigned her post after her state party expelled Mises Caucus members over claims of harassment and demands to hold an early convention. Shade, who is trans, asserted in an April 10 Facebook post that MC bigotry and harassment had prompted her recent absence from social media.

Shade wrote she “was successful in teaching many people about Trans rights and issues,” but she “experienced more harrasment [sic] and threats than support.” Shade called the MC a “cult” and a “tool of the Republican Party.”

The MC has links to Trump’s orbit. John Hudak, an LP member and former member of the Mises Caucus, shared screenshots of private Mises Caucus-linked groups on social media. Hudak also runs Fakertarians, a blog dedicated to addressing bigotry in the LP. 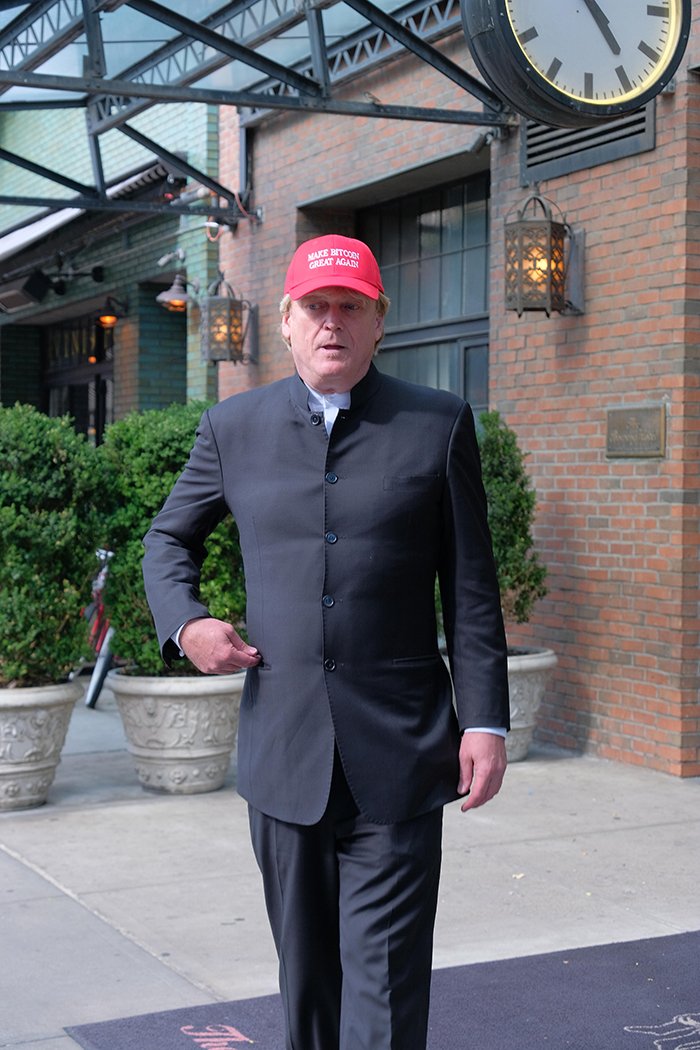 Byrne was a regular visitor to the White House in the waning days of the Trump administration. He spoke at the Jan. 6, 2021, Trump rally in D.C. that preceded the insurrection. He authored a book based on spurious claims that election fraud cost Trump the 2020 election and was the main financier of the audit of the Arizona’s Maricopa County election results.

In one screenshot, Heise announced a “private meeting” with Byrne and others on July 11, 2018.

Heise claimed in a Sept. 12, 2019, post that Byrne donated $5,000 to the caucus in 2017 after the two met at the Nexus conference, a gathering dedicated to a cryptocurrency Collin Cantrell founded. Cantrell’s father, Jim, is on the Mises political action committee advisory board and the Mises Caucus board. Jim Cantrell was on the founding team of Elon Musk’s SpaceX.

Byrne did not respond to Hatewatch’s request for comment.

In March, Heise nominated Daryl Brooks for the LP candidate for Pennsylvania governor after the caucus swept leadership elections at the state convention.

Brooks has run for state and local office in New Jersey as a Libertarian since 2009.

Trump’s former attorney and adviser, Rudy Giuliani, called Brooks as his first witness alleging widespread voter fraud in the 2020 election at the infamous press conference outside the Four Seasons Total Landscaping in Philadelphia.

Brooks is also a convicted sex offender. His nomination was invalidated due to residency requirements, according to LP insiders who spoke to Hatewatch.

Heise did not respond to Hatewatch’s request for comment sent to the email listed on the MC website.

The MC first made national headlines in June 2021, when members of the Mises Caucus won control of the New Hampshire state party, prompting an internal power struggle and resignations.

An August 2021 report on the power struggle prepared by the LP noted “several Libertarians” were concerned by talk of Steve Bannon working with the Mises Caucus to “take the Libertarian Party off the ballot in New Hampshire and other states,” which Heise rejected.

The New Hampshire Mises Caucus includes Jeremy Kauffman, who authors anti-trans tweets on his own account. Kauffman was a spearheading member of the New Hampshire takeover and is the LPNH nominee for a New Hampshire senate seat. Kauffman is CEO of LBRY, a decentralized, blockchain-based network service. LBRY owns Odysee, a YouTube alternative that hosts far-right and neo-Nazi content.

Bannon did not respond to Hatewatch’s request for comment.

When Vice President Kamala Harris tweeted in support of Biden signing an anti-lynching bill that made the heinous act a hate crime, Kauffman responded, “As a Senator, I promise to legalize lynching anyone who works for the IRS.”

The MC has also welcomed antisemitic speakers. The California MC invited Bryan “HotepJesus” Sharpe, a prominent figure in the Hotep movement, to speak at an event in May 2021.

In response to a question about Sharpe’s antisemitism, McArdle told Hatewatch the “Libertarian Party and broader liberty movement have always been led by and included brilliant Jewish people, and we welcome members of the black community to our movement, as well.”

‘Part of the Problem’

Critics of the Mises Caucus expect the group to nominate comedian Dave Smith for president. Smith, too, has floated the idea.

Smith, who is Jewish, has long invited extremists and hard right and fringe figures – including HotepJesus – on his podcast, “Part of the Problem” (PotP). Smith has also appeared on podcasts hosted by extremists.

Smith posts PotP episodes on his YouTube channel, which has over 77,000 subscribers. Recent videos receive roughly 25,000 views, as of early April 2022.

Smith’s fans frequently post racist and antisemitic thoughts online. A source gave Hatewatch screenshots of “Part of the Problem Inner Circle,” a group dedicated to the podcast hosted on MeWe, an alternative to Facebook popular among libertarians.

The posts include racist, antisemitic and homophobic slurs. They also shared links to articles supportive of Trump’s “Stop the Steal” conspiracy theory that claimed Democrats stole the 2020 election. The conspiracy theory culminated in the Jan. 6, 2021, insurrection at the U.S. Capitol.

Smith is active in the group, though screenshots of Smith’s activity that Hatewatch reviewed were taken after the slur-filled posts. Hudak, a former member of the group, said members post racist and antisemitic posts “all the time. He knows his fans are like this.”

Fuentes and Smith debate their respective viewpoints, with Smith arguing for hard-right libertarian viewpoints while Fuentes advocates for using the U.S. government to protect the interests of white people.

Smith pushed back on the idea of a white ethnostate during the 2021 debate. However, he has leaned on the history of Mises figures like Murray Rothbard working with “paleoconservatives” such as Pat Buchanan, whom Fuentes and his followers admire.

During their first debate, Smith argued for limited immigration, “freedom of association” that would allow workplace and housing discrimination and limiting migration to combat demographic change.

Smith made similar remarks in a podcast with Michelle Malkin, a conservative commentator with longstanding ties to the racist right. Smith’s YouTube channel made private its copy of their discussion.

The appearance caused controversy among his supporters. The comic addressed the issue in a podcast, which is now private. Hatewatch obtained a copy of the episode.

Smith acknowledged concerns but said the notion there are racial differences in intelligence is “scientific fact.”

Smith told Cantwell on his podcast he was “sympathetic to the alt-right to a large degree” but he disagreed with the alt-right’s tactics.

Smith said the “left-wing interpretation of you guys is complete bullsh*t.” During the conversation, Smith made anti-trans remarks, calling transgender people “liars.”

The conflict between Mises libertarians and elements of the LP began in 2017. Jeff Deist, the president of the extremist Mises Institute, wrote a blog calling for a “new libertarian” to replace the establishment leadership of the LP.

Deist wrote that “blood and soil … still matter to people,” and libertarians should not ignore it. Deist did not elaborate on his meaning in selecting that phrase, but “blood and soil” is a known hate slogan with origins in Nazi Germany that white nationalists still use today.

The Mises Institute published the blog on July 28, 2017, two weeks before white nationalists chanted “blood and soil” in Charlottesville ahead of the deadly rally.

Nicholas Sarwark, chair of the LP from 2014 to 2020, signed an open letter against fascism in the libertarian movement after Charlottesville. Several organizers of the white nationalist rally, Cantwell, Michael Peinovich and Augustus Invictus all claimed to be libertarians at some point.

The open letter condemned “any attempt to connect white supremacy and fascism to libertarianism.”

Tom Woods, a Mises Institute fellow, co-founder of the neo-Confederate League of the South and board member of the Mises Caucus, rejected the letter, denying there was a growing bigotry problem within the LP. This prompted an online debate between himself and Sarwark.

In an April 10 post, Fakertarians accused Woods of grooming his ex-wife when he was 26 and she was 15. Woods has denied this.

Smith, who openly admires Woods, debated Sarwark on the blood and soil question in 2019. In a YouTube video titled “Who’s allowed in?”, Smith proposed a bigger tent for the LP by asking Sarwark if he does not “want to bring [racists] into a philosophy that believes in peace?”

Sarwark said no, not until they disavowed their racism.

Sarwark told Hatewatch the MC wants “to change fundamental aspects that are definitional to Libertarian philosophy, to suit their preferences.”

In Pennsylvania, Heise’s state, libertarians broke from the LP and formed the Keystone Party, which launched on April 4.

Sasha Cohen, a Libertarian voters elected as city clerk in DeKalb, Illinois, resigned over what he saw as clear MC bigotry in July 2021, after the New Hampshire controversy.

Cohen told Hatewatch he wanted the LNC to “do the right thing” and disassociate from the MC-controlled party.

Cohen said using a “big tent” approach to expanding LP membership is "great in theory,” but the MC strategy closes the party to too many people.