Right-wing influencers, including the pseudonymous, viral Twitter account “Libs of TikTok,” repeatedly drew negative attention to the Pride event in Coeur d’Alene, Idaho, in its runup, setting the stage for white supremacists to target it. 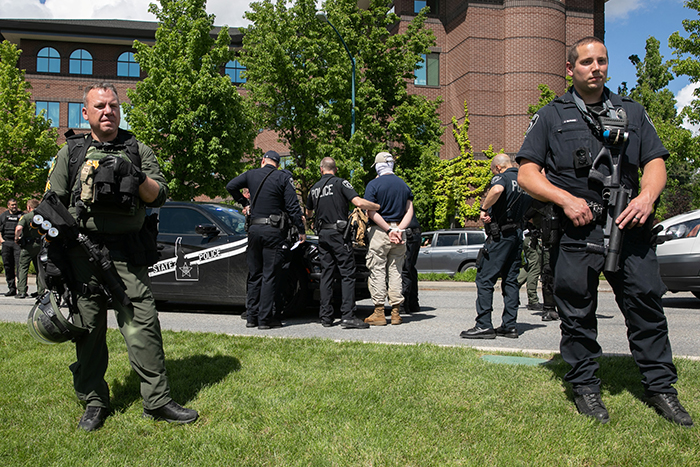 A police officer holds one of the 31 men affiliated with the white nationalist group Patriot Front who were arrested for conspiracy to riot after they were found in the rear of a U-Haul van in the vicinity of a North Idaho Pride Alliance LGBTQ+ event in Coeur d'Alene, Idaho, on June 11. (Photo by Reuters/John Rudoff)

Police arrested 31 members of the white nationalist hate group Patriot Front before they had a chance to descend on the crowd on Saturday, June 11, and charged them with conspiracy to riot, which is a misdemeanor. Had police not apprehended the Patriot Front members, the situation could have proven volatile. Before their arrival, people photographed other likely extremists who appeared to walk among the otherwise pro-LGBTQ crowd.

The conflict created by Patriot Front and other anti-LGBTQ agitators highlights the correlation between social media performers flagging targets to their right-wing audiences and the subsequent mobilization of extremists to act in response. An example of this trend is when Twitter influencers, including some high-profile hate figures, hyped election-related disinformation in the runup to the attack on the U.S. Capitol on Jan. 6, 2021, setting the stage for what became an insurrection attempt.

What happened in Coeur d’Alene, a city in northwest Idaho of roughly 50,000 people, functioned in a similar way, even if the players and setting are different. Out-of-state members of the white supremacist group Patriot Front and other extreme far-right figures could have chosen many different targets during Pride month. They homed in on an obscure event highlighted by Libs of TikTok.

Libs of TikTok and a white supremacist hype Idaho event

Libs of TikTok, which The Washington Post reported in April is run by a Brooklyn-based woman named Chaya Raichik, boasts over 1 million followers on Twitter, where the account frequently mocks LGBTQ people. As Libs of TikTok, Raichik posted about the Coeur d’Alene event to her Twitter followers on June 7.

“‘Family friendly drag dance party’ being promoted by the Satanic Temple in Idaho. We are living in hell,” Libs of TikTok wrote, referring to a now-deleted tweet by someone claiming to represent local satanists.

As Libs of TikTok, Raichik, who has no connections to northwest Idaho that Hatewatch could immediately identify, ignored mundane details about the event in the post: Hosts co-sponsoring the event included a local chapter of the American Civil Liberties Union (ACLU), the Museum of Northern Idaho, and a restaurant called Taco Works, according to flyers advertising it. (Far-right propaganda commonly zeroes in on specific, sensational aspects of LGBTQ culture, frequently misrepresenting it while clipping out important context.) Twitter users subsequently boosted Libs of TikTok’s thread about the event thousands of times.

It is unclear to Hatewatch how Raichik became aware of the Pride event in Coeur d’Alene, but Dave Reilly, a white supremacist who attended the deadly “Unite the Right” rally in Charlottesville, Virginia, in August 2017, and once organized with the hate group Identity Evropa, actively sought her help in drawing attention to it. 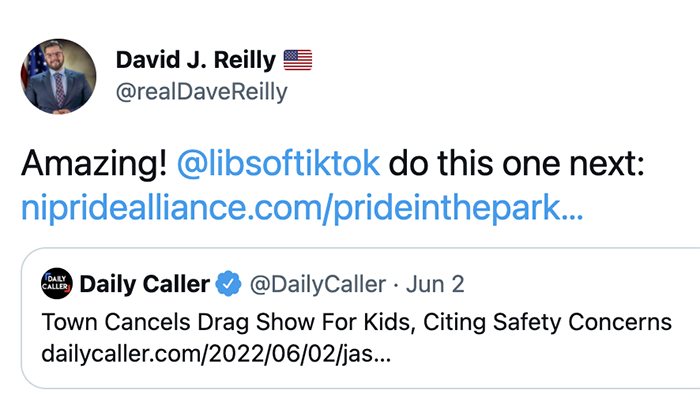 “Amazing! @libsoftiktok do this one next,” the Idaho-based Reilly tweeted five days earlier on June 2, tying the then-upcoming Coeur d’Alene Pride celebration to an article in the Daily Caller about a different, North Carolina-based Pride event that folded after facing pressure from Libs of TikTok.

“Idaho Tribune” also drew attention to it. Idaho Tribune, far from a real newspaper, is an obscure junk news publication that on multiple occasions has promoted Reilly’s political activism. Antiracist activists also tipped Hatewatch off to infrastructural overlap between a website that promotes Reilly by name and Idaho Tribune. Hatewatch reviewed source code for David Reilly’s website and the Idaho Tribune site and confirmed that the two sites share graphics from the same web-hosting account, meaning they are likely controlled by the same person. 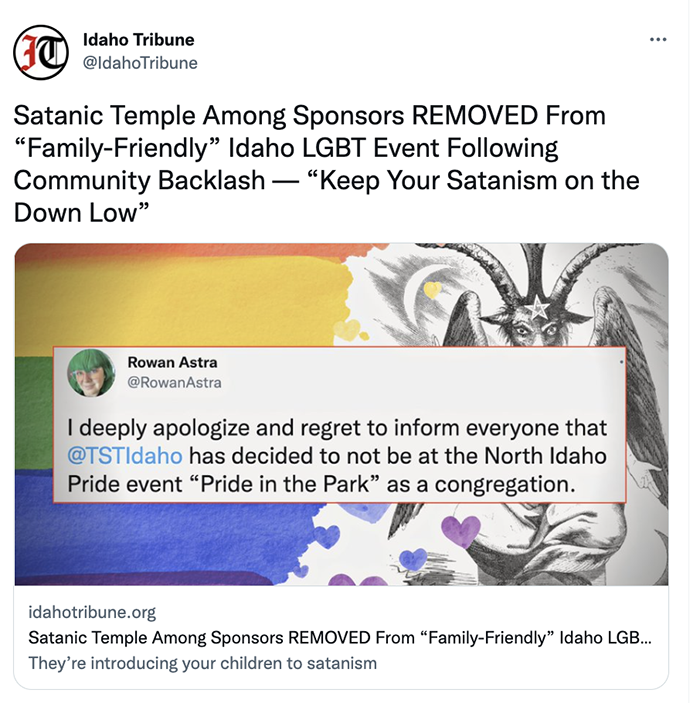 The Idaho Tribune, a junk-news publication, connected the Coeur d'Alene Pride rally to satanists in this tweet.

Idaho Tribune published a post on June 6 highlighting the event and connecting it to satanists. White nationalists and neo-Nazis, including Reilly and another local white supremacist named Vincent James who agitated against the Coeur d’Alene event, have shared Idaho Tribune content to the messaging app Telegram since it first became active in October 2021, Hatewatch found in a review of that platform. One day after the Idaho Tribune post, Raichik started to post to Twitter about the Coeur d’Alene Pride event.

Hatewatch reached out by email to Raichik and asked how she became aware of the Coeur d’Alene event, but she did not immediately respond. Regardless of whether Raichik knew of white supremacist interest in the event or discovered the Pride event elsewhere, Reilly’s efforts to woo Libs of TikTok help show how extremists seek to exploit loosely moderated social-media influencer culture to create chaos and disruption. As Libs of TikTok, Raichik also shared with her followers screenshots taken from the Idaho Tribune on June 9, demonstrating that she at minimum had familiarity with the content from that white supremacist-linked website.

Paul Joseph Watson, a U.K.-based influencer with over 1 million Twitter followers and nearly 2 million subscribers on YouTube, also singled out Coeur d’Alene Pride to his followers on June 7, repeating the alleged “satanist” involvement on his junk blog Summit News. Like Raichik, Watson had no discernible connection to the Idaho-based event when he directed his followers to it. A former employee of the antigovernment conspiracy website Infowars, Watson privately expressed contempt for non-white people and said he wished he could “press the button to wipe Jews off the face of the Earth,” according to a leaked audio recording Hatewatch reported on in May. 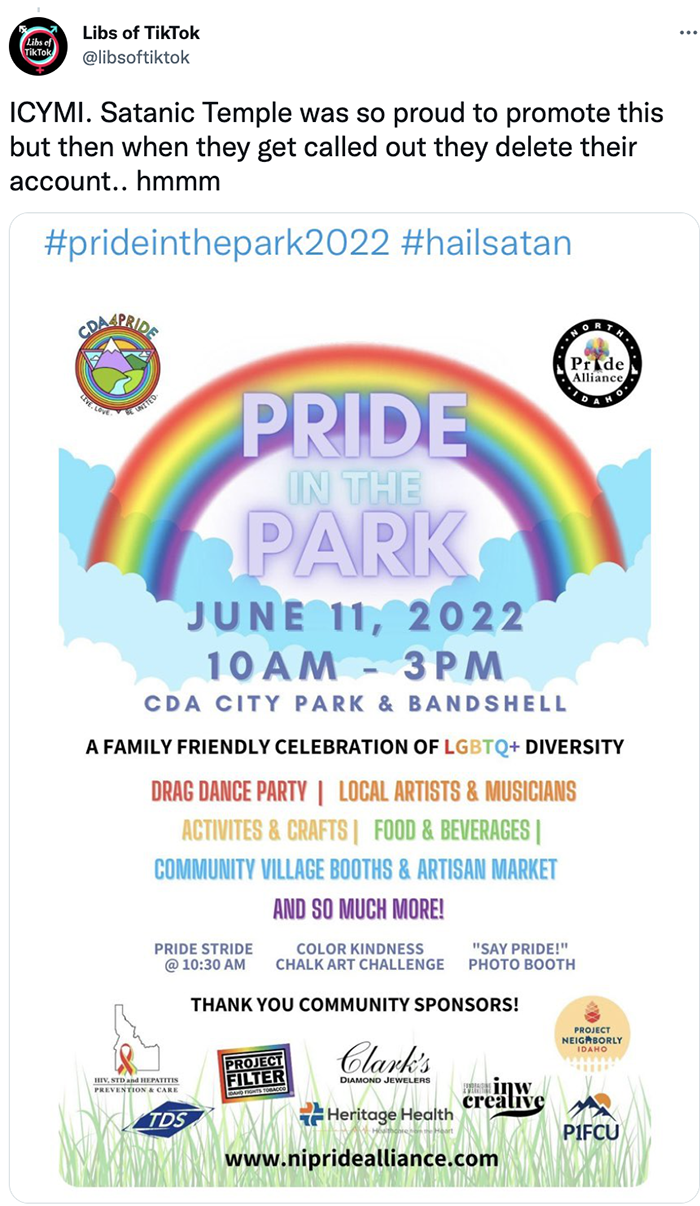 Libs of TikTok referred to the Satanic Temple's promotion of the Coeur d'Alene Pride rally in this tweet.

The allegations right-wing influencers made online connecting this event to Satanism hearken back to a moral panic perennially exploited by the religious right. In reality, Satanism is not a widespread religious or cultural movement in the U.S. Even so, the specter of modern Satanism has motivated hysteria in the U.S. for decades, most notably in the “Satanic Panic” of the 1980s and ‘90s. Recently, unfounded accusations of Satanic ritual abuse have also informed conspiracies like #Pizzagate and QAnon.

Beyond what happened in Coeur d’Alene, social media influencers such as Watson and Raichik’s Libs of TikTok have used their platforms to agitate against LGBTQ culture aggressively this spring. Turning Point USA (TPUSA) contributor Jack Posobiec, an extremist who collaborates with hate groups and traffics in disinformation, helped make viral the term “groomer,” which seeks to smear LGBTQ people with allegations of pedophilia. On Sunday, June 12, Drew Hernandez, another influencer connected to the youth-focused right-wing group TPUSA, posted several short videos to Twitter from a Los Angeles-based Pride event and marked the clips with such descriptions as “CHILD ABUSE,” “GROOMER” and “PEDO ALERT.” YouTuber Tim Pool, Malaysian-based internet personality Ian Miles Cheong and conservative entertainer Matt Walsh, along with many similar figures, have appeared to sharpen their already negative focus on the LGTBQ community in recent weeks as Pride events have kicked off.

The atmosphere these influencers create, enabled by such companies as Twitter, make the likelihood of white supremacists and other extremists showing up at LGBTQ-themed events stronger. Members of the neofascist Proud Boys allegedly disrupted a drag queen storytelling event at the San Lorenzo Library in Alameda County, California on Sunday, June 12. Acting as Libs of TikTok, Raichik had again previously highlighted the event to her followers, this time in a tweet posted on May 30.

“[The event is] specifically for preschoolers,” she posted two weeks before the alleged Proud Boys incident. “The library is funded primarily by local property taxes.”

Megan Squire and Rachel Janik contributed to the reporting in this analysis.