The House committee investigating the events surrounding the Jan. 6, 2021, insurrection focused Tuesday on the Proud Boys and Oath Keepers, two extremist groups involved in the attempt to stop the certification of President Joe Biden’s electoral victory. 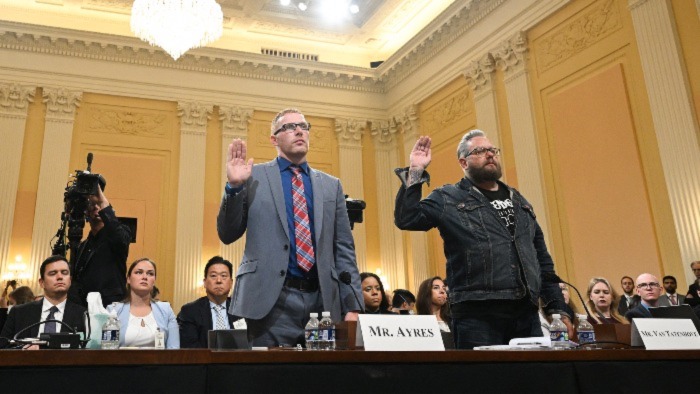 Jason Van Tatenhove (R) and Stephen Ayres (L) are sworn in on Capitol Hill on July 12 in Washington, D.C. (Photo by Saul Loeb/AFP via Getty Images)

The committee detailed connections between the Oath Keepers and former President Donald Trump’s inner circle, including longtime Republican strategist Roger Stone. In his opening remarks, Rep. Jamie Raskin said, “Members of domestic violent extremist groups created an alliance, both online and in person, to coordinate a massive effort to storm, invade and occupy the Capitol” in the service of Trump.

Oath Keepers was founded in 2009 by Rhodes, who recruited among veterans, first responders and law enforcement. The group had a massive following, with members and chapters across the country.

More than 20 Oath Keepers members are facing charges stemming from the Jan. 6 insurrection, including seditious conspiracy. 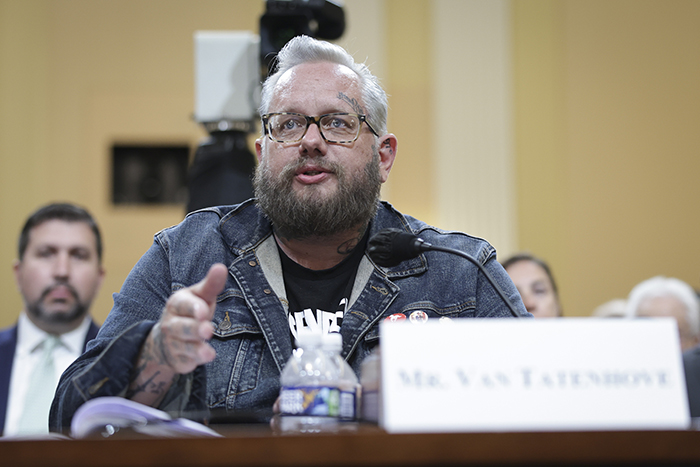 Jason Van Tatenhove, who served as national spokesman for the Oath Keepers and as a close aide to Oath Keepers founder Stewart Rhodes, testifies during the seventh hearing by the House Select Committee to Investigate the January 6th Attack on the U.S. Capitol in the Cannon House Office Building on July 12 in Washington, D.C. (Photo by Kevin Dietsch/Getty Images)

The committee called former Oath Keeper spokesperson Jason Van Tatenhove, who detailed in testimony to the committee his fears of armed revolution and increasing radicalization inside the extremist group.

Raskin asked Van Tatenhove about Oath Keepers leader Stewart Rhodes’ take on the prospect of Trump calling on the Insurrection Act, a law from 1807 that gives the president the authority to call on militias to defend the U.S.

Van Tatenhove replied: “That was a path forward to move forward with [Rhodes’] goals and agendas. I think we need to quit mincing words and just talk about truths, and what it was going to be was an armed revolution.” Van Tatenhove, who worked for the Oath Keepers in 2015 and 2016, called attention to the arms and explosives the antigovernment group allegedly brought to Virginia, near Washington, D.C., ahead of the Jan. 6 riot. He also referenced the gallows rioters built outside the U.S. Capitol, which was allegedly meant for former Vice President Mike Pence. Rhodes had long held desires of targeting politicians, Van Tatenhove claimed. The former spokesperson said that one of his first assignments Rhodes gave him as an employee was to create a deck of cards with a politician on each card.

The deck of cards would have mimicked a similar set the U.S. military based on Iraqi government officials at the onset of the U.S. war on Iraq in 2003. The goal was to familiarize soldiers with high-level targets.

The alleged deck of cards is in line with Oath Keepers’ tactic of appealing to former military members. The military itself has struggled to deal with extremism in its ranks in recent years.

He said Rhodes was always looking for legitimacy trying to claim the militia group was instead simply a veterans’ support group.

Van Tatenhove said he left the group when they became so extreme that members openly discussed denying the Holocaust in a grocery store.

Raskin asked Van Tatenhove about his concerns regarding future violence from the Oath Keepers.

Given the Oath Keepers’ extensive training and events such as the 2014 Bundy Ranch standoff, where antigovernment extremists confronted federal law enforcement over rancher Cliven Bundy’s grazing fees, Van Tatenhove said there was potential for worse political violence in the coming years.

“I do fear for this next election cycle because who knows what that might bring if, if a President is willing to try to … encourage … a civil war amongst his followers.”

Editor’s Note: Rachel Carroll Rivas contributed to the reporting of this article.