“We want to cross the Rubicon. We want total war. We must be prepared to do battle in every arena. In the media. In the courtroom. At the ballot box. And in the streets,” NYYRC president Gavin Wax declared to a room full of supporters at 583 Park Ave., an event venue on New York’s Upper East Side.

“This is the only language the left understands. The language of pure and unadulterated power,” Wax added. 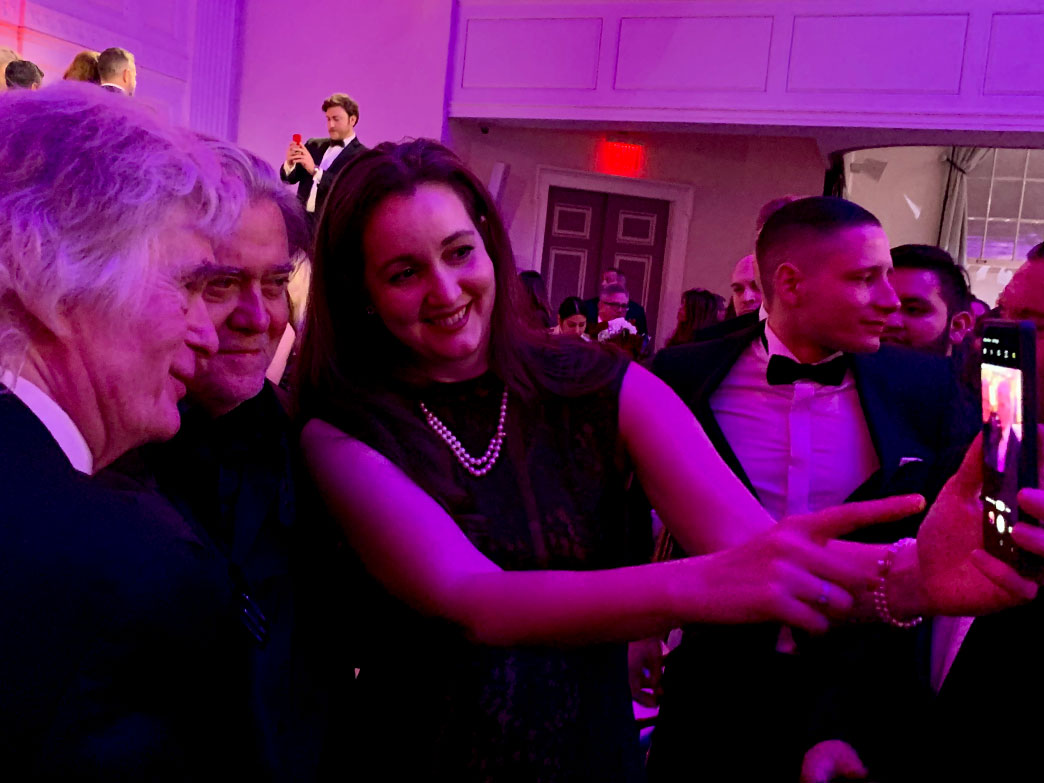 The white nationalists of VDARE snap a selfie with Steve Bannon at the NYYRC gala on Dec. 10. From left to right: Peter Brimelow, Steve Bannon, Lydia Brimelow. (Photo by Michael Edison Hayden)

Republicans publicly lauded members in attendance from an Austrian political party founded by World War II-era Nazi party members. Racist political operative Jack Posobiec shared jokes across a table with Josh Hammer, the opinion editor of Newsweek. Multiple recently elected GOP congresspeople applauded Marjorie Taylor Greene, who told the NYYRC crowd in the event’s closing remarks that the Jan. 6, 2021, attack on the U.S. Capitol would have succeeded if she had planned it and that the insurrectionists would have been armed. 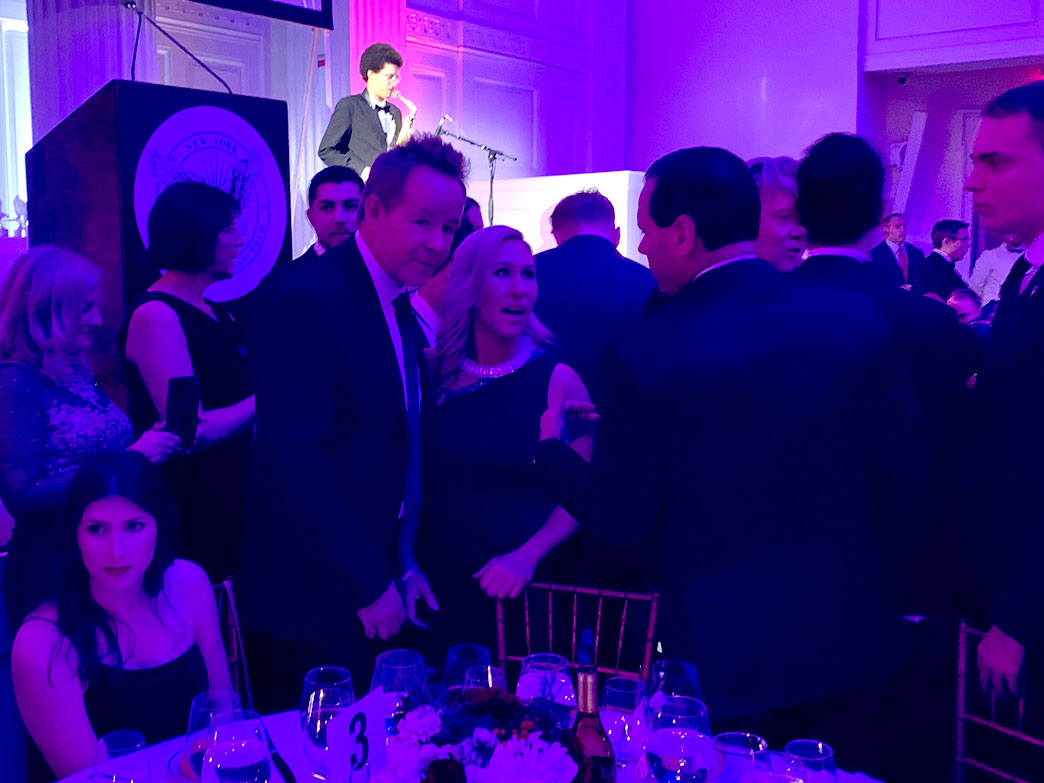 Rep. Marjorie Taylor Greene talks with guests at the NYYRC gala on Dec. 10, 2022 in Manhattan. (Photo by Michael Edison Hayden)

“Then Jan. 6 happened. And next thing you know, I organized the whole thing, along with Steve Bannon,” Greene said, referring to allegations that she had led reconnaissance tours of the Capitol for soon-to-be insurrectionists in the days prior to the violence.

“I will tell you something, if Steve Bannon and I organized that, we would have won,” she said, as attendees erupted in cheers and applause. “Not to mention, it would’ve been armed.”

White nationalists and neofascists in the Republican Party

Republican speakers repeatedly voiced an anti-democracy, authoritarian ideology, and extremists in the audience cheered wildly. White nationalists such as the Brimelows of VDARE and leaders from extreme far-right European parties like Alternative for Germany (Alternative für Deutschland, AfD), whom German officials placed under surveillance for their ties to extremism, and Austrian Freedom Party (Freiheitliche Partei Österreichs, FPÖ), ate and drank in the same room as newly elected Republican congresspeople, such as Long Island and Queens-based George Santos, Georgia-based Mike Collins and Florida-based Cory Mills.

A Steve Bannon selfie for VDARE

Bannon, the former Trump adviser, physically embraced the white nationalist Brimelows at NYYRC, spoke to the couple for several minutes and took a selfie with them. VDARE traffics in the great replacement conspiracy theory and has published defenses of writing a terrorist who gunned down 24 people in an El Paso Wal-Mart in 2019 allegedly authored. Peter Brimelow attended the white supremacist American Renaissance conference in November, whose host has portrayed Black people as being subhuman. The Brimelows publish writing authored by Jason Kessler, who helped organize the deadly 2017 “Unite the Right” rally in Charlottesville, Virginia.

When Hatewatch attempted to speak to Lydia Brimelow after her conversation with Bannon to inquire about it, she walked away. Hatewatch did not get close enough to Bannon to ask him about the encounter with Peter and Lydia Brimelow. 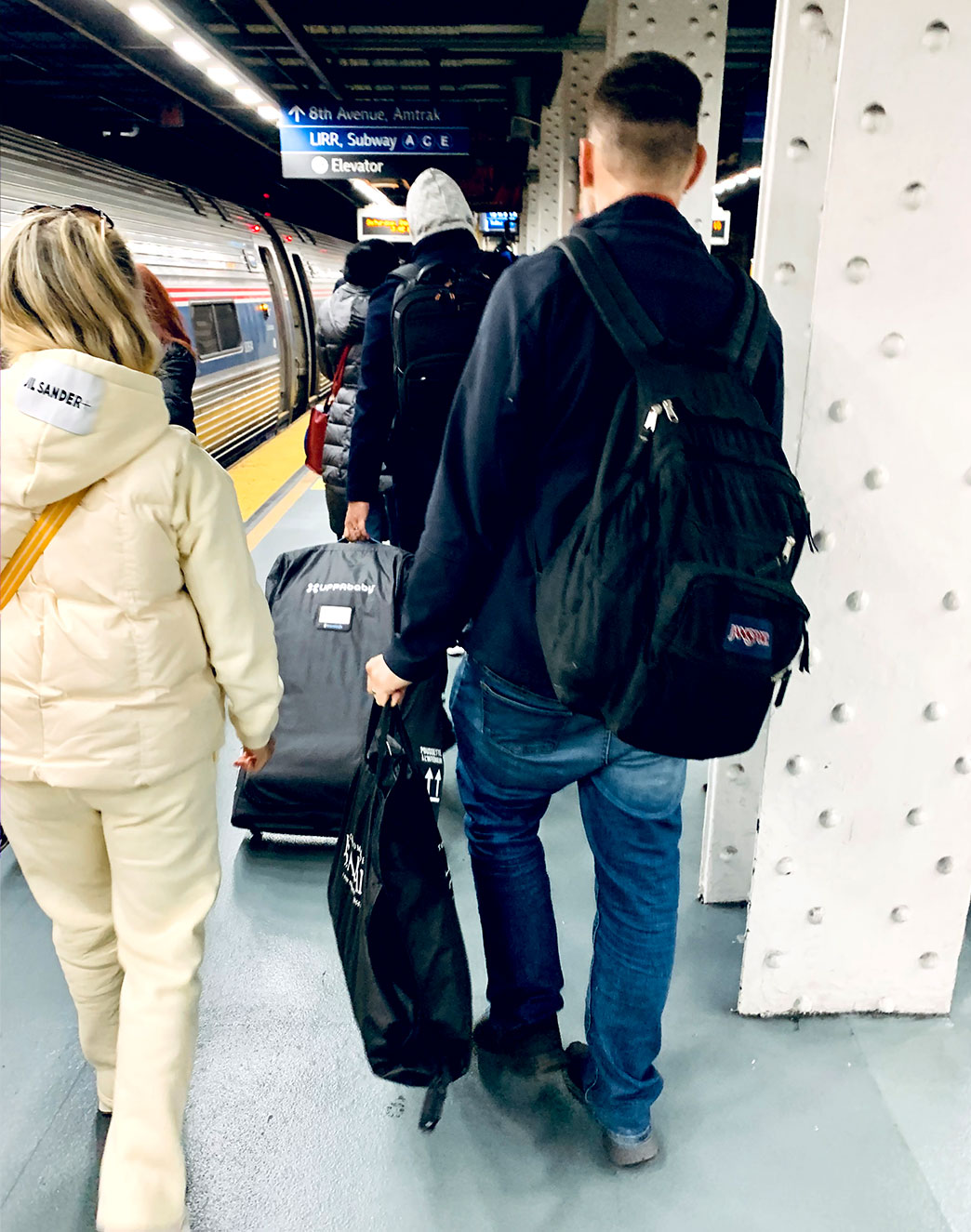 Jack and Tanya Posobiec arrive in New York City by train before the NYYRC meeting in Midtown on Dec. 10. (Photo by Michael Edison Hayden)

Posobiec, a radical right political operative, resides with his wife Tanya Posobiec in Hanover, Maryland. The couple took Amtrak Northeast Regional train 88 into New York’s Penn Station Moynihan Hall on Saturday afternoon to get to the NYYRC gala. Train 88 pulled in at around 3:45 p.m., and a Hatewatch reporter observed Posobiec and his wife deboard and enter New York City.

“Antifa, don’t even think about it tonight,” Posobiec posted to Twitter three hours later, at 6:39 p.m., with the location of the tweet marked Manhattan, New York.

NYYRC gave Posobiec a speaking slot and an Allen W. Dulles award, named after the former head of the CIA. NYYRC said in its December bulletin that the award is given to “an individual who embodies the virulent anti-Marxist spirit of [Dulles].”

Like the Brimelows, Posobiec has a well-documented history of radical-right activism. He has boasted of his ties to the antigovernment Oath Keepers, fraternized with the Proud Boys, and at least twice, filmed propaganda videos with a pair of neo-Nazi brothers. He is primarily known for pushing the #Pizzagate disinformation campaign, which falsely suggested that Democrats ran a pedophile dungeon in the basement of a Washington, D.C., pizzeria.

Hatewatch spoke with Posobiec around midnight at the NYYRC event and asked him about his involvement in pushing the #StoptheSteal hashtag onto Twitter during the runup to the 2020 election. Although “Stop the Steal” became synonymous with the Jan. 6, 2021, attack on the U.S. Capitol building, Posobiec started tweeting the hashtag from his over-1-million-follower account as early as Sept. 7, 2020, two full months before anyone tallied any votes.

While responding to Hatewatch at NYYRC, Posobiec first attempted to associate the hashtag with Roger Stone and then with Ali Alexander, two of his collaborators. Then he called it “a meme.” He never explained why he abruptly started posting the hashtag in September 2020.

While answering questions, Posobiec grew testy with a Hatewatch reporter and described SPLC as a “domestic terror organization.” Posobiec called that reporter a “scumbag” and a “troll.” After Posobiec’s speaking tone became palpably agitated, a crowd formed and NYYRC executive secretary Viswanag “Vish” Burra escorted both Hatewatch reporters to the exit, physically shoving one of them. 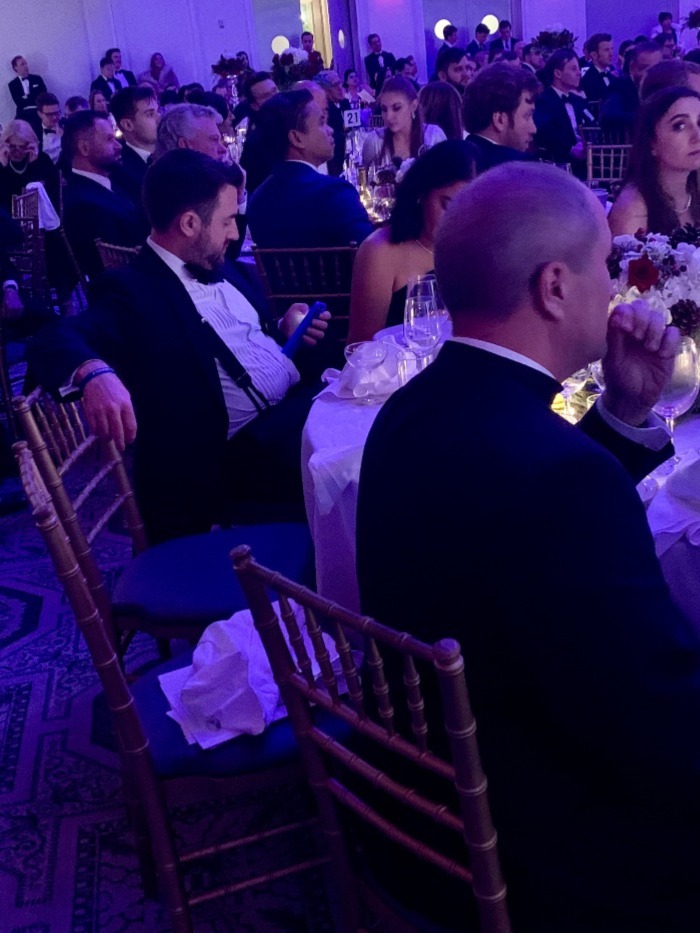 Newsweek editor Josh Hammer (in suspenders) texts from table #6, near the front of the stage, at the NYYRC gala on Dec. 10. (Photo by Michael Edison Hayden)

Starting in May 2020, after editor Nancy Cooper and chief content officer Dayan Candappa brought political activist Josh Hammer to run Newsweek’s opinion section, the 90-year-old publication has emerged as a hub for opinion pieces authored by radical right activists. Newsweek has published the extremist Posobiec as well as 2020 election-lie pusher Raheem Kassam in recent years, and Hammer has also hosted both of them on his Newsweek-branded podcast. The three men sat together talking and laughing at table #6 during the NYYRC event, near the stage. 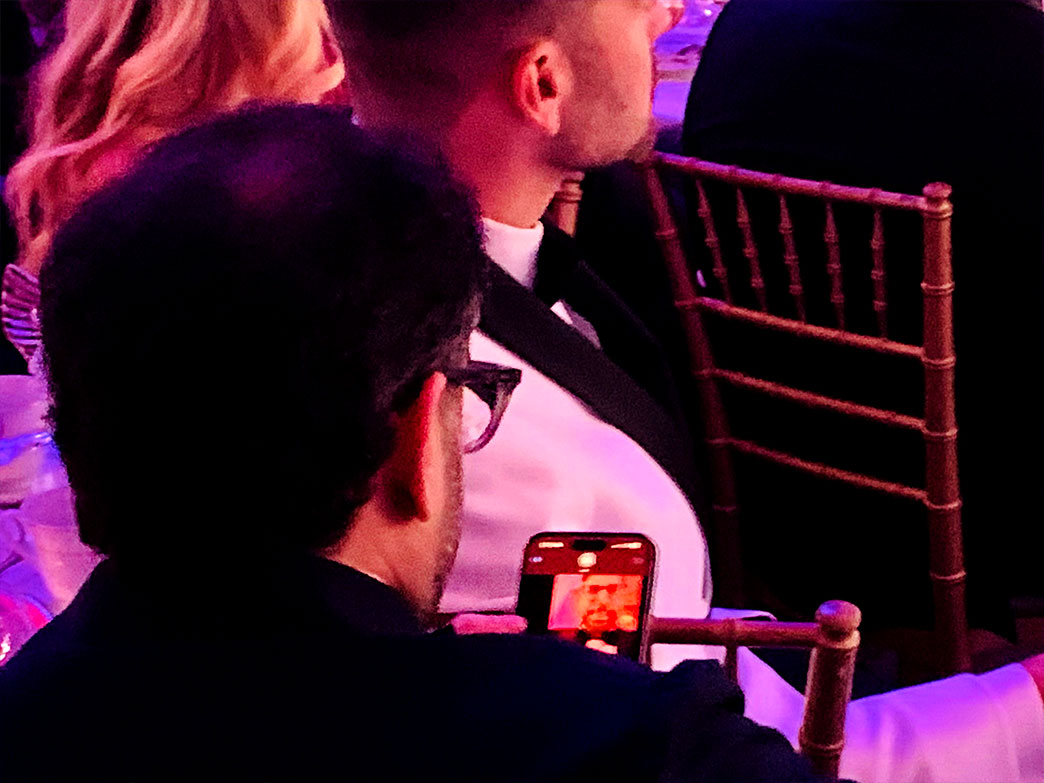 When QAnon influencer-turned-congressperson Marjorie Taylor Greene took the stage, Hammer stood up and applauded. When she endorsed former President Trump as her 2024 presidential candidate of choice, Posobiec turned to Hammer and grinned. In January, Florida Gov. Ron DeSantis invited Hammer on a tour of his office, and the Florida-based Newsweek editor has since hyped DeSantis as a potential presidential candidate.

“You gonna go up there, Josh?” Posobiec chided Hammer about Greene’s endorsement of Trump, eliciting laughter from the table.

A Hatewatch reporter approached Hammer after Greene’s speech, made an introduction and asked if he knew Peter Brimelow of VDARE.

“I didn’t even know he was here!” Hammer said of the infamous white nationalist publisher. “I’m going to say ‘Hi.’ ”

The Hatewatch reporter asked Hammer how he got his job at Newsweek, and the opinion editor abruptly stopped talking. He asked the reporter to identify himself again. When the reporter did, Hammer’s expression slackened. He quickly claimed he did not know Peter Brimelow and left.

Legal trouble has entangled Project Veritas in recent months. Former associates sued Project Veritas in August, citing the creation of a “highly sexualized” work environment, which they claim included substance abuse and unpaid labor. (The group has denied these allegations.) In September, a jury in a civil case found that Project Veritas had “violated wiretapping laws and fraudulently misrepresented itself” during a sting operation targeting a group called Democracy Partners. The FBI raided O’Keefe’s home in November 2021 as part of an investigation into the alleged theft of a diary belonging to President Joe Biden’s daughter Ashley. (The group has claimed that they acted lawfully in obtaining the diary.)

Outside of the building on 583 Park Ave., O’Keefe argued with antifascist protesters, according to footage reviewed by Hatewatch. A different, self-described “independent video journalist” posted a series of clips to Twitter at 8:15 p.m., showing O’Keefe asking antifascist protesters on the corner of Park Avenue and 62nd Street, “What’s racist about Project Veritas?”

The same social media user posted a video to Twitter at 9:12 p.m. In it, O’Keefe could be seen standing on the street outside the venue alongside several other men, including Newsweek’s Hammer.

“Would you like to make a tax-deductible donation to Project Veritas?” O’Keefe asked the protesters. 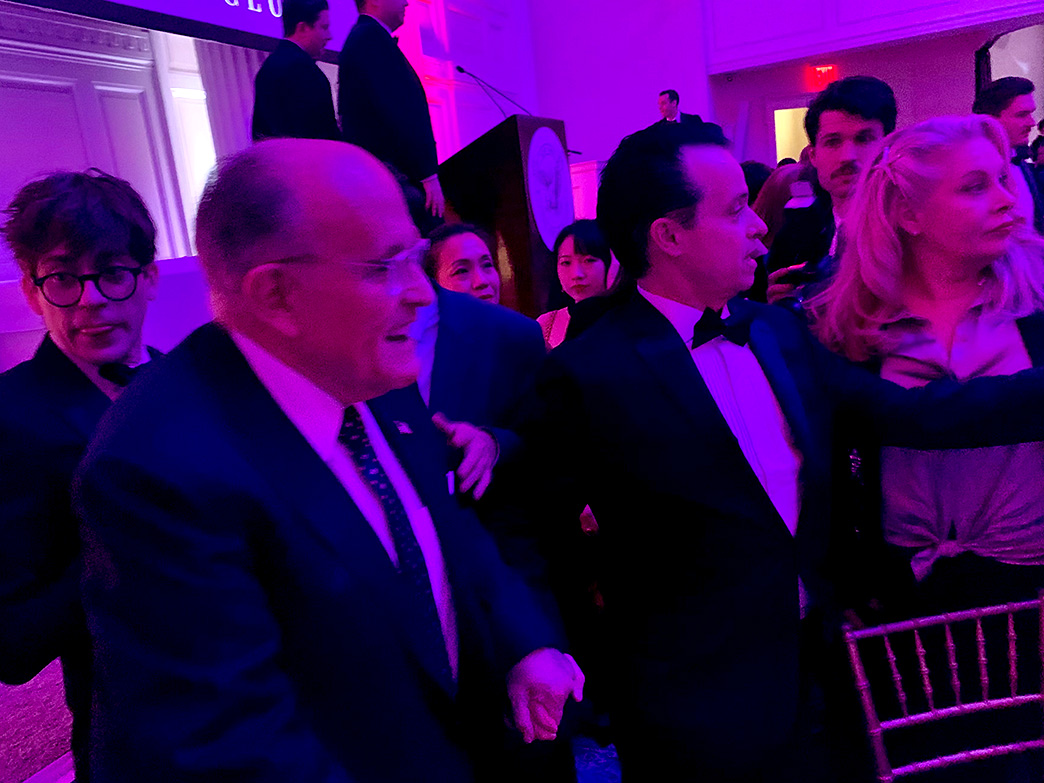 Hatewatch observed Project Veritas’s Tyrmand sitting at table #4, the one closest to the center of the stage, alongside Trump-world power players Steve Bannon and former New York City mayor Rudy Giuliani. A recent New York Times report named Tyrmand and Bannon as key U.S. figures in an effort to depict Brazil’s November presidential elections as being fraudulent, after voters in that country pushed hard-right favorite Jair Bolsonaro out of office. Tyrmand, who is known for his ties to the global radical right, took the stage and lauded the ultranationalist European leaders in attendance.

“This is an all-star room, and I urge all of you to meet everybody here and continue to spend time together, getting to know each other, so we can fight the battle, arm in arm,” Tyrmand said of the European extremists, including the contingents from Austria and Germany. 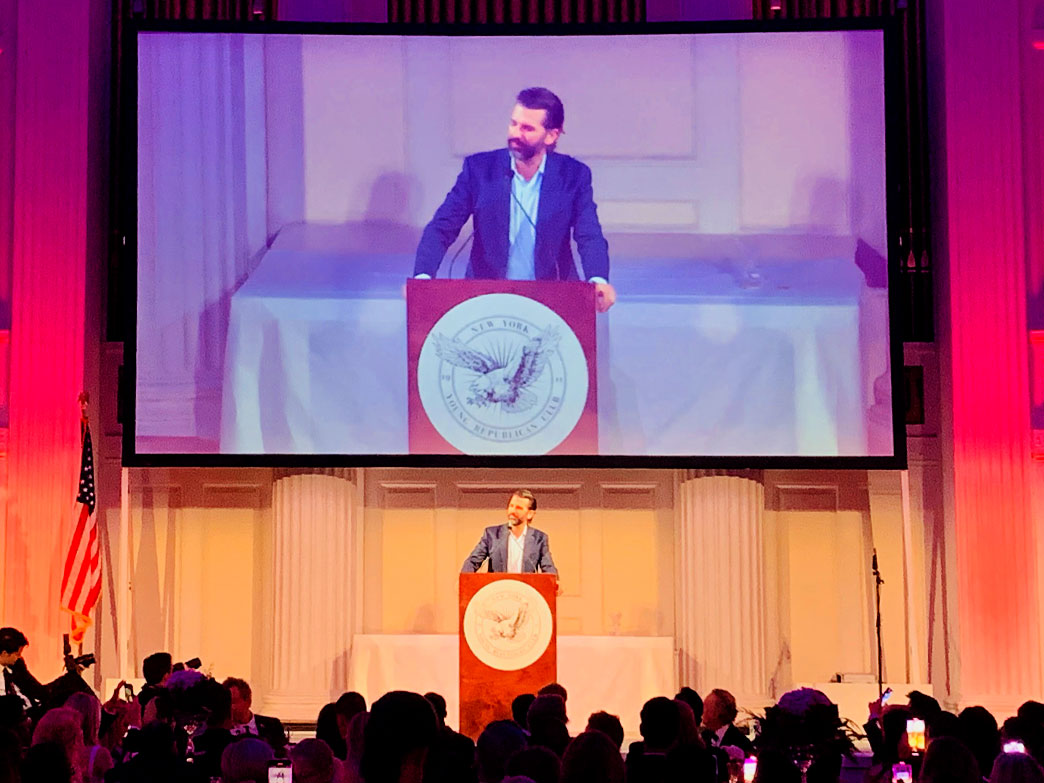 Speakers including Trump Jr. and Greene sought to downplay the Republicans’ failure to secure a so-called “red wave” victory in the 2022 midterms by attacking such familiar right-wing targets as Joe Biden’s son Hunter Biden and LGBTQ+ people.

“The party is in a pretty good spot, but America may not be getting it. We have a party right now that is actually delivering for the American people. But what we don’t have [is] our same people in Washington, who can make those things happen,” Donald Trump Jr. told the crowd after he came on stage.

Greene suggested eliminating Democrat members of House committees in her closing speech, as a way of shifting the tide of power in Washington. She also told the audience it was “almost midnight,” meaning they risked losing their country to perceived enemies.

Greene expressed her gratitude to Project Veritas for their work.

“Thank you very much. We appreciate that,” she said to scattered applause.

Editor's note: This article was updated after publication to correct the address of the venue for the NYYRC gala. The event was held at 583 Park Ave.