Far-right propagandist Vincent James Foxx echoed “Great Replacement” conspiracy theories in a speech to a gathering of North Idaho Republicans just over a week ago, alleging that unspecified conspirators had “intentionally and deliberately and consistently changed the demographics of this country ... because they know that certain groups vote a certain way, and they know they can use that, that’s a benefit to them.” 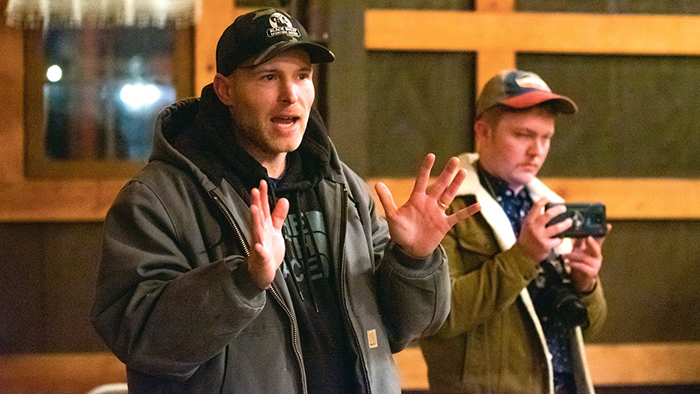 Vincent James Foxx, of Idaho, asks questions at a March 9, 2022, Joe Kent town hall in Onalaska, Washington, as someone accompanying him, who refused to reveal his name, records the event for a YouTube channel. James told Centralia, Washington, newspaper The Chronicle that he drove five hours to attend the town hall. (Photo by Jared Wenzelburger/The Chronicle)

Foxx, who was present at the Jan. 6, 2021, pro-Trump rally at the U.S. Capitol and relocated to Post Falls, Idaho, that same year, also told the North Idaho Pachyderms Club meeting this Jan. 6 that federal agencies had engineered the subsequent riot and invasion of the Capitol building and that conspirators – again unidentified – were seeking to manipulate children into same-sex attraction for political ends.

At the Pachyderms meeting, Foxx was coy in identifying those he believed to be behind these conspiracies, but Hatewatch‘s examination of Foxx‘s recent online output shows that he has previously attributed all of the same conspiracies to Jewish people in posts that defend Nazi book-burning, praise antisemitic rapper Ye and white nationalist Nick Fuentes for confronting “global Jewish power,” and assert that Jews control the media.

Foxx’s speech to the GOP-aligned club is the most recent indication that extremists are welcome in Republican circles in North Idaho.

Although the North Idaho Pachyderms Club did not publicly advertise Foxx’s speech – leaving the name of their Jan. 6 speaker blank in their online calendar – Foxx himself uploaded a video recording of the talk to his website and a range of “alt-tech” platforms that he uses to spread propaganda.

Additionally, archived versions and screenshots of posts that Hatewatch reviewed indicate that the Pachyderms did advertise the event on their Telegram channel in the days leading up to the speech. From there, it was reposted in a right-wing Telegram group of 654 members dedicated to discussion of political issues in Kootenai County.

The advertisement was apparently later deleted from the North Idaho Pachyderms Telegram channel, but it indicated that the event at which Foxx spoke was held at JB’s Restaurant in Coeur D'Alene at 7:30 a.m. on Jan. 6.

The next day, Foxx posted video of his speech across all the platforms he uses.

The North Idaho Pachyderms have no official website, their Telegram channel does not offer messaging, and no public listing contains either contact details for the group or the names of any officers. Hatewatch attempted to call and text message a number provided for a man identified as a coordinator of the group in a local newspaper in 2019, but received no response.

Although the topic announced at the start was “culture wars,” Foxx dwelled on the Jan. 6, 2021, riots and their basis in the false belief that Donald Trump had in fact won the 2020 election.

“I think all of us in this room know what really happened on Jan. 6,” he told the audience. “It went exactly the way the FBI wanted it to go.”

At one point near the beginning of the talk, Foxx asserted, “You know what? The election was stolen.”

Later in the talk, however, Foxx outlined a more expansive conspiracy theory about a plot to “replace” white Americans. He claimed the plot utilized social media platforms, immigration policy and LGBTQ-inclusive education programs.

On social media platforms, Foxx claimed that “voters are not informed, they are programmed,” and falsely asserted that “all of these (social media) companies were started by the CIA.”

Perhaps surprisingly, Foxx included Palantir – founded and led by far-right billionaire Peter Thiel – among the companies who were complicit in the effort to surveil and brainwash Americans.

Foxx pointed to the increasingly progressive political inclinations of the so-called Millennial and Generation Z cohorts to “culture war. These people have control over the information ... they have taken over the minds of the younger generation.”

”If they take the minds of the youngest generations, they’ve won everything forever,” he added.

Foxx has previously identified Jewish people as the architects of media manipulation in the U.S.

In an October 2022 post titled “Is Kanye Right About the Jewish Entertainment Racket?” Foxx published a gallery of entertainment industry figures who are Jewish, asking in the accompanying text, “What are the effects of the elites existing as an ethnic clique who do not wish for the best of the nation’s people but themselves?” and answering, “It means to live as a slave.”

This was just one of dozens of explicitly antisemitic posts that he has added to his website The Daily Veracity.

After making claims about his daughter’s experiences in a local middle school with LGBTQ-inclusive school policies and curriculums, he told the audience that “they‘re recruiting young people,” and then connected this with the “Great Replacement” narrative with the warning that “if they can’t replace you demographically quick enough, they’re just going to turn your kids gay.”

Soon after the book’s publication in 2020, a review by Psychology Today described Shrier’s book as “bizarre and full of misinformation.”

Foxx attributed increased support for same-sex marriage – including among Republicans – as evidence for the proposition that “no one is immune from the media's control over your mind.”

He singled out the sitcom “Will and Grace” as an example of how “the media made us this way” and compared the U.S. unfavorably with Russia, where he claimed that “70% of the population disagrees with homosexual marriage and all this gender stuff.”

Previously on his website, Foxx addressed what he described as the “‘Will and Grace’ effect” in an article titled “Yes, Jews Do Run Hollywood and the Media. Here’s Why it Really Matters,” in which he asserted that “Jews control the mainstream media” and “the Federal Reserve is largely controlled by a small cadre of powerful Jews.”

In the Friday speech, Foxx continued: “The only answer to this is to return to the regulation of morality. Liberals call this fascism, neo-Nazism. No this is what we were doing 20 years ago.”

Previously, Foxx had called for a “regulation of morality” in website posts that variously attacked LGBTQ-inclusive programs at a local school, argued that LGBTQ cartoon characters offered a reason to overturn same-sex marriage and to ban Drag Time Story Hour, and that supporters of same-sex marriage should be excluded from Republican politics.

“You can’t play by the rules of the media. We shouldn’t be afraid of the New York Times.”

Hatewatch contacted Foxx for comment via an email address listed on his website. Asked about his speech and his history of antisemitic and anti-LGBTQ conspiracy theories, Foxx did not directly respond, instead asking “why the SPLC completely dissolved its black nationalist section even though according to the SPLC’s own data (attached) per capita they are the biggest ‘hate group’ in America and commit the highest rate of attacks?”

Asked about Foxx’s claims, Susan Corke, director of the SPLC’s Intelligence Project, which publishes Hatewatch, wrote in a message that “SPLC continues to list groups based on meeting our hate group designation and continually updates our terminology and categories to be as accurate as possible.”

“The groups Foxx mentions continue to be listed as hate groups and antisemitic groups, as it applies to the activity they are involved in in 2022,” Corke added.

Foxx has a long history as a prominent proponent of hateful conspiracy theories, and as a promoter of violent far-right groups.

In 2017, ProPublica reported that Foxx was acting as an “unofficial propagandist” for white nationalist street-fighting group the Rise Above Movement (RAM), whose members were mostly based in Southern California, as was Foxx before he relocated from Lake Forest in Orange County to Post Falls, Idaho, in late 2021.

Archives of Foxx’s now-defunct Red Elephants website from the same year show him cheering on RAM and others who violently confronted antifascists and other protesters in Berkeley, California, and beyond.

Following their participation in violent riots in California, RAM traveled to Charlottesville, Virginia, in August 2017, and engaged in violent interactions with counterprotesters at the deadly “Unite the Right” rally.

Three members of the group were later convicted of federal riot charges over their actions that day. The group’s founder and leader, Robert Rundo, is still facing federal charges over his participation in violent street fights during 2017 and is due to appear in court in California in April, after years of appeals were exhausted.

Foxx has since claimed that back in 2017, he was fired from a long-term job in advertising over his promotion of white nationalist ideology and associated groups.

At that time, Foxx was mostly prominent for his Red Elephants YouTube channel, which had attracted some 300,000 subscribers, according to social media analytics service SocialBlade.

After being banned from YouTube, Foxx began collecting money from supporters on livestreaming platform DLive. Hatewatch’s review of SPLC records of Foxx’s DLive history indicates that he generated almost $27,000 on the platform prior to his suspension from the platform in January 2021, in the days following the riot at the Capitol.

Foxx was suspended from DLive at the same time that white nationalist livestreamer Nick Fuentes and recently imprisoned Internet personality and Jan. 6 rioter Timothy “Baked Alaska” Gionet were excluded from the platform.

Days before the suspensions, Hatewatch reported that Gionet and Fuentes had used the platform to monetize their participation in the events of Jan. 6.

(Foxx is a close ally of Fuentes, and was a featured speaker at his 2021 AFPAC conference in Florida alongside far-right Rep. Paul Gosar, white nationalist former Rep. Steve King, and anti-immigrant and anti-Muslim propagandist and former newspaper columnist Michelle Malkin.)

Following the DLive ban, Foxx took to extremist-friendly social media platform Gab to complain that he was being “politically persecuted,” adding that “The same political persecution ... [that] led to the 2017 termination of my employment of 13 years ... has left me unemployable, and ... led to my YouTube channel being terminated in August of 2020.”

Foxx added, “I am now definitely going to have to expedite the sale of my home and commence relocation.”

Since his arrival in Post Falls, Foxx has positioned himself as part of a “right-wing takeover happening right now in the state of Idaho,” according to a Huffington Post report last May, which also recorded him as saying, “We have a great large group of people, and that group is growing.”

Foxx was a vocal participant last Dec. 21 at a rowdy meeting of the board of trustees of North Idaho Community College (NIC). The majority bloc on the board – Todd Banducci, Greg McKenzie and Mike Waggoner – were supported by the Brent Regan-led KCRCC, and campaigned on combating “wokeness” at the two-year college.

Their actions since assuming the majority – including abruptly placing the college president on administrative leave and installing a handpicked replacement, hiring a new college attorney without a bid process and violating open-meetings laws – have reportedly endangered the college’s accreditation.

Foxx turned out to support the far-right majority bloc and to confront their critics, boasting on a livestream hosted by far-right YouTuber Casey Whalen that he had concluded an argument with a student by using a homophobic slur.

Earlier, Foxx was one of a number of men who created an “unusually raucous” atmosphere at a March 9, 2022, town hall held by failed far-right congressional candidate Joe Kent in Onalaska, Washington. Kent – who had come under pressure during his primary campaign over his far-right ties – had publicly denounced Nick Fuentes two days before the town hall.

Foxx reportedly drove five hours to attend the event in support of Fuentes, where he and five others fired hostile questions at Kent, pressing him to acknowledge the “Great Replacement” narrative.

If you have information about extremist activity in North Idaho, you can email tips to the author of this article.