Carina, an immigrant woman who spent a half dozen years working in the fields, recently spoke about her experiences during congressional briefings in Washington as part of the Southern Poverty Law Center's national campaign to raise awareness about the sexual exploitation of immigrant women in the food industry.

Carina spent a half dozen years working in the fields.

After coming to the United States from Mexico, she became part of the vast army of immigrant women who help produce the cornucopia of food Americans eat every day. Among other jobs, the mother of three planted onions and picked tomatoes, beets and potatoes.

Not only did she experience the grueling labor in the fields, she saw firsthand the sexual exploitation immigrant women often endure on the job. When Carina worked at an onion warehouse, she witnessed a supervisor making advances and touching the women workers.

"He used to tell us that we had to let him touch us," she said. "Otherwise, he would tell the manager that we were not doing a good job and fire us."

One of the supervisor's friends also touched the women, and even hit one of Carina's co-workers. "She never said anything, because she was afraid of being fired and she feared immigration," Carina said.

Her co-worker had three children in Mexico and needed the job to send them money. Returning to Mexico meant returning to the grinding poverty she had fled.

Carina recently spoke about her experiences during congressional briefings in Washington as part of the Southern Poverty Law Center's national campaign to raise awareness about the sexual exploitation of immigrant women in the food industry.

When Carina first arrived in the United States, she had her own reason to remain silent when mistreated on the job. Back in Mexico, she was a victim of domestic violence. When she attempted to report it, the police told her that if a man struck her, it was because she did something to deserve it.

"When I came to the United States I thought that if nobody wanted to help me in Mexico, which was my home country, it was even less likely that I would get any help here," she said.

It's a belief other immigrant women may bring to the United States, one that can silence them when they are victimized on the job.

"We feel that we cannot report abuses for fear of losing our jobs," Carina said. "Many people are also afraid because managers and supervisors threaten to call immigration if they complain."

In the 2010 study, Injustice on Our Plates, based on in-depth interviews with 150 immigrant women who have worked in the U.S. food industry, the SPLC found that sexual harassment and even brutal sexual assaults by male co-workers and supervisors are a constant threat for many of these workers. Some of these women, who worked in various states across the country, saw it as a danger that simply must be tolerated for a day's pay.

A separate study published in 2010 found that among 150 women of Mexican descent working in the fields in California's Central Valley, 80 percent said they had experienced sexual harassment. That compares to roughly half of all women in the U.S. workforce who say they have experienced at least one incident.

In the mid-1990s, the U.S. Equal Employment Opportunity Commission investigated the sexual harassment of California farmworkers and found that "hundreds, if not thousands, of women had to have sex with supervisors to get or keep jobs and/or put up with a constant barrage of grabbing and touching and propositions for sex by supervisors." A 1989 article investigating sexual harassment against farmworker women in Florida found harassment was so pervasive that women referred to the fields as the "green motel."

Carina and her co-workers eventually took the unusual and courageous course of reporting the problems at the onion warehouse to the company. Unfortunately, the company failed to properly address the issue, Carina said. She ultimately left the job.

Today, Carina has dedicated herself to educating people about the dangers immigrant women face on the job.

"I never imagined I would have the opportunity to talk about what immigrant women go through," she said. "Most of my time living here, I have felt like I had to hide. I felt I could not go to the police. I felt that there was nobody who could help me. I'm here because I want all of this to come to light so that other women do not have to suffer." 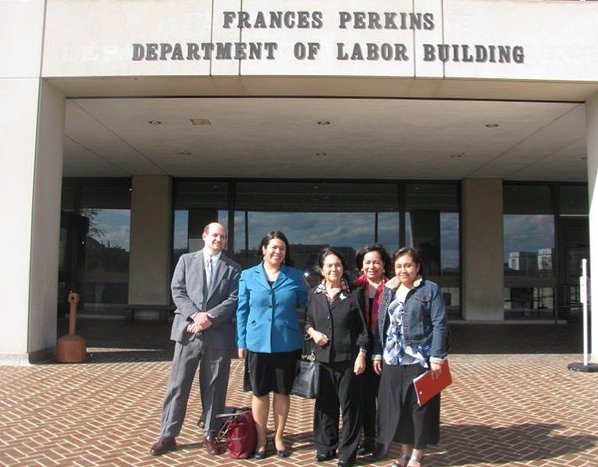