On Sunday night, June 26, MSNBC will air "Erasing Hate," a documentary that chronicles the redemptive story of a violent, racist skinhead who renounced the white power movement and, with the help of the SPLC, underwent an excruciating series of laser treatments to remove the racist tattoos that covered his face and hands.

For years, Bryon Widner thrived on hate as a violent skinhead – a razor-carrying "enforcer" who helped organize other racist gangs around the country. His hate was literally etched on his face in the form of tattoos with racist and violent themes.

But with the help of the Southern Poverty Law Center – the nation's leading monitor of hate and extremist activity – Widner left the white power movement and endured nearly two years of excruciating laser treatments to remove the tell-tale tattoos so that he could start a new life with his wife and children. 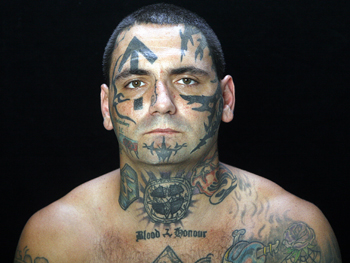 On Sunday night, his story will be told in "Erasing Hate," which airs at 9 p.m. EDT on MSNBC. The one-hour documentary recounts Widner's life within the white power movement, the decision that led him and his wife to leave it, and the procedures he received.

"This is a powerful story of human redemption," said Joe Roy, the SPLC's chief investigator, whose meeting with Widner led to the removal of his tattoos and, ultimately, the documentary. "Bryon, by his own admission, did horrible things in his life. But he made the decision to reject racism and leave behind his life of hate and violence. We see so many people in our work who have gotten caught up in the hate movement, usually when they're young. What we hope is that Bryon's story will inspire others to change."

During his 16 years as a skinhead, Widner became known as a vicious brawler who would fight at the slightest provocation. He helped create the hard-core Vinlander Social Club skinhead gang, one of the fastest growing skinhead groups at the time. Today, he says he's haunted by the things he saw and did.

Widner gained notoriety within the movement for the tattoos covering his face and body. Eventually, he caught the attention of SPLC officials, including Roy, a former police detective who has spent 25 years monitoring hate and extremist movements for the SPLC.

"He was the pit bull of the movement," Roy said. "He was an in-your-face type of guy. He had a reputation of being an enforcer."

In 2005, at a white power music festival in Kentucky called Nordic Fest, Widner met his future wife, Julie, who was also active in the white power movement. Together, they began to see the hypocrisy of the skinhead culture and realized it was no place to raise a family. Despite death threats and harassment, they left the movement.

As Widner attempted to get his life on track, the tattoos that made him an intimidating force in skinhead circles became a liability as he searched for a job to support his family. Since he couldn't afford to get his tattoos removed, it seemed his racist past would remain branded across his face. 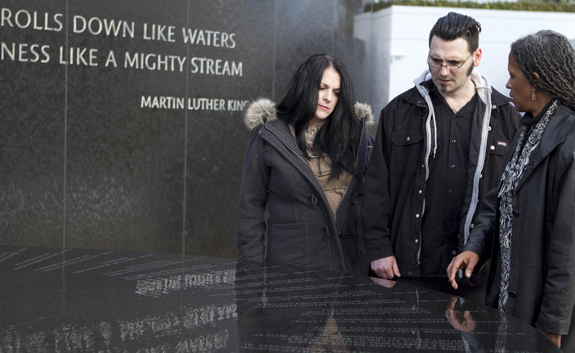 Then he found an ally in a former enemy – the Southern Poverty Law Center. After SPLC officials learned of Widner's struggle, Roy and Laurie Wood of the SPLC met with him.

"It was obvious he'd had a change of heart, but, unfortunately, most people would only see the tattoos," said Roy, who appears in the documentary. "They would only see his past. His outside didn't reflect the change that had taken place on the inside."

The SPLC provided financial aid that allowed Widner to get the tattoos removed from his face and hands at Vanderbilt University Medical Center in Nashville. Each treatment left Widner's face badly blistered and swollen – a sort of penance for his violent past.

"Erasing Hate" was written, directed and produced by Bill Brummel. Brummel earlier produced two classroom documentaries for the SPLC's Teaching Tolerance project – "Viva la Causa" and "Bullied: A Student, a School and a Case that Made History."

Several months ago, Bryon and Julie visited the SPLC along with Brummel and the documentary film crew, to speak to the staff and thank the organization personally.

"We wouldn't be making this change in our life, because we would have never been able to afford it," Julie said. "We owe them so much. …I'm so incredibly grateful." 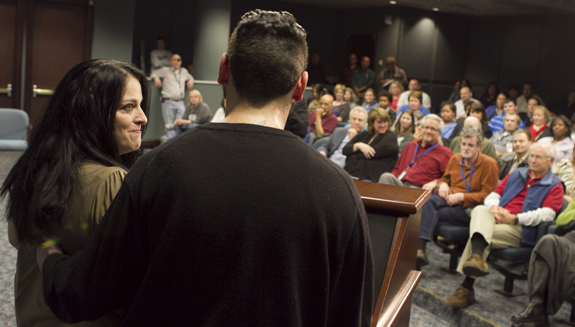 Bryon and Julie speak to the SPLC staff during their visit to Montgomery.