The Southern Poverty Law Center asked a federal court late yesterday to block efforts by House Republicans to further delay a decorated 12-year U.S. Army veteran in a legal same-sex marriage from seeking the same benefits provided to other married veterans and their spouses.

The Southern Poverty Law Center asked a federal court late yesterday to block efforts by House Republicans to further delay a decorated 12-year U.S. Army veteran in a legal same-sex marriage from seeking the same benefits provided to other married veterans and their spouses.

The court recently allowed the Bipartisan Legal Advocacy Group (BLAG) to intervene in the case, which was filed by the SPLC in February on behalf of Tracey Cooper-Harris and her wife Maggie.

BLAG continued its attack on the couple and other gay and lesbian veterans by asking the court to delay the case and to refuse the couple prompt resolution of their claims. The couple has been denied dependency benefits available to married veterans because the federal government will not recognize marriages of same-sex couples.

“It is appalling and reprehensible the lengths that some members of Congress will go to deny these veterans their hard-earned benefits,” said Christine P. Sun, deputy legal director for the SPLC. “Federal courts have already blocked this law because it is unconstitutional. Yet, House Republicans continue their efforts to deny gay and lesbian veterans equal rights while these veterans and their families struggle financially – living without the benefits they have earned.” 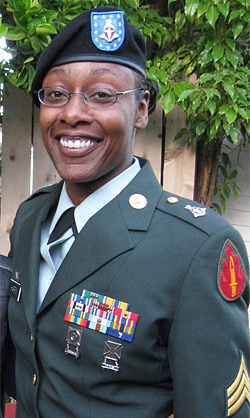 Tracey Cooper-Harris served for 12 years in the U.S. Army and received multiple commendations.

Earlier this year, the Department of Justice announced that it also would not defend the similar definition of marriage under Title 38, the federal statute that relates to veterans benefits.

“I am very discouraged that lawmakers are compelled to force families like Maggie and me to live without the benefits I earned during my service to this country,” Tracey said. “It is frustrating for Maggie and me that BLAG now also wants to deny us our day in court. Forcing veterans – or any American – to suffer discrimination in silence is not representative of the America I fought to defend and protect.”

In 2010, Tracey was diagnosed with multiple sclerosis (MS), which the VA has determined is connected to her military service. There is no known cure for MS, a disabling disease that attacks the brain and central nervous system. Tracey applied for additional disability compensation as a married veteran to help ensure that Maggie has some financial stability when Tracey's disease makes it difficult for Tracey to care for herself. These additional benefits are routinely received by heterosexual married veterans, and are being denied to Tracey and Maggie only because they are both women.

The couple, a typical working-class family, is on a limited budget. Maggie is an apprentice at an electricians union, and Tracey is a graduate student who only recently got a job with the local VA. The additional benefits Tracey and Maggie are entitled to from Tracey’s years of military service would offset some of the economic strain resulting from Tracey’s medical condition, and would also enable the couple to afford measures recommended by Tracey’s doctor to slow the progression of her MS.

The lawsuit filed by the SPLC in February charges that the Department of Veterans Affairs is discriminating against Tracey and her wife by denying them benefits available to other married veterans and their spouses, even though their marriage is legally recognized in California, the state where they live.

The VA denied the benefits because Title 38 defines “spouse” as “a person of the opposite sex.” Even if the department changes its definition of “spouse,” DOMA defines marriage for all federal purposes as between one man and one woman as husband and wife.

A video detailing how DOMA is harming veterans and their families like the Cooper-Harris family can be viewed here.