The SPLC today urged the Justice Department to investigate the Jefferson County Jail in Birmingham, Ala. – an overcrowded lock-up where violence, neglect and abuse are common, especially for children.

He had been sleeping on the floor of his overcrowded cell when four adult detainees attacked him. They beat his head against the floor and cut his throat with razors. It was a brutal attempt to intimidate the youth and prevent him from testifying in court.

As he felt consciousness slipping away, he pressed the cell’s intercom button repeatedly to summon a guard. It would take two hours for the guard to respond. During the wait, the teen had to fend off one of his attackers before he was finally taken to a hospital.

This vicious 2013 attack at the Jefferson County Jail in Birmingham, Ala., is one of the incidents described in a letter the SPLC sent to the Special Litigation Section of the Civil Rights Division of the U.S. Department of Justice today. Based on more than 50 interviews with 20 youths under the age of 18, the letter describes an overcrowded jail where violence, neglect and abuse are common – especially for children awaiting trial. The SPLC asked the DOJ to investigate these civil rights violations pursuant to its authority under the Civil Rights of Institutionalized Persons Act of 1980.

“Let’s be clear: these children have not been found guilty of any crime and even if they had, the abuse and neglect that they are forced to suffer is cruel and unusual,” said Ebony Howard, SPLC senior staff attorney. “These children are unquestionably more damaged than adults by the conditions they endure in this facility; further, any chance they have to be rehabilitated is taken from them.” 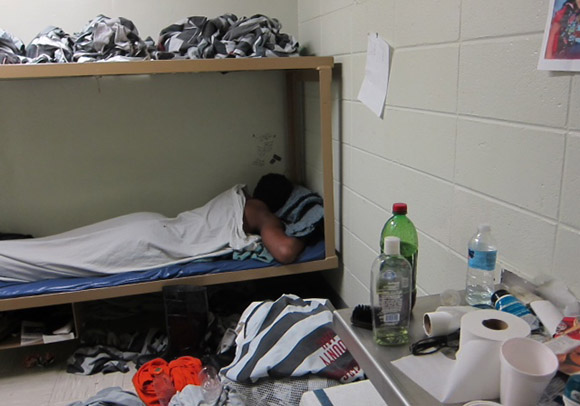 The jail houses children under the age of 18 because Alabama allows teens as young as 16 to automatically be charged as an adult for certain offenses. Even children as young as 14 can be transferred to circuit court by a juvenile court judge for any offense. Their young age often makes them vulnerable to attacks by older detainees in this adult jail. Sometimes they’re targeted for beatings. Other times, it’s sexual assault.

Young detainees quickly realize they must stand up for themselves, sometimes with violence, or become a victim – a philosophy that adds fuel to an already combustible environment. A girl who entered the jail at 16 endured relentless sexual harassment from other female detainees. Because she got into many fights fending off advances, she spent much of her time in solitary confinement: 11 months of the two-and-a-half years she spent there.

Several children told the SPLC of an inmate known to target youths for sexual assaults. They recounted an incident where the man called a boy into his cell. The young man, who appeared to be 19, was ordered against the wall and sodomized.

The older detainee was put in isolation.

A guard assembled all the detainees on the cell block to make an announcement. “We gotta stop all the … raping,” he said. “If it doesn’t stop, I’ll personally make sure it stops.”

Despite the warning, the perpetrator eventually returned to the jail’s general population. He’s now in a coercive relationship with another youth who is forced to perform sexual favors to receive food from the older detainee.

Guard abuse, neglect
Young people also have had to deal with life in an overcrowded and understaffed jail. Though it was built to house 1,075 people, the jail has been over capacity for the last several years. In 2011, there were only 19 deputies guarding 1,200 people.

Too often, teens feel they must defend themselves against guards frustrated with overseeing so many people. For example, when a young man being moved to a disciplinary cell tried to tell a guard that he didn’t do anything wrong, the guard asked him what he said. When the young man responded, the guard fired pepper spray into the young man’s mouth and hit him in the back of the head, according to the letter.

It didn’t seem to matter to the guard that the young man suffers from asthma.

One child told the SPLC about a staff member ripping up her mail and throwing it into the toilet before asking her, “What are you going to do about it?”

A guard even told an SPLC staffer about his frustrations with the teens housed there. During the conversation, he made several gestures to demonstrate how he would assault them, jerking one shoulder forward as if barreling into someone. A youth later told the SPLC that the guard has a particular disdain for young people, often inciting confrontations.

But the disregard and neglect of those housed in the jail may pose an even greater threat. Children are told not to use the intercoms in their cells to contact the guards “unless you’re bleeding or dying.” Their intercom calls are often ignored – even in the case of the 17-year-old whose throat was cut with razors.

Although that teen was eventually treated at a hospital for a concussion and given morphine, it appears he was never returned to the hospital for the recommended follow-up treatment. Instead, he was held in the jail’s medical unit for three weeks and given only Tylenol for his pain.

Almost all of the children interviewed by the SPLC reported inadequate medical care. Jail nurses hand out Tylenol and creams for almost every ailment. One young female received no postnatal care despite having given birth four weeks before entering the jail. The stitches she received as a result of childbirth were never removed. It took two years of submitting sick requests for her to receive treatment for a yeast infection. 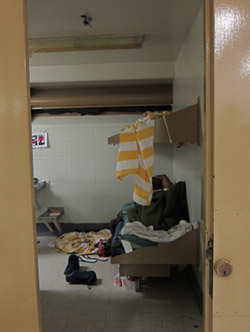 One youth discovered he tested positive for exposure to tuberculosis only after SPLC advocates reviewed his medical records. Though his infection was not active, treating latent TB greatly reduces the likelihood that the disease will progress, according to the Centers for Disease Control. Since arriving at the jail, the youth has not been tested again to determine if the TB has become active.

A number of children never received any of the mental health medication they had been taking before arriving at the jail. Some, desperate for relief from their symptoms, resort to taking medication prescribed to other detainees, the SPLC found.

One youth, who was taking a number of medications for conditions that included depression, schizophrenia and obsessive compulsive disorder, received medication only for his attention deficit hyperactivity disorder. The other conditions have gone untreated for more than a year. They’ve become worse since he has been in 23-hour lockdown. He has racing thoughts and sees and hears imaginary people in his cell.

“I feel like I’m losing my mind without medication and treatment,” he said.

Other children also have been punished with long periods in isolation. One youth spent a total of almost 330 days in isolation. These stints, where the youth was locked down for 23 hours a day, ranged from two weeks to nine months. After being in isolation for six consecutive months, the youth begged to be let out.

“I promise not to cause any more trouble; please give me another chance,” the child pleaded.

Unsanitary conditions
Children housed in the jail also endure dirty, overcrowded conditions. Despite the recent opening of the nearby Bessemer Jail to alleviate overcrowding, the Jefferson County Jail continues to house three to four people in cells designed for two.

One youth reported that his toilet overflowed, sending human waste onto the floor where he and another detainee slept. It was four days before the toilet was fixed. The youth and his cellmates were never provided with products to clean their cell.

Even when the plumbing works, everyday life in the jail is filthy and miserable. Children are; allowed to shower only once every four days. A child placed in disciplinary segregation said he was allowed to shower only twice in 21 days. Laundry is completed only once a week. In the interim, youth who want clean underwear must wash their undergarments in the cell toilet.

Children hoping to use their jail time to create a better future face obstacles. The jail offers few opportunities for them to complete their high school education. Educational services consist of sporadic training for a GED (General Educational Development) certificate. Yet many said they filled out multiple requests to attend the GED program, only to have those requests go unanswered. Several said they did not want GED training but rather an opportunity to actually finish high school.

A better future
A key to addressing these problems may be awareness, said Rickey Ward, 22. As a teenager, Ward was housed at the jail. He says the lack of rehabilitation opportunities has transformed the jail into a “storage house” for human beings.

It’s also why the SPLC is shining a light on these conditions and calling for federal action.

“These children should not be forever damaged as a result of their time at the Jefferson County Jail,” Howard said. “If we care about our young people, our communities and the future, we cannot tolerate this abuse and neglect.”