The award was presented in partnership with the Spiritual Assembly of the Bahá'ís of Atlanta. 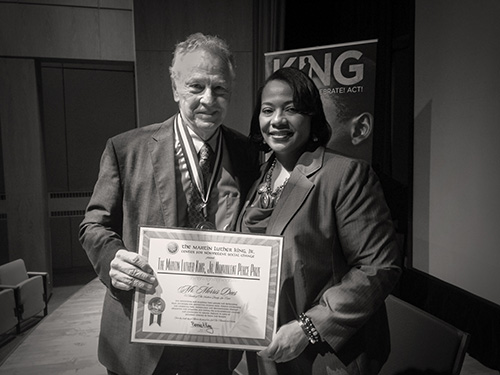 ...a day that marks the passing of a true prophet.

Our sense of loss is still palpable.

Our need for leadership still so great.

“I’m deeply honored to receive this award,” Dees said. “Like millions of other people, I was inspired by Dr. King to do my part in the struggle for equality. When we started the Southern Poverty Law Center in 1971, our goal was simple: We would use the courts to help ensure that the promise of the new civil rights law would become a national reality. I’m thankful that, with the support of many dedicated colleagues and passionate supporters, we’ve been able to make a difference.”

The award has been presented by the King Center since 1973 to recognize individuals who emulate and embody King’s spirit. It’s awarded for a commitment to nonviolence as a way of life through which social justice, human rights, and civil liberties are attained for each individual. It also recognizes achievements in eradicating poverty, racism, and the successful quest for alternatives to war.

“Morris Dees has tirelessly, and bravely championed the rights of the disenfranchised,” said Dr. Bernice A. King, CEO of The King Center and daughter of the slain civil rights leader. “He has selflessly taken it upon himself to be a beacon of light in the Deep South when very few had the courage to stand against the darkness of injustice. Mr. Dees, through the Southern Poverty Law Center, has purposed his life to expose hate and discrimination, and seek justice on behalf of those who have been violated. Our hope on this significant day is that families who have experienced violence as a result of hate would be comforted by this celebration of love’s triumph.”

It's an honor to be here today.

And it's also quite humbling.

...a day that marks the passing of a true prophet.

Our sense of loss is still palpable.

Our need for leadership still so great.

Out of the window on the north side of our office, we see the church that he pastored in Montgomery.

Out the window on the south side of our office, we see the Civil Rights Memorial.

It's a great circular stone over which water flows.

History is etched in its stone.

It tells the story of the civil rights movement from the 1954 decision in Brown v. Board of Education to Dr. King's death in 1968.

...it remembers the bus boycott, the March on Washington, and the March from Selma to Montgomery.

...and it remembers the great legislative victories of the movement that Dr. King led -- the Civil Rights Act of 1964 and the Voting Rights Act of 1965, an act that is under attack from so many quarters today

Etched in its stone, the memorial also remembers the martyrs of the movement,

...Dr. King, of course, and others who were killed because of their activism,

...but also Emmett Till,

...and those four little girls who were killed in the bombing of Birmingham's 16th Street Baptist Church by Klansmen bent on holding back the march for justice.

Between the first entry on the Memorial and the last, there's a blank space.

We left it there because we knew that there would be more victims of senseless violence in the years ahead,

...more who would be killed because of the color of their skin, their ethnicity, their religion, their sexual identity, their activism.

In the last year, we've had to symbolically add more names to the roll of martyrs.

They were killed by a young man with hate in his heart and a gun in his hand,

...a white man who had been welcomed into a black church to pray.

When we heard about the Charleston massacre, we were shocked.

No one more so than Morris.

He remembered how the members of his small rural church had walked out on him when he suggested, the Sunday after the bombing, that they offer a prayer for the little girls who had been slain.

He thought back to the lawsuit he had filed that had bankrupted the Klan group that had bombed the church.

And he wished that history did not seem to be repeating itself.

We had alerted the law enforcement community to the danger of lone wolf terrorism.

We had alerted the country to the extremism that it's being cultivated on the Internet.

But there was little we or anyone could do to stop one young man with hate in his heart.

Last month, Morris asked me to go to Charleston.

To be part of a congressional delegation, led by Representatives John Lewis and Jim Clyburn and Senator Tim Scott, which wanted to visit a city that had shown so much strength in the face of so much heartache.

While we were there, we had the opportunity to hear first hand from family members of the victims of the massacre at Mother Emanuel.

As long as I live, I'll never forget their words.

One of the family members who shared her story with us was Felicia Sanders.

She had prayed with the killer before he pulled out his gun.

She was in the room when her fellow church members were shot.

She was there with her son, a granddaughter, and an aunt.

When the killer opened fire, she hid under the table with her granddaughter, pretending to be dead, trying to comfort the little girl and keep her quiet.

Her son, Tywanza Sanders, lay next to her, bleeding from a bullet wound.

She urged him to play dead as well.

But when he realized that the killer had turned his gun on his great aunt, Susie Jackson, he could not be silent.

The killer said he had to because black people were taking over the country.

Tywanza replied, "You don't have to do this.  We mean you no harm."

Those were his last words.

Incredibly, Ms. Sanders told us that she had forgiven her son's killer.

It was not the forgiveness of someone who was weak.

It was the forgiveness of someone who was strong,

...of someone who refused to allow hate to consume her.

...”Someone, somewhere must have enough sense to cut the chain.”

The Charleston killer told the police that he wanted to start a race war.

The good people of Charleston, however, had another idea.

They formed a chain of unity -- ten thousand persons strong -- that stretched across the racial divide and across the bridge that connects Charleston to Mount Pleasant.

Alana Simmons, the granddaughter of the Rev. Daniel Simmons, one of the victims, said it best when she told the Charleston killer at his arraignment "hate won't win."

We can't let it, or we will be consumed by it.

The morning after we heard from Ms. Sanders about the heroism of her son, we went to services at Mother Emanuel.

The new pastor there is the Rev. Dr. Betty Deas Clark -- no relation to Morris.

But otherwise, it was a regular Sunday service, one filled with prayer, wonderful music, and Pastor Clark's humor and powerful sermon.

Near the end of the service, Pastor Clark asked if anyone new wanted to join the church.

She and Rev. Clark spoke privately for a few moments, and then Rev. Clark asked the woman if she would tell the entire congregation what she had just said.

The woman took the microphone, turned to the congregation, and said that she wanted to join the church because the service that morning had been the most moving spiritual experience of her life.

There were tears in her eyes.

The congregation erupted in applause and welcomed her.

The woman, I should add, was white.

As a church elder at Mother Emanuel had said, "No evildoer ...can close the doors of God's church."

When I told Morris how the Mother Emanuel congregation had embraced that white woman, he said that they had expressed the kind of love that we hear so much about but know so little of.

The kind of love that conquers hate.

The kind of love that can heal our wounds.

Make no mistake about it: the congregation at Mother Emanuel knows that race still matters.

The community of Charleston may have come together as never before, but race still matters.

The Confederate flag may have come down from the South Carolina state Capitol, but race still matters.

...Poverty rates in our country,

...In one police shooting after another,

...In the fact we spend so much on our prisons and so little on our schools, and

...In the hopelessness and despair in so many of our communities.

And so does everyone at the Southern Poverty Law Center.

Morris will never let us forget it.

I mentioned earlier that there is a blank space on the Memorial, the space between the first entry -- the Supreme Court's decision in Brown v. Board -- and the last entry -- Dr. King's death.

The space reflects not only that we knew there would be more martyrs to the movement.

...but also that the civil rights movement didn't begin with the decision in Brown and didn't end with Dr. King's death.

It continues through the work of everyone who is committed to making Dr. King's dream a reality,

...to building the Beloved Community of which he so often spoke,

...to healing the wounds of racism that still scar our country.

On behalf of my colleague and mentor, Morris Dees, I want to thank you for the great honor that you have bestowed on us today.

But I promise you that we will not rest on our laurels.

On this, the 48th anniversary of Dr. King's death, I promise you that we will continue our work toward that dream that we all share.

I promise that we will continue to pray with our marching feet.

And I promise you – as Morris said, quoting Dr. King, as he accepted the award today – that we will not be satisfied until justice rolls down like waters and righteousness like a mighty stream.

Thank you so much.