Growing up Black and blind in a small Georgia farming town in the 1960s, Gaylon and Stancil Tootle learned early: Rise up or the world will keep you down.

The brothers, who have the same congenital cataracts that blinded their mother, could see little more than shadows. Their father, Greeley Tootle, was blind too, his sight lost to gunfire when he was 18. Their hometown, Glenville, was segregated, with a balcony in the movie theater for Black patrons and a back door rule for Black clients at businesses. In the town hall, everyone in power was white. In the fields, everyone hauling watermelons, harvesting onions and hanging tobacco leaves was Black.

But the Tootle family did not believe in living in the shadows. Greeley Tootle used his memory, his wits and his knack for perceiving patterns to work in the fields alongside sighted hands. At home, he taught the boys, along with their four siblings, to stand up for themselves. When Gaylon Tootle learned that a Black boy at his school had been kicked off the school bus for fighting after a racial slur was thrown his way, his father successfully petitioned the school board to allow the student to ride the bus again.

When campaign season came around, white politicians courted Greeley Tootle – and the votes he could bring them. When a Black state senator came to town in 1976 to protest inhumane conditions at a nearby prison, local leaders refused to talk to him. Tootle invited him to the family home instead, to meet with the Black community.

Still, Greeley Tootle understood the limitations of home. When Gaylon was 6, his parents put him on a bus to Macon, Georgia, setting aside their yearning to keep him at their side for the opportunity to secure him – and later his brother – an education at the Georgia Academy for the Blind.

“They recognized that living in that small, rural town was not going to help us,” said Gaylon Tootle, now 62.

He said his parents wanted the boys at a place where they could explore the wider world, learn Braille and most of all learn to be proud of who they are.

“It was hard. My mother cried when they put me on the bus. But my father always stressed that this is not where you want to be. He was the driving force in helping us get out of there. He always told us we can live the life we want.”

Today, Tootle lives the life he wants. He has a marriage he calls “a fairy tale.” He has children, grandchildren and a career standing up for people. But his path has been arduous, his days are filled with obstacles, and his experience is bringing light to a new struggle as he fights for others with disabilities whose voting rights are being shredded by a new law in Georgia. His story is among those told in the premiere episode of a new season of the Southern Poverty Law Center’s Sounds Like Hate podcast.

Tootle has harnessed his understanding of living with a disability to create a life of meaning. As vice president of the Georgia chapter of the National Federation of the Blind, he advocates for better educational opportunities for students with blindness and other disabilities. He is an independent-living advocacy coordinator at the nonprofit Walton Options, which serves thousands of people with disabilities across 16 counties in the state. He speaks at forums throughout Georgia on disability rights, and he has a long history of speaking out on social justice issues. 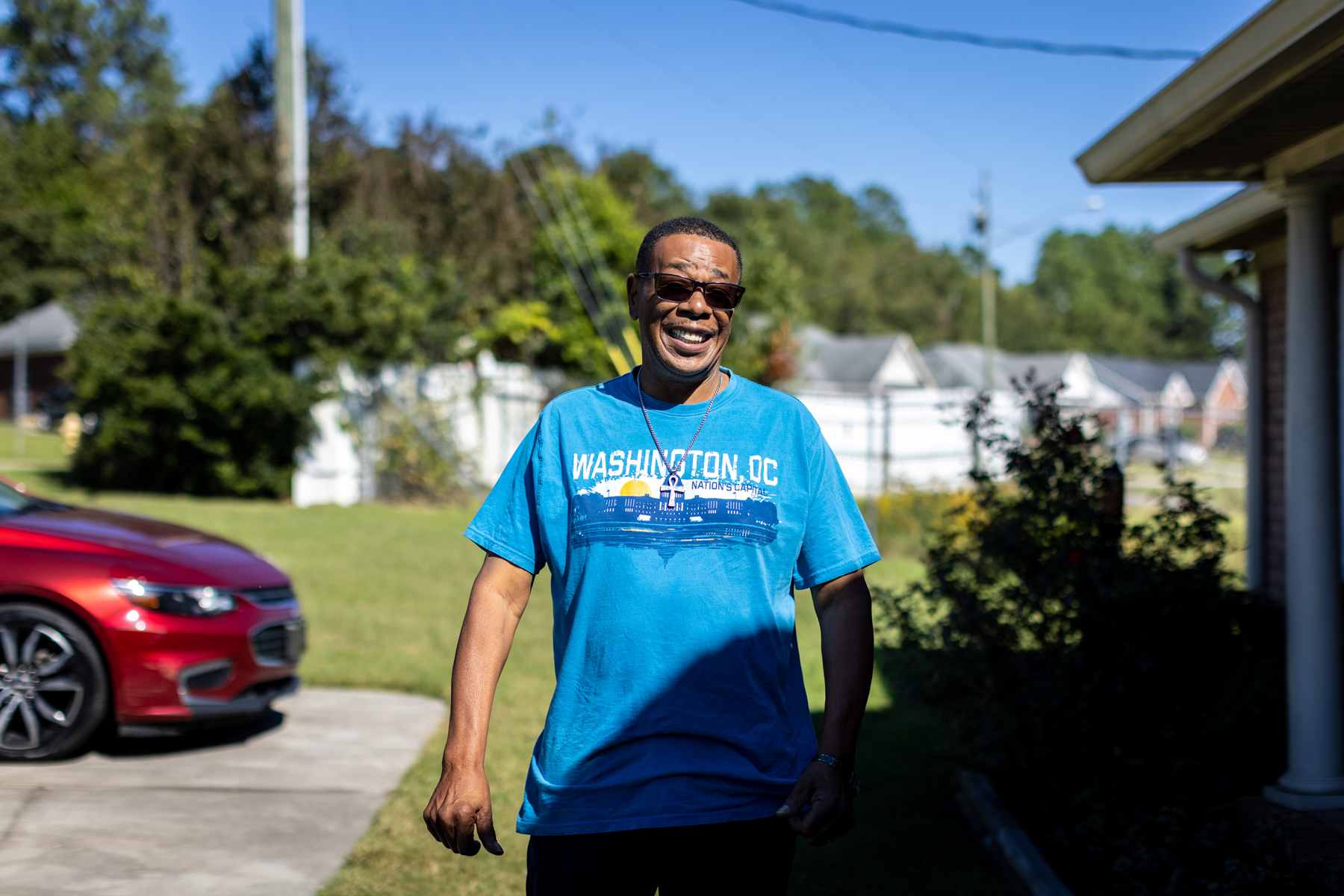 Gaylon Tootle smiles in front of his home in Augusta, Georgia.

On Tuesday nights his brother Stancil, an advocate in his own right, holds a weekly internet forum on issues facing people with disabilities. “Tuesdays with Tootle” has a loyal following, and, invariably, Gaylon joins in.

But for the broader community of people with disabilities, Tootle wants more. He believes fiercely that the battle for civil rights crosses boundaries of race, class, abilities and economics. And he believes that representation is at the heart of the solution.

These beliefs have taken him to the center of the voting rights storm in his home state, where a tsunami of new ballot restrictions enacted this year threatens to mute the political voice of a whole swath of society – people who daily face the challenges of disabilities and who know that without real political representation, inequities will forever continue to shadow their daily lives.

The new Georgia voting law limits early voting, removes drop boxes for ballot collection and provides no way for blind people to review their ballot selections without assistance. Among other things, it adds requirements that make it harder for blind people to fill out absentee ballot applications and absentee ballots themselves. A provision that voters can no longer cast a valid provisional ballot if they are at the wrong precinct before 5 p.m. hits hard at voters with disabilities who may be confused about where to vote, especially given frequent last-minute changes to polling sites.

A widely derided plank of the law even prevents anyone but election officials from handing out water to people standing in line to vote. All that means hardship for the estimated one in four Georgia residents – more than 2 million people – with disabilities.

“These new laws, it is just like the way they’ve always done it in the old South,” Tootle said. “It’s a subliminal, surgical cutting away of rights, and doing it under the guise of a smile. The politicians, they say, ‘It’s really not this, it’s that.’ They say that while at the very same time they are disenfranchising people like me.”

Those sorts of surgical cuts to voting rights for people with disabilities are being mirrored in other states. In Alabama, for instance, absentee ballots and applications are inaccessible to voters who are blind or have print disabilities, which violates federal law. Polling places – including those made available for in-person early absentee voting – also fail to have uniformly available ballot marking devices accessible for voters with disabilities that federal law requires, and for which the federal government specifically allocates funds.

The SPLC – along with co-counsels Alabama Disabilities and Advocacy Program, LaBarre Law Offices p.c., and the law firm Brown, Goldstein & Levy – has filed an administrative complaint on behalf of the National Federation of the Blind, the National Federation of the Blind of Alabama, and individual complainants asking the U.S. Department of Justice to investigate Alabama’s absentee voting program.

The complaint alleges the state is violating the Americans with Disabilities Act and the Rehabilitation Act of 1973 by failing to provide an absentee voting program that is fully accessible to voters who are blind or have print disabilities.

“Every voter is entitled to a private independent vote, whether in person or by absentee ballot, you’re entitled to vote on your own without anybody knowing who you voted for or what party you choose to vote for in a primary,” said Caren Short, senior supervising attorney for the Voting Rights Practice Group at the SPLC.

“If you are a person who is blind or has a print disability – meaning you cannot hold a pen without assistance – and the system of voting relies on a paper ballot, or a paper application for an absentee ballot, which requires you to use a pen to fill out, then you necessarily have to have someone else complete your application or your ballot for you or help you do it. That removes that private nature of your ballot. And that violates the law.”

‘Taking it to the mat’

Back in Georgia, Tootle puts the weight of his considerable standing in the community behind efforts to improve access for people with disabilities. He says that 17 years of competitive wrestling, starting at the Academy for the Blind and then competing on state and national levels for the University of Georgia, where he majored in political science, taught him to fight.

“Wrestling to me was one on one, man on man, and I’ve always applied those lessons in my life too,” Tootle said. “Wrestling taught me that I want to win every time. That means that if I apply for a job, if I feel like you mistreated me, if you don’t let me cast my ballot, I’m going to act.”

Since the new voting restrictions became law, Tootle has been working nonstop, like many in Georgia, to evaluate the implications of the law and ensure that voters with disabilities can still exercise their right to vote.

“We’re working hard down here in Georgia,” Tootle said. “We know what we’re up against.”

Hunched over a computer with oversized keys and a screen reader for the blind, he is on the phone and in consultations daily with other voting rights advocates, lawyers and politicians seeking a way forward. He has called lawmakers, written newspaper columns and protested on the street.

He tried to testify at hearings on the legislation, but he and other disability rights advocates said lawmakers they contacted failed to respond to queries about how to do so remotely. In June, he and other voting rights advocacy leaders in Georgia met with Vice President Kamala Harris to discuss how to advance voting rights.

“It takes a lot of courage to stand up and speak, and he’s doing that despite the personal challenges that he faces,” said Poy Winichakul, a staff attorney for the Voting Rights Practice Group at the SPLC, which has filed a lawsuit against Georgia on behalf of a coalition of civil rights organizations, including The Arc Georgia, which educates and advocates for people with disabilities.

“As a person with a disability, he’s speaking from an experience that spans economic and racial lines,” Winichakul said. “Yet, people with disabilities are routinely forgotten about, if not outright ignored. Georgia’s law does exactly that. It ignores the unique challenges they face while casting ballots, and it diminishes their fundamental right to vote.”

Tootle has no intention of being ignored.

To be heard, he is employing the same power that elevated him to leadership positions in high school and college – the same power he used in civilian careers with the U.S. Army and Air Force and that he learned picking tobacco, “like everyone else” back in his hometown.

“I always worked, because my mom and daddy taught me that,” Tootle said. “All we ever wanted was an equal shot. If the playing field is level, we can get there. But we are at probably the most dangerous period in my lifetime. We are at a critical time right now for voting rights. This thing is serious. These people have no shame in what they’re doing. We’re taking it to the mat. Losing is not an option.”

Pictured at top is Gaylon Tootle, vice president of the Georgia chapter of the National Federation of the Blind. (Credit: Dustin Chambers)