Eatonville is established during Reconstruction by newly emancipated African Americans with the motto, “The Town That Freedom Built.”

The Robert Hungerford Normal and Industrial School is established on donated land after Black leaders of the town petition Booker T. Washington to assist them in starting a school. The school becomes a backbone of the community.

Their Eyes Were Watching God, a novel by Zora Neale Hurston, who grew up in Eatonville, is published. 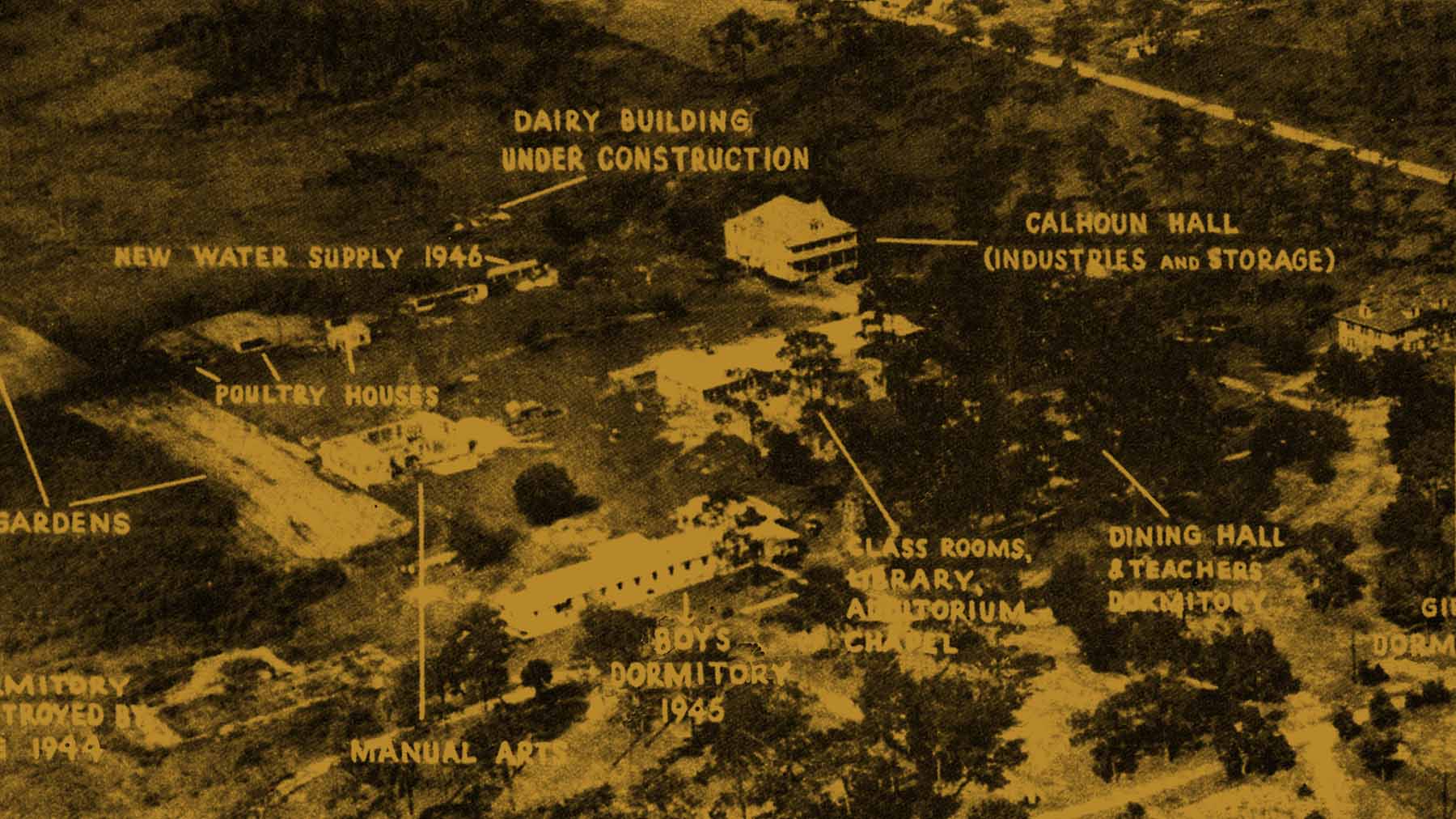 The Hungerford property in Eatonville, Florida, in the 1940s. In 1951, the school district of Orange County, Florida, where Eatonville is located, bought the school property from the Black-run trust that owned it, under the condition that the school would be used to educate Black children. (Courtesy of the Association to Preserve the Eatonville Community)

The school district of Orange County, Florida, where Eatonville is located, buys the school property from the trust that owned it under the condition that the school would be used to educate Black children. The sale goes forward despite the objection of one of the trustees, who contests the sale all the way to the Florida Supreme Court as a violation of the original purpose of the trust. The school district later demolishes the historic buildings of the original school and builds a public school on the land.

After a new interstate highway bisects the Hungerford property, the school district opts to sell off the section on one side of the highway. To do so, the school district wins permission from the courts to dissolve the restriction on that section mandating the use of the property as a school for Black children. The remaining part of the property, where Hungerford High School continued to operate, retained the restriction.

Alice Walker, Pulitzer Prize-winning author of The Color Purple, pens an essay about her search for Zora Neale Hurston, whose stories had gone out of print following her death in 1960. Walker discovers Hurston’s unmarked grave in Fort Pierce, Florida, in 1973 and purchases a headstone inscribed with the words “A Genius of the South.”

The first Zora Neale Hurston Festival of the Arts and Humanities, also known as ZORA! Festival, is held in January to celebrate African American history and culture. The Zora Neale Hurston National Museum of Fine Arts is established by the Association to Preserve the Eatonville Community. The museum holds its first exhibit in July of this year.

Eatonville sues the school district and successor trustees of the Hungerford trust to release the deed restriction. In the complaint, Eatonville argues that the balance of the property is best suited for commercial development and that it is seeking to purchase the land from the school district for development. But according to the complaint, the deed restriction prohibits such a sale, and Eatonville needs the restriction released to increase its “ad valorem tax base and provide health and safety services to its citizens.”

The trustees, the Town of Eatonville and the Orange County Public Schools enter into a settlement agreement, amended in this year, in which the school district agrees to pay $1 million to the Robert Hungerford Chapel Trust for the release of the deed restriction, with payment required no later than Monday, Jan. 16, 2017.

The school district demolishes the high school with little notice to the community.

The Zora Neale Hurston National Museum of Fine Arts is awarded a $50,000 grant from the Southern Poverty Law Center.

June 8: The deed release is executed, removing the restriction from the Hungerford property that provided it was only to be used for the education of Black children. A purchase and sale agreement is in place, with a proposed sale on Oct. 26 to a group of developers. The school district votes to extend the closing date for an additional 90 days to allow time to secure required land use entitlements from the Town of Eatonville.

September: The town votes on zoning changes to facilitate the sale at a first hearing in this month. Two hearings are required under Florida law. The second hearing has not yet been scheduled as the zoning proposals are under review by various state agencies. The mayor of the town is holding a series of community meetings on the project.

November 29: The next community meeting about the zoning changes is scheduled on this date, from 6 p.m. to 7 p.m., at the Eatonville Public Library Branch.

Picture at Top: The Hungerford property in Eatonville, Florida, in the 1940s. (Courtesy of the Association to Preserve the Eatonville Community)