Oath Keepers leader Stewart Rhodes and group member Kelly Meggs were convicted this week of seditious conspiracy for helping to plan and perpetrate the deadly insurrection at the U.S. Capitol on Jan. 6, 2021.

Other group members, including Thomas Caldwell, Kenneth Harrelson and Jessica Watkins, were found guilty of various other felony charges.

Yesterday’s historic verdicts of seditious conspiracy bring us one step closer to holding these individuals accountable for their actions.

Through their planning and actions on that day, members of the Oath Keepers organization, led by Rhodes, acted as a violent vanguard to direct the energy of other protesters into attacking the Capitol and disrupting the transfer of presidential power – by force.

While the Oath Keepers are one of the most notorious far-right, antigovernment groups to ever exist in the U.S., they are just one example in a long history of these groups that use hate and antigovernment conspiracy theories to threaten our democracy and harm our communities.

The SPLC has repeatedly warned of the threat to our communities from antigovernment groups, from the racist and antisemitic roots of the antigovernment movement to their violent history marked by incidents like the Oklahoma City bombing.

What’s more, the SPLC has repeatedly warned that Rhodes and many of his followers were a threat to communities across the country, given their stated intentions to undermine our democratic institutions and U.S. democracy as a whole. 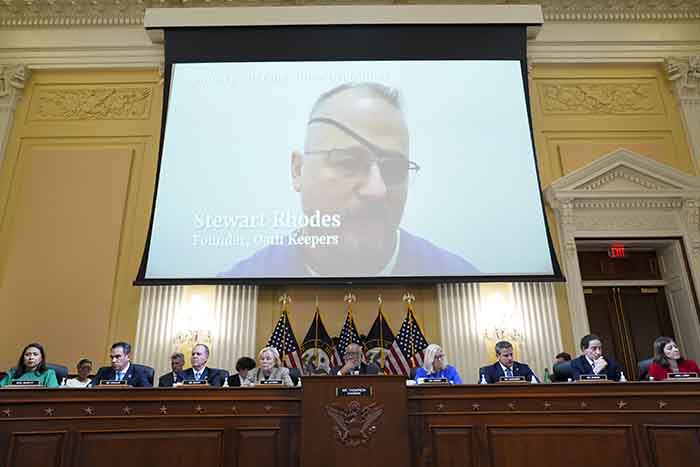 A video of Oath Keepers leader Stewart Rhodes speaking is shown at a June 9, 2022, hearing of the U.S. House select committee investigating the Jan. 6 insurrection in Washington. (AP Images/Andrew Harnik)

Oath Keepers previously worked to interfere with elections and, before the charges related to Jan. 6, at least four Oath Keepers had been convicted of crimes ranging from stockpiling bombs to threatening public officials.

The group consistently recruits from law enforcement, first responders and military veterans in an attempt to legitimize its activities, but the events of Jan. 6 and these convictions send a resounding message that the group is neither legitimate nor peaceful, and the violent activities that often characterize the hard-right antigovernment movement will not be tolerated.

We applaud the U.S. Department of Justice for its successful prosecution.

While yesterday’s verdicts provide some accountability, the SPLC will continue to press for consequences for the others who planned and perpetrated the insurrection and those who inspired and funded their violent activities and the campaign to steal the presidency.

Picture at top: This artist sketch depicts the trial of Oath Keepers leader Stewart Rhodes, left, as he testifies in Washington, Nov. 7, 2022, before U.S. District Judge Amit Mehta on charges of seditious conspiracy in the Jan. 6, 2021, attack on the U.S. Capitol. (Dana Verkouteren via AP Images)