The plan was for everyone carrying a gun into the chambers of the Washington House gallery on Saturday to get arrested — an antigovernment act of civil disobedience to call attention to the state’s new gun control law. But as the crowd of about 50 antigovernment gun owners gathered in the drizzle, waiting for the right moment to go it, the plan hit a snag.

The legislature was not in session. The governor was gone. The House gallery was closed and the doors to it locked. In other words, there was nothing there that the gun owners — who toted a variety of weapons to the protest — could do as an act of civil disobedience to protest a ban on citizens bringing weapons in the state House and Senate chambers.

“What’s the world coming to when there are people who want to break the law and they won’t let you do it?” Dave Grenier, 58, of Tumwater, a protest participant, told the Associated Press.

Organizers had advertised the protest as an act defying the legislature’s attempts to keep people from brandishing weapons in the chambers of the House and Senate. It was the latest in a series of protests that began in December after Washington voters approved Initiative 594, which required background checks on most gun sales. After protests erupted over that issue, legislators approved measures prohibiting guns from being displayed in both the House and Senate galleries, and banned them from all legislative hearings in the Capitol, as well. The law does not, however, affect people with concealed carry permits.

The gun owners organized Saturday’s rally to protest those new rules, and promotional posts about the gathering warned that gun owners planned on being arrested. But, it seems, the protest might have been a failure in the making.

“We informed them beforehand that the doors are normally locked on Saturdays,” said Robert Calkins, spokesman for the Washington State Patrol, which had a number of officers on hand on Saturday. “That did not seem to affect their plans, though."

Despite knowing the outcome in advance, organizers did little to hide their dismay. How could they possibly perform an act of civil disobedience if the doors were locked?

“It is unacceptable that the WA state gov locked the people out of our own house gallery,” organizer Sam Wilson tweeted.

The protest went on, however. The day was drizzly and breezy, but by the official start time — an hour before Capitol doors opened — about 50 would-be participants had gathered. Most of them had some kind of long arm strapped to their back. Some had children in tow. 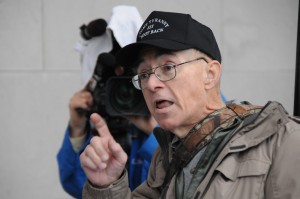 They spent the hour listening to speeches from various antigovernment luminaries, including “III Percent” movement co-founder Mike Vanderboegh, and a couple of far-right state legislators. Washington Reps. Elizabeth Scott of Monroe and Matt Shea of Spokane Valley touted the need for individual gun ownership and their evident belief that the Second Amendment gives people an absolute right to own weapons. They both referred repeatedly to the “tyranny” of I-594.

In his main speech, the text of which he posted at his blog, he painted the gathering as a historic instance of patriotism.

“We see here today on this miserable winter day in Olympia Washington — so seemingly distant from the struggles of the Founders in 1775 yet so very, eerily, close — that the Founders were right,” Vanderboegh said. “Tyranny can be voted in by a majority as it was with I5-94. Tyranny can also come from a duly-elected parliament or state legislature. The test for us is – do we submit? Or will we resist?"

Shortly after the Capitol doors opened, the protesters began making their way up the marble stairs to the gallery. However, the crowd stopped moving when the first protesters hit the locked doors, and much of the gathering waited in the stairway. Among them was Vanderboegh, who told the people gathered on the stairs: “They count this as a victory. But they have lost. They just don’t know it yet."