The American Freedom Party (AFP) has a ticket for the 2016 presidential election. And its message is The Mantra.

Kenn Gividen of Indiana, a former Libertarian candidate for governor of Indiana in 2004, will run for president, while Robert Whitaker, an aging segregationist with a history of drug abuse, will run for vice president. The announcement was made on Jamie Kelso’s Stormfront radio program on Sunday.

Despite the bizarre reality that Gividen and Whitaker claim they will run separate campaigns, the ticket has already excited the racist right, in no small part because of Whitaker’s role in drafting The Mantra.

A 221-word attack on multiculturalism peppered with cries of "white genocide," The Mantra has grown wildly popular on the racist right, with sections appearing on banners hanging from Interstate overpasses and on billboards. Even Craig Cobb, who tried to take over a small North Dakota town several years ago, painted it on his house.

Undoubtedly, that fame has helped drive AFP’s decision to pick Whitaker as a candidate.

A self-professed “genius,” Whitaker has a history in politics, though a dubious one. While he claims on his blog to have been the message man in the Reagan administration responsible for crushing communism, bringing down the Berlin Wall and saving the Hubble Space Telescope, Whitaker is closer to a hard-drinking grandfatherly Forest Gump. He once claimed to have an amphetamine habit that dropped his IQ to 100.

“I’m running for vice president because I know a lot about vice,” Whitaker said in an audio interview about his candidacy posted to his Website.

His bumbling demeanor aside, Whitaker's intended candidacy has already generated widespread excitement in white supremacist circles, with many pledging their full support to Whitaker and his followers, who refer to themselves individually as “BUGSERS” and collectively as the “SWARM.”

“With Bob at the helm and his hardened foot soldiers willing to Work [sic], this new playing field is a great opportunity to bring our White Genocide message to new heights,” wrote a user identified as Laura on Whitaker’s website. “Coach, you’re not alone anymore, You [sic] have a whole cavalry with you now.”

In his interview, Whitaker wasn’t sure if what he was doing was even legal in some states, and he told his interviewer several times that they could visit “library information services” at a local college in Columbia, S.C. to find out if it was. “Unless we want to look it up on the Kindle,” Whitaker added.

Although Whitaker and AFP both share white nationalist views, they have never worked together this closely before.

Gividen recently joined AFP’s leadership as a director. His personal website, DailyKenn.com, focuses heavily on discussing black-on-white crime, writing articles such as “Black History They Don’t Want You To Know.” In that article, Gividen states that beating black slaves in the South was “extremely uncommon,” along with a litany of revisionist history surrounding the antebellum South.

But Gividen is perfectly clear about his own racist positions. “Of course I’m pro-White. And you should also be as well.” His website includes links to videos of well-known white nationalists such as Jared Taylor and Virginia Abernathy, who was AFP’s vice presidential candidate in 2012 alongside presidential candidate, Merlin Miller, a filmmaker with a well-documented history of anti-Semitic and white supremacist views. The pair received only 2,307 votes with ballot access in Colorado, New Jersey, and Tennessee.

The Gividen-Whitaker ticket, however, marks a significant change in the profile the party is seeking to project. Gividen has fared poorly in his own campaigns, but he has some experience. Coupled with Whitaker’s proven ability to mobilize a somewhat sizeable, grassroots base, the ticket represents a disconcerting reminder of how popular the Mantra has become.

As Stormfront Radio host “TruckRoy” told “Laura” after Whitaker’s announcement, “This candidacy could be huge for the Mantra.” 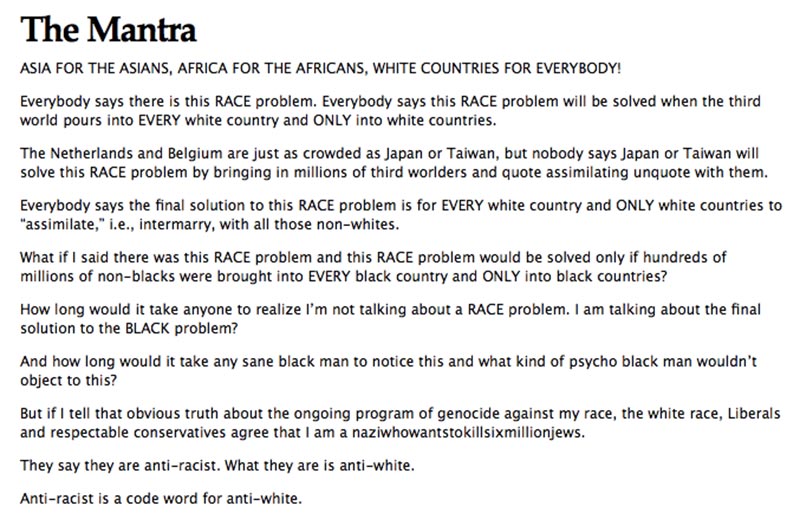