The white nationalist National Policy Institute (NPI) conference in Washington, D.C, this past weekend had a familiar lineup of speakers, but NPI head Richard Spencer’s event turned out to be far different from your average radical right gathering. Spencer, a relatively young racist activist himself, was able to do something many similar groups have failed to do—attract lots of young people to his event.

And he did something else white nationalists aren’t known for: Spencer made it clear that anti-LGBT voices would not be invited. Every other kind of extremism, and in particular anti-Semitism, was perfectly welcome.

Before the event, Spencer took steps to attract as many young racists as possible, including offering a hefty discount for those under 30 (something he’s done before). He also stipulated that only first names would be on the nametags worn at his conference, thus relieving fears of exposure. 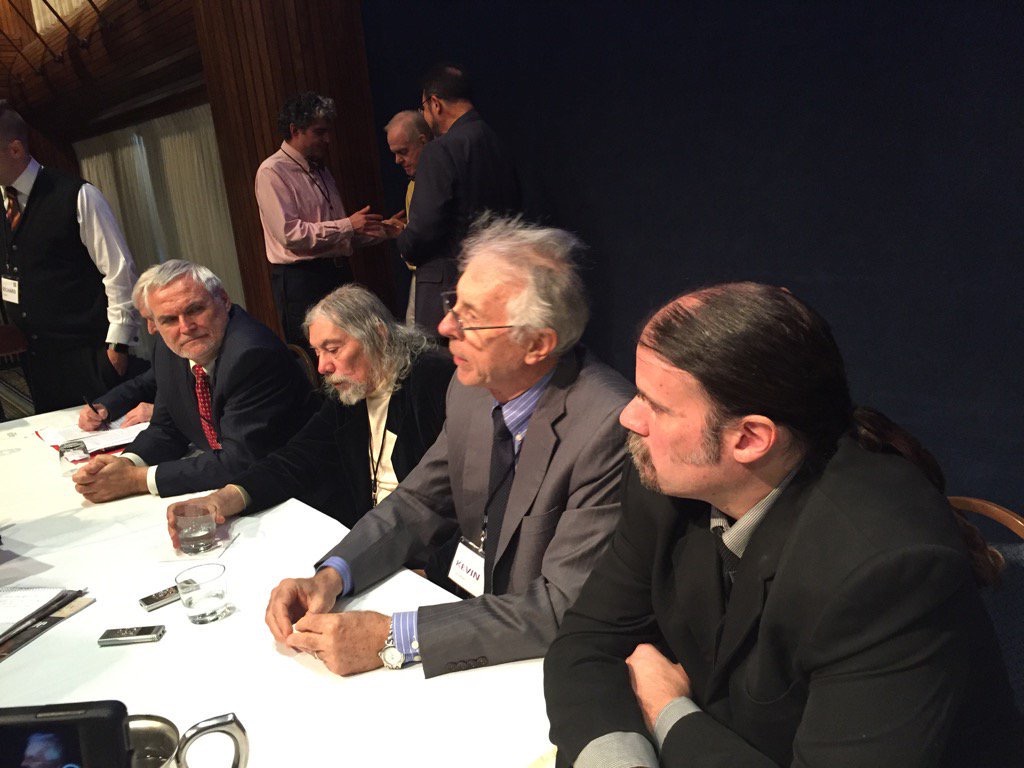 As the conference began, Spencer encouraged the crowd to take to Twitter during the event using the hashtag #becomewhoweare and attendees duly obliged, posting pictures and quotes from some of the speeches. After lunch, NPI Director William Regnery asked all of the participants under the age of 30 to gather in an adjacent room to take a photograph for fundraising purposes. About half of the crowd of 120 heeded Regnery’s call.

Anti-Semitism was widely accepted at the NPI event this year, something that was not necessarily the case at its February 2015 and October 2013 gatherings. The anti-Semitic tabloid American Free Press had a booth at the event staffed by John Friend, a younger anti-Semite who runs the website and radio show The Realist Report. Brochures for AFP’s sister publication, The Barnes Review (TBR), were also distributed by Friend at the event. TBR is America’s leading Holocaust-denial journal.

The anti-Semitism did not stop there. Before his full remarks, longtime racist Sam Dickson was asked by Richard Spencer to say a few words about Willis Carto, the anti-Semite who founded TBR and was active on the radical right for 60 years before his death late last month.

Dickson sang Carto’s praises, calling him “the foundation,” and went on to say, “It is incalculable the number of people that he put together and this group would not exist today, I suspect, if it were not for Willis Carto.” Dickson ended his remarks by asking the crowd to give thanks for Carto’s “commitment to our race.”

Anti-Semites were welcomed to the NPI event, but in a move not normal in these circles, anti-gay voices were kept away. White nationalist Matthew Heimbach of the Traditionalist Youth Network (TYN) was disinvited. According to his close friend Scott Terry, Heimbach was “booted” from the NPI conference for his anti-gay views. While Heimbach was kept at bay, Jack Donovan, an openly gay white nationalist, served as one of the key speakers.

In the middle of the conference, Spencer penciled in a live podcast with three other younger white nationalist radio/podcast personalities: Mike Enoch from The Right Stuff blog, as well as husband and wife duo Henrick Palmgren and Lana Lokteff, both of the white nationalist media group Red Ice Creations, based in Gothenburg, Sweden. Though live-broadcasting from racist events is nothing new, the participants were all young.

In an effort to draw publicity to the event, Spencer held a press conference, taking a page out of the David Duke playbook, inviting a half-dozen journalists into the conference room at the National Press Club to pitch questions to a number of speakers including Spencer, and fellow white nationalists Sam Dickson and Keith Preston, as well as Frenchman and NPI keynote speaker Guillaume Faye and musician Robert Taylor. The interviewees didn’t hold back, as articles in the Huffington Post and The Daily Beast revealed. Dickson claimed African Americans could “be given Manhattan” describing his version of a Balkanization of America. Spencer spouted some anti-Semitism himself, before trying to retract it, stating, “The Jews exist precisely because they were apart, precisely because they had, maybe you could say, a bit of paranoia about trying to stay away -- please don’t quote paranoia.”

The speeches were full of the same white nationalist tropes such as opposition to immigration and lamenting the “apathy” of fellow whites in America and Europe who “refuse” to combat multiculturalism. Many of the speeches were more uplifting, clearly a ploy by the event organizers, thus turning the event into something resembling a white nationalist pep rally. Spencer’s speech pumped up the crowd as he told, for the umpteenth time, the story of his imprisonment and deportation from Hungary in 2014 for attempting to host a white nationalist gathering in the Hungarian capital.

The evening session certainly resembled a pep rally, with Spencer again riling the crowd, now buoyed by alcohol and the prospect of a speech by Jack Donovan. Spencer had the crowd rolling with laughter during his introduction of Donovan, exclaiming that he was so happy to be at the Press Club with “so many fellow c---servatives.” He then joked, lamely, that he couldn’t say for much of the night because he had to help his wife tuck in their two “adopted Haitian babies” named “Snowflake” and “Jamal.”

Donovan, like Spencer, is part of the white nationalist leadership that college-aged males are looking up to, perhaps because they attempt to be “cool” and “edgy.” Donovan waltzed around a room that was distinctly not like one organized for a racist gathering – gone were most of the tables and chairs and in their place was open space where the younger attendees formed a semi-ring around the speaker, while most of the older crowd sat at the back.

Donovan’s impassioned speech gave young people tips on how to “become a barbarian” – the title of his forthcoming book. He also provided a number of rules for barbarians, including not shedding any tears or spending time thinking about or trying to convince people who are not adhering to the white nationalist cause. Another of Donovan’s rules was to “loot and plunder,” meaning use technology and “everything that the modern world has to offer to you and repurpose it,” to advance the white nationalist cause.

While familiar younger white nationalists such as Patrick Sharp, Devin Saucier, Dan Poole and Evan Thomas were all in attendance, it appeared the majority were new recruits to the cause. As Spencer told a reporter from The Daily Beast, “Before, I felt like I knew everyone in the room,” but now [I] “can’t keep up with it.” Though most of the young attendees at Spencer’s event clearly live in fear of being exposed for being racist, it is clear that Spencer is making headway in cultivating a social space, whether that be in real life or online, for these individuals, regardless of their sexual orientation.