Though traditionally anti-LGBT, some white nationalists seem to be engaging in some rainbow coalition building.

White nationalists are not traditionally known for their acceptance of LGBT people. However, in the wake of gains made for LGBT rights, the passage of same-sex marriage in the U.S. last year, and the rise of a younger, anti-establishment, racist movement called the “Alt-Right,” some have extended a rainbow handshake to new bedfellows.

White nationalist Kyle Rogers, a leader and former Webmaster for the racist hate group the Council of Conservative Citizens (CCC), is just one example.

Rogers came into the public eye in the wake of controversy following the discovery of Dylan Roof’s manifesto, which cited CCC as Roof’s initial brush with white supremacy. Rogers, who as Webmaster shifted the site towards a narrative of alleged “black-on-white crime,” was forced to step down. He retained his position on CCC’s national board, however, and currently heads the South Carolina chapter.

Rogers has also been able to turn a profit by peddling racist apparel, flags and organizational materials (such as uniforms) to other hate groups through his website, Patriotic Flags. At first glance, the site appears like any other vendor of shirts emblazoned with the Nazi Black Sun Wheel, flags from Apartheid-era South Africa and Rhodesia (similar to the flag Roof posed with before killing nine black parishioners in South Carolina), and patches advertising groups ranging from the anti-government 3 Percenters’ militia to the neo-Confederate League of the South (LOS), which advocates a second Southern secession and a Christian theocratic state run by white “Anglo-Celts” and for which Rogers is the sole contractor.

But in a section marked “Peace,” Rogers sells variations on the Rainbow Pride Flag, an LGBT symbol that came to prominence during the civil rights movement.

That’s quite the paradox for a neo-Nazi white nationalist who generally sells uniforms to racist organizations like the anti-LGBT League of the South. Earlier this summer, the LOS – which buys its uniforms from Rogers -- turned out in protest of Montgomery, Alabama’s annual Pride festival, holding anti-LGBT signs and shouting “God Hates F---!”

Following the shooting deaths of 49 people at an LGBT club in Orlando, Fla., some white nationalists saw an opportunity to prey upon fear within the LGBT community to foment Islamophobia.

Within days of the shooting, posters combining the LGBT rainbow flag with the rattlesnake logo from the “Don’t Tread on Me” Gadsden Flag (most often associated with Tea Party adherents these days) popped up all over Hollywood, urging the gay community to “Shoot Back”. 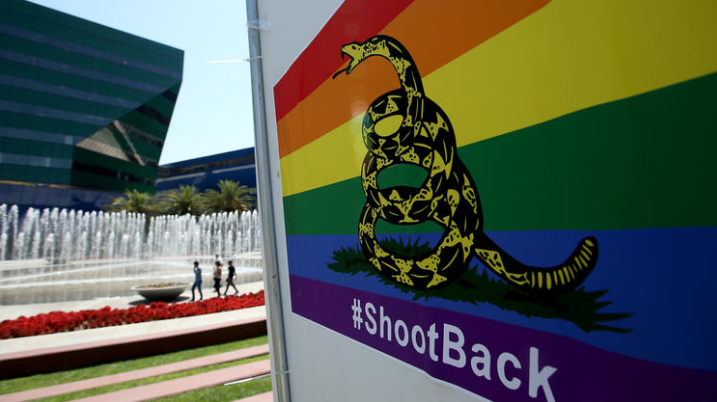 Street artist Sabo and his collective Unsavory Agents claimed responsibility, despite having gained some notoriety earlier this year for anti-LGBT, anti-Muslim posters boasting slogans such as “MUHAMMAD IS A HOMO” and “WHITE POWER”. After Orlando, though, Sabo seemed to waste no time encouraging gay people to go after Muslims.

But nowhere has this shift towards incorporating the LGBT community into Islamophobic, white nationalism been more obvious than in the “Alt Right,” a set of far-right ideologies, groups and individuals whose core belief is that “white identity” is somehow “under attack” from “multiculturalism” and “political correctness.”

Richard Spencer, president of the white-nationalist National Policy Institute who is considered one of the founders of the Alt Right movement, has also made overtures toward LGBT people, explicitly barring homophobes from the organization’s annual conference in 2015. Matthew Heimbach of the Traditionalist Youth Network (TYN) was reportedly disinvited from the event for his anti-gay views, while Jack Donovan, an openly gay Alt-Right author, was a key speaker.

Recently, Spencer participated in an online “Ask Me Anything” session on Reddit. One user seemed to think that Spencer has a “large following in the gay community” and asked him how he felt about that. Spencer responded succinctly: “The gays love me.”

“My view is that White Nationalism should be ‘straight but not narrow,’ meaning that we should uphold and defend heterosexuality as the norm but also recognize that not everyone fits that norm,” Johnson wrote. “As long as homosexuals uphold healthy norms and have something positive to contribute, they can and do make our movement stronger.”

While it is unclear how significant LGBT white nationalists are within the movement, one thing is for sure. In the wake of the legalization of same-sex marriage and greater equality for LGBT people, the far right is grappling with how to deal with the so-called “Homosexual Question,” a strange position to be in, given the right’s history of extreme homophobia.