One of the major findings in the Anti-Defamation League’s study of anti-Semitic harassment against Jewish journalists on Twitter is how big an impact can be made by a dedicated few racists and trolls.

Of the 19,253 tweets directed at journalists examined by the ADL, 68 percent were sent by just 1,600 accounts in a universe of over 300 million total accounts. Those accounts disproportionately are comprised of adherents to what’s become known as the Alt-Right. 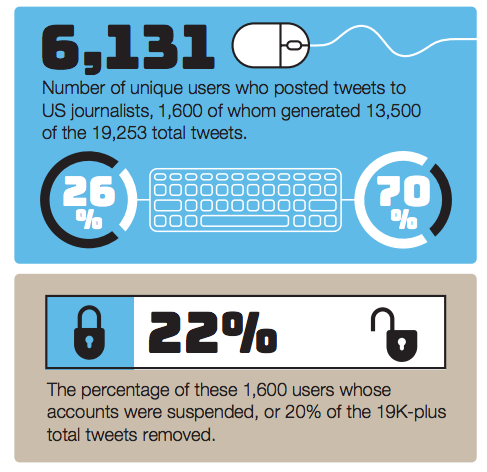 From the Anti-Defamation League's report on anti-Semitic harrassment on Twitter.

It’s an asymmetric battle being waged by small racist online communities that has succeeded beyond their wildest dreams, seeding racist themes into popular culture and political discussions with occasional boosts from the Trump campaign. This dynamic is all the more troubling, and not just for Twitter’s reputation, given that a number of hate group leaders are broadcasting in plain sight on the platform.

While Twitter insists that it polices conduct and not content, the ADL report adds further confirmation that the company fails to ban abusive accounts. And while policing hate content would be an even bigger undertaking, it’s clear that organized hate groups and leaders, who may not engage in the prohibited but under-enforced harassment themselves, consider Twitter one of the best ways to get their racist messaging out.

Jared Taylor. 18,300 followers. Longtime editor of the white nationalist publication American Renaissance, which also has a Twitter account, and go-to crisis PR man for the Council of Conservative Citizens.

Stormfront. 3,134 followers. One of the most influential and violent online white supremacist communities.

Andrew Auernheimer aka “weev.” 34,800 followers. Neo-Nazi millennial and contributor to the Daily Stormer.

To be fair, many of the above use their Twitter accounts much like an RSS feed. A steady drip of links and commentary and not the days-long harassment campaigns that brought down major Alt-Right accounts like @Nero (Milo Yiannopoulos) and @Ricky_Vaughn99.

Auernheimer is a more interesting case. His trail of harassment and abuse is well documented. His collaborator, Andrew Anglin, was banned from Twitter following his campaign to troll the University of Missouri protests, and as the ADL rightly pointed out, Anglin’s Daily Stormer is the place from which so much harassment springs.

Bannings, despite their infrequency, are a serious concern for leaders of the radical right. Richard Spencer, the de facto leader of the Alt-Right believes that Twitter is critical to his work.

“People are much more likely to be reached on Twitter than they are to go visit a website or blog,” Spencer told @Ricky_Vaughn99 earlier this year on his Radix Podcast. “I don’t even think anyone knows what we can do once we start getting kicked off platforms like Facebook or Twitter or YouTube or Amazon. We’re in a whole new world because that is so much worse than being censored by a government.”

For now, it appears that Spencer and his colleagues in organized racism have little to fear as Twitter continues to underestimate its hate speech and harassment problem.