This is the final post in a six part Hatewatch series examining the Newslinks & Articles section of Stormfront.org. Until last summer, Stormfront was the most trafficked white supremacist website online.

An investigation into posting themes in Stormfront’s Newslinks & Articles section reveals that discussions in the forum’s threads are clustered and include notable outliers around issues like race and anti-Semitism. 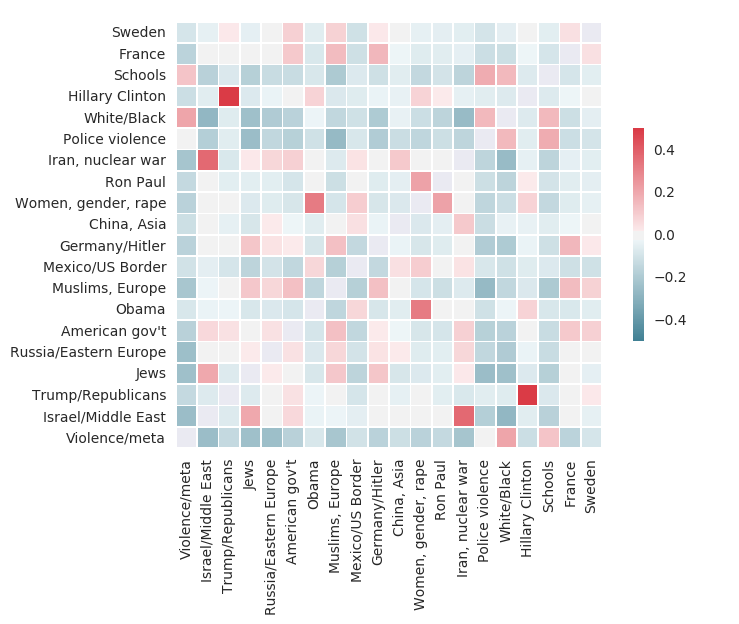 Hatewatch ran a topic model across the threads on Stormfront, determining a set of 20 common topics of discussion. Topics are defined by common words. The heat map uses the correlation between topics to show how much overlap there is in discussion.

A list of top terms for each category as well as top threads can be found here.

Threads involving black and white race relations were significantly more likely to post about violence (represented by “Violence/meta”), as well as police violence and schools—topics that frequently come up in the context of large cities, like Chicago, that suffer from violence epidemics, as well as troubled school systems and police precincts. As previous analysis of the site shows, Illinois and New York—states with large urban centers—are mentioned alongside black ethnicity more frequently than any other states in the country.

Discussions about race relations (such as “White/Black” or “Police violence”, which is frequently discussed in the context of race) do not often overlap with discussions about Jews, an obvious obsession of the large anti-Semitic population of Stormfront, which shows that distinct—and potentially independent—strands of hatred exist on the forum.

Topics related to race were negatively correlated with Israel, however, which is frequently leveraged as an example of mainstream hypocrisy by white nationalists in arguments for establishing of a white ethnostate. This suggests a divide when it comes to anti-Semitism—a longstanding feature of white nationalism that has resulted in public spats among movement leaders and Stormfront celebrities, like David Duke—on the forum.

Islamophobia, on Stormfront, dominates threads related to Europe. Mentions of Sweden, France, Germany, Russia, and Eastern Europe all correlate strongly with discussions of Muslims, despite the Newslinks & Articles section being dominated by American posters. This is likely the result of xenophobic coverage of the ongoing migrant crisis that is often framed as an “invasion” by members of the radical right.