Thirsty for battle with their leftist foes, the closest the heavily-armed Islam-hatin’ crowd came to conflict this past Saturday during an anti-Sharia rally in Phoenix’s Paradise Valley Park was when an unidentified man in a blue golf shirt walked toward the large patch of grass they occupied.

Armed only with a Styrofoam Pepsi cup, the man claimed to be Native American and ordered the assembled to “Go back to Europe with your hate,” calling them, at one point, “Ellis Island parasites.”

As can be seen in various YouTube videos of the event, plain-clothed officers with the Phoenix Police Department blocked the man from getting too close to a perimeter established by a string of yellow caution tape.

That tape encircled an area where more than 200 demonstrators had gathered for the Phoenix version of ACT for America’s nationwide March Against Sharia, one of 28 scheduled for June 10.

Members of Based Stickmen AZ, armed mainly with sticks draped with the American flag, and their allies, the Arizona Proud Boys stepped past the yellow tape, as did some in the AR-15-totin’ Arizona Liberty Guard militia, which was doing security for the event.

Crowd members taunted their sole ideological opponent for the day, calling him “chickenshit,” and telling him, “You’re really cute when you’re angry!”

Just as things began to teeter out of hand, a uniformed Phoenix cop warned both sides that he would trespass anyone who continued to disturb the peace.

Eventually, the man walked away and the crowd pulled back, chanting “U.S.A., U.S.A.,” before breaking into a rendition of the ‘70s Steam hit, “Na Na, Hey Hey; Kiss Him Goodbye.”

At one point before leaving, the man had wondered aloud why he was the only one present opposing the hatefest.

Actually, there were others — about 100 others a half-mile away on the other end of the park, holding signs that read “Love for All,” with many wearing rainbow umbrella-hats to keep the sun from roasting them.

It was that half-mile distance that kept the peace. Several members of the left-wing John Brown Gun Club, in green shirts with their signature red kerchiefs tied around their necks, were at the peacenik shindig, ostensibly to protect it.  Unlike at other events the lefty militia has attended, they were not carrying long guns. 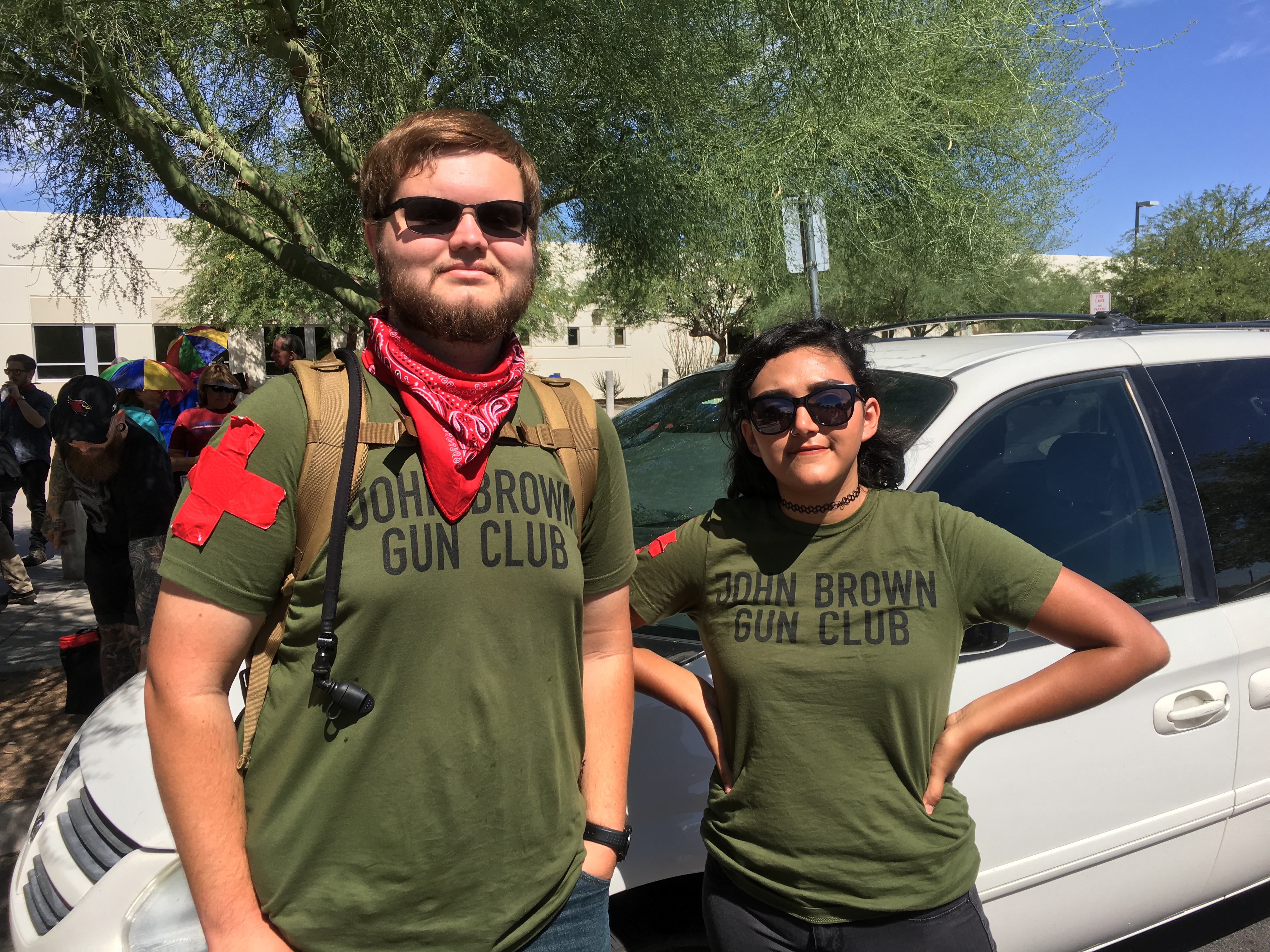 A Hatewatch reporter inquired of JBGC spokeswoman Fallon Leyba if her people were unarmed.

“Not necessarily,” she responded, cagily. “Definitely on the more subtle side.”

Asked if the JBGC planned to confront their counterparts in the Arizona Liberty Guard nearby, she replied in the negative, saying JBGC was present merely as security, with the permission of the counter-demonstration’s organizer, Democratic U.S. Senate Candidate Deedra Abboud.

A convert to Islam who is originally from Arkansas and speaks with a Southern accent, Abboud is an attorney and former director of the Arizona branch of the Council on American-Islamic Relations, also known as CAIR.

She said she organized the event, part of a national effort hashtagged “#CounterACTHate,” because she didn’t want others defining her religion for her.

“Muslims can’t even decide what all the guidance [from Sharia] is,” she explained to Hatewatch at the event. “So I don’t want anyone else tellin’ me what my religion is, including other Muslims.”

Abboud said she agreed to the JBGC’s presence because they offered to act as a human shield against any hostile forces.

She also explained that since she  announced her candidacy in April, one meet-and-greet she held at a local restaurant had been protested by alt-righters because she is Muslim.

But so far, other than online trolling, she said she had not received any threats elevated to a level where she felt the need to report them to law enforcement.

For the record, she stated that she supports the separation of mosque and state.

“I wear the scarf because I want to wear the scarf,” she said. “But I swear to you, if someone forced me to wear it, I’d be the first one to take it off in protest.”

Still, demonstrators at the ACT rally took a more black-and-white view of Sharia, Islam and Abboud herself.

Beneath the shade of a tree, where attendees sought to beat the 102-degree heat, one anti-Sharia speaker described the crowd as “Deedra-plorables,” calling Abboud, “an Islamist from CAIR.”

Lesa Antone, one of the rally’s organizers, took special offense at Abboud’s counter-demonstration and the fact that Abboud had blocked many of them from commenting on her social media sites.

“We really, really need to stay on top of her because she is no bueno,” Antone said, later adding, “She has to be stopped from getting a [Senate] seat in our state.”

Other attendees and speakers griped about Abboud being an “instigator” and pointed to her  former work for the Muslim advocacy group CAIR as evidence — in their minds — that Abboud somehow has ties to terrorism.

As for Sharia and Islam in general, both the speakers and the audience seemed agree that they were no bueno as well.

Antone summed up the message of the day, thus:

Sharia is incredibly complex and applied differently in many nations across the world. These varying Islamic religious laws and legal interpretations address numerous topics — everything from dietary restrictions and marriage to sexual conduct and piety.

In certain countries, more severe, fundamentalist interpretations of Sharia may mandate punishments as harsh as lashing or death.

But in Israel, for instance, there are Sharia courts, funded by the Israeli government, which issue rulings on religious and family matters for Muslim citizens.

Those at the rally, however, saw Sharia as a threat to American democracy, despite the U.S. Constitution’s prohibition on the government’s establishment of religion, making such fears seem paranoid in the extreme.

Speakers read printed statements describing child brides, honor killings and Female Genital Mutilation (FGM), all of which they said was sanctioned or imposed by Sharia.

Dr. Carl Goldberg, a self-taught anti-Islam lecturer who claims to have a PhD in European and Russian history, lectured the crowd on the “existential threats” that Islam poses to the United States.

One of these, he contended, was “mass Muslim immigration,” because Muslims “don’t assimilate,” and “bring with them all of the ideological baggage that Islam has.”

As for Islam itself, Goldberg opined that it was “a totalitarian and imperialist ideology,” which he said was “something like Communism, something like Nazi-sm.”

He also accused both of Arizona’s Republican U.S. Senators — Jeff Flake and John McCain — of being “on the side of the Muslim Brotherhood.”

Following his speech, Goldberg admitted to this reporter that he does not speak Arabic, but he insisted this was unimportant because he had made a complete study of Islamic religious texts translated into English and vetted by Islamic religious leaders.

He said he had also traveled to the Middle East, visited mosques and spoken with imams, all of which allows him to speak with authority on the subject.

Hatewatch asked Goldberg if he spoke Russian and if he believed an expert in Russian history, such as himself, should speak Russian.

“Oh, yes,” he replied, immune to the irony. “If you want to read the original documents, yes.”

Other speakers sometimes got downright emotional, offering intimate details of their personal histories.

Referring to a case in Michigan where two doctors and one other person — described by media there as being members of an Indian-Muslim sect — have been charged by federal authorities with performing FGM, which is illegal in the U.S., Antone said she believed that there are more doctors involved, but that they haven’t been caught yet.

“How many do you suppose are actually performing it?” she asked rhetorically. “Because you know, when I was drinking, I drank and drove for 10 years before I got a DUI.”

Another speaker, Joanne Selena Lopez Cervantez, a self-identified "transsexual" anti-illegal immigration activist, gave a stirring address, stating that she had done “so many things that go against every possible religion out there.”

She claimed that her dad was a pedophile, and though he didn’t molest her, this was why she strongly opposed Sharia.

“They are pedophiles,” she said, not making exactly clear whom “they” referred to.

Hatewatch contacted Cervantez via Facebook and asked if she meant, by her statement that all Muslims are pedophiles.

“This, I truly don’t know,” she wrote, claiming that she had read and seen accounts of “child brides” and “little boys dressed as dancing girls,” and that these were the basis for her statement during her speech.

Other rally-goers seemed to share a similarly nefarious perception of Islam and Sharia.

Demonstrators carried signs reading, “Protesters, why are you for Female Genital Mutilation?” and “Stop Sharia Law,” as well as “Rape-fugees Not Welcome.”

One man carried two handmade signs with photos of mutilated women and children, with a chart affixed to one that read “Sharia for Dummies.”

T-shirts ranged from one that stated, “You cannot coexist with people who want to kill you,” to “F--- Islam!” and “Proud Infidel.”

The last was worn by one of the “based stickmen” present, who said he objected to Sharia because he said it was anti-woman.

Nearby was a guy in a “Punch an Antifa” shirt who identified himself as a member of the Arizona Proud Boys, part of a national movement founded by comedian and Fox channel commentator Gavin McInnes.

What made him and his associates Proud Boys, Hatewatch wondered?

“We’re proud Western chauvinists and we will not apologize for creating the modern world,” he answered.

Another Proud Boy on hand explained that the group was “more a fraternity than anything,” and that they were pro-Second Amendment and pro-freedom of speech.

Their more militant “stickmen” pals were dressed outlandishly in capes made of Gadsden and German flags, wearing helmets that were affixed with stickers of the Confederate Stars and Bars and Pepe the Frog.

Many wore goggles and body armor of one sort or another. One particularly large, bearded stickman said he had just taken a lot of his gear off, because it didn’t seem like he needed it.

Asked why he wore it to begin with, he laughed:

“I bought all this shit, I might as well wear it once, man.”

Another stickman told Hatewatch that other then his flagpole, he had a gun, pepper spray and a knife beneath his clothing, just in case.

Add to such preparedness, the presence that day of some 20 or so Arizona Liberty Guard militiamen in fatigues with AR-15s, perhaps a dozen Oath Keepers bearing weapons, and a crowd armed to the teeth in right-to-carry Arizona, and the peace-and-love crowd was probably wise to keep its distance.

Hatewatch asked a stickman if he was disappointed that antifa didn’t show up so the two sides could throw down.