Following the debut of their Southern Defense Force (SDF) last week at a rally organized by the Traditionalist Worker’s Party (TWP) last week in Pikeville, Kentucky, Michael Hill and League of the South (LOS) members will join a growing protest in New Orleans over the city’s removal of Confederate-themed statues

Hill was photographed at the event with Ike Baker, who he named as the Kentucky SDF commander. Both were dressed in the League’s recently adopted public uniform: khaki cargo pants, black boots and a black polo with the “Southern Nationalist” Cushman Flag emblazoned across the chest. Hill, now in his 70s, used a cane. While there were photos of numerous individuals at the rally sporting AR-15s and shotguns, Hill and the other LOS SDF members do not appear to have been openly carrying firearms. 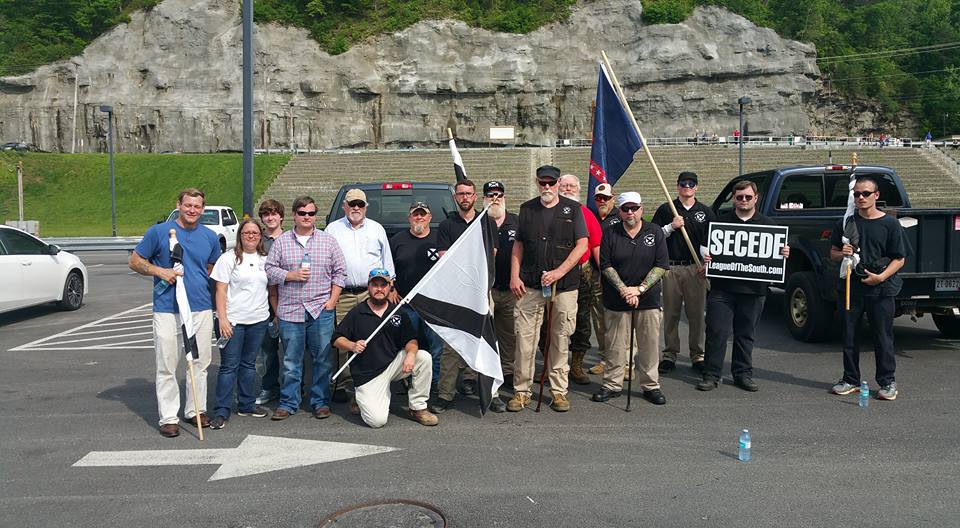 League of the South Southern Defense Force members pose for an “after-action” photo-op.

In a post titled “League of the South in Pikeville, Kentucky” Hill acknowledged that the League and their compatriots were largely outnumbered by peaceful protesters, although his phrasing and depiction of the day’s events differ slightly:

All the while, the cowardly Antifa had every chance to cross the barricades with a huge numerical advantage and actually do to us what they stood there threatening to do – destroy us. There was no way the cops could have prevented a sizable number of them from reaching us and closing quarters.

Since the announcement of the SDF, Hill has become part of a growing chorus on the right attempting to erase any distinctions between the demonstrators, “violent Antifas,” and passersby at public protests.

This week, news reports have centered around the growing tension in New Orleans as city workers attempt to take down Confederate monuments amidst backlash from various neo-Confederate sympathizers.

The League, which has touted the removal of Civil War monuments in public squares as proof of an accelerating program of “white genocide,” has sought to capitalize on the removal of Confederate iconography. This comes after a public outcry arose over the prominence of the banner and other revisionist appeals to the Lost Cause narrative of the Civil War and its heroes. In the process the League reversed a PR policy that was intended to distance the group from the controversial icons.

Two of the most prominent voices opposing the removal are Arlene Barnum and Andrew Duncomb, two African American neo-Confederate activists from Oklahoma who claim descent from Confederate veterans. Although Hill and the League typically denigrate “black Confederates” and their “Rainbow Confederate” ilk, they have been silent on the pair’s role in the protests, instead focusing their ire on the Sons of Confederate Veterans over allegations that the Commander of the Louisiana Division SCV ordered members to “stand down” and not protest the monument’s removal.

While it is unlikely that the situation in New Orleans will see Hill and the League join forces with black neo-Confederates, the event appears to have helped Hill mend his relationship with Brad Griffin, who has in the past criticized Hill’s paramilitary ambitions on his blog Occidental Dissent.

Griffin was present in Pikeville, although dressed in plain-clothes. This week Griffin, writing on “The Meaning of Pikeville” under the pen-name Hunter Wallace, stated “Now, I firmly believe that a Southern Defense Force is justified.” Hill shared that blog on the League of the South website.

Today, Griffin posted “The Battle of New Orleans,” stating “Nationalist groups are coming to New Orleans on May 7 and announcing his intent to counter-protest a demonstration at Lee Circle along with “Based Stickman” Kyle Chapman, Tim “Baked Alaska” Gionet AKA, the “Proud Boys,” and a host of others from the far right and “alt-right”.

This week, Hill and numerous others have taken to social media, asserting that the New Orleans Police Department is complicit in a conspiracy to aid and abet “Antifas” on orders from City Hall, as taken from this “directive” exhorting his followers to make their way to New Orleans:

A call to action

The League of the South encourages its members who are willing and able to be in New Orleans this weekend to show support for the Confederate monuments that the city has pledged to remove.

Below is some vital information regarding this developing situation:

The NOPD "stand down" order that we were told would be in force from now though the weekend is unlikely to be carried out. Our man on the ground says that the NOPD is actually there to protect Antifa and to see that the monument supporters have a hard time. Thus, you may face legal trouble for even trying to defend yourself from the opposition. Be aware of this.

3) That said, we encourage a League presence on Sunday at Lee Circle. We believe at this time that will be the main location for activity this weekend. Our folks who are interested in going to show support for keeping the monuments are advised to act as good and responsible representatives of the LS and to take orders from none but our own. At present, our N2, Tiny Malone, will be in charge of the LS contingent. Please give him your support and cooperation.

Our objective is to have an orderly presence and show support for our Southern inheritance. THIS WILL NOT BE A SOUTHERN DEFENSE FORCE EVENT. Rather, we will use standard LS demonstration protocol. Women and children are welcome. Standard LS demonstration dress and behavior will apply, as will flags, banners, and signs. We especially want LS SN black cross flags there!

Louisiana is an open carry State and is very friendly to concealed carry. If you intend to do either, please consult State and local law beforehand.

If you or anyone you know from The LS is going to NOLA, please let Tiny Malone (N2) know ASAP.

I will update this information once I hear from our man on the ground in NOLA. He is trying to work out logistics for our people who attend, including a staging point upon arrival.

It is unclear why Hill is deciding against naming this a “Southern Defense Force event,” given that the situation in New Orleans appears to fit the exact description of why he first announced the formation of the SDF. Recent events in Auburn, Alabama, close to the League’s headquarters also apparently failed to merit the distinction of “SDF event.”

Although one LOS member was arrested for brawling outside of Auburn University’s Foy Hall, the SDF were nowhere to be seen. The next weekend, Hill was able to travel hundreds of miles to Kentucky for Matt Heimbach’s rally.

In spite of Hill’s confidence that the SDF would “ …be ready to assist our local and State authorities in keeping the peace should they find it necessary to “deputize” private citizens for that purpose,” coordination between Kentucky law enforcement kept the LOS, TWP and National Socialist Movement (NSM) members separated from counter-demonstrators behind metal barriers, with no violent outbursts.

While Pikeville, a secluded, mostly-white town with no major cities nearby, was a fitting dry-run for Hill’s SDF, Hill recognizes that his members lack the coordination, resolve or discipline to function effectively in more diverse, cosmopolitan settings or to steer clear of criminal violence when push comes to shove. Whether they are operating under the SDF banner or not, the coming “Battle of New Orleans” will test restraint on both sides of the debate.