More than three years after cattle rancher Cliven Bundy, backed by heavily armed militias, stood down federal agents in Bunkerville, Nevada, the antigovernment movement has not forgotten that fateful day, especially as many of the defendants from the standoff are heading to trial.

In recent weeks, the murmur of anger and frustration over the federal government’s treatment of the Bundy family has grown into a loud chorus — from GOP political operative Roger Stone, a self-professed agent provocateur, to Larry Klayman, an attorney for the antigovernment movement — calling on President Trump to pardon those charged in the 2014 standoff.

That much was clear last weekend on the lawn of the U.S. Captiol, where about 100 people gathered Saturday for the Rally for America. While the event served to showcase complaints the radical right has fostered for decades, the rally seemed to have one focus. There were angry diatribes about the power of federal agencies from the Department of Education to the Federal Reserve, and a few speakers lauding President Trump for tamping down the forces of political correctness. But the event was dominated by the saga of the Bundy family and the federal government. 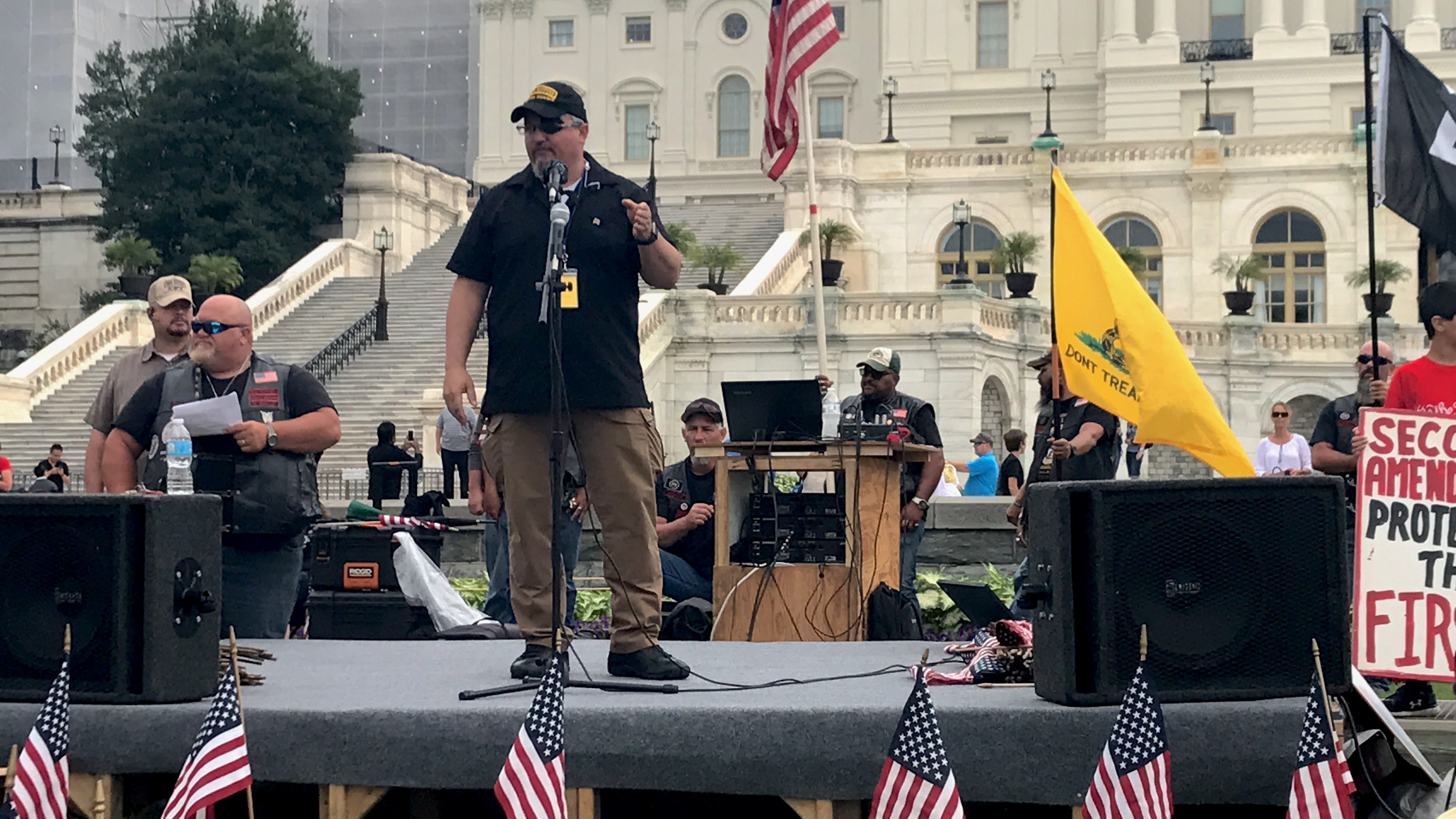 Stewart Rhodes, president of the Oath Keepers, addresses the Rally for America at the U.S. Capitol on July 29, 2017. (Hatewatch/Ryan Lenz)

“The persecutions and prosecutions that are going on right now in Nevada in the Bundy trial, or the continuations of [charges related to the Malheur National Wildlife Refuge] have to stop,” Stewart Rhodes, president of the Oath Keepers, one of the rally’s sponsors, said while calling on the White House to intervene. “It’s as though Hillary Clinton had won the election.”

As Bundy, his two sons Ammon and Ryan, and a host of supporters prepare to go to trial in Nevada on charges stemming from the April 12, 2014, standoff, Rhodes is not alone in expecting the president to intervene and help the Bundy family. Klayman, in fact, has argued that prosecuting the Bundy family shows the hand of the "deep state" at work in seeking retribution for racist comments made by the Bundy family patriarch.

While many Americans view the Bundys' standoff in Nevada as radical right extremism or domestic terrorism, an angry cohort that argues the Bundy family did nothing wrong has intensified efforts to put the Bunkerville standoff and the Oregon occupation in a narrative alongside Randy Weaver’s 1992 confrontation with federal agents in Ruby Ridge and the siege of the Branch Davidian compound in Waco, Texas a year later. These events inspired Timothy McVeigh’s bombing of the Alfred P. Murrah federal building in Oklahoma City in 1995 and continue to motivate the antigovernment movement today.

“All of us were worried,” Rhodes said of the events surrounding the standoff and later efforts to protect the Bundy family from the federal government, which abandoned its efforts to confiscate the Bundys' cattle as payment for more than $1 million in grazing fees and fines. “We had seen Waco. We had seen Ruby Ridge. We had seen the abuse of power, and we had seen federal law enforcement murder people. And we were not going to let that happen again. That’s why we were there.”

Putting the Bunkerville standoff and the Malheur occupation in that critical context is an effort that has been building on the radical right since January 2016, when FBI sharp shooters killed Malheur occupier Robert LaVoy Finicum after he charged a police roadblock, careened off the road into a snowbank and, while stumbling in the knee-deep drifts, appeared to reach for a pocket that contained a handgun. 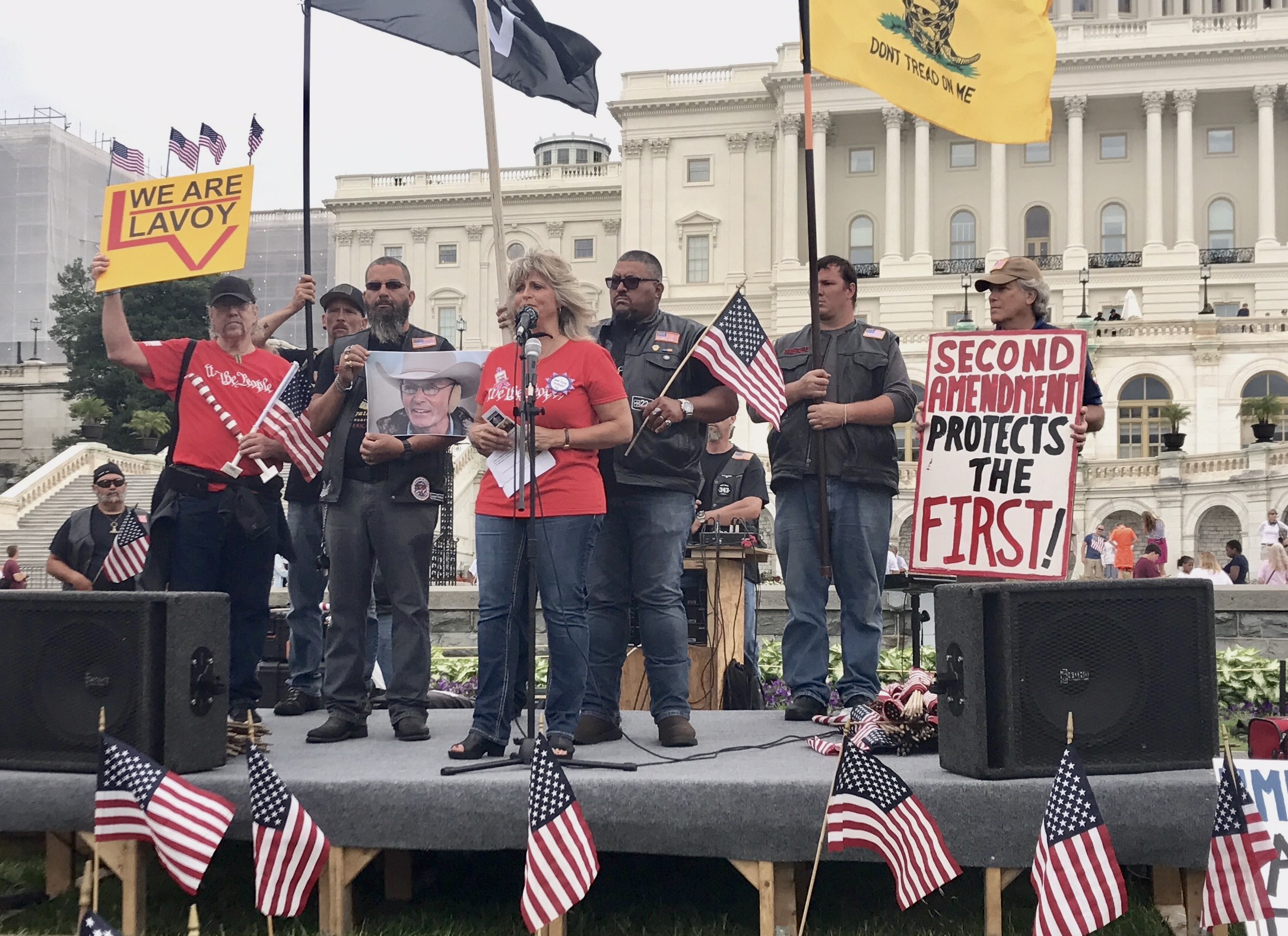 Jeanette Finicum, the wife of LaVoy Finicum, speaks at the Rally for America on July 29, 2017. (Hatewatch/Ryan Lenz)

Flanked by signs that read, “We are LaVoy,” flags with her husband’s cattle brand and the Gadsden “Don’t Tread on Me” flag, and choking back tears, Finicum said her husband was “murdered by our government during an illegal roadblock known as a kill stop with no warrant.”

As much as the rally was evidence that the antigovernment movement has not gone away in the era of Trump, it also served as a stark reminder of a movement that remains dangerous despite a public appearance of being assuaged by the adminstration’s attention to the radical right. As Rhodes, with the Capitol steps rising behind him to congressional offices where he once worked for Rand Paul, quickly reminded those at the rally, it doesn’t matter who holds the levers of power. What matters, Rhodes said, is that they understand the power of the people.

“If we had wanted to kill all those federal agents that day,” in Bunkerville, Rhodes said, “They’d be dead. The same goes for Malheur.”