UPDATE: In a statement on August 15, PayPal re-stated its commitment to enforcing its Acceptable Use Policy (AUP) and dropped many of the accounts Hatewatch reported on below.

The chaotic events of the day were quickly declared an unlawful assembly and, eventually, a state of emergency. The slated speakers never made it to the stage.

The event demonstrated an unprecedented level of planning and coordination among organized hate groups from across the far-right ideological spectrum. Representatives from groups often at odds with one another such as Vanguard America, Identity Evropa, League of the South, Traditionalist Worker Party, National Socialist Movement, and more gathered at Emancipation Park (formerly Lee Park) to protest the planned removal of a statue of Robert E. Lee.

PayPal, one of the world’s largest online payment processors, was integral in raising money to orchestrate the event. Organizers, speakers, and individual attendees relied on the platform to move funds in the run up to the ultimately deadly event.

Despite the company’s Acceptable Use Policy explicitly banning “the promotion of hate, violence, [and] racial intolerance,” the following organizers and attendees were allowed to utilize PayPal’s surface before and after the events in Charlottesville.

Jason Kessler organized the Charlottesville Unite the Right protest on the heels of a previous organized march and torchlit rally that garnered media attention after images emerged of white nationalists surrounding a statue of Robert E. Lee in Emancipation Park.

Although Kessler did not plan “Charlottesville 1.0,” he saw the event as the perfect opportunity to gain widespread attention for his one-man crusade against Charlottesville’s Vice-Mayor Wes Bellamy, who Kessler has decried as a “black racist.”

Kessler was central in the organization and coordination of the rally. After securing a permit for the event, Kessler attended several demonstrations in Charlottesville including one that resulted in his arrest for failure to obey an officer's commands. Kessler made the rounds on numerous far-right podcasts in order to hype his unity rally and to coordinate what would become the largest far-right gathering in over a decade.

Kessler utilized his PayPal, jason@unityandsecurity.org to secure funds for the event, including a planned after-party that was canceled when the venue was tipped off to the nature of the event. Refunds for that are scheduled to be made available through an account under the email address, CVilleRefunds@gmail.com.

Richard Spencer is one of the most public and prominent members of the racist Alt-Right, perhaps known best for his “exuberant” toast at last year’s National Policy Institute (NPI) gathering that resulted in stiff-armed salutes and an eruption of “Sieg Heils.”

Spencer operates a network of far-right publications, websites, and “think tanks” including NPI, AltRight.com — founded after he abdicated his role as editor of Radix Journal, a white nationalist blog — and the HL Mencken club, which Spencer was heavily involved in from its inception in 2008.

Spencer’s role in Charlottesville 1.0 generated immense press attention and controversy and was crucial in galvanizing support from the far-right for the second, deadly rally, where Spencer was given top-billing among its list of speakers.

He collects donations on PayPal with accounts tied to the National Policy Institute and AltRight.com. 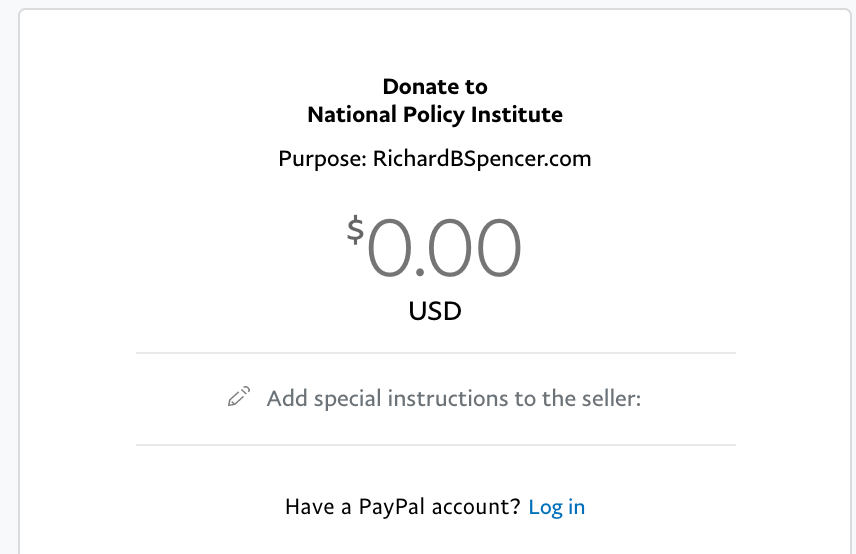 Nathan Damigo founded Identity Evropa in 2016. The group focuses its activism on college campuses including its signature campaign, “Operation Siege.” Known primarily for plastering white nationalist flyers and stickers on campuses and later publicizing their actions on social media, IE members were among the most visible in Charlottesville.

Damigo has become one of the most recognizable faces of the Alt-Right, frequently appearing alongside Richard Spencer — including in Spencer’s Monday press conference about the events that unfolded in Charlottesville. His profile rose significantly on the right after images surfaced of him punching a 95-pound antifa protester in the face during a rally in Berkeley, California, last April.

He was arrested during the Charlottesville event for refusing to vacate Emancipation Park following Virginia State Police declaring the assembly unlawful. 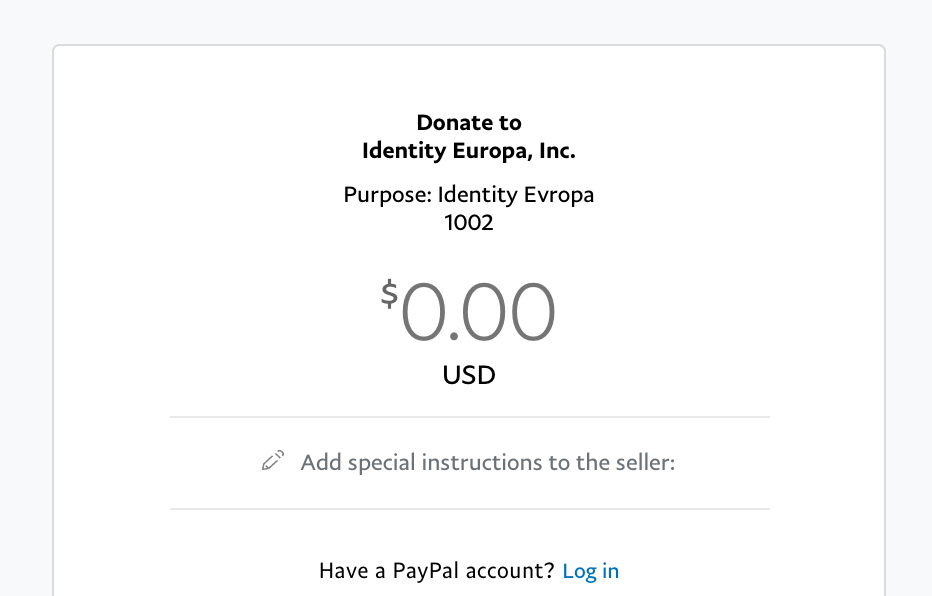 League of the South

The League of the South (LOS) is a militant secessionist neo-Confederate organization that has shifted from its 1994 founding as a soft engine of Lost Cause apologia started by a group of fringe academics to a virulently racist group intent on bringing about a second Civil War by capitalizing on racial strife in America.

Founder Michael Hill was slated to speak at the Unite the Right rally. Although he was unable to take the stage due to the state of emergency declared after fights broke out at Emancipation Park, Hill still found a platform for his views by leading the LOS’s “Southern Defense Force” through crowds of counter-protesters, brawling with anyone they encountered.

Members of the League were filmed punching a woman and dragging her rearward into their ranks to be set upon by multiple men and viciously beating a black man with sticks in a nearby parking garage.

Although the LOS was previously banned from PayPal, founder and president Michael Hill has circumvented this through the use of his own PayPal account, james.hill120651.

Michael Tubbs, the League’s chief of staff and Florida chairman, was among those filmed during the parking garage beating. His chapter collects funds through the account neflos@net-host.net.

Christopher Cantwell is the host of Radical Agenda, a podcast the far-right libertarian-turned-fascist hosts from his home-state of New Hampshire.

Cantwell has described his views as something he developed “between blackouts,” an amusing anecdote which belies the harsh escalation of racist rhetoric that Cantwell has exhibited after being removed from platform after platform for his increasingly caustic diatribes against blacks, jews, and “non-white immigrants.”

Cantwell has frequently advocated for violence on his show and exhibited a temperament that can only be described as volatile. Thus it came as no surprise when on Friday, August 11, the day before Unite the Right began, Cantwell was among those involved in a parking lot dispute at a Charlottesville-area WalMart where someone is reported to have pulled a gun.

Photography from the rally featured numerous shots of Cantwell brawling with counter-protesters. One now-infamous photograph shows Cantwell spraying a man in the face with pepper spray during a confrontation. 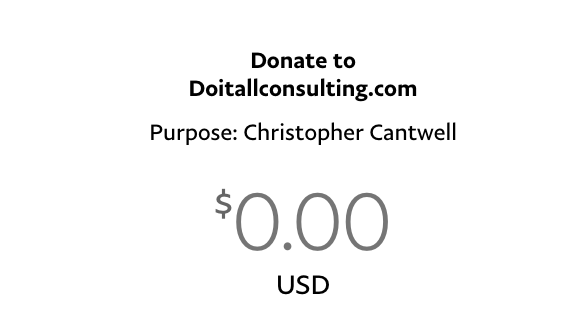 August Invictus (Austin Gillespie), a listed headliner at Unite The Right, has become a fixture on the Alt-Right speaking circuit. The former candidate for senate for the Florida Libertarian Party is best known for his botched slaughter of a goat and subsequently drinking its blood.

Invictus dabbles in academic racism, frequently referencing the intellectual inferiority of black people; violent misogyny; and anti-Muslim conspiracy theories, such as the existence of “no-go zones,” the widespread implementation of sharia law, and that there are roving gangs of Muslims attacking and raping white people. He has also refused to acknowledge that the Holocaust took place.

He is currently the Sergeant at Arms for the American Guard and second in command of the Fraternal Order of Alt-Knights, the most violent faction of Gavin McInnes’s Proud Boys.

His writings live at The Revolutionary Conservative where he collects PayPal donations under the email address, revcononline@gmail.com.

The Right Stuff (TRS) is a virulently anti-Semitic and racist website founded by Mike Peinovich in 2012 that hosts many of the Alt-Right’s most popular podcasts. It’s flagship program, The Daily Shoah, is one of the most influential programs on the far-right and one of the primary information distribution points for organized racism. Peinovich was a headliner at the Unite the Right event.

Among the site’s audience are the “TRS Confederates,” a group of TRS listeners and posters from southern states who set up their own affiliated website and podcast network, “Identity Dixie” as a PR maneuver in the wake of Peinovich’s doxing.

Having learned from Peinovich’s example, the hosts of many of the TRS affiliated podcasts attempt to avoid doxing by using pseudonyms, such as Musonius Rufus and Silas Reynolds of Identity Dixie.

Among the organizers of IdentityDixie's first real-life meeting are Michael Cushman, a former National Alliance member, and Brad Griffin, of Occidental Dissent.

The TRS Confederates’s flagship blog, “Rebel Yell” — described as a “southern nationalist podcast of the Alt-Right” — hosted Jason Kessler, Unite The Right’s organizer, on a segment of their show, and hosts podcasts by Kentucky LOS chairman Spencer Borum, who was seen viciously assaulting a woman during the rally.

Other podcasts on the site espouse far-right sentiments while promoting racist content from across the fringes of the far-right blogspace.

Individuals bearing a variant of the neo-Confederate “Southern Nationalist” flag emblazoned with Identity Dixie’s logo, a white magnolia flower, were present among members of the Nationalist Front, a coterie of far-right groups responsible for some of the most heinous violence in Charlottesville this weekend.

The TRS Confederates collect donations with a PayPal account linked to the email address, trsconfed@gmail.com. 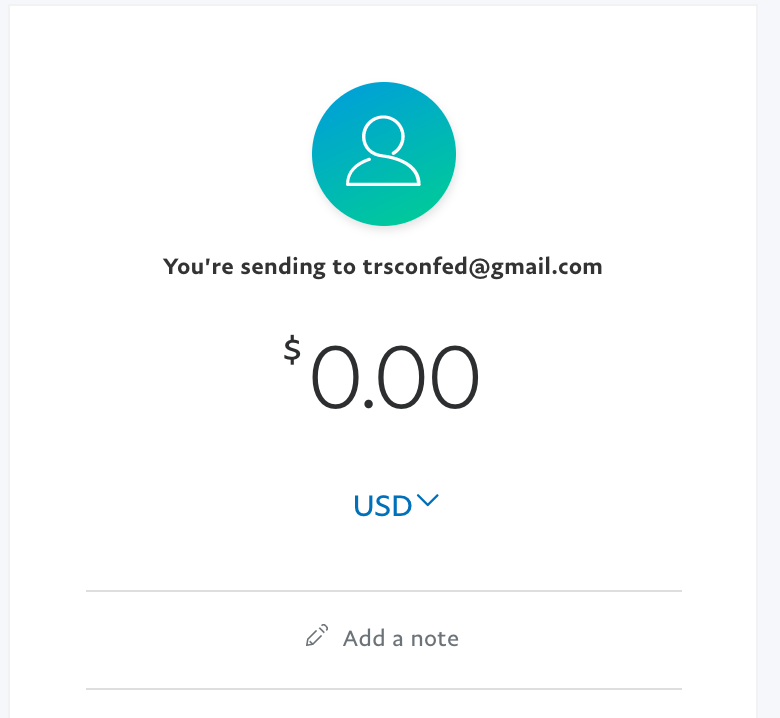 Patriotic Flags is an online merchandise retailer run by Kyle Rogers, a past-member of the LOS and the former web-master of the Council of Conservative Citizens (CofCC), a group cited by Dylann Roof as instrumental in his radicalization in a web-manifesto.

Rogers sells a variety of far-right flags and banners, including the neo-Confederate “Southern Nationalist” flag, the flag of Rhodesia — which Roof wore on his jacket in a widely circulated photograph — and various Confederate flags. The site features a photograph of Matthew Heimbach, one of the principle organizers and planned speakers at the Unite the Right rally, as its product illustration for one shirt.

Various other flags on display at Unite the Right are available on Rogers’ website.

Rogers is also apparently one of the primary vendors for sale of the official League of the South uniform shirt, a black polo emblazoned with the “Southern Nationalist” flag, which many members can be seen wearing in footage from the Charlottesville rally. Many LOS members plugged Rogers’ website in discussions about “building kit” for the rally.

Rogers himself bragged about purchasing three riot shields in the runup to the event and can be seen in footage from the rally.