On Tuesday, February 6, Maine State Rep. Heather Sirocki will host a public event to endorse a bill that would criminalize female genital mutilation (FGM) in the state.

In her attempts to promote the bill, Sirocki has recruited the help of a local chapter of ACT for America, the largest anti-Muslim hate group in the United States.

A series of emails obtained by the Southern Poverty Law Center document how Sirocki was not only in contact with the Norway, Maine, chapter of ACT for America, but also with ACT’s national office in an effort to garner support for her event, set to take place at the Hall of Flags at the capitol in Augusta.

ACT for America is run by Brigitte Gabriel, a woman who has spent the better part of a decade demonizing Muslims in the name of national security. In 2007, she stated, “Practicing Muslim who believes the word of the Koran to be the word of Allah … who goes to mosque and prays every Friday, who prays five times a day — this practicing Muslim, who believes in the teachings of the Koran, cannot be a loyal citizen of the United States.”

ACT works with elected officials to pass anti-Muslim legislation at the federal and state level. The organization is most known for promoting unnecessary and sometimes unconstitutional “anti-Sharia” legislation across the country.

ACT also lists state FGM bills as part of its legislative agenda although the abhorrent practice is already outlawed at the federal level. A similar bill to criminalize FGM was introduced into the Maine legislature last year, but failed to pass.

The Maine chapter of the American Civil Liberties Union (ACLU) issued a statement against the 2017 bill, calling it “redundant” and reiterating “there are already severe penalties under both Maine and federal law that cover FGM.”

The Norway ACT chapter leader who Rep. Sirocki is in contact with goes by the pseudonym “JB Giaour,” though in her emails to Giaour, Sirocki refers to him as “Jared.” Those very same emails clearly show Jared harbors the same anti-Muslim hate ACT supporters and chapter leaders are known for. For example, his email signature is a quote attributed to him stating, “Islamophobia is not a phobia because fear of Islam is rational. Islam is evil.”

The first email of note from Sirocki to Jared reads, “Good news - Yesterday, the governor agreed to submit a governor’s bill to prohibit FGM. Stay tuned - li [sic] am hoping to have a press conference next week.” On January 30, Jared forwarded Sirocki’s email to his chapter and called her “our sponsor for FGM.” 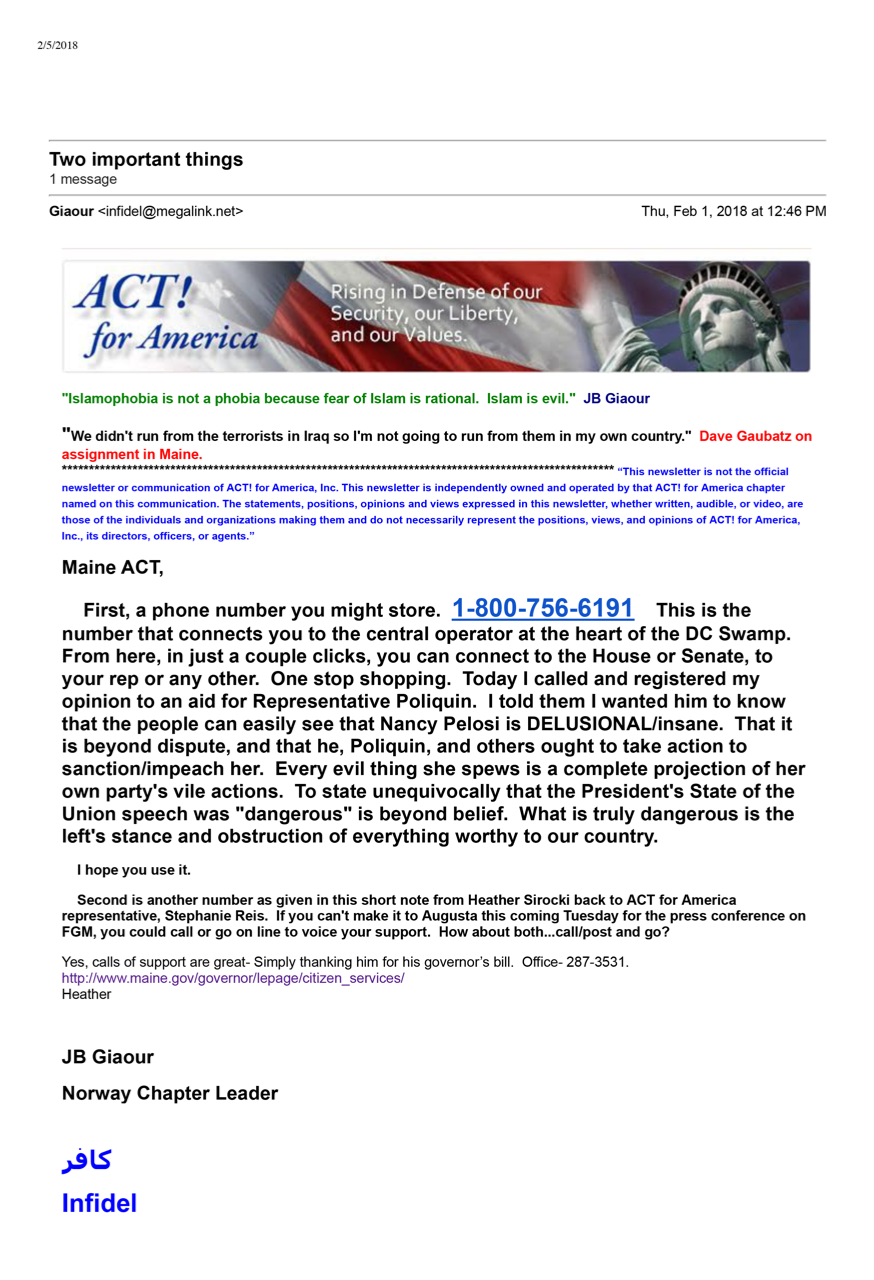 Jared also gloated the FGM bill is “a result of our initiation of this issue here in Maine,” adding, “This is incredible and anything you and your friends can do to muster support could easily make this happen this time.”

In another email, Sirocki solicited the help of Jared and his chapter to show up in support of the bill, writing “Jared, This is to let you know that there will be a press event next Tuesday. Would love to have a big crowd of support. Hopefully the media will cover it; they have been avoiding the issue. Heather.” 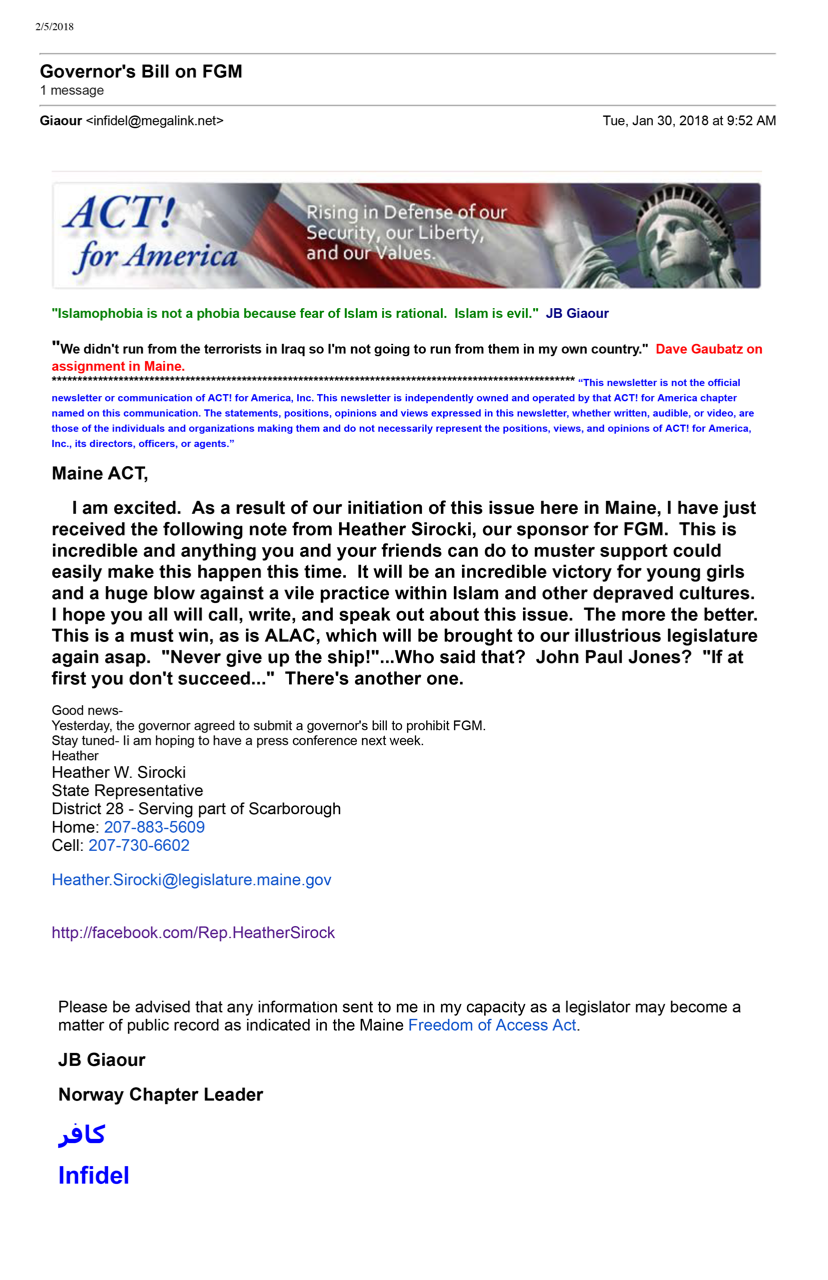 ACT for America national also reportedly lent its support for the press conference. According to Jared, “ACT national has come on board and supplied the speaker for this press conference, a victim of FGM.  Heather Sirocki is still fighting hard for this cause. We started this. We simply must win it.”

Jared’s response indicated that ACT for America national was providing a speaker for the event in Augusta and pleaded with activists to attend, writing, “This is our chance to make a showing in August that will make a difference.” The third and final email confirmed that Rep. Sirocki was indeed in conversation with ACT national encouraging ACT members to call the governors office in support of the bill. “Yes, calls of support are great,” said Sirocki.

The emails revealed that a person named F.A. Cole, an FGM survivor, and a member of the AHA foundation would be speaking at the event. The AHA Foundation is the namesake of its founder Ayaan Hirsi Ali, who is an FGM survivor and atheist and has become a prominent figure within the broader anti-Muslim hate movement. In a 2009 op-ed in The Australian, Hirsi Ali said that Islam “is at war with America.”

In 2015, Hirsi Ali spoke at ACT for America’s national conference.

As part of its ongoing efforts to vilify Muslims and their faith, ACT and other anti-Muslim groups often try to paint the practice of FGM as being intrinsically part of Islam despite it being a cultural issue whose origins predate Islam and whose victims have included women of Christian, Jewish, Muslim, animist and other traditional religious backgrounds.

Nevertheless voices from the anti-Muslim hate movement continue to push the false narrative that FGM is practice unique and intrinsic to Islam.

Hatewatch spoke to Dr. Azizah al-Hibri, a published scholar of American and Islamic law and founder of KARAMAH: Muslim Women Lawyers for Human Rights, an advocacy organization dedicated to advancing the rights of Muslim women through Islamic and civil law.

Al-Hibri expressed her skepticism of Maine’s FGM bill from a legal standpoint.

Discussing the findings of forthcoming research on FGM to be presented at the United Nations, she noted, “part of it is just PR because the FGM issue has been unfortunately and unfairly connected to Islam, when in fact it is a cultural issue.

“By connecting FGM to Islam and then criminalizing it, it’s basically saying that Islam requires criminal acts,” she said. “This is a continuation of attaching terrorism to Islam … whether FGM should be criminalized or not is a whole other issue and it’s not related to the religion.”