Earlier this week, Hatewatch published emails revealing Maine State Rep. Sirocki solicited the help of a local chapter of the anti-Muslim hate group ACT for America to show up in support of an event on February 6 announcing a new bill pertaining to female genital mutilation (FGM). The event took place at the state legislature in Augusta.

The bill, sponsored by Maine Governor Paul LePage, seeks to criminalize the practice of FGM in the state. The abhorrent practice, however, is already outlawed at the federal level and efforts to criminalize it further have been called “redundant” by the Maine chapter of the American Civil Liberties Union (ACLU). ACT, which works to pass anti-Muslim legislation at the state level, lists anti-FGM measures as one of its main legislative priorities.

When pressed by local news outlets about her connections to the Norway, Maine, chapter of ACT for America, Sirocki said she was not familiar with the organization and played down her collaboration with the group.

“I never attended a meeting. I really don’t know much about them except that they are a group that reached out to me to support my bill,” she told Maine public radio. Sirocki offered a similar response to a local ABC News affiliate, saying she was “was simply responding to emails asking about the bill.”

But emails published by Hatewatch show Sirocki actively sought out the group to show up for the February 6 event where the 2018 FGM bill was unveiled. Emails and other documents reveal her main contact with the group is its chapter leader, identified as Jared Bristol, who also conducts ACT-related business under the pseudonym “JB Giaour.” (Giaour is a derogatory Turkish word for a non-Muslim.) Bristol regularly advertises himself as being part of ACT, including in official written testimony in support of another iteration of the FGM bill.

In May 2017, Bristol provided testimony in favor of Sirocki’s LD 745. In it, he acknowledges being the Norway chapter leader and writes, “It was ACT here in Maine that brought this bill before you.” At the end of document, Bristol directs readers to the an article at “Jihad Watch,” the blog run by notorious anti-Muslim author and activist Robert Spencer.

Additional emails obtained by Hatewatch show that Bristol claims it was his group that first influenced Sirocki to propose an FGM bill.

In an October 28, 2017 email to supporters, he wrote, “As you all must know, we here in Maine ACT are responsible for getting Representative Sirocki engaged in the ongoing attempt to criminalize FGM in Maine.  Our efforts have garnered national attention.” 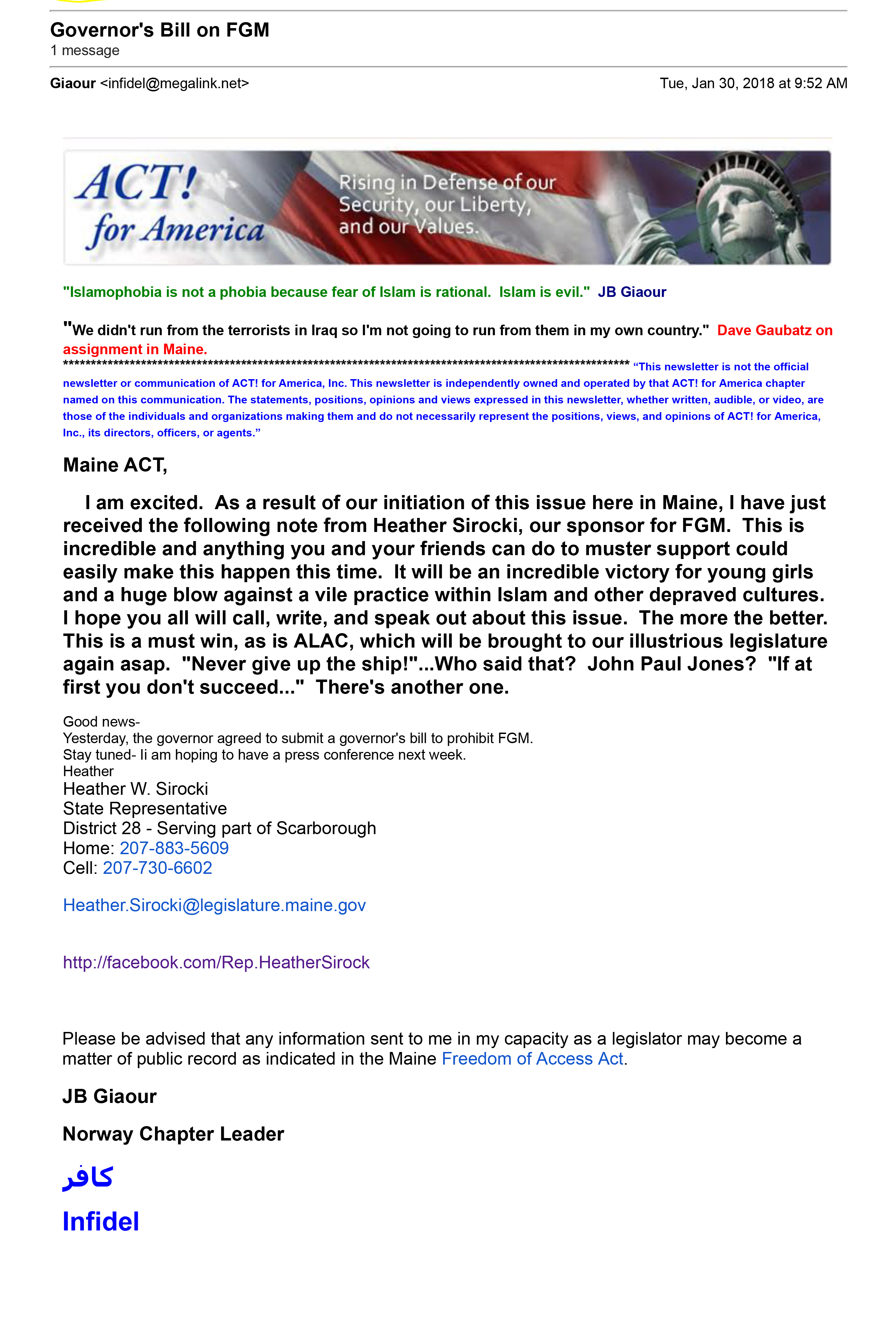 ACT is not the only anti-Muslim hate group Sirocki has associated with to get the word out about her FGM bill. On June 29, 2017, she promoted it on an episode of “Secure Freedom Radio,” a project of the Center for Security Policy (CSP), a hate group headed by longtime anti-Muslim conspiracy theorist Frank Gaffney.

During the program, Sirocki told Gaffney she started working on this legislation “because a constituent contacted me and asked me to submit this legislation, and I said if I was to receive the honor of being re-elected, I would do so.”

Bristol has also done very little to conceal his anti-Muslim bigotry. He has penned numerous letters to the editor in the Sun Journal not only advertising that he’s an ACT chapter leader, but also expressing anti-Muslim sentiment. In May 2017, he submitted a letter perpetuating  conspiracy theories, pushed by groups like CSP, that claim Muslims are secretly working to subvert the country from within, and that FGM is another example of this. Bristol claimed Maine Democrats are aiding this alleged takeover.

“Because that is what is coming,” he wrote. “If it takes 500 years, that is what Islam fundamentalists are working toward and the left is fully on board with that. There is a civil war brewing in America.”

He submitted another letter in 2010 opposing the construction of a local mosque in Maine, writing, “It is yet another Muslim symbol of victory planted near the point of their conquest ( A reference to the “Ground Zero mosque” in New York City).”

Indeed, Sirocki’s FGM bill is also not the only piece of legislation associated with ACT for America that she’s helped introduced. In 2011, she co-sponsored LD 1076, a model anti-Sharia law bill. ACT is one of the main groups pushing unnecessary anti-Sharia measures including Maine. The mastermind behind anti-Sharia legislation, David Yerushalmi, admitted to The New York Times in 2011 that the bills are a “heuristic” effort meant to stoke fear and suspicion of Islam in America.

Despite her claims in the media this week to the contrary, State Rep. Heather Sirocki has a documented history of working associating with anti-Muslim hate groups both in Maine and nationwide.