For the third straight year a motley crew of far-right individuals united by their prejudice against Muslims will be gathering in New York State’s Southern Tier region.

There, they will be protesting outside of Islamberg, New York, a hamlet with a population of 200 and the object of far-right conspiratorial obsession for several years.

On July 13 and 14 a group called American Bikers United Against Jihad (ABUAJ) will be organizing its “3rd Annual Ride for National Security.” According to one description posted in the event’s closed Facebook group,

“This is a[n] awareness ride to bring publicity and awareness to these compounds and their terrorist tied backers from the Middle East, MOA [Muslims of America, the group who founded Islamberg], CAIR [Council on American Islamic Relations, a civil rights group], and ISIS. We need good PR for this. We are letting them know. WE KNOW! And we aren’t going to let them turn this country in to a SHITHOLE or enforse [sic.] Sharia on us here like the UK, Eastern Europe, Middle East and coming soon to a town near you in Canada. Not here. Not ever! See you soon!” 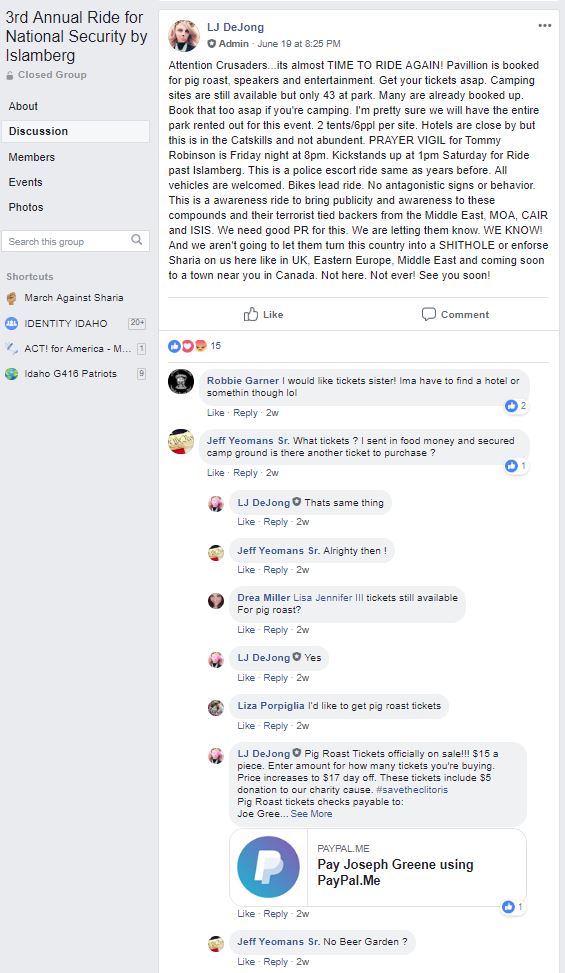 The two-day event begins Friday night with a prayer vigil for high-profile UK anti-Muslim provocateur Tommy Robinson, who was recently jailed for violating a court-ordered restriction on media reporting of an ongoing criminal trial. The next day, event participants will form a motor vehicle caravan and ride past the outskirts of Islamberg before heading to a local state park where they will have a “pig roast,” presumably an act intended to insult the Muslim residents of Islamberg.

The enduring conspiracy theory behind the protest

For at least a decade, if not more, Islamberg and other settlements directly affiliated with the Muslims of America (MOA) movement have been accused of being terrorist training camps by far-right detractors. One of the key sources of this myth was a 2009 documentary produced by Martin Mawyer, founder of the Christian Action Network, called, Homegrown Jihad: The Terrorist Camps Around the U.S. Others, such as Ryan Mauro a national security pseudo-expert who runs the anti-Muslim hate group Clarion Project, have made Islamberg and the MOA an object of his obsession, producing a project called the “Fuqra Files.”

However, mainstream news investigations into Islamberg and other MOA locations have not found any credible evidence to substantiate the theory that these are “terrorist training” sites. Security analysts do acknowledge that MOA, which is based out of Islamberg, is the successor to Jama’at al-Fuqra, which was linked to ideologically-motivated violence and other criminal acts in the 1980s and that they previously peddled antisemitic conspiracies.

As Oren Segal, director of the Anti-Defamation League’s Center on Extremism, pointed out in a 2017 interview with the Associated Press, “I think the predominant narrative of terrorist training camps is one that is, first of all, unproven. But … I think [the allegation] is used to create broader fear against Muslim communities.” In the same interview, Segal also pointed out that MOA individuals are not among the 500-plus individuals arrested for seeking to commit acts of terrorism against the United States in the name of an extremist interpretation of Islam.

Local and state police agencies familiar with Islamberg’s residents have expressed similar sentiments and sought to dispel rumors and other hoaxes for quite some time.

In April 2015, former congressional candidate, member of several militia extremist groups and far-right ideologue Robert Doggart, then 63, was arrested by federal law enforcement for planning a terrorist attack on Islamberg. During a recorded cell phone conversation with an FBI informant, Doggert allegedly said, ““Those guys (have) to be killed. Their buildings need to be burnt down. If we can get in there and do that not losing a man, even the better.”

While event organizers have been emphatic about communicating their intent to be peaceful and lawful, that hasn’t stopped attendees from expressing violent fantasies about Muslims in both the closed and open groups.

For example one supporter of the event posted a slightly toned-down version of a popular anti-Muslim online meme that clearly condones genocidal violence against Muslims: 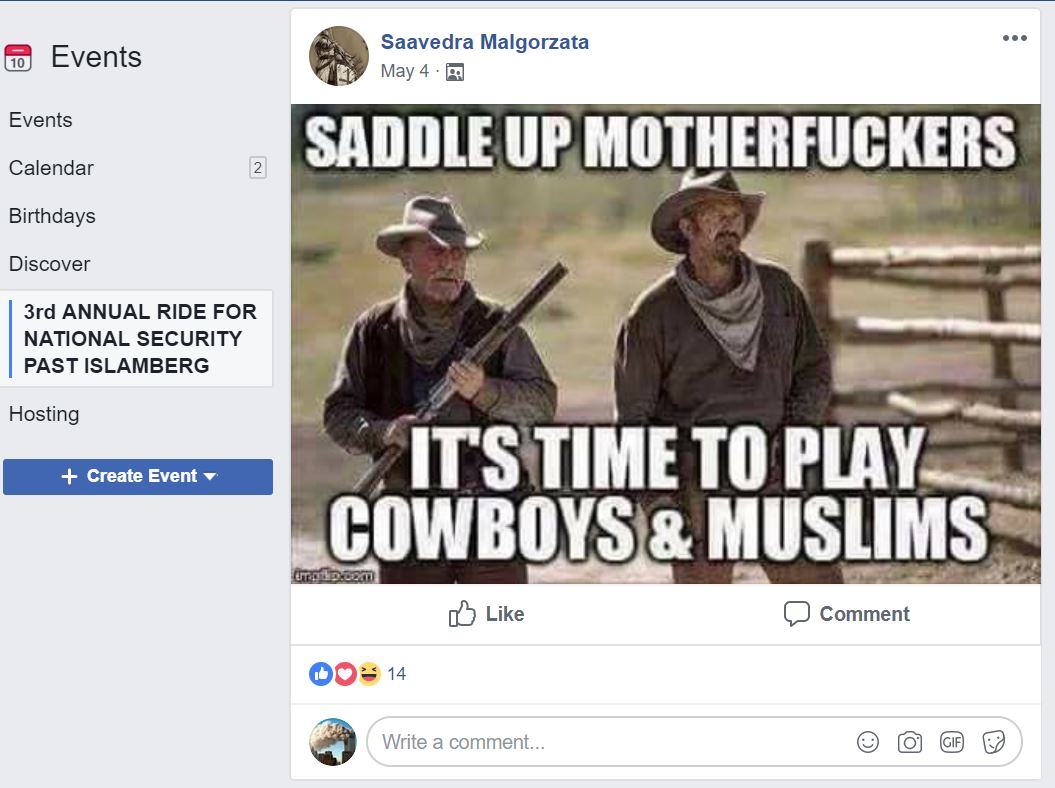 Another expressed interest in a holding a volleyball game of “Americans vs Muslims but the ball needs to have 2 inch spikes all around it and we get 1st serve”: 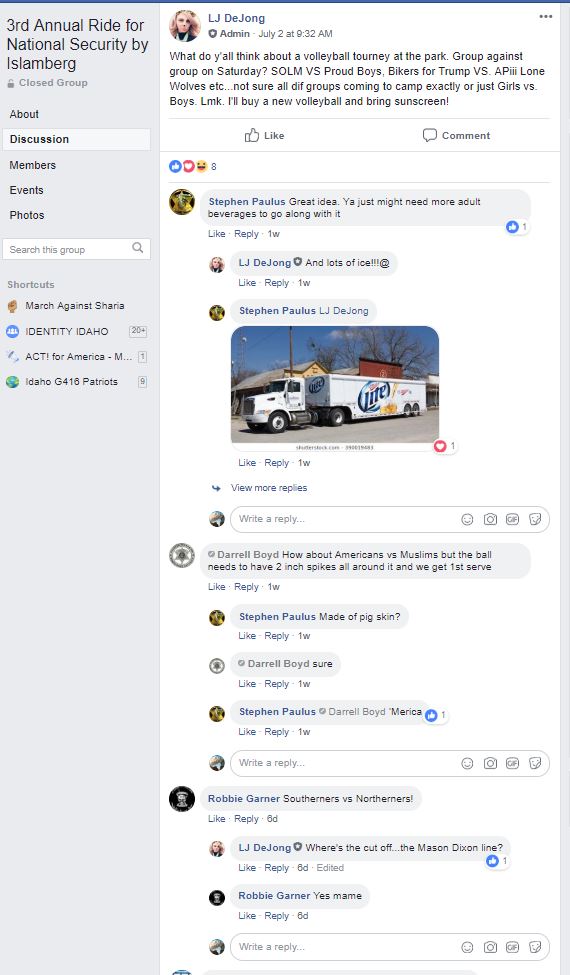 The group behind the event, American Bikers United Against Jihad, has been around since at least 2015 and is run by Rami “Ram” Lubranicki, 55, a resident of central New Jersey and peddler of anti-Muslim hate. As recently as June 26, Lubranicki reposted anti-Muslim content that included the statement, “Look who is actually "the original" Nazi baby. Islam.. yep that's right... Just ask all the cultures that disappeared over the last 1400 years.” 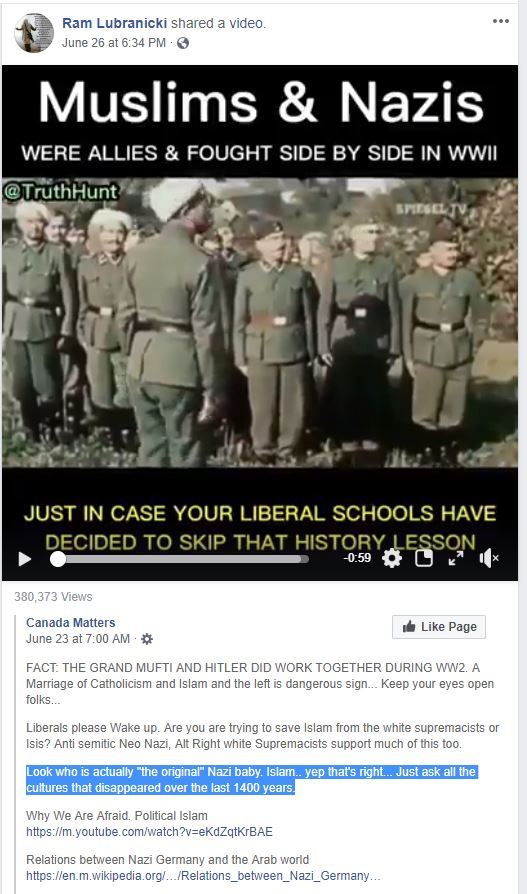 Lubranicki, who supports the idea that Islam is consistent with Nazism and states on his Facebook profile “I am not a Jew with trembling knees, I am a proud Jew with 3700 yrs [sic] of civilized history,” has also previously posted content about “white genocide” of South African farmers — a popular topic among white supremacists. 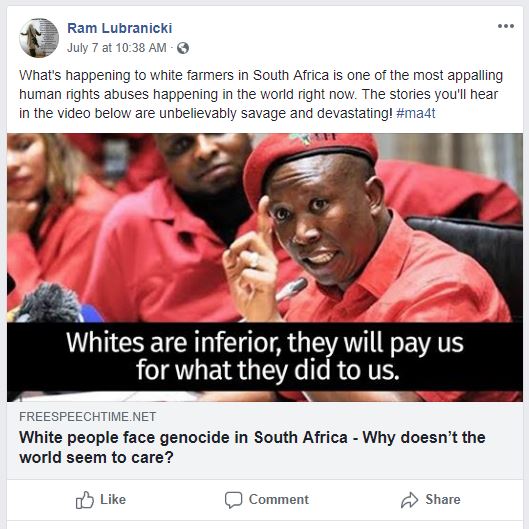 In 2017, Lubranicki and two other individuals were allegedly involved in a physical assault against a protester of Palestinian descent in Washington, D.C., in which he kicked the man “in his side and hit him in the right eye with a wooden pole.” Lubranicki and his accomplices, who are members of the hate groups Proud Boys and Jewish Defense League, were charged with hate crimes for the assault. The case remains in court.

In addition to Lubranicki, the other key figure behind the event is Lisa DeJong, who appears to be the main online organizer. DeJong’s Facebook profile (“LJ DeLong”) includes the descriptions, “Christian Patriot” and “Worked at American Patriot the III% National,” an antigovernment extremist group. Although DeJong claims to be no longer directly working for a specific militia group, photos from April 2018 show her posing with individuals associated with the militia movement.

As a lead organizer for the event, DeJong has not hesitated to reach out to militias and other far-right extremists. As Hatewatch previously reported, individuals tagged in one of her posts promoting the event include a variety of high-profile regional and national far-right figures, such as  American Patriot the III% founder and national head Scot Seddon, founder of the far-right group American Warrior Revolution Ace Baker, founder of the New York-based Liberty State Militia Nathan Mizrahi, provocateurs Joey Gibson and Tusitala (John) “Tiny” Toese of the far-right group Patriot Prayer, self-described “Confederate Patriot” Billy Sessions, and Alt-Right symbol Kyle “Based Stickman” Chapman.

According to one of DeJong’s posts in the closed event page, speakers will include Rami Lubranicki, Ace Baker, and Lisa Bennett Joseph, the deputy regional director of Central New Yorkers for Trump (CNY4Trump) and activist affiliated with ACT for America, a national anti-Muslim hate group. Joseph was a lead organizer for ACT’s 2017 anti-sharia rally in Syracuse, New York.

As of July 11 only 41 individuals are listed as “Going” on the event’s Facebook page, with another 19 as “Maybe,” attendance numbers that seem to echo the sparse interest expressed in years past.

Still, this event is another example of persistent anti-Muslim paranoia and prejudice. And those numbers go well beyond the handful individuals likely to attend this weekend’s hate- and extremism-fueled protest.