Michael Meyer, the Pizzagate-style conspiracy theorist who leads the Arizona vigilante group Veterans on Patrol (VOP), came out with a warning to local law enforcement on Monday, a day after he was arrested for the second time this month.

Meyer told his fans on Facebook that there will be trouble if Tucson police follow through with a threat to shut down a homeless camp he runs on private property in the city. The camp has been running for years, and Meyer claims the tents on the property house about 50 people, including some military veterans.

“We’re building our team. We’re going to be on standby,” Meyer said in a video posted live to Facebook. “[If] they move in and attack that camp, there’s hundreds of us coming in. We’ll surround them.”

Meyer, who goes by the name Lewis Arthur, has run the homeless camp as something of an antigovernment experiment, claiming his group doesn’t take money and therefore cannot be regulated. ("We're regulated by God, not the government," Meyer says.) 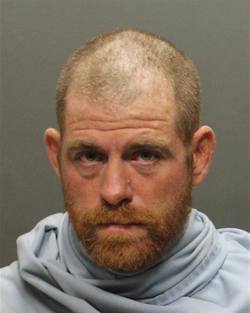 But while Meyer claims to have helped hundreds of homeless get off the streets over the years, he’s spent the past two months more concerned with chasing a Pizzagate-type conspiracy theory in the desert in and around Tucson. He’s declared that he and his group are at war with child trafficking cartels who he claims are being aided by the Clinton family and a vast ring of “elites.”

In the process, he has promoted a well-worn antisemitic canard based on the last name of Tucson Mayor Jonathan Rothschild and accused local officials of covering up child sex crimes. He even got the antigovernment group the Oath Keepers to get involved, with its leader Stewart Rhodes endorsing the conspiracy theory and traveling to Arizona in June in support of Meyer.

But all has not worked out so well for Meyer. The VOP leader has been arrested twice since beginning his mission, which he nicknamed “Operation Backyard Brawl." His most recent arrest came on Sunday, July 22, on suspicion of trespassing and skipping out on a court date on an earlier assault charge. Tucson police said he’d been trespassing on an abandoned industrial site owned by the multinational cement company Cemex, which is headquartered in Mexico.

Meyer has claimed for weeks that he and VOP uncovered evidence that the property was used as a “child sex camp,” a theory that local and federal investigators have repeatedly debunked. Instead, authorities say, all the group found was leftover junk from an abandoned homeless encampment.

Meyer’s group claimed in early June that it was in a “standoff” with local law enforcement at the site. They locked the gates to the property and said that they were occupying it.

Eventually, Tucson police coaxed the group away from the site, and Meyer’s crew turned its attention to the desert west of Tucson, where it claimed to be going toe-to-toe with cartels.

That effort in the desert led to more trouble, though. Meyer was arrested by the Pima County Sheriff’s Department on June 8 on suspicion of felony trespassing in an area northwest of Tucson. The sheriff’s office has released few details on that arrest but said Meyer is being investigated for “multiple other incidents.”

After that arrest, Meyer returned alone to the Cemex site where “Operation Backyard Brawl” began. He climbed up on a tower at the industrial site and claimed to be “occupying” it while making demands of Tucson police and others. He livestreamed numerous videos from atop the tower and said he would only come down if God told him to.

In its announcement of Meyer’s arrest on Sunday, the Tucson Police Department said that when he left the Cemex property in June, he agreed not to return. It said Meyer broke that agreement when he began occupying the tower.

The department also indicated it would work towards shutting down the homeless camp that Meyer has been running, saying that the property owner had “public safety concerns” and that Meyer had been told the camp was “no longer welcome.”

“The department will also be working with various homeless advocacy groups and other social service groups to help relocate any homeless individuals impacted by the closure of Meyer-associated encampments in Tucson involving trespass on private property,” the Tucson police department said in a statement released Sunday night.

Meyer went off on the police department in his video posted to Facebook on Monday. He accused the police chief of helping cover up crimes and threatened to release information that he said would show the department routinely ignored laws in the past to assist VOP's work with the homeless.

As for how VOP would handle the possible closure of the homeless camp, which the group has nicknamed “Bravo Base,” Meyer said authorities would have a confrontation on their hands.

Meyer said the police department “has now launched a smear campaign and planted a seed in the public that they’re planning to go in and shut down Bravo Base.”

“No you’re not,” said Meyer, who frequently wears a cross around his neck and uses religious language to discuss his efforts. “You can’t shut down God. Because hundreds of us will be there.”

He said, however, that the group would not be armed.