The following is a list of activities and events linked to American white supremacist, neo-Nazi, anti-LGBT, anti-immigrant and anti-Muslim groups in Europe. Organizations listed as hate groups are designated with an asterisk.

Identitarian group praised by U.S. far right shown to be antisemitic and racist: The Flemish identitarian nativist group Schild & Vrienden (S&V, Shield and Friends) has gotten attention in the U.S. far-right media for some of its publicity stunts, in particular their curated video of an action in which they tore down European Union banners from the Gravensteen castle at a protest for refugee rights in Ghent, Belgium. That move went viral in March 2018.

The demonstration was prominently featured across the far-right media in the U.S., from the conspiracy theorist Infowars to Gateway Pundit. The founder of S&V, Dries Van Langenhove, was also interviewed by the white nationalist propaganda outfit Red Ice*. Far-right YouTuber Lauren Southern also praised the action as “very cool to see!”

S&V also plan to run candidates for local offices and other political positions.

Like other European identitarian groups, S&V deliberately stages choreographed, provocative anti-immigrant demonstrations promoted through slick videos to appeal to mainstream followers. But an undercover investigation by Flemish broadcast network VRT released Sept. 7 revealed the members of the group were in fact sharing scores of racist, antisemitic, Islamophobic and sexist content in Discord and Facebook groups. 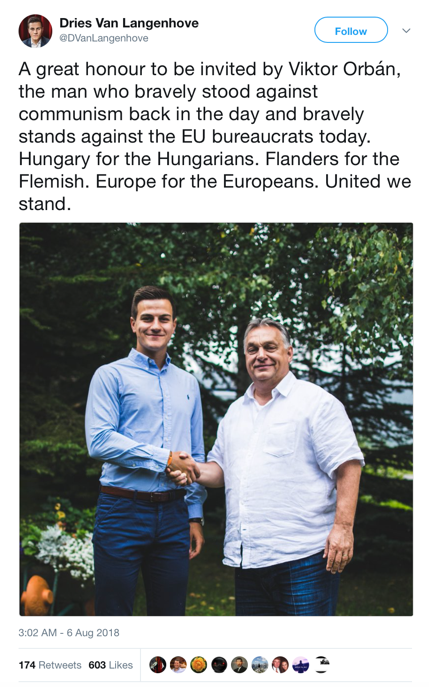 The group met with Hungarian Prime Minister Viktor Orbán: Van Langenhove and other S&V members met with strongman Hungarian Prime Minister Viktor Orbán at a festival in Romania in August 2018. Orbán has become a major figurehead of anti-immigrant, traditionalist and illiberal forces in Europe. During the exchange, some of which was on video, Van Langenhove and Orbán discussed family values and the threat of cultural decline in the West. Orbán told S&V, “If you don’t awaken your nation as soon as possible, Belgium will be dramatically different in 5 or 10 years time.” Van Langenhove later tweeted:

“A great honour to be invited by Viktor Orbán, the man who bravely stood against communism back in the day and bravely stands against the EU bureaucrats today. Hungary for the Hungarians. Flanders for the Flemish. Europe for the Europeans. United we stand.”

Though this moment was not on video, Van Langenhove claims Orbán met with the group to discuss the Flemish government in Belgium with an eye toward the Hungarian population in Romania.

Effects of investigations: The investigation led to Van Langenhove’s expulsion from the University of Ghent, where he sat on the student board, and sparked protests in the country. An investigation of the group by the regional public prosecutor is ongoing.

Head of Italian broadcast service shared fake news: In Italy, the controversial Marcello Foa was appointed as the new president of the country’s public broadcast service by both ruling parties, the far-right anti-immigrant Lega (League, formerly known as Lega Nord or Northern League) and the anti-establishment Five Star Movement. 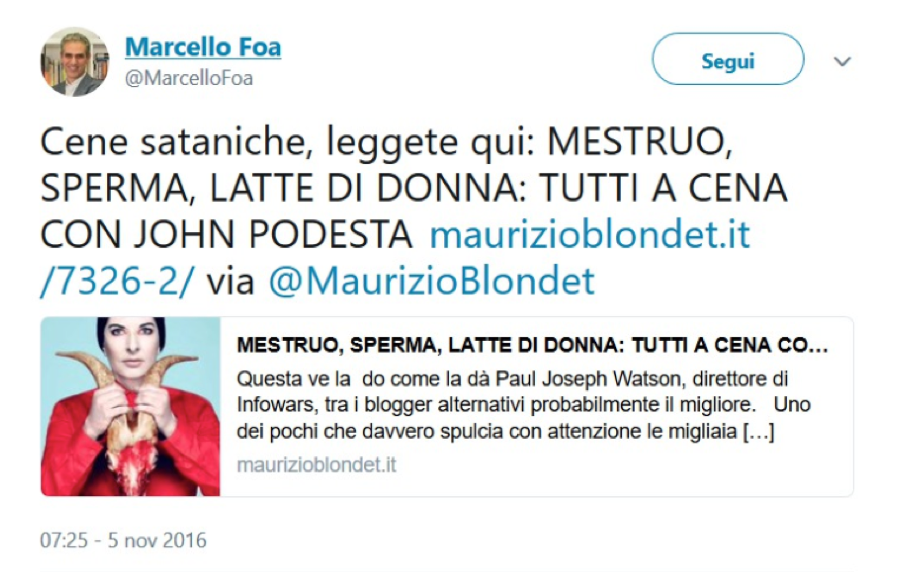 Foa is known for his propensity for fake news. He has shared fake news stories by Infowars — notably one claiming former presidential candidate Hillary Clinton attended Satanic dinners — and stories initiated by Pizzagate booster Mike Cernovich. He has also retweeted his support for the anti-immigration mission of the identitarian group Defend Europe.

Also known for his anti-LGBT rhetoric, Foa has called being gay abnormal. During his tenure as CEO of Corriere del Ticino, the newspaper printed on its front page a fake news story claiming that German police were deliberately ignoring Islamic terrorist threats, a falsehood it was then forced to retract.

Foa is very close to the deputy prime minister of Italy, the League’s Matteo Salvini, for whom Foa’s son works.

Bannon designing curriculum for Christian leadership course: Also in Italy, former Trump advisor Steve Bannon is helping design a curriculum for a leadership course at a monastery outside Rome, led by the Dignitatis Humanae Institute, a right-wing Catholic nonprofit. Headed by Breitbart contributor and Bannon ally Benjamin Harnwell, its board includes a plethora of conservative cardinals opposed to Pope Francis’ more liberal approach to the papacy on issues such as marriage and sexuality. The board members notably include vocal Pope Francis critic Cardinal Raymond Burke, an influential conservative church official close to far-right movements who has expressed his support for Trump and criticized Islam. 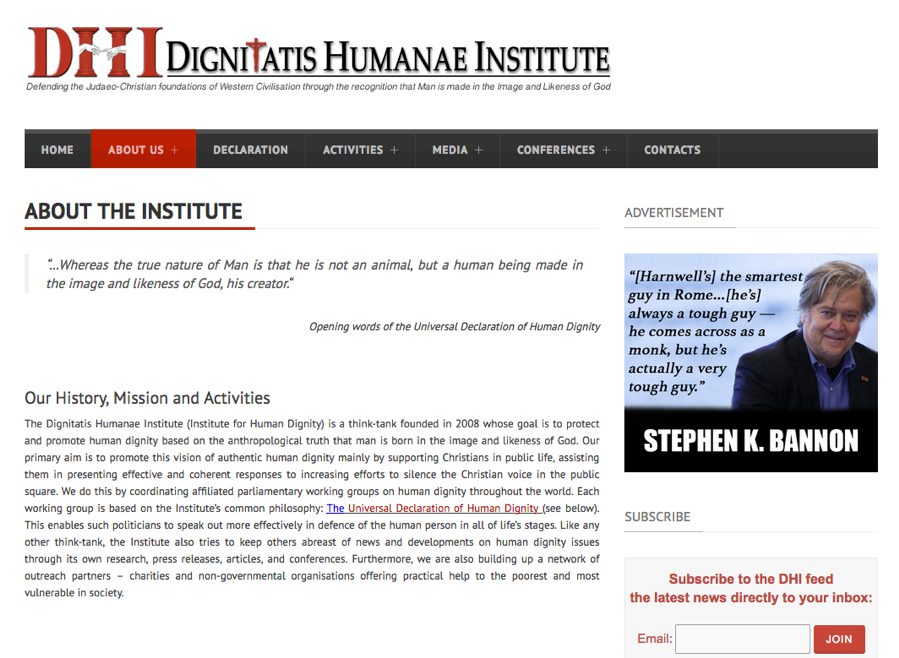 Bannon has been key to the development of the Institute and is listed as one of the Institute’s patrons on its website. He was a speaker at its Vatican conference in 2014, where he was interviewed by Harnwell. In that conversation, which has since become famous, he shared thoughts on capitalism, the necessity of populist revolutions and the rise of a “global tea party movement.”

Harnwell set up the Institute after Christian conservative Rocco Buttiglione failed to secure a position as European Commissioner after describing homosexuality as a sin.

Buttiglione is a member of an international coalition called Agenda Europe — along with World Congress of Families* (WCF) and ADF International* — whose goal is to roll back LGBT and reproductive rights. (As Hatewatch reported, members of the coalition, including American groups, have been active in pushing for a referendum in Romania that may prevent the legalization of same-sex marriage in the country.)

Italian far right joins Bannon’s “Movement”: Meanwhile, the Deputy Prime Minister of Italy, Matteo Salvini, promised to join Steve Bannon’s far-right “The Movement,” which wants to put right-wing populists in power at the upcoming European Parliamentary elections next May. The smaller far-right party Brothers of Italy, at whose rally Bannon spoke on Sept. 20, is also joining the group. The French far-right party Rassemblement National (formerly known as Front National), at whose yearly meeting Bannon spoke in March 2018, has said it is also considering joining.

German far right skeptical of the movement: In Germany, however, the far-right German party Alternative für Deutschland (AfD, Alternative for Germany), rejected Bannon’s offer to join "The Movement," with AfD co-leader Alexander Gauland declaring: “We’re not in America. The interests of the anti-establishment parties in Europe are quite divergent.”

Still, Bannon met with AfD hardliner and member of Parliament Petr Bystron, alongside the president of the Czech Republic Milos Zeman in late September.

AfD member at Eagle Council in St. Louis: Bystron was also active on the other side of the Atlantic. He traveled to St. Louis to be given an “Eagle Award” at the “Eagle Council” conference organized by the Phyllis Schlafly Foundation — alongside another European, Polish MP Dominik Tarczynski. Bannon had been given the same award last year. 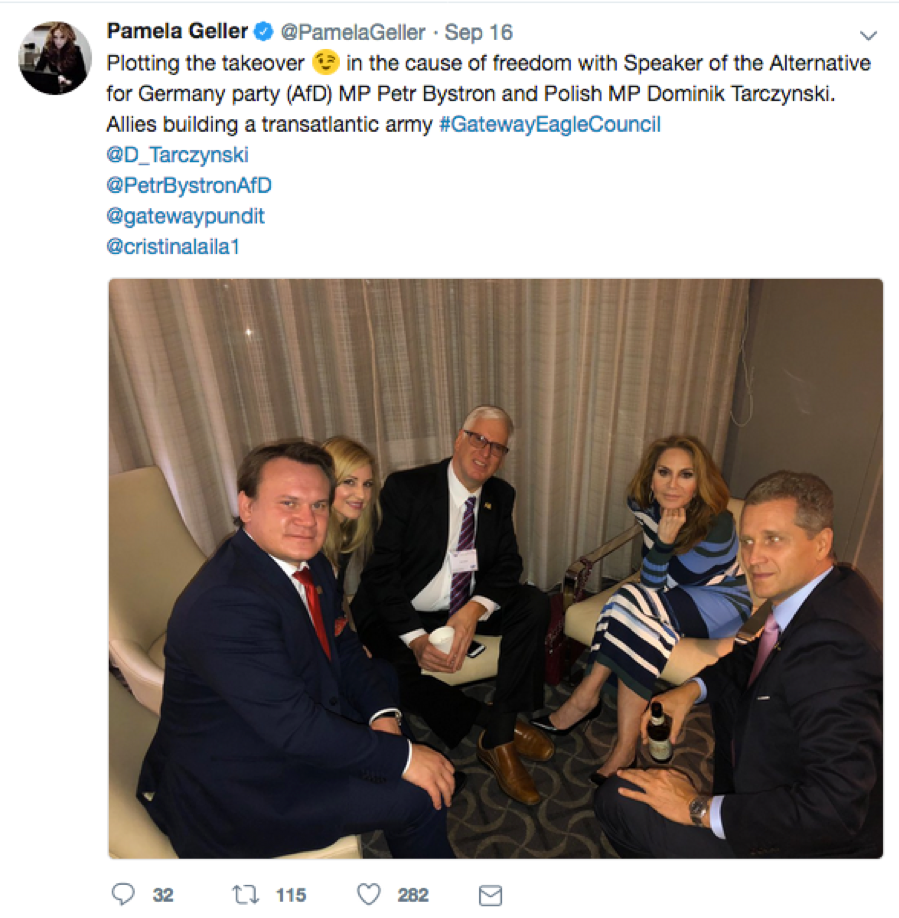 Pamela Geller's photo of a meeting she calls "allies building a transatlantic army."

The conference featured many conspiracy theorists like male supremacist and rape apologist Mike Cernovich and racist “alt-right” YouTuber Stefan Molyneux. The co-organizer of the conference was Jim Hoft, the founder of Gateway Pundit.

While there, Bystron and Tarczynski met with Hoft and with anti-Muslim extremist Pamela Geller, who described the meeting in a tweet as “allies building a transatlantic army.”

When he received his award, Bystron told the audience he had to stay diplomatic since he worked as an MP, but “let’s kick leftists’ ass.”

Far-right ultranationalist parties lose EU funding: In a blow to far-right groups at the European Parliament, however, the far-right ultranationalist parties Alliance of European National Movements (AEMN) and Alliance for Peace and Freedom (APF) are no longer entitled to EU funding. Both coalitions claimed they had members in the required number of European states, but when contacted, some of the listed members did not know of the groups, with one even suggesting their name had been forged.

Fiore has a number of ties to the U.S.-based anti-LGBT WCF*, in part through the anti-abortion organization Pro Vita, which shares a mailing address, members and a vision with Forza Nuova — and which employs Fiore’s children. As hacked emails showed, Fiore is close to WCF representative Alexey Komov, who called him our “pro-Russian Italian friend.” Fiore’s son, Pro Vita’s Alessandro Fiore, spoke at the WCF congress in Moldova in September, as Hatewatch noted.

Gavin McInnes supports Tommy Robinson: The founder of the Proud Boys*, Gavin McInnes, traveled to the U.K. to support nativist activist Tommy Robinson (whose real name is Stephen Yaxley-Lennon) for his court case. Yaxley-Lennon’s arrest for contempt of court has become a cause célèbre in the American far right. (He was later released on bail.) 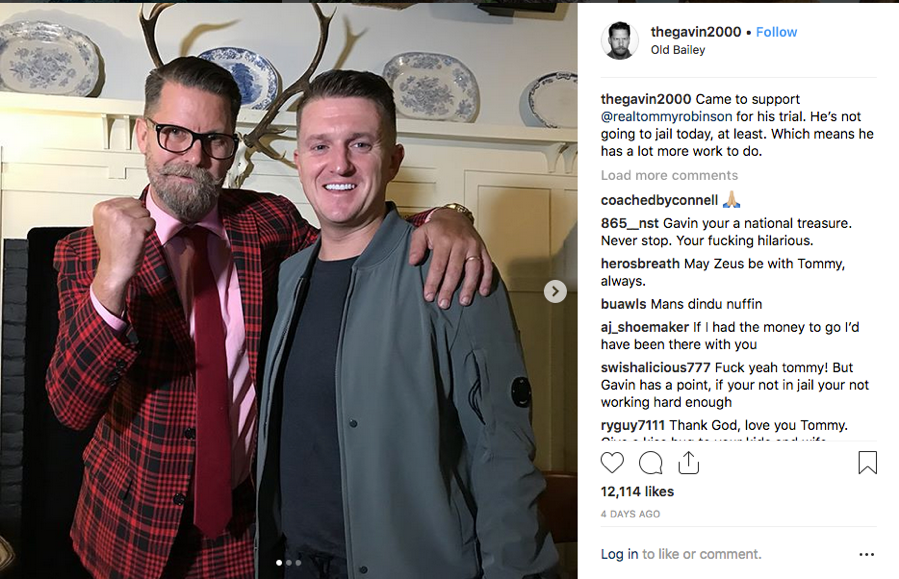 The far-right party behind Brexit, United Kingdom Independence Party (UKIP), has meanwhile been torn by debates over whether Robinson, who was banned from the party for his virulent and violent anti-Islam activism, should be allowed to join. A motion to approve Robinson has for now been blocked on a technicality.

This follows the party’s decision to rebrand itself as more extreme than before. It has notably allowed in and sought advice from far-right social media influencers such as Gamergate personality Carl Benjamin (also known as Sargon of Akkad) and Paul Joseph Watson, editor of the conspiracy website Infowars. The two addressed UKIP’s 25th anniversary conference on Sept. 22-23 via video.

Rebel Media cruise canceled: A cruise down the Danube planned by the far-right Canadian outlet Rebel Media, which would have included Tommy Robinson, Rebel Media’s Katie Hopkins (also a National Rifle Association member) and American anti-Muslim activist from Middle East Forum Daniel Pipes, was canceled. Though Rebel Media claims it was because of leftist haters, it appears the cancellation could have simply been due to lack of attendees. Pipes has met with far-right politicians in Europe in the past year, and his Middle East Forum also funded a June rally in support of Tommy Robinson in London.

Muslim groups call for ban of Franklin Graham: An umbrella organization of hundreds of Muslim groups in the U.K., the Muslim Council of Britain, have called for banning the evangelist Reverend Franklin Graham from the U.K. because of hate speech, in particular his characterization of Islam. Graham has described Islam as “a very wicked and evil religion.” He is also openly anti-LGBT.

Denmark’s laws crack down on immigrants: This month, Denmark has proposed a law to deny citizenship to immigrants who decline to shake their mayor’s hand in a new bill pushed by the country’s right-wing coalition. The move is widely believed to target Muslims specifically, some of whom do not shake hands for religious reasons.

In July 2018, Denmark came under widespread scrutiny for its proposed “ghetto laws,” mandating that children over one year old in majority Muslim neighborhoods be separated for 25 hours a week to be instructed in Danish values, at the risk of losing state benefits if parents don’t comply. The laws would increase sentences for crimes by inhabitants of those areas compared to those from other neighborhoods. Families from the neighborhood could also lose benefits if a child commits a crime. Similarly, parents who take their children back to their country of origin for long periods of time could be sentenced to prison time or deported.

The proposal is currently being finalized and the laws are expected to go through, backed by parties across the political spectrum.