Even male supremacist pick-up artist Roosh is wondering why he’s still on Twitter.

In the past week, Roosh has spread a hashtag calling for men to report sex workers or Instagram models who don’t pay income tax. The #ThotAudit hashtag originated with a Twitter user on Nov. 22 and has gone viral in the past few days. Roosh gave it plenty of airtime. He was the fourth biggest Twitter influencer for the hashtag on Tuesday morning, according to social media analysis platform hashtagify.

Thot is a misogynistic slang term which stands for “that ho over there.” In keeping with the harassment campaign, participants are now redefining the term as “that ho owes taxes.”

In a series of tweets, Roosh called on men to report women who make money but don’t pay taxes, writing: “your vagina isn't a 501(c)(3) charity” and claiming that “these girls are getting a free ride via beta bux and a broken sexual marketplace that is rigged in the favour of females.”

Even Roosh is aware this is not about taxes — the men reporting the women have no inkling of their taxable incomes or tax declarations — but about capitalizing on male resentment by shaming sex workers. As Roosh explained in a podcast on the topic — where he railed against video games featuring LGBT and black characters, put on a “black accent” and used racial slurs — he received a flood of messages from men asking him to support the #ThotAudit:

What’s more, he raged, women are “invading every space and turning it into a softcore pornography hangout.” Not usually so prudish, Roosh regularly tweets pictures of barely-clad women with the caption “would you bang?”

Roosh is notorious for his violent misogyny, condoning rape in his writings by advocating that “no mean no — until it means yes” and disparaging women as “c-- buckets.” He has shared accounts of sexual encounters of his own that amount to assault, by his own description. His violent rhetoric led Amazon to take Roosh’s books down, and has also resulted in a ban from PayPal and even from the UK.

The deplatforming led him to close his male supremacist website, Return of Kings (ROK), a cornerstone of the so-called “manosphere” which claimed to give men sexual and dating advice. This advice often dismissed consent as an unfair burden to men and treated women’s rights as non-existent. ROK is designated as a male supremacist hate group by the Southern Poverty Law Center (SPLC). In November, after SPLC published a story calling out Barnes & Noble for selling Roosh’s pick-up advice book, Game, the book was removed from their website.

Roosh is still present on Twitter. And the #ThotAudit campaign gave him a boost:

“This has blown up my account. I usually get 300,000 views a day on my Twitter. In the past day I’ve had three million.”

Roosh has continuously used the platform to spread his misogynistic campaigns and antisemitic conspiracy theories in the past. On November 27, he was prevented from tweeting from his account for twelve hours because of the misogynistic campaign, a move Twitter made after Hatewatch reached out to the company for comment.

Even Roosh is aware his privileges aren’t normal. He tweeted on Nov. 24, “People ask me how I’m still on Twitter. I believe it’s divine protection.” 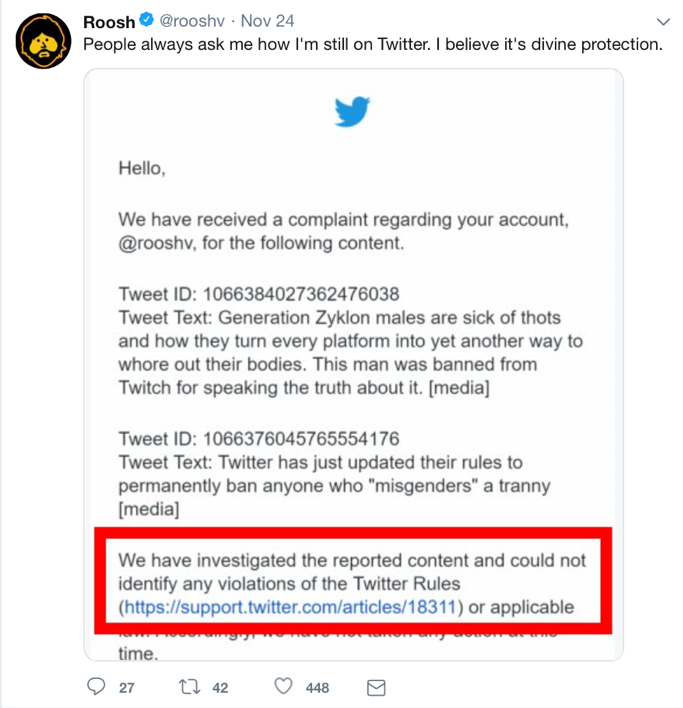