Senior Judicial Watch investigator William Marshall twice donated to a GiveSendGo campaign for “Covid Research” started by an anti-vaccine former Trump administration official linked to the Canadian and U.S. trucker convoys, according to Hatewatch’s review of a leaked donation list.

The donations are further evidence of support by the staff of Judicial Watch, which claims to be a nonpartisan watchdog organization, for hard-right causes that became mainstream during the Trump administration. Hatewatch previously reported Judicial Watch’s director of investigations, Christopher Farrell, paid dues to the pro-Trump, antigovernment extremist Oath Keepers. 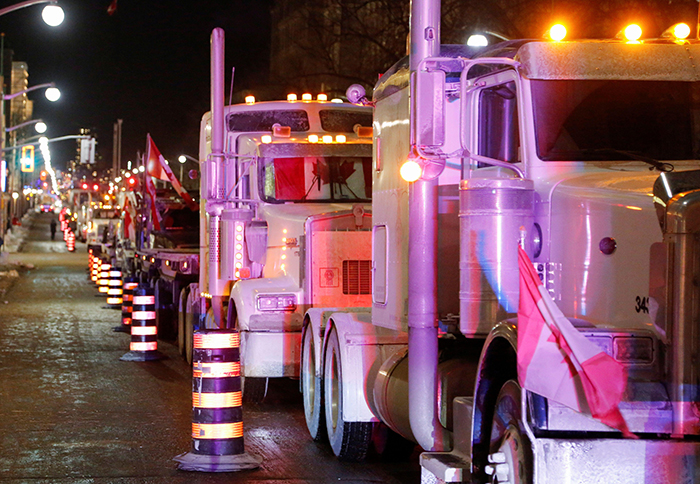 Trucks that are part of a trucker convoy to protest COVID-19 vaccine mandates for cross-border truck drivers are seen on Parliament Hill in Ottawa, Ontario, Canada, Jan. 28, 2022. (Photo by Reuters/Patrick Doyle)

Marshall supported Dr. Paul Alexander, a Canadian with a doctorate in health research methodologies, who worked as a senior science adviser to the former assistant secretary for public affairs at the U.S. Department of Health and Human Services during Trump’s term.

The donation list comes from the February GiveSendGo leak. GiveSendGo is a Christian crowdfunding site favored by the hard right. Siblings Heather Wilson and Jacob Wells launched the site in 2014.

Transparency journalism collective DDoSecrets shared over 5GB of the leaked data with Hatewatch.

Marshall did not respond to Hatewatch’s request for comment.

Alexander espouses pro-infection, anti-lockdown and anti-vaccine viewpoints. During his time at HHS, he wrote to his superiors that “infants, kids, teens, young people, young adults, middle aged with no conditions” should be exposed to the virus due to their “zero to little risk” of serious consequences, Politico reported.

He continued: “We want them infected.”

Alexander held the position from April to September 2020. Alexander is also a prominent supporter of the anti-vaccine mandate trucker convoys that attempt to shut down major metropolitan areas in Canada and the U.S.

Alexander titled the GiveSendGo campaign “COVID research stipend support” and wrote to potential supporters that children “must not under any circumstance” receive COVID “vaccines for they could be severely harmed given the harms already emerging from adults and teens.”

There is no data showing significant harm from the Pfizer and Moderna vaccines. These two are the most widely used in the U.S. The Johnson & Johnson vaccine could cause blood clots in rare circumstances.

According to the documents shared by DDoSecrets, Marshall used his Judicial Watch email to sign up for GiveSendGo. The email was listed for both donations.

Alexander has raised over $37,500 through the campaign. The donation database lists Alexander’s own name and email address as the first to donate $100 on Oct. 27, 2021. The donator praised Alexander for “standing up for humanity, and for maintaining scientific integrity,” adding: “Your actions have saved lives, and when the Criminal Covid Enterprise is finally brought to justice in Nuremburg 2.0 trials [a reference to the trials where prosecutors convicted Nazis for their atrocities], you will be largely to thank. Thank you for protecting the children … thank you for telling the truth!”

Alexander denied to Hatewatch he made this donation himself. “I may have donated 1 or 5 $ to me to test how it worked but never 100$,” Alexander wrote in an email response.

Alexander also disavowed any ties to hard-right individuals or organizations but welcomed questioning of the science on vaccine safety and efficacy. He said the Politico report mischaracterized his support for Trump, and that he “would have worked for [former President Barack] Obama and even now for [President Joe] Biden if I could help them.”

GiveSendGo became a favorite for the hard right after hosting a fundraiser for Kyle Rittenhouse. Rittenhouse was lionized by the hard right after he killed Anthony Huber and Joseph Rosenbaum and wounded Gaige Grosskreutz during Black Lives Matter protests in 2020, which he testified at trial he did in self-defense. A jury acquitted Rittenhouse of murder and attempted murder charges in November 2021.

Marshall also led Judicial Watch’s reports on Clinton’s emails. He discussed in Judicial Watch videos his request for former Clinton aide Huma Abedin’s emails, and he alleged scandals in which he claimed Clinton was involved. Marshall also said the Department of Justice under Obama gave Clinton special treatment during an investigation into her use of a private email server during her tenure as secretary of state.

Clinton’s emails have played a major role in hard-right conspiratorial thought, including alleged Clinton misconduct. According to several conspiracies, the evidence of Clinton’s misconduct was contained in emails that Clinton deleted. Judicial Watch founder Larry Klayman has promoted some of these conspiracy theories.

Marshall regularly appeared on anti-Muslim extremist and conspiracy theorist Frank Gaffney’s podcast in 2018 and 2019. He discussed the politicization of intelligence agencies and former FBI director James Comey’s alleged misconduct as part of the Justice Department under former President Barack Obama.

The podcasts came amid a broad, right-wing attempt to discredit federal agencies as they investigated former President Donald Trump’s contacts with Russia before the 2016 presidential election.

The hard right and conspiracy theorists call the agencies and bureaucrats the “deep state.” The deep state is an integral part of broad, unfounded theories that D.C. insiders worked to spy on and undermine Trump.

Judicial Watch has partnered with hard-right figures including former Trump adviser Steve Bannon. The nonprofit has no known partnership with the Oath Keepers or the anti-Muslim Center for Security Policy, which Gaffney founded.

But Judicial Watch President Tom Fitton was a member of Groundswell, a conservative activist group of which Gaffney was also a member.

Fitton, too, rails against deep state “spying” on Trump.

The group focuses on anti-immigration, anti-abortion and anti-gun control issues, as well as numerous other issues the hard right has taken up.

By 2019, Groundswell pushed Trump to purge the deep state from his administration, Axios reported. Groundswell curated a deep state hit list and delivered it to Trump while he was president, according to the report.

Groundswell held weekly meetings at Judicial Watch offices, according to Axios and The New York Times.

The trucker protests began in the Canadian capital, Ottawa, in January. Organizations tied to the Canadian hard right, including the Maverick Party and the People’s Party of Canada, organized protests in Ottawa. Thousands of truckers disrupted international travel and commerce by blocking ports and crossings on the U.S.-Canada border to protest vaccine mandates and lockdowns.

Alexander told Hatewatch he was unaware of these connections and he “does not stand” for hateful rhetoric or supremacy.

The Canadian protest inspired right-wing organizers, including individuals with extremist ties and ideologies in the U.S. Thousands protested COVID-19 mandates in Washington, D.C., beginning on Jan. 23.

The protests continued, and Alexander was reportedly present at a protest at the National Mall on Jan. 27, where he expressed anti-lockdown views.

Organizers across the U.S. called for truckers to descend on D.C. to block traffic in the capital. The convoys failed to cause major disruptions, in part due to unclear plans, D.C.’s traffic laws and regular traffic.

The U.S. convoy faced increased scrutiny after main organizer Mike Landis invited onstage a man that called for truckers to “take ... back” Black Lives Matter Plaza in D.C., where protesters painted “Black Lives Matter” on 16th Street during the nationwide protests following the police murder of George Floyd in Minneapolis in 2020.

Organizers have disavowed the man’s comments. Alexander told Hatewatch the speaker had “gone rogue” and was not “properly vetted.”

Marshall has not publicly spoken about the trucker convoys, and his name does not appear in the main donation list for the Canadian trucker protests that raised over $540,000. Personal connections between Marshall and Alexander – if there are any – remain unclear.