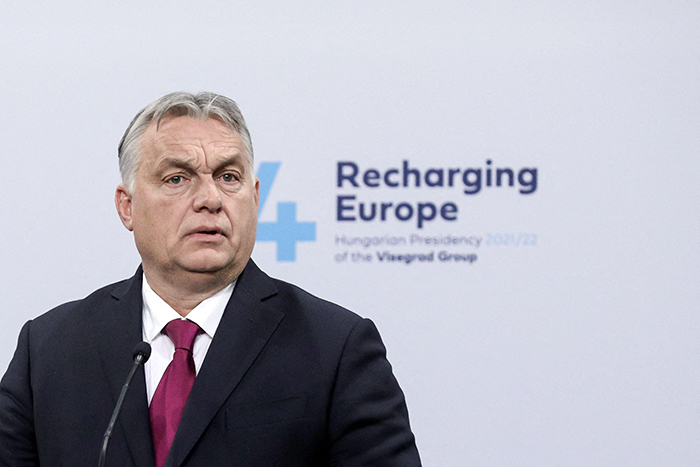 The Center for Fundamental Rights (AK, by its Hungarian abbreviation), a Hungarian government-funded organization that set up the event, first announced a potential CPAC gathering in Budapest in February 2020. AK delayed the event to late March 2021, and did so again after Russia invaded Ukraine, scheduling it for May 18-20. Should U.S. conservatives follow through on making the trip following Orbán's resounding victory in April elections, democracy advocates will be paying close attention.

Critics of Orbán note his antisemitism, racism and efforts to derail Hungary’s democracy by using state funds to aid his re-election. He has packed courts and choked out critical media by nationalizing journalistic outlets. Pro-government businessmen control much of Hungary’s private media, including Index, which accounted for about half of Hungary’s total page views of independent media until 2020, when Orbán-sympathetic businessman Miklós Vaszily purchased a controlling stake. Hungarian analysts warn the reality in their country does not line up with views traditionally associated with U.S. conservatism, including a defense of the free market.

Still, prominent figures with big audiences in the conservative movement, including Fox News’ Tucker Carlson, have either ignored or embraced these scandals and depicted him as a model leader. CPAC’s choice to collaborate with Hungary further cements the relationship between the America’s right wing and the authoritarian ruler.

Bulcsú Hunyadi, head of the Radicalisation and Extremism Programme at Hungarian think tank Political Capital, told Hatewatch in an email that Orbán’s mainstreaming of “populist radical speech” on “migration, LGBTQI and gender issues, opposition to liberal values [and] defending traditional ‘culture’” has been instrumental to his rise as a symbol of success for the international hard right.

Orbán’s rhetoric aligns with “current narratives and messages practically coincide with those of the European new right movement and the American alt-right,” the researcher continued, referring to an internet-focused rebrand of white supremacist ideology that emerged during Trump’s rise as a political figure.

The vanguard against Soros and migration 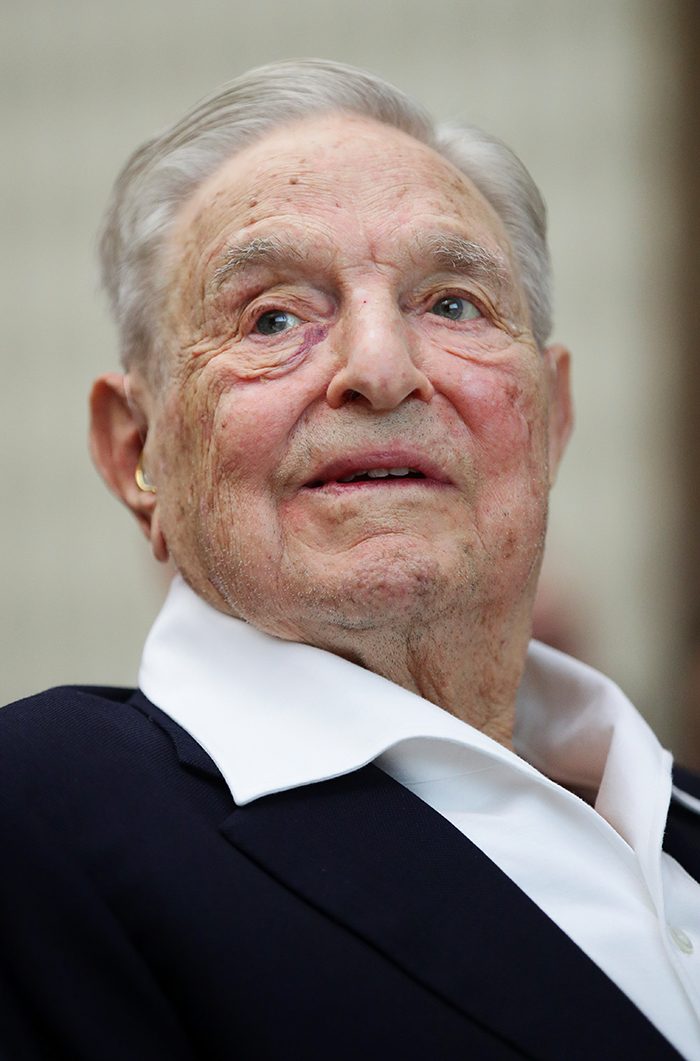 Orbán has helped shape U.S. hard-right narratives for nearly a decade. Since 2013, Orbán has positioned himself as a foil against George Soros, a Hungarian-American billionaire and financier of liberal nonprofits. Extremists of all kinds have contributed to turning Soros into a boogeyman for the right. They also drop his name into antisemitic conspiracy theories.

Orbán made Soros the face of Hungary’s migration crisis in 2015 when thousands of asylum seekers reached its borders. These migrants arrived amid a global migration crisis that affected nations in the Middle East, Turkey, the EU and its periphery, and the U.S.

Orbán’s party Fidesz began a campaign against Soros that mirrored the white nationalist narrative that Jewish people work to replace white people through migration, or the “great replacement.”

Orbán said at a 2019 international summit on family policy that if Europe will not “be populated by Europeans” would be a “population exchange, and there “are political forces in Europe who want a replacement of population for ideological or other reasons.”

Hungary started building a barrier on the Serbian border in 2015. Orbán depicted this and subsequent upgrades to the border barrier as defending “Christian” Europe.

Authorities also built detention centers for asylum seekers – largely from the Middle East – where authorities sometimes withheld food from those whose claims were denied. Hungary closed these centers in 2020 after the European Court of Justice (ECJ) ruled them illegal.

As Orbán railed against asylum seekers, hard-right outlets like WorldNetDaily, which has carried material written by white nationalists, and figures like Alex Jones made antisemitic, anti-Soros conspiracy theories mainstream. Former President Donald Trump ran on an anti-immigrant platform amid the ongoing crisis. Trump’s 2016 campaign ran on banning Muslims from the U.S. and building a wall on the U.S.-Mexico border. Trump’s campaign released an anti-Soros advertisement at the close of the race that critics described as antisemitic.

Hungary increased its anti-Soros rhetoric in 2017, ahead of 2018 parliamentary elections. Fidesz passed the “Stop Soros” laws in 2017 and 2018. These laws forced NGOs with foreign funding to register and levied a 25% tax on foreign donations to NGOs that total more than $24,000. The legislation also criminalized aiding migration.

Orbán is explicit in his reasoning for the anti-immigration policies. In a 2018 speech, he said: “We do not want our own color, traditions and national culture to be mixed with those of others.” He also called refugees “Muslim invaders” in a 2018 interview with German tabloid Bild. 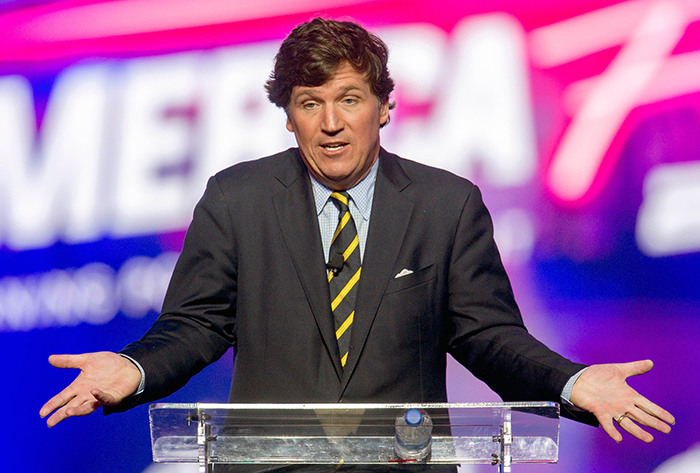 Fox News’ hard-right populist Tucker Carlson, the network’s most popular host, has done more to lionize Orbán to U.S. audiences in recent years than any other figure with a conservative audience. Carlson’s father works for a firm called Policy Impact Strategic Communications. They organized for Hungarian Foreign Minister Péter Szijjártó to appear on Carlson’s show. The Fox News host has twice flown to Hungary to present his program, and then broadcast from there across consecutive nights. Each time Carlson brings up Hungary on his show, he presents a one-sided, positive vision of Orbán and praises Fidesz policies.

Carlson also made an episode for his Fox Nation series Tucker Originals entitled “Hungary vs. Soros: The Fight for Civilization.” The episode focused on Hungary’s immigration policies and the “threat” of Soros. Standing at the border barrier – where authorities still use violent and illegal pushbacks of migrants – Carlson said migrants are “coached” by “Soros-funded NGOs” to enter Hungary.

Carlson praised the efforts of Hungarian border guards to stop immigrants, noting the barrier’s simple design of three parts and referencing the debate over how “high tech” the U.S. border wall should be.

“Hungary is a serious country that enforces its own laws,” Carlson said, disregarding ECJ rulings.

Carlson also lauded Hungary’s policies on marriage and families. To sustain a population, experts consider necessary 2.1 births per woman. The EU’s statistics bureau puts the region’s birth rate at 1.53 per woman as of 2019.

Fidesz has campaigned with an expansive family policy to incentivize childbirth. It emphasizes traditional roles for women, according to Human Rights Watch. HRW criticized the tone of the campaign as misogynistic. Hungary’s birth rate was 1.25 per woman in 2010, the year Orbán took office, and by 2019 it had risen to 1.49, according to the World Bank.

Hungary offers huge tax incentives and a stipend of over $30,000 for families of three – almost two years of the average Hungarian salary – to purchase a home. The government also offered cheap tax rates to first-time homebuyers.

Families can apply for an additional payout of roughly $1,200 for each child beyond three. Hungary has also waived personal income tax for mothers who have four or more children.

Orbán has said the policies are an alternative to replacing the dropping populations of Western states with immigrants.

Carlson said in the “Hungary vs. Soros” episode that Hungary is willing to “violate free market dogmas” to encourage Hungarian families. Hard-right operative Jack Posobiec, an extremist and disinformation specialist who has associated with foreign neo-fascists, praised the policies in 2019.

Hungary’s anti-immigration approach is among many in the EU and is not the most successful. France has the highest birth rate in the EU. It offers similar benefits but has done so far longer. It also provided greater childcare benefits as of 2015.

Although LGBTQ rights groups and the EU have widely criticized the laws as discriminatory, they align with U.S. hard right efforts to ban inclusive sex education in public schools. 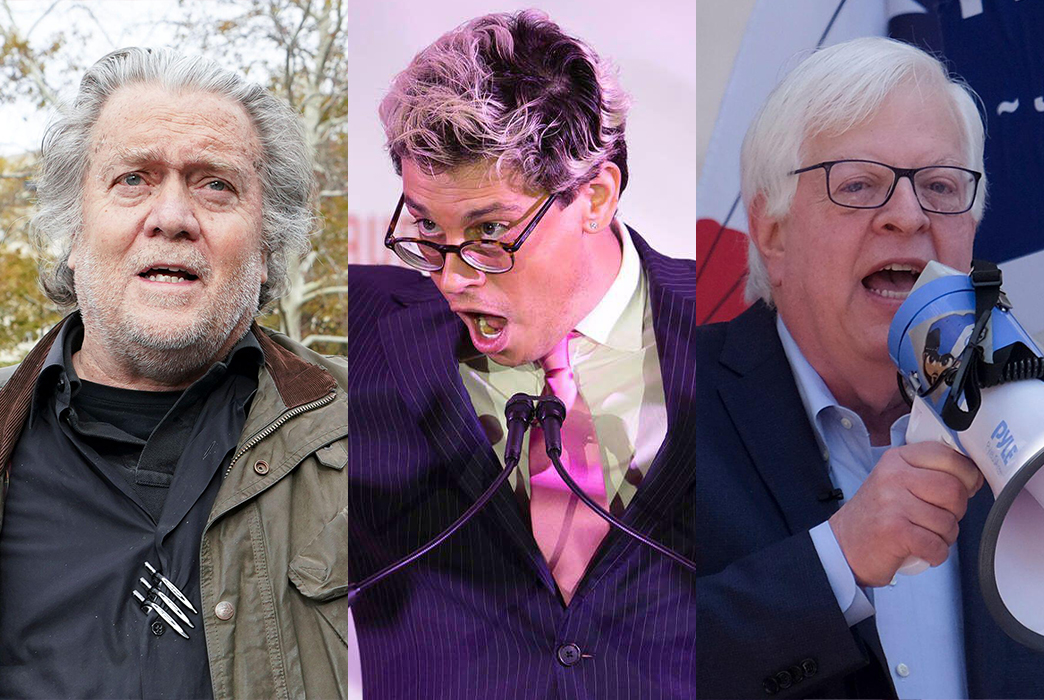 Left to right: Steve Bannon, talk show host and former White House adviser to former President Donald Trump, arrives at the FBI's Washington field office to turn himself in to federal authorities after being indicted for refusal to comply with a congressional subpoena over the Jan. 6 attacks on the U.S. Capitol in Washington, D.C., Nov. 15, 2021; Milo Yiannopoulos hosts a livestream of Republican congressional candidate Laura Loomer's win at the airport Hilton in West Palm Beach, Florida, Aug. 18, 2020; Talk show host Dennis Prager speaks at a rally calling for an end to the coronavirus-related closures, May 24, 2020. Photos by Alamy.

Hungarian extremism expert Hunyadi explained to Hatewatch that Orbán has raised Hungary’s profile among the hard-right partly by inviting high-profile figures on the U.S political right to speak in Hungary, including Steve Bannon, Milo Yiannopoulos and Dennis Prager.

Bannon, the former Trump adviser and head of Breitbart, applauded Orbán’s desire to create a “Christian democracy” rooted in “European tradition.” Bannon has attempted to unite Europe’s far-right parties in an electoral group called “The Movement.” Bannon wanted to headquarter the group in Budapest.

Hungary declined to join, and The Movement has failed in Europe.

There is cooperation between Budapest and Poland, Hungary’s closest ally in the EU.

Poland and Hungary say they “agree on 90% and 10%, [they] just leave out,” Rafal Pankowski, a Polish political scientist and co-founder of the Never Again Association, told Hatewatch in a phone interview.

Pankowski said PiS, which first won a majority in 2015, has possibly gone farther than Fidesz in a shorter time. Similar to Hungary, Poland has packed courts, consolidated control of media and eroded protections for LGBTQ people.

Pankowski said the “ten percent” about which Hungary and Poland disagree “means Russia.”

PiS solicits support from far-right antisemitic parties and formalized and protected the Independence Day march in 2021 after Warsaw authorities challenged it in courts.

Orbán banned it, saying it was “an attempt to breathe new life into Nazi and … fascist ideology.” Police apprehended Spencer at a bar during an informal white nationalist gathering.

Orbán pits Fidesz against Jobbik, a hard-right party with a history of antisemitic and hateful rhetoric that has attempted to liberalize since 2018.

Cracks in the facade

Hunyadi noted Hungary’s acceptance of EU aid, and many of its domestic policies, should give pause to U.S. conservatives who view small government favorably and distrust foreign aid.

These policies include Hungary’s near-total ban of homeschooling, an issue close to the hearts of many mainstream conservatives.

Furthermore, Hungary has relied heavily on EU funding for its economy. The EU Cohesion Fund, meant for poorer member states, has provided an average of roughly 3% of the Hungarian gross domestic product (GDP) for years, Zoltan Pogátsa, a Hungarian academic who focuses on the economics of EU integration, told Hatewatch in direct messages.

Some years, the fund has provided up to 7% of Hungary’s GDP, Pogátsa said.

Pogátsa said Fidesz does not currently need EU funding, due to the country’s post-COVID recovery creating an “overheated economy with high inflation.”

Once the recovery cools, Hungary will once again need EU support, Pogátsa said.

And the battles with the EU are catching up to the illiberal Hungarian-Polish alliance.

The ECJ ruled in February that future aid can be withheld over concerns about their democratic backsliding infringing on core EU tenants found in treaties to which all EU countries are party.

Hunyadi said it is important to know the “Hungarian government has put great emphasis on selling the brand ‘illiberal Hungary’ to traditional, conservative and radical and far right audiences across the globe.”

Without illiberal victories inside the EU, it is unclear what brand the Hungarian government could sell.

Hunyadi wondered how U.S. conservatives who venerate the legacy of former President Ronald Reagan and “highly value personal, political and economic freedoms, would assess the situation in Hungary if they had a full picture of … Fidesz’s tight control over the political, social and economic spheres in Hungary.”

The conservative movement’s hard right turn, and willingness to form alliances with Orbán and his allies, raises questions about whether they value such freedoms at all.