The conspiracy theorist and extremist Alex Jones must pay the families of Sandy Hook mass shooting victims almost $1 billion in damages for false claims that they were actors complicit in a hoax.

A Connecticut jury on Wednesday awarded a total of $965 million to plaintiffs in the case – family members of 20 students and six staff members of Sandy Hook Elementary School who were murdered in 2012. Jones must also pay legal costs for the plaintiffs, with that amount to be determined next month.

The verdict applies both to Jones and his company, Free Speech Systems LLC, which filed for bankruptcy last July. Through that company, Jones has controlled his stable of conspiracy theory outlets, including the Infowars website, Infowars broadcasts like the Alex Jones show, and the Infowars store, where listeners can buy Jones’s books, DVDs, and a range of supplements with names like ‘Alpha Power,’ ‘Brain Force,’ and ‘Survival Shield.’

The latest verdict comes after $49 million in damages was awarded to two other Sandy Hook parents in a separate defamation verdict in August in Jones’s home state of Texas.

The nine-figure damages were not out of step with the income Jones was able to generate from his disinformation empire, according to testimony in the Connecticut case. 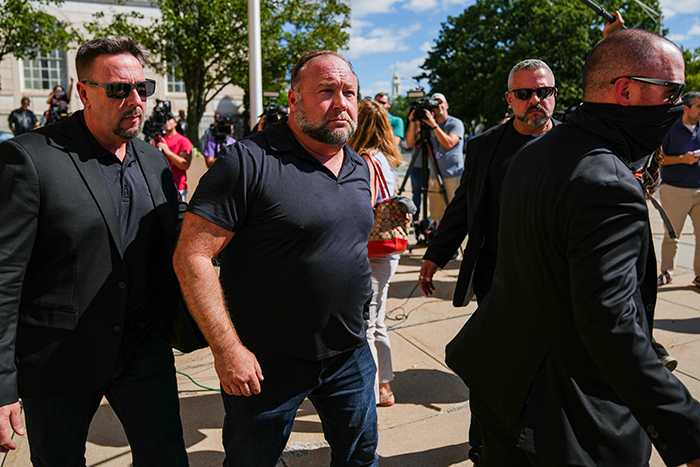 InfoWars founder Alex Jones outside Waterbury Superior Court during his trial on Sept. 21, 2022 in Waterbury, Connecticut. Jones has been ordered to pay nearly $1 billion to several victims' families for causing emotional and psychological harm after they lost their children in the Sandy Hook massacre. (Photo by Joe Buglewicz/Getty Images)

Court records show that Jones made some $165 million in sales on the Infowars store between September 2015 and the December 2018. An Infowars employee who testified in the case estimated Jones’s earnings since the shooting as being between $100 million and $1 billion. During the Texas trial, forensic economist Bernard Pettingill estimated Jones’ and his company’s combined net worth as being between $135 million and $270 million.

Hatewatch reported last May that an anonymous donor had given Jones Bitcoin worth some $8 million in separate donations over two preceding months.

During the trial, plaintiffs testified to years of lies from Jones and harassment and abuse from his audience, who believed the Infowars fabulist when he identified the parents of dead children by name, and said that they were “faking” their grief. Some were dealing with online hate as they prepared for their children’s funerals, according to their testimony.

In his own maneuvers in depositions and on the witness stand, Jones attempted to revise history, dismiss the consequences of his campaign of falsehoods, and minimize the wealth it had brought him.

In the decade after Jones began spreading untruths about Sandy Hook families, he made a transition from a fringe conspiracy broadcaster with ambiguous partisan loyalties to an influential stalwart of the pro-Trump far right.

From the beginning of his career in the late 1990s, Jones has always promoted far right antigovernment conspiracy theories scapegoating “globalists” and agencies like the United Nations and the Federal Emergency Management Agency. Each of the Clinton, Bush and Obama administrations was subject to his paranoid hostility.

Trump was the only president who commanded Jones’ loyalty, with each man apparently seeing opportunities in the other’s base of supporters. Erratic in private (in a leaked 2019 outburst he said “I wish I’d never fucking met Donald Trump”) he nevertheless gave Trump unflinching public support.

In 2013, Jones met Trump adviser and fellow conspiracy theorist Roger Stone, who brokered Jones’ relationship with Trump, and later joined Infowars as a broadcaster. In December 2015, Jones conducted an on-air interview with then-candidate Trump, who praised the broadcaster’s “amazing reputation.”

In the lead up to the Jan. 6, 2021 assault on the United States Capitol, Jones promoted the false claim that Trump had been the victim of a stolen election, leading to a spike in traffic to the Infowars store.

Jones responded to the verdict by crying poor. On Wednesday he told his audience that there “ain’t no money” to pay the damages awarded. Later that day he called in to Steve Bannon’s livestream and told him “It’s like if I have three gallons of blood in my body, or two gallons, they want five hundred gallons.”