As the nation heads into the first presidential election since the U.S. Supreme Court gutted a key provision of the Voting Rights Act of 1965, more than 500 people gathered in Minneapolis last night for a screening of the Southern Poverty Law Center’s voting rights documentary, Selma: The Bridge to the Ballot.

U.S. Rep. Keith Ellison (D-Minn.), SPLC President Richard Cohen and Pam Horowitz, attorney and wife of late civil rights activist Julian Bond, participated in a post-screening panel discussion about voting rights. Their remarks and audience questions also focused on social justice issues, such as the reform needed after the recent killings of black men by police in Minnesota and Louisiana. 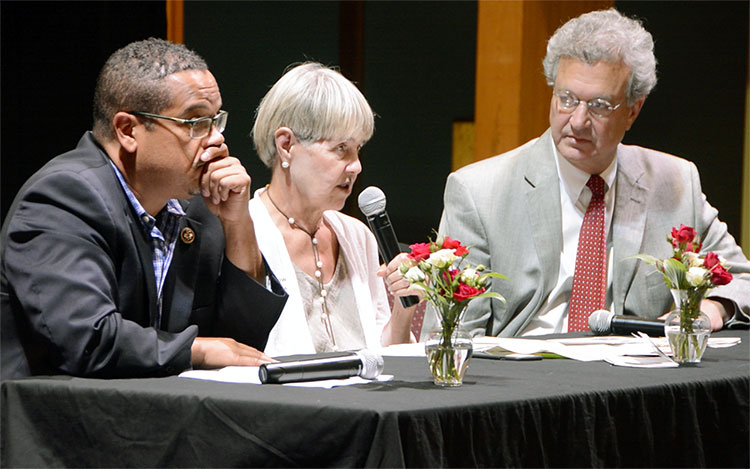 The free screening at the Lake Harriet United Methodist Church, an event co-host, provided a powerful reminder that more needs to be done to ensure voters have equal access to the ballot box.

People need to “connect on a human level and turn up to vote,” Ellison said.

In 2014, voter turnout nationwide hit a 72-year low. A year earlier, the Shelby v. Holder decision by the U.S. Supreme Court rolled back 50 years of voting rights progress in 34 states by invalidating a key provision of the Voting Rights Act. State and local officials are now no longer required to seek federal permission to change voting laws. A variety of voter suppression laws have been enacted in a number of states.

During the event, a voter registration drive was held. Community groups, which included the League of Women Voters Minnesota and NAACP-MN, attended the event.

Despite setbacks for voting rights, Cohen said progress has been made since the events of the film, which chronicles the heroic teachers and students in Selma, Alabama, who sparked the voting rights movement leading up to the historic Selma-to-Montgomery march of 1965. The nation, however, must still come to terms with its deep ties to racism and address the current landscape where many states are blocking equal access to voting.

“In the film, President Johnson talks about the legacy of bigotry in our country,” Cohen said. “I think if we were honest with one another, we would say the legacy in many ways is still with us.”

Panelists reminded the audience about the parallels between the struggles in the film and current events. Ellison noted recent efforts by Black Lives Matter to call attention to racial injustices in Minneapolis after the shooting death of Philando Castile by a police officer. The nation needs to work to promote equal justice, Ellison said.

Horowitz reflected on a conversation she had with her husband about Black Lives Matter before he passed away last summer. “He supported it,” she said. “He saw SNCC (the Student Nonviolent Coordinating Committee) in Black Lives Matter.”

Bond, who served as the SPLC’s first president, helped establish SNCC in the 1960s.

More than 43,000 copies of the Teaching Tolerance documentary, which is narrated by Academy Award-winning actress Octavia Spencer, have been distributed to classrooms and educators nationwide. Civic groups and educators can host screening events by requesting a copy of the film and companion teaching guide here.